A little over a year after establishing a stake in Domino’s Pizza Inc. (

The guru’s New York-based hedge fund is known for taking large positions in a handful of underperforming companies and pushing for change in order to unlock value for shareholders. While he has found success with Chipotle Mexican Grill Inc. (

CMG, Financial) and Starbucks Corp. (SBUX, Financial) in recent years, one of Ackman’s most well-known activist targets, which did not end well for him, was Valeant Pharmaceuticals. He also pursued an unsuccessful short of Herbalife Nutrition Ltd. (HLF, Financial), which he bowed out of in 2018.

After reducing the position by 0.32% during the second quarter, GuruFocus Real-Time Picks, a Premium feature based on 13D and 13G filings, showed he sold the 2.06 million remaining shares of the Ann Arbor, Michigan-based company on July 25. The transaction had an impact of -10.76% on the equity portfolio. The stock traded for an average price of $387.99 per share on the day of the sale.

GuruFocus estimates Ackman gained 4.20% on the investment, which was established in the first quarter of 2021 and was previously his sixth-largest holding.

Domino’s, which operates a chain of pizza restaurants around the world, has a $14.14 billion market cap; its shares were trading around $394.15 on Wednesday with a price-earnings ratio of 30.78 and a price-sales ratio of 3.26.

The GF Value Line suggests the stock is modestly undervalued currently based on its historical ratios, past financial performance and analysts’ future earnings projections. 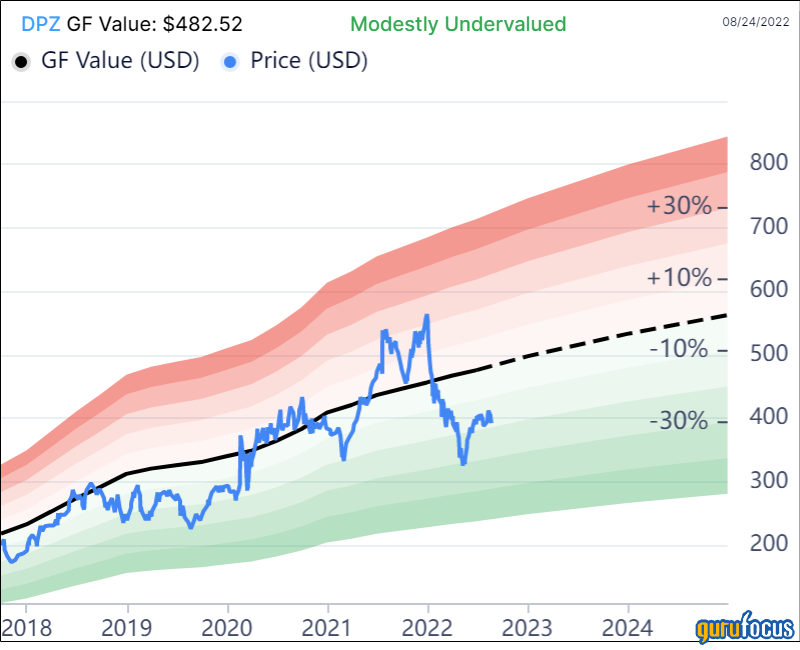 Additionally, the GF Score of 92 out of 100 indicates the company has high outperformance potential going forward. It received high points for profitability, growth and GF Value, a middling mark for momentum and a low grade for financial strength. 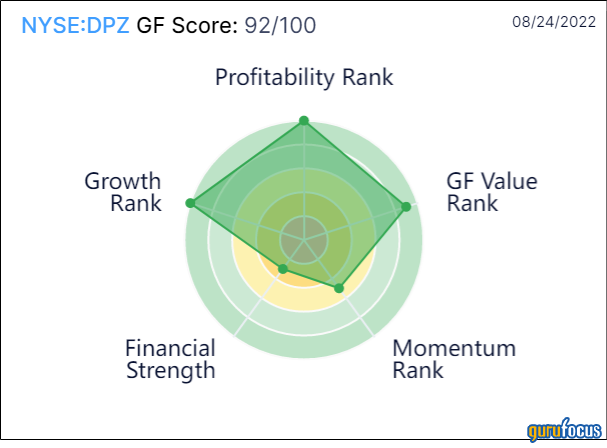 On July 21, Domino’s reported its second-quarter 2022 financial results. The company posted adjusted earnings of $2.82 per share on $1.07 billion in revenue, which grew 3.2% from the prior-year quarter. While sales beat Refinitiv analysts’ expectations of $1.05 billion, earnings fell short. 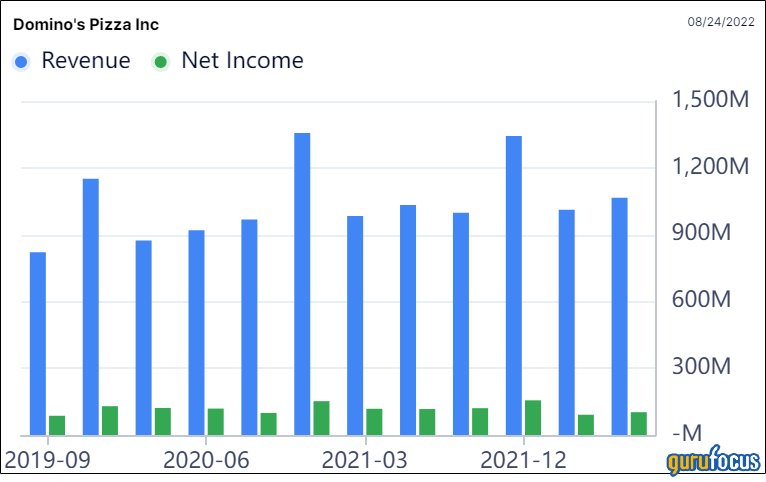 Further, same-store sales declined 2.9% in the U.S. and fell 2.2% internationally.

Despite the disappointing quarter, Ackman noted in his semiannual letter that Domino’s “near-term business performance has shown meaningful improvement,” which included three-year stacked growth of 17% in the U.S. for the second quarter.

“This improvement was driven by the full impact of its recent pricing actions, operational changes leading to improved staffing and labor utilization, and the return of its signature Boost Week promotion,” Ackman wrote. “These positive developments caused a significant recovery in Domino’s share price and its valuation increased to more than 28 times our estimate of next 12 months’ earnings.”

As a result of Domino’s “relatively high valuation in the context of a volatile market environment,” Ackman and his team decided to exit the investment in order to pursue other opportunities.

“We have enormous respect for Domino’s and its management team led by Russell Weiner, and we expect the company to continue its long track record of success,” he concluded.

Weighed down by low interest coverage, GuruFocus rated Domino’s financial strength 3 out of 10. The Altman Z-Score of 2.32 also indicates the company is under some pressure due to a slowdown in revenue per share growth. The return on invested capital, however, eclipses the weighted average cost of capital, meaning value is being created as the company grows.

The company’s profitability scored a 10 out of 10 rating, driven by strong margins and returns on equity, assets and capital that outperform a majority of competitors. Domino’s also has a moderate Piotroski F-Score of 5 out of 9, indicating operations are typical for a stable company, and a predictability rank of five out of five stars. GuruFocus research found companies with this rank return an average of 12.1% annually over a 10-year period.

Of the remaining gurus invested in the company as of the end of the second quarter,

The majority of Ackman’s $7.46 billion equity portfolio, which the 13F filing showed was composed of seven stocks as of June 30, is invested in the consumer cyclical sector. The real estate and industrials spaces have much smaller representations.

The guru’s other holdings as of the end of the second quarter were Lowe’s Companies Inc. (

Investors should be aware that 13F filings do not give a complete picture of a firm’s holdings as they only include its positions in U.S. stocks and American depository receipts, but the reports can still provide valuable information. Further, the reports only reflect trades and holdings as of the most-recent portfolio filing date, which may or may not be held by the reporting firm today or even when this article was published.