Nike: The Market Is Still Offering a Good Entry Point

A look at why investors should consider the sports apparel manufacturer

NKE, Financial) is down marginally since late May when I wrote that the steep decline in the share price made the stock look more attractive. The 37% decrease in value year to date has been painful for shareholders, but Nike remains one of the best companies in its industry, backed by powerful brands and strong fundamentals.

The stock trades at a large discount to its intrinsic value and is projected to see a return to high growth in the near future. The company also has multiple decades of dividend growth. Let’s look closer at Nike to see why the stock could be presenting an excellent entry point.

Nike has one of the most recognizable brands in the world. The company routinely sits near the top of most valuable brands list and is often the lone apparel company to do so. This is because Nike’s reach is extensive, driven by key partnerships with top athletes and a healthy advertising budget that is typically around $4 billion annually.

Partnerships and advertising have allowed the company to grow into a $163 billion behemoth, often dwarfing the competition. For example, competitors Adidas AG (

ADDYY, Financial) and Under Armor Inc. (UA, Financial) have market capitalizations well below that of Nike.

The most recent quarter was somewhat mixed. Revenue did fall 0.9% to $12.23 billion, but this was primarily due to a strong U.S. dollar. Further, results were still $140 million above Wall Street analysts had anticipated. Adjusting for currency exchange, sales were up 3% for the quarter. Net income improved 5% to $1.4 billion, but earnings per share fell from 93 cents to 90 cents. This was still 9 cents ahead of expectations.

The company did have some weak spots in the quarter, particularly in North America, which saw a 5% sales decline, and Greater China, was which lower by 19%. Results were impacted by supply chain constraints in these regions and, in the case of China, Covid-19 restrictions.

Elsewhere, results were pretty positive. Gross margins for the year expanded 120 basis points to 46% as discounted items were limited amid high consumer demand. Wholesale was down 1%, but most other channels showed growth. Nike Direct grew 14%, with Nike Brand digital sales higher by 18%. Company-owned stores were up 10%. By regions, Asia Pacific and Latin America grew 15% and Europe, Middle East and Africa was up 9%.

Nike might not show significant earnings growth until 2024, but the stock is still one of the highest rated in its industry. 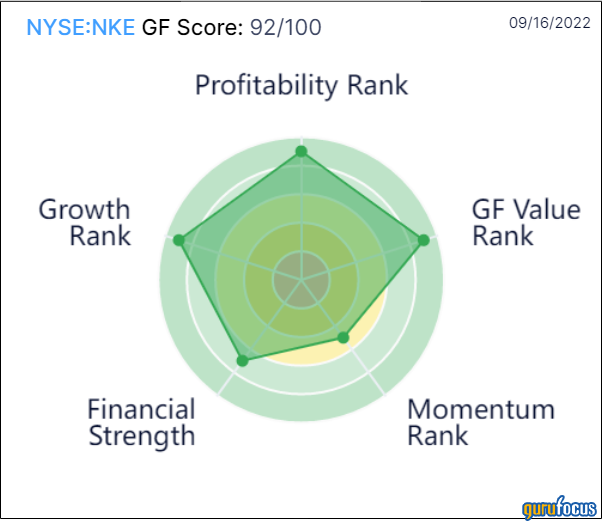 The company has the potential for outperformance based on its GF Score of 92 out of 100, due to high marks in the areas of profitability, financial strength and growth. 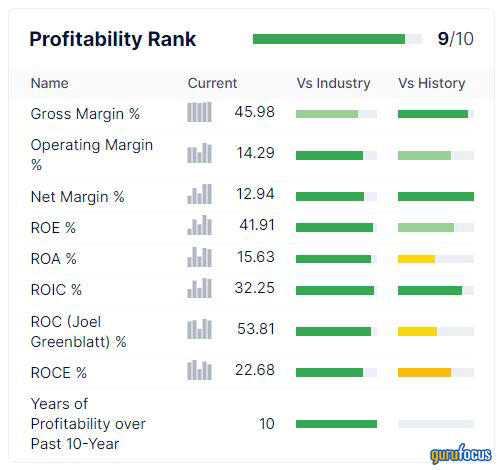 Nike scores a 9 out of 10 on profitability from GuruFocus. As discussed above, the gross margin is extremely high and is better than three-quarters of the apparel industry. The most recent result is near the very high end of the company’s 10-year history. Consumers are willing to pay full price for Nike’s products, which should provide support for elevated gross margin.

The high ranking on profitability also takes place on the back of high returns on equity, assets, invested capital and capital employed. All scores in these areas best at least 92% of peers. Nike has had 10 consecutive years of profitable results, which is better than 99.91% of the competition and shows how well the company’s products appeal to consumers. 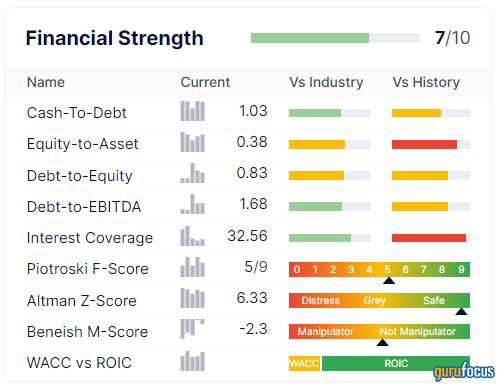 The company’s financial strength rating is a solid 7 out of 10, helped immensely by a return on invested capital of 32.3% that greatly outweighs Nike’s weighted average cost of capital of 7.2%. Nike is one of the best at getting a strong return on its invested dollar. Debt has increased greatly in the last few years, but the company has a very high interest coverage, was is above 75% of the industry. As a result of higher debt, the debt-to-equity ratio is below two-thirds of the peers and the cash-to-debt ratio is near the low end of Nike’s performance over the last decade. 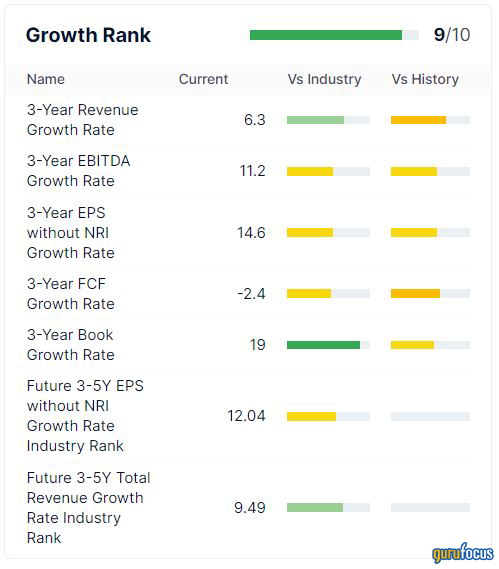 Nike’s growth rank is 9 out of 10, with three-year book growth and three-year-revenue growth being the primary reasons for the high ranking. Almost everywhere else the company has middle of the pack showings. The lone exception is future revenue, as the company is expected to see growth of close to 10% for the next three to five years. Future earnings per share growth is forecasted at 12%, which would match the compound annual growth rate over the last decade for the company.

Shares of Nike yield a paltry 1.1%, trailing even the 1.6% average yield for the S&P 500. Most investors likely hold the stock because of its growth potential as shares are up nearly 100% over the last five years even after the decline in price since the start of the year.

Still, the income aspect of Nike is important as the company has shown it can raise its dividend regardless of economic conditions. The company’s dividend growth streak stands at 20 years. The last decade has seen the dividend experience a CAGR of 12.2%, which is very much in line with earnings growth. The company raised its dividend 10.9% for the Dec. 28, 2021 payment date.

Last fiscal year, the company distributed dividends of $1.16 per share, equating to a payout ratio of 32%.

One more area of concern is the company’s debt levels and what impact that might have on the ability to continue to pay and raise the dividend.

Nike’s weighted average interest rate would have to reach above 22.1% before free cash flow was unable to cover dividend distributions. With such a low rate at the moment, it seems highly unlikely that debt obligations will negatively impact Nike’s dividend in the near future.

The retreat in the stock price means Nike is now trading at a substantial discount to its intrinsic value according to the GF Value chart. 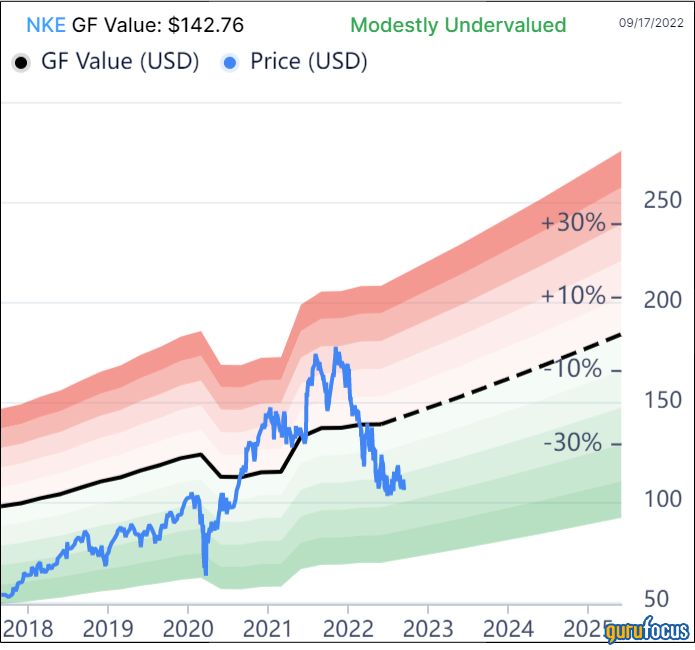 Nike closed Friday’s trading session at $104.44. Currently, the stock has a GF Value of $142.76, resulting in a price-to-GF Value ratio of 0.73. Reaching the GF Value would mean a 37% gain in the share price. The stock is rated as modestly undervalued.

Nike's last quarter was mixed, but the company still managed to grow compared to the prior fiscal year. The company continues to enjoy high levels of consumer demand despite weakness in certain regions. Analysts do not expect much growth in the coming fiscal year, but Nike is projected to return to its more usual high growth nature after that.

Looking beyond just recent results, Nike’s GF Score shows that it has the potential to provide a sizeable return, something that is backed up by the stock’s GF Value. The company is highly rated against peers on a number of important metrics. The dividend may not be generous, but the dividend growth streak and CAGR are impressive.

Given the strength of the company’s metrics and its industry-leading position, it could be the market has mispriced shares of Nike based on short-term results. This could provide the opportunistic investor with a good entry point into the name.