FedEx Needs to Focus Under the Hood

FDX, Financial) saw its stock drop to its worst decline in 40 years after some rather depressing earnings results and guidance. The new CEO's strategy to cut expenses and increase shipping rates has done little to bolster investor confidence. While a big part of the reason is undeniably a weakening economy, rising interest rates and inflation, I believe FedEx's struggles are not limited to broader economic issues; it also needs to fix its operational problems.

Wall Street is not biting, though. There was a small bump in the share price after the company announced disappointing fiscal first-quarter earnings, but shares promptly retreated. 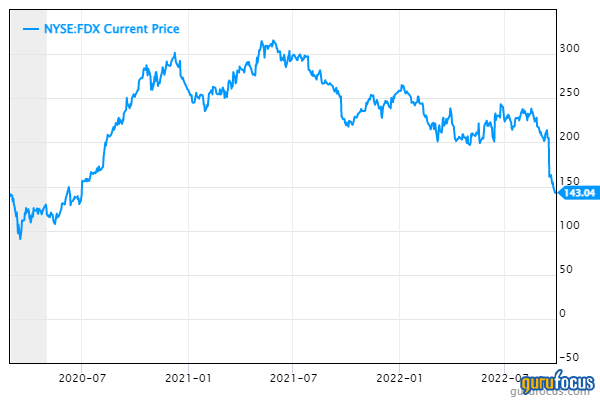 After a very upbeat investors' meeting earlier this year, FedEx bulls were on the cloud line. However, they have been promptly brought back to earth after a series of pessimistic announcements that have turned sentiment bearish.

The biggest news to come out recently was Subramaniam stating that a global recession is around the corner. In response, the company is trying to streamline its operations. As one of the biggest steps, FedEx is closing down 90 of its 2,200 locations. In addition, the company is reducing flight frequencies and temporarily parking its fleet while other facilities are closed or operations are moved elsewhere.

While these measures may be necessary, management also needs to acknowledge that its problems are far more deep-seated. Its operating units are suffering and have been doing so for quite some time. These issues have very little to do with the broader macroeconomic environment. These shortcomings are what the company will have to fix for there to be a turnaround.

FedEx is making a habit of restating guidance

FedEx provides a wide range of services, including package shipping, freight shipping, e-commerce fulfillment and more. Shipping is just one of the many services provided by FedEx. It also offers tracing, customs clearance and insurance.

However, despite its wide range of products and the relative predictability of its businsses, FedEx has cultivated a habit of adjusting forecasts and guidance. In the last full fiscal year before the pandemic hit, it reported guidance and made two adjustments to the forecast: upward and downward. It then cut guidance twice. A similar situation occurred in 2018. Surprisingly, for nine out of the 10 years of applying an earnings per share goal each year, FedEx has had to lower its target at least once.

The major issues for the company are coming from two business segments, which also happen to be the company's biggest money spinners. The first is the FedEx Ground Unit, and the other is the Express Unit.

What is going wrong at these two business units?

FedEx's Ground Unit is one of the most popular offerings on the company's program. FedEx Ground ships packages of all sizes to destinations across the United States, offering competitive pricing and transit times. In addition, FedEx Ground provides tracking and insurance for all shipments. To complete these tasks, FedEx Ground has signed 6,000 delivery contractors.

Hiring an independent contractor instead of a full-time employee can come with its benefits. However, in recent quarters, the unit has suffered from high contractor turnover. It is also suffering from declining margins since 2012.

The FedEx Express Unit is also not doing too well. FedEx Express is one of FedEx's many companies that provide courier and mail services worldwide. With the use of express deliveries and couriers, these services have become more widely available. FedEx Express is the largest division of FedEx, accounting for approximately 60% of its revenue and operating more than 650 aircraft.

Despite its long history, the FedEx Express Unit is not known for its profitability. It is a capital-intensive business, which means that it requires a lot of money to get started and maintain operations. The high cost of doing business makes it difficult for the unit to compete against other express transportation companies, such as UPS (

UPS, Financial) and Deutsche Post AG's (DPSGY, Financial) DHL. As a result, FedEx Express Unit has struggled to generate profitability and has often been a drain on the resources of the overall company. It is clear that the FedEx Express Unit will need to make some significant changes to succeed in the future.

There are several options to consider to solve the issues identified, but merging the two units is one of the most popular suggestions. UPS employed a similar strategy and is finding a lot of success with a streamlined model. Despite facing similar macroeconomic pressures, UPS has reaffirmed its guidance for 2022 and intends to hire 100,000 seasonal employees this winter. This is why I believe a merger of its two underperforming units might be what FedEx needed to get itself back on track.

FedEx is one of the largest shipping companies in the world, so when it voices concerns about a possible global recession, people tend to listen. And there is no doubt that the current economic situation is precarious, with many experts predicting an imminent downturn. FedEx is not the only company that has been sounding the alarm bells. Several large corporations have recently come out with statements expressing concern about the state of the global economy.

While FedEx's concerns over the economy are certainly valid, it's important to remember that it is not alone in this regard. All companies are facing a difficult macro environment, and not all are donig as badly as FedEx. FedEx's problems cannot be blamed solely on the economy. The company has been suffering for several years with a margin decline and a clunky business model. FedEx is also facing competition from rivals such as UPS and DHL, encroaching on its core businesses. To avoid losing market share, FedEx will need to find a way to fix its operational inefficiencies.