ABNB, Financial) was founded during the recession in 2008 by Brian Chesky and two friends. The company had humble beginnings as the founders started off by renting “Airbeds” in their apartment to help cover their rent. Since then, the company has grown to offer a leading digital platform connecting hosts to guests around the world.

When the company saw a temporary 80% drop in its business during the travel lockdowns of 2020, Chesky reignited his “startup style” of leadership with a series of updates and a more focused strategy for the business. Chesky believes that people will certainly flock to this method of earning extra cash during a recession, which could boost the number of hosts on the platform.

I believe the comany has great opportunities ahead of it, so in this article, I will go over why I believe Airbnb is so special, as well as its new features, financials, and valuation; let’s dive in.

What makes Airbnb so special?

Airbnb is one of the largest travel companies in the world, but it owns no hotels or apartments directly, as the company offers a digital platform to customers instead. The business operates as a two-sided marketplace that enables property owners ("hosts") to generate extra cash by renting out their homes or spare rooms to "guests."

The guests get to choose from a massive range of diverse properties. Hotels get the job done, but they are only available in areas where there is high demand, and even then, the accommodations might be pretty boring if it's not a resort town. Airbnb properties can be pretty much anywhere from a secluded forest treehouse to a desert villa. Hotels also tend to only offer guests a single room or tiny suite, whereas most Airbnb properties offer the whole home or apartment, which includes kitchen, dining, etc. (though you may have to share the living spaces). One thing Airbnb is really leaning into to drive revenue growth is luxury rental offerings to provide the best experiences for guests.

Therefore its no surprise that the company has grown extremely fast over the years, but it hasn’t always been smooth sailing. In 2020, the Covid lockdowns sent Airbnb’s business into turmoil, and I believe this was a key driver for the business to go public on the stock market. This was a smart move by the business as it went public at a fairly high valuation of ~$120 billion thanks to the strong market bubble for tech stocks at the time.

Since that point, its stock price has declined by 47%, despite the company recovering well and seeing record travel seasons in 2021 and 2022. 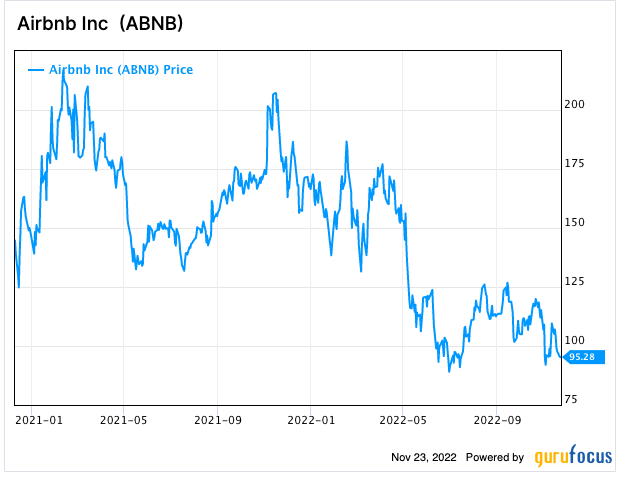 Airbnb generated solid financial results for the third quarter of 2022. Revenue was $2.88 billion, which rose by a rapid 29% year over year and surpassed analyst expectations by $36 million. 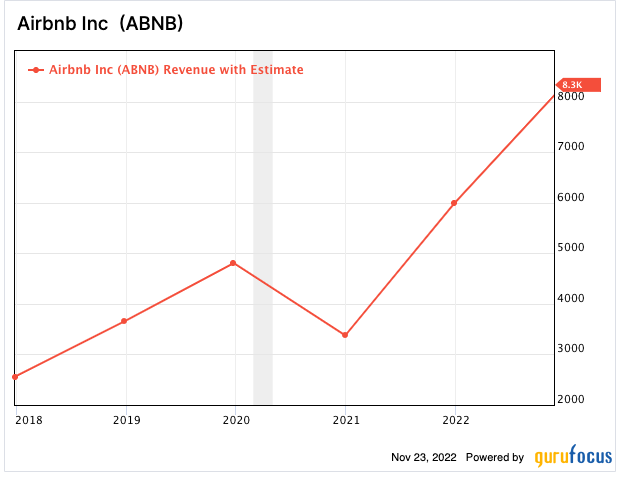 These strong financial results were driven by the huge pent-up travel demand. During 2020 and early 2021, Airbnb saw a rise in domestic travel and a favorable increase in people seeking countryside accommodation. However, in 2022 travel was firing on all cylinders as city breaks boomed in popularity and more customers were travelling, according to Airbnb’s third-quarter earnings call. City bookings increased by a rapid 27% year over year and international bookings jumped by 58% year over year.

Airbnb reported a record 100 million nights and experiences booked, which increased by 25% year over year. In addition, gross booking value for stays increased to a staggering $15.6 billion up over 30% year over year.

Since the pandemic began, Airbnb’s founder has whipped the company into shape with a fresh strategy and new product feature rollouts.

In the summer of 2022, Airbnb announced its new "Airbnb Categories” page, which is designed to inspire travelers. This feature gives users to ability to easily see captivating treehouses, castles, beach houses and even desert homes. I believe this strategy makes sense for the company as it further highlights the differentiated value proposition of Airbnb relative to traditional hotels.

Airbnb also launched AirCover, which is the world's most comprehensive travel insurance policy and is free for customers. One of the main reasons people prefer to book hotels over Airbnb is the peace of mind you get when booking a hotel. Remember, most Airbnbs are run by property owners who are not professionally trained hosts and may not want to spend their free time making sure guests have the best experience. This means if you turn up at midnight at an Airbnb, the host may not answer the phone and you would be stuck. However, Airbnb’s AirCover helps this problem with its rebooking/refund guarantee and help line.

In mid-November 2022, Airbnb announced a variety of new protection for hosts. This includes the ability to connect with a “Superhost” to help you set up your home easily, in additon to identity verification and $3 million in AirCover damage protection.

Chesky even posted a video claiming he is hosting a room in his house on Airbnb. With a net worth of $7.5 billion, Chesky doesn’t need the extra cash anymore, but by putting his home on Airbnb, he aims to better relate to hosts and drive trust in the business model.

Airbnb reported record profitability in the third quarter of 2022. Net income was $1.2 billion, which increased by $400 million year over year at a solid 42% margin.

Earnings per share was $1.79, which surpassed analyst consensus expectations by $0.29. 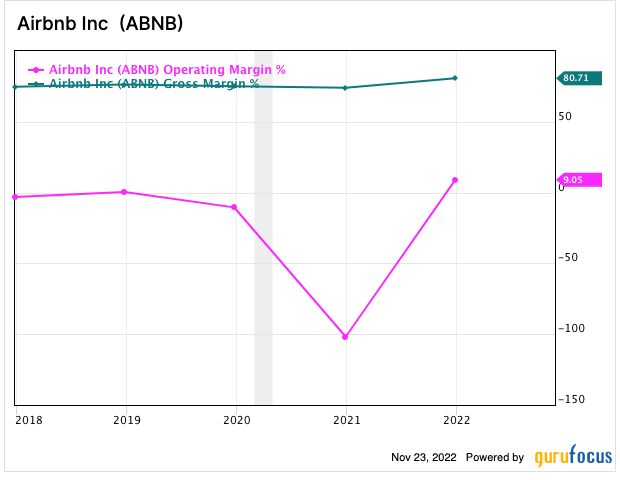 Over time, I expect the company’s margins to increase as Airbnb reported that over 90% of its website traffic is direct to Airbnb’s website. This means the company doesn’t need to pay much to acquire its users, having previously invested a lot into building its brand. Investing in building a brand is a long term tactic and the payoff is uncertain, but companies that master this tend to be very successful.

Airbnb also has a fortress balance sheet with $9.6 billion in cash, cash equivalents and short-term investments compared to just $1.9 billion in long-term debt.

Airbnb is a tremendous company, but its valuation has always been an issue for me in the past. At the time of writing, Airbnb trades at a price-earnings ratio of 37, which isn’t exactly cheap given the current market situation. The company does trade at a price-sales ratio of 7, which is cheaper than historic levels.

Relative to competitors such as Booking Holdings (

BKNG, Financial) and Expedia (EXPE, Financial), Airbnb does trade at a slightly higher valuation. However, I believe Airbnb’s value proposition is more unique and its brand stronger. 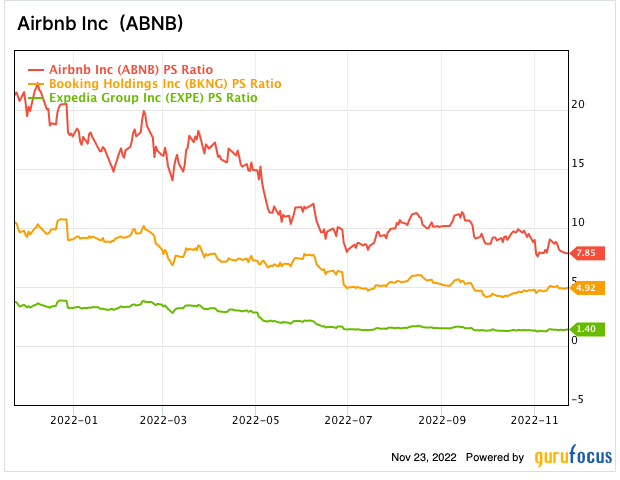 George Soros (Trades, Portfolio) increased his position in Airbnb by over 30% in the third quarter of 2022 based on his firm's latest 13F report. During the quarter, shares traded for an average of $110 apiece. At the time of writing, Airbnb trades at ~15% cheaper than this average price.

As shown in the chart below, there was an equal number of gurus buying and selling the stock in the third quarter after a spike in buying in the second quarter.

Airbnb has a strong brand and a solid two-sided marketplace business model. Its asset-light nature is enticing to investors, and founder-led companies tend to perform strong long term. I do expect some volatility within the next year, but in the long term, I believe Airbnb looks to be in a solid position.