Why Whitney Tilson Is Loading Up on Berkshire Hathaway

Tilson has increased his exposure to Berkshire by 37% to 8.28% of his portfolio

Bram de Haas
Bookmark
Whitney Tilson (Trades, Portfolio) is founder and managing partner of Kase Capital Management, a collection of value-oriented hedge funds. Tilson is also the chairman, co-founder and co-editor of Value Investor Insight, a value investor newsletter. He is rightfully considered a value investing guru having co-written two books on the subject (I own one, and it is really good) and having contributed countless articles to the value investment literature.

I try to at least look at his holdings every time a new 13-F comes out, and this time it is interesting to see how much he is racking up his exposure (added 37%) to the

Warren Buffett (Trades, Portfolio) managed Berkshire Hathaway (BRK.A, Financial) (BRK.B, Financial). What brought him to up his stake to 8.28% of his portfolio? I have no doubt Tilson has studied Berkshire and Buffett over his entire career and to see him allocate so much of his portfolio to the insurer makes me seriously consider buying shares myself. We are quite lucky that Tilson is so public about his investment, and he actually published a presentation specifically about Berkshire Hathaway which helps a great deal to understand his rationale.

In a nutshell Tilson views Berkshire Hathaway as a safe, high-quality, growing company with 42% upside in 12 months. These days Berkshire Hathaway is the 15th-largest company in the world and the fourth-largest in the U.S. based on revenues. It is overseen by the most successful investor of all time

There is one specific reason why Tilson loves Berkshire, and it is the accounting treatment of the Kraft-Heinz investment. Back in 2013 Berkshire bought $8 billion of Heinz preferred stock and $4.25 billion in equity. This investment is actually carried on Berkshire's balance sheet as “Investments in The Kraft Heinz Company."Â It is accounted for using equity accounting. It is carried at about ~$11 billion which is far less than it is worth. In 2015 Heinz merged with Kraft. Berkshire took this opportunity to put another ~ $5 billion in the newco. The sum of these transactions is that Berkshire ended up with $8 billion of preferred stock and 325 million shares in the new Kraft Heinz (

KHC, Financial) company. Since Tilson did his calculations the shares have declined a hair in value, but his reasoning holds up reasonably well. According to his numbers the balance sheet understates the value of these holdings by $9,756 per A share.

Other than that Tilson’s valuation is fairly simple. He simply takes investments/share and adds the value of the operating businesses based on what he perceives as a conservative multiple of its normalized earnings. With intrinsic value growing an estimated 8% over the next 12 months that gets him to an intrinsic value of $305.000 per A share in 12 months.

A very interesting slide in his presentation is the one below where he shows how Berkshire is slowly becoming less of an investment company and more of an operating business. That is relevant because Buffett tends to talk about Berkshire’s value in terms of its book value. Investments are valued at book but operating companies tend to be worth over 1x book. The average book value multiple for the Standard & Poor's 500 is 2.8x for example. Insurance is an important part of Berkshire, and that is an industry that tends to trade fairly close to book value, but Berkshire also owns lots of consumer brand companies which tend to be worth a high multiple to book value. 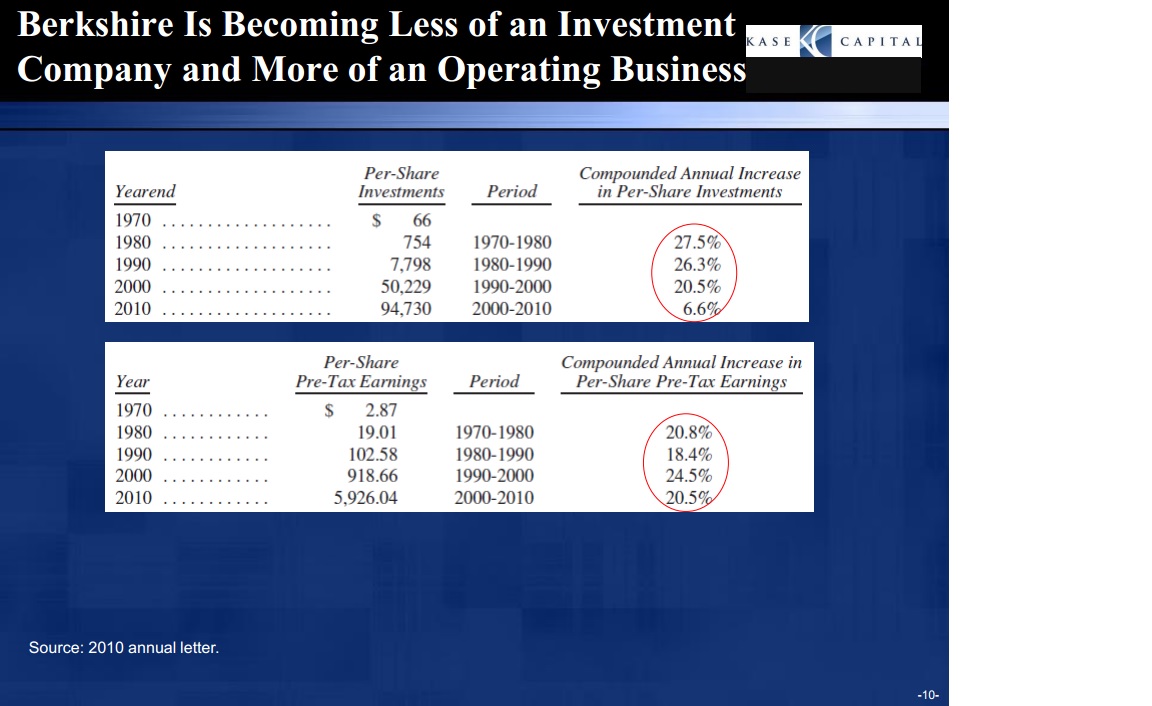 As much as we all love

Warren Buffett (Trades, Portfolio) because of his respectable age (85), people increasingly bring up the subject of Buffett leaving the firm for whatever reason. Tilson discusses the subject and views it as only a small risk. He is 80% sure that Buffett will run Berkshire for the next five years and thinks there is a 50% chance he is still at the helm in 10 years. Tilson’s 42% upside calculation assigns zero value to the Buffett premium which is a mistake in my opinion. Buffett still deserves to command a premium although not a super large one because there is not as much runway left for him to work his compounding magic.

Finally, Tilson just likes the safety of Berkshire’s huge cash hoard, the quality of the businesses it holds. Its resilience during downturns (a factor that is often touted by gurus holding Berkshire) and the conservative way it is managed. Not insignificantly Buffett has repeatedly stated he will buy back stock if it drops below 1.2x book value while it is now at 1.4x book value. That adds tremendous protection on the downside.

Also check out:
Not a Premium Member of GuruFocus? Sign up for a free 7-day trial here.
Rating: 5 / 5 (6 votes)
Write for GuruFocus
Submit an article
How to use GuruFocus - Tutorials What Is in the GuruFocus Premium Membership? A DIY Guide on How to Invest Using Guru Strategies GuruFocus New Features