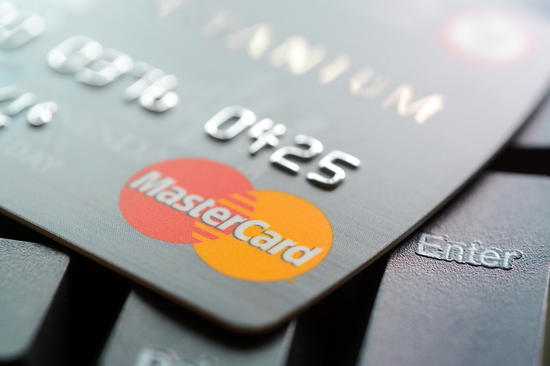 The guru’s Oregon-based firm seeks to invest in “compelling, undervalued” companies that have, among other attributes, strong or improving fundamentals, consistent operating results, a significant competitive advantage, understandable products and a demonstrated ability to earn a high return on capital.

In his quarterly commentary, Auxier discussed the headwinds that resulted in “a corrective third quarter” and shortages in both labor and goods. Among these are the Covid-19 pandemic, the Chinese government’s crackdown on tech companies and the Federal Reserve’s monetary policies.

Regardless, Auxier noted “there is good value in smaller and midsized businesses with high integrity management teams.” He continued:

“Most businesses we talk to are seeing robust demand, strong pricing and good margins. Inflation appears to be up across the board with labor increasing 3.5%. For restaurants, wages are growing around 5.5% and over 10% in hospitality. Government mandates for vaccines and green energy are adding to the shortages for labor and fossil fuels. The service side of the economy is very robust. Companies with strong franchises are able to raise prices and so far, the customers are paying up. Inflation seems to be more persistent as wages are hard to retract and we are seeing rents, which are a large part of the consumer price index, showing double-digit increases coast to coast. Companies that are executing with proven business models have been rewarded with huge premium valuations. However, higher inflation historically acts to compress valuations for all stocks, especially those speculative names with little earnings.”

Keeping these considerations in mind, Auxier established three new positions during the three-month period ended Sept. 30, eliminated a stake and added to or trimmed a slew of other existing holdings. Among the most notable trades were new investments in Grand Canyon Education Inc. (

LOPE, Financial), allocating it to 0.13% of the equity portfolio. The stock traded for an average price of $89.12 per share during the quarter.

The Phoenix-based for-profit education company, which operates a private university in Arizona and offers online degrees, has a $3.09 billion market cap; its shares were trading around $77.43 on Friday with a price-earnings ratio of 13.46, a price-book ratio of 2.37 and a price-sales ratio of 3.98.

The GF Value Line suggests the stock is modestly undervalued based on historical ratios, past performance and future earnings projections. 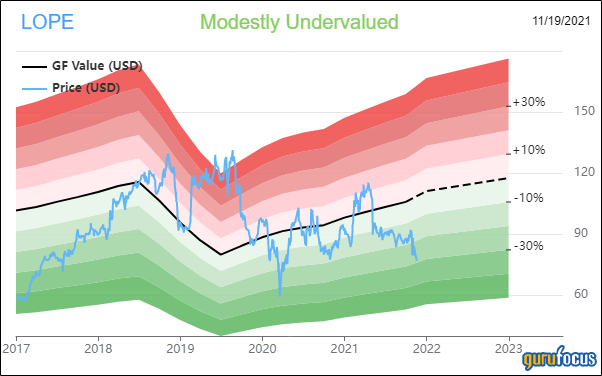 Grand Canyon Education’s financial strength and profitability were both rated 8 out of 10 by GuruFocus. In addition to a comfortable level of interest coverage, the company is supported by a robust Altman Z-Score of 9.27, which suggests it is in good standing. The return on invested capital also overshadows the weighted average cost of capital, indicating value is being created as the company grows.

The company is also supported by an expanding operating margin, strong returns on equity, assets and capital that outperform a majority of competitors and a high Piotroski F-Score of 7 out of 9, meaning business conditions are healthy. Although revenue per share has declined in recent years, Grand Canyon Education still has a predictability rank of one out of five stars. According to GuruFocus, companies with this rank return an average of 1.1% annually over a 10-year period.

Of the gurus invested in Grand Canyon,

The guru picked up 1,515 shares of Lockheed Martin (

LMT, Financial), dedicating 0.09% of the equity portfolio to the position. Shares traded for an average price of $362.11 each during the quarter.

The aerospace and defense company, which is headquartered in Bethesda, Maryland, has a market cap of $93.92 billion; its shares were trading around $340.80 on Friday with a price-earnings ratio of 15.72, a price-book ratio of 9.76 and a price-sales ratio of 1.44. 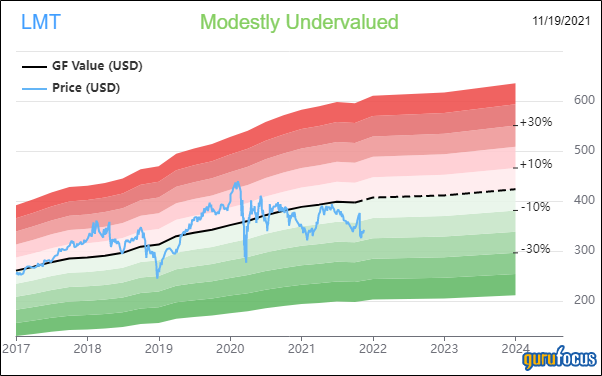 Lockheed Martin’s financial strength was rated 5 out of 10 by GuruFocus. In addition to a comfortable level of interest coverage, the company’s Altman Z-Score of 3.84 indicates it is in good standing. The ROIC also eclipses the WACC, implying good value creation is occurring.

The company’s profitability fared even better with an 8 out of 10 rating. In addition to operating margin expansion, its returns outperform a majority of industry peers. Lockheed Martin also has a high Piotroski F-Score of 8 and a one-star predictability rank, which is on watch as a result of revenue per share growth slowing down over the past 12 months.

The investor boosted the Amgen (

Auxier now holds 8,704 shares total, which represent 0.31% of the equity portfolio. GuruFocus estimates he has gained 5.42% on the investment so far. 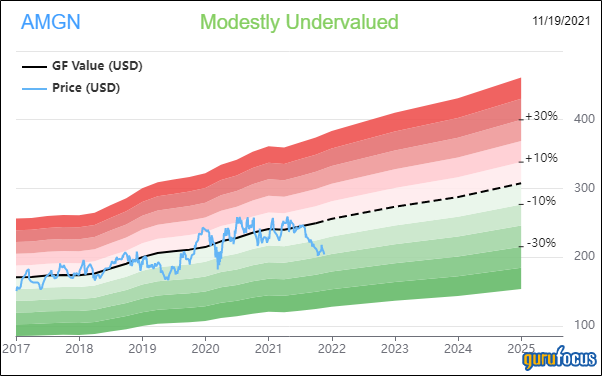 GuruFocus rated Amgen’s financial strength 4 out of 10. Although the company has adequate interest coverage, the Altman Z-Score of 1.68 warns it could be at risk of going bankrupt if it does not improve its liquidity. The ROIC, however, exceeds the WACC, so value is being created.

The company’s profitability fared better, scoring a 9 out of 10 rating. Although the operating margin is in decline, Amgen’s returns outperform a majority of competitors. It has a moderate Piotroski F-Score of 5, meaning business conditions are typical for a stable company. Consistent earnings and revenue growth has also contributed to a four-star predictability rank, which is on watch. GuruFocus says companies with this rank return an average of 9.8% annually.

With an impact of 0.08% on the equity portfolio, Auxier increased his holding of ViacomCBS (

The guru now holds 28,677 shares total, accounting for 0.19% of the equity. GuruFocus data shows he has lost an estimated 15.62% on the investment since establishing it in the fourth quarter of 2019.

The mass media and entertainment company, which is headquartered in New York, has a market cap of $22 billion; its shares were trading around $33.76 on Friday with a price-earnings ratio of 6.61, a price-book ratio of 1.06 and a price-sales ratio of 0.78. 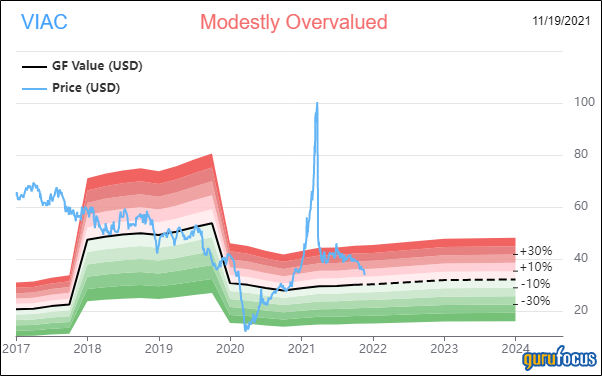 ViacomCBS’s financial strength was rated 4 out of 10 by GuruFocus. In addition to low interest coverage, the Altman Z-Score of 1.6 warns the company could be at risk of bankruptcy if it does not improve its liquidity. Its assets are also building up at a faster rate than revenue is growing, indicating it may be becoming less efficient. The ROIC surpasses the WACC, however, meaning good value creation is occurring.

The company’s profitability scored an 8 out of 10 rating despite having a declining operating margin. ViacomCBS is supported by strong returns that outperform a majority of industry peers as well as a moderate Piotroski F-Score of 5. On the back of steady earnings and revenue growth, the company has a 3.5-star predictability rank. GuruFocus data shows companies with this rank return an average of 9.3% annually.

Of the gurus invested in ViacomCBS, Rogers has the largest stake with 0.45% of its outstanding shares. Robbins, Pioneer Investments,

Curbing the position in Mastercard (

Auxier now holds 46,830 shares total, giving it 2.75% space in the equity portfolio. It is now his sixth-largest position. He has gained an estimated 945.42% on the long-held investment according to GuruFocus.

The Purchase, New York-based financial services company, which provides global payment technology solutions and services, has a $339.12 billion market cap; its shares were trading around $345.14 on Friday with a price-earnings ratio of 42.45, a price-book ratio of 50.66 and a price-sales ratio of 19.32. 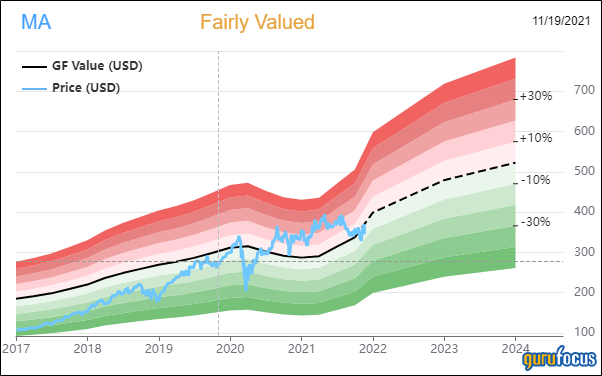 In his letter for the quarter, Auxier noted the stock was negatively impacted by global travel restrictions due to the pandemic as well as concerns that growing usage of “Buy Now Pay Later” will eat into its business.

“Our research is finding that BNPL concerns are overblown, as they still need to utilize Mastercard’s network,” Auxier wrote. “The Federal Reserve also came out with a proposed rule requiring at least two unaffiliated network options. Some analysts see this cutting into revenue for Visa and Mastercard; however, the security and network effects that they provide are much better than smaller competitors who have not invested as heavily in security.”

GuruFocus rated Mastercard’s financial strength 5 out of 10, driven by a comfortable level of interest coverage. Even though the Altman Z-Score of 10.47 is healthy, assets are building up at a faster rate than revenue is growing, indicating it may be becoming less efficient. The ROIC also tops the WACC, suggesting good value creation is occurring.

The company’s profitability fared even better, scoring a 9 out of 10 rating on the back of an expanding operating margin, returns that outperform a majority of competitors and a moderate Piotroski F-Score of 5. Mastercard also has a five-star predictability rank, bolstered by consistent earnings and revenue growth. GuruFocus says companies with this rank return an average of 12.1% annually.

During the quarter, Auxier also established a new position in GAMCO Investors Inc. (

Nearly half of the guru’s $603 million equity portfolio, which is composed of 164 stocks, is invested in the health care and financial services sectors, followed by a 17.2% holding in the consumer defensive space.