The Stock Market Is Undergoing a Regime Change

With the summer rally from the June lows, I previously thought the bear market was over. I had based my optimism on my observations of past bear markets; historically, once they recover over 50% from lows, they usually don't go back below said lows. It turns out that I was wrong. Even though the summer rally erased more than 50% of the bear market, the S&P 500 has now gone back and is re-testing the June lows and might break down further.

This is because the U.S. Federal Reserve has been much more aggressive in its policy tightening as inflation has spiralled out of control. The following chart of the S&P 500 is from the start of the Covid bear market (Feb. 18, 2020) to the writing of this article (Sept. 24, 2022).

Stocks depend on bonds

There has been a regime change in the market brought about by the Federal Reserve. As can be seen in the chart below, for the last 40 years, 10-year Treasury yields (the black line) have been falling as one of the many side effects of interest rates being steadily lowered over this period. That means the prices of bonds have risen for four decades. The Fed and other central banks could lower interest rates because inflation has been low.

As bond yields fall, the price of bonds goes up, and vice versa. Now this has reversed. This is a very big deal since in the U.S. alone, bond markets make up almost $40 trillion in value, compared to less than $20 trillion for the domestic stock market. The bond market is the dog which wags the stock market tail; American stock prices have been built on the assumption of an ever-growing bond market.

However, since the pandemic, inflation has shot up. Now, alarmed by high inflation which is now at 40-year highs (represented by the blue line in the chart below), the U.S. Federal Reserve has embarked on a rapid tightening process. It is not only increasing its overnight lending rate (called the effective Federal Fund rate), but it is now selling its hoard of longer term bonds it had accumulated in the last decade in order to drive up longer term interest rates like the 10-year Treasury bond interest rates (black line). The latter intervention on the long end of the bond curve is called "Quantitative Tightening," or QT, and is the reverse of Quantitative Easing, which was the norm for the past decade. Now it's clear to me that the four decades long bond bull market is over. The black line has clearly broken out of the four decade downward trend. 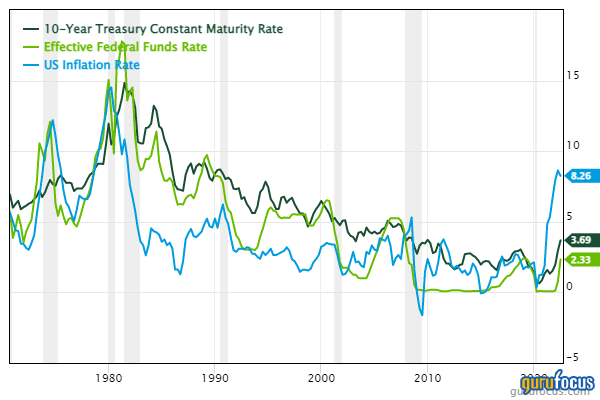 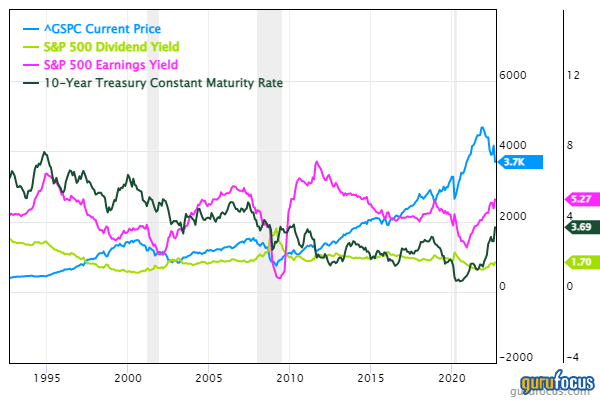 The following chart is the same as the one above except its on a log scale on the Y-axis. The log scale enables the viewer to appreciate percentage changes more clearly as it shows the data in relative terms while comparing different scales. 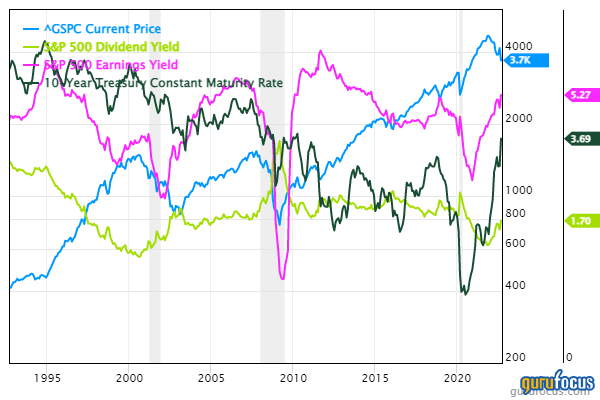 From the above chart, we can see that the 10-year Treasury bond rate is at about the same level as 2011 to 2012, but at that time the S&P 500 level was around 1,100 (vs. ~3,700 now). So the market has gone up more than three times. However, earnings yield and dividend yield for the S&P 500 are roughly at the same level as before - this means that earnings and dividends have also gone up more than three times.

The S&P 500 companies are far more profitable than a decade ago. The risk of course in that as the recession starts, earnings will go down and so will stock prices as stock prices follow earnings. Bond interest affects the cost of capital, and if companies have to pay more for debt, there is less for equity holders. Also, bonds are now much more competitive with stock earnings yields (see chart below).

Another important change to note is that the U.S. dollar (as represented by the U.S. dollar index in the chart below) has hit a two decade high. The U.S. dollar index compares USD against a basket of other currencies. The increase in interest rates in the U.S. has attracted a lot of foreign money into the U.S. This would mean the U.S. stocks are even more expensive than what their nominal values might indicate.

Given that the S&P 500 companies get 29% of their sales from outside the U.S., according to Goldman Sachs (

GS, Financial), they are vulnerable to earnings disappointment in light of the strengthening dollar. They typically sell their products or services in local currencies, then report financial results including those sales in U.S. dollars. This means that there is now a significant headwind for multinational U.S. companies' earnings in the quarters ahead as the value of those foreign earnings has depreciated in USD terms.

Based on the above data, I think stock markets are now being driven by the central banks. The Fed (and central banks around the world) are focused on fighting inflation. Inflation is enemy number one. Markets are currently in drawdown mode as traders unwind leverage and margin. Margin has become very expensive. I think the tightening cycle will likely continue for another six months to a year before the Fed will pause to assess the situation. However, high interest rates are likely to stay for years. Higher interest rates pull stock valuation downwards.

Profitless companies and companies with high price-earnings ratios will continue to get hammered. The discount rates used to calculate present values are shooting upwards because risk free interest rates are going up. The next tech bubble is not coming any time soon. Investors have come to their senses and have lost patience with companies that do not have profits and have too much insider stock compensation.

In this environment, I think it's better to focus on high quality companies with low debt which have been hammered unfairly due to the general market selloff. I also see bonds as doing well in the coming years.

The Fed is trying to land the economy in a difficult environment. The chances of a hard landing (i.e. a recession) are significant. U.S. assets are expensive compared to non-U.S. assets given the inexorable rise of the U.S. dollar. This is unsustainable and could start to reverse in the next year or so. High quality non-US stocks are looking attractive. There is saying on Wall Street - Don't fight the Fed. That is true, both when interest rates are going up or down. Invest with that in mind.