Does Eli Lilly Have the Next Big Alzheimer's Drug?

LLY, Financial). Shares of the Indianapolis-based drug giant have soared upwards of 10% this week to nearly $225. In the past year, the company has boosted its market value by about 55% to more than $215 billion.

The enthusiasm about Eli Lilly seems to have been driven in part by the prospects for its own Alzheimer’s medication called donanemab, which is still in clinical trials. But members of the medical community that have reviewed the drug’s performance in tests seem to be split about its effectiveness, pretty much like they were about Biogen’s aducanumab, since renamed Aduhelm.

The FDA greenlighted Aduhelm conditionally, based on the drug's ability to reduce amyloid, a protein that piles up into toxic plaques in the brains of Alzheimer’s patients. The approval set a precedent in that it indicated the regulatory agency would accept a lowering of amyloid as predictive of effectiveness, thus opening the window for other drugs that focus on this measure, reported Biopharma Dive.

Among those candidates is donanemab. Eli Lilly recently released encouraging phase 2 trial results for the drug. In testing, it cut brain plaque levels and slowed the decline in patients by 32% versus placebo.

"In some way, the donanemab trial may have given us the cleanest view for what the prospects of amyloid therapy might be. It actually did move the needle a tiny bit in the context of dramatically clearing amyloid," David Knopman, a neurologist and Alzheimer's specialist at the Mayo Clinic, told Biopharma Dive in an April interview. "But the effect size in the donanemab trial was very small. Is that the best we can do?" 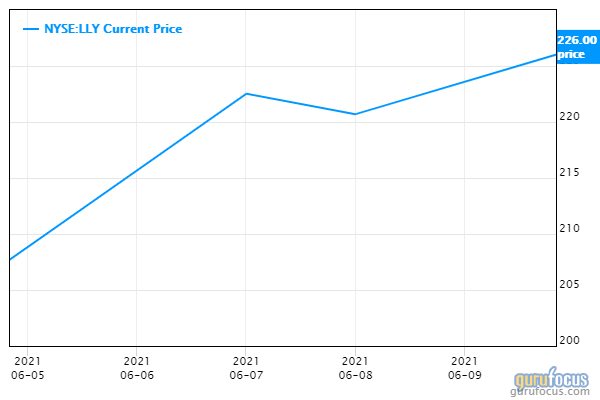 Eli Lilly shares are up big this week, thanks in big part to the potential for its experimental Alzheimer’s drug.

The New England Journal of Medicine published an editorial by researchers who felt that the improvement was statistically significant, but didn’t meet the pre-stated objective of cutting study subjects’ cognitive decline by half. Other concerns were:

Lilly had a different view, calling the results of its study “remarkable,” according to the Alzheimer’s information website Being Patient.

“Every way that we look at the data, we cut the data in many different ways to try and look to see if there’s some anomaly that can explain the results other than a successful drug, and we just don’t see it,” Eli Lilly Chief Scientific Officer Dan Skovronsky told Barron’s. “That’s different than every other Alzheimer’s study to date.”

Biogen is also working on a second amyloid-binding drug with the Japanese firm Easai Co. Ltd. (

TSE:4523, Financial) that's far along in testing. Lecanemab is in a phase 3 trial, with results expected by the second half of 2022. Other failed products are likely to get a second look, according to Caleb Alexander, a professor of epidemiology and medicine at the Johns Hopkins Bloomberg School of Public Health. Included in that group are gantenerumab and crenezumab from Roche (RHHBY, Financial).
Not a Premium Member of GuruFocus? Sign up for a free 7-day trial here.

I am/we are Long LLY
Rating: 0 / 5 (0 votes)
1 Comments
Write for GuruFocus
Submit an article
How to use GuruFocus - Tutorials What Is in the GuruFocus Premium Membership? A DIY Guide on How to Invest Using Guru Strategies GuruFocus New Features