Chewy: Tail-Wagging Growth Continues, but the Price Tag Is High 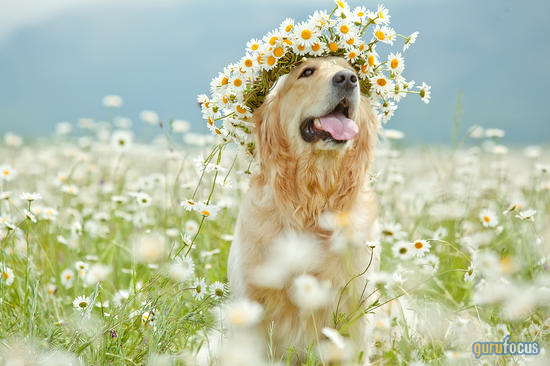 After the market closed on June 10, Chewy Inc. (

CHWY, Financial) released the earnings results for its first quarter of fiscal 2021, which ended on May 2.

Despite stellar growth in the top and bottom lines, the pet-focused e-commerce company slightly missed some analyst predictions on the revenue front, causing the shares to plummet more than 5% to around $75.11 apiece the following day. 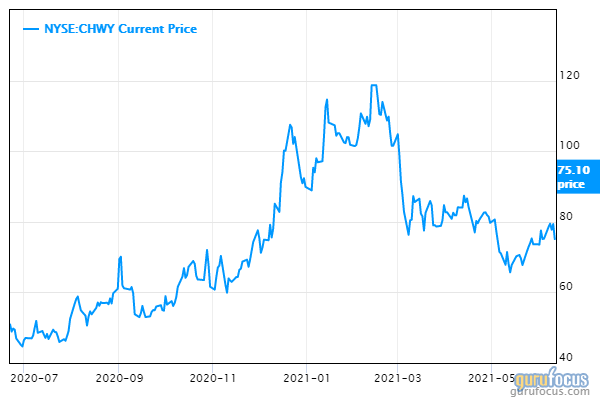 For the quarter, Chewy reported revenue of $2.14 billion, representing year-over-year growth of 31.7%. Net earnings per share came in at 9 cents, a positive turn compared to a loss per share of 12 cents in the year-ago quarter.

The company soundly beat bottom-line estimates, which ranged from an expected loss of 2 cents per share at Zacks to 4 cents per share at FactSet. Revenue was a slightly blurrier picture; Zacks had called for slightly lower revenue, while FactSet analysts had been expecting higher revenue.

The number of active customers increased 31.6% to 19,765 (active customers are defined as customers who have ordered, and for whom an order has shipped, at least once during the preceding 364-day period). The company also saw 34.4% growth in autoship sales, which are automatically purchased and shipped at regular intervals for customers who are subscribed to the autoship service.

Chewy’s CEO Sumit Singh had the following to say:

“2021 is already turning out to be an exciting and busy year for Chewy. We continue to execute against our growth roadmap, expand our customer base, increase share of wallet, and grow our addressable market-expanding verticals…

I am incredibly proud of the determination and focus of our teams and their ability to accelerate our pace of innovation on behalf of our customers, while consistently delivering strong top-line and bottom-line results for our shareholders.”

Chewy is continuing to invest in growth opportunities and improvements in its business. For example, it is continuing to expand its pet health and wellness options to include tele-health veterinary services, over-the-counter medicine, pharmacy and vet diet. It also announced its entry into the fresh and prepared pet food space. Chewy’s also raised its minimum wage in order to avoid the problem many other companies are facing with staff shortages due to not paying a living wage. All of these investments put the company in a position to continue its strong growth trajectory.

The company also has high hopes for the growth of its Pet Adoption Services, which enables customers to discover and adopt pets through Chewy’s website. Over 6,000 shelters and rescues have already signed up for the program. In addition to connecting people with pets, the program also has the potential to draw new customers to the Chewy website.

As is often the case with high-growth companies, Chewy seems to trade with a premium valuation. Shares have gained 114% since the company went public in June of 2019, and the forward price-earnings ratio based on earnings estimates for the full fiscal year is 1,281.03.

It is difficult to place a “fair” value on a company that is still in its early stages and growing quickly, but the fact that the stock dropped 5% after more than 30% growth and better-than-expected earnings numbers seems clear indication that shares are overheated.

Thus, investing in Chewy at the current price remains risky. Even if the company continues to grow, missing analysts’ predictions could result in lackluster returns due to the stock’s high valuation.