Spinoffs Roundup: These Companies Could Unlock Value in 2021

Some spinoffs can unlock the true value of businesses by allowing them to focus on their niches better than being part of a bulkier multi-faceted corporation allows. On the other hand, some spinoffs are made by the parent companies to shed dead weight, help get rid of legal liabilities or satisfy regulatory requirements in order to be cleared for a merger or acquisition. A spinoff is certainly no guarantee of success or failure in and of itself, as a lot depends on why the spinoff was made and whether its collection of assets and operations works well together.

So far in 2021, there have been five major spinoffs from publicly traded companies in the U.S., according to the GuruFocus Spinoff List: Cognyte Software Ltd. (

CGNT, Financial), Sendas Distribuidora SA (ASAI, Financial), Vimeo Inc. (VMEO, Financial), Organon & Co. (OGN, Financial) and Brookfield Asset Management Reinsurance Partners (BAMR, Financial). Let’s take a look at why these companies were spun off from their parent companies, what their business operations consist of and how likely they are to unlock value for shareholders.

Israel-based Cognyte is a global security analytics software company that provides governments and enterprises with actionable intelligence, helping security organizations analyze and visualize disparate data sets at scale. It has over 1,000 government and enterprise clients in more than 100 countries. 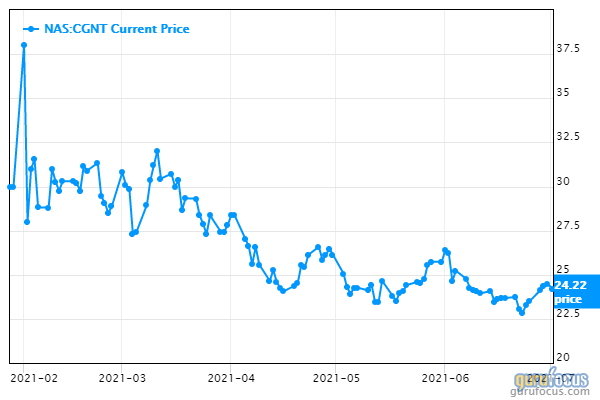 The company first announced its intention to split into two separate corporations in December of 2019 following shareholder pressure to separate its defense-related activities. Even before the split, the company was neatly divided between its defense operations and its civilian operations, and in the past, companies with a similar combination of assets have been able to unlock value by spinning off defense and focusing on civilian operations.

“Verint becoming a pure-play customer engagement company is happening at the exact right time – a time when digital transformation is driving significant change in how brands engage with their customers,” Verint’s CEO Dan Bodner said in a statement.

Although Cognyte was the company being spun off, it seems the move was being made mainly to unlock value at Verint. Getting rid of its government-related operations neatly axes the company’s previously high exposure to issues of national security, which could cause volatility unrelated to its core customer engagement business.

Sendas Distribuidora, operating as Assaí, is also in the food distribution business as a grocery store company. It is the largest pure-cash and carry player in Brazil. So-called “cash and carry” retailers are wholesale companies that used to sell to small businesses, but have now started opening their doors to consumers as well. 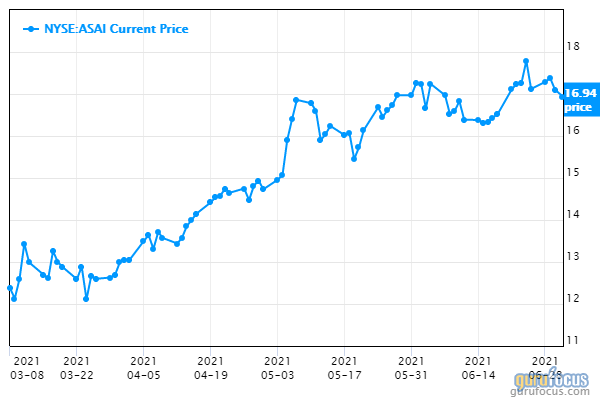 Cash and carry is one of the fastest-growing retail channels in Latin America, enjoying an especially strong success record in Brazil. Around 60% of Brazilian households now make monthly purchases from cash and carry stores, attracted by the ability to buy things cheaper in wholesale.

Thus, it comes as no surprise that Companhia Brasileira De Distribuicao made the decision to spin off its cash and carry subsidiary into its own company. The newly independent company will be able to better take advantage of the megatrend of cash and carry stores as well as the higher valuations investors might be willing to assign such stocks due to their growth expectations.

“The goal of the transaction is to unleash the full potential of the Company’s cash & carry and traditional retail businesses, allowing them to operate on a standalone basis, with separate management teams, and focusing on their respective businesses models and market opportunities,” the company said in a statement regarding the spinoff.

VMEO, Financial) was spun off from IAC/InterActiveCorp (IAC, Financial) on May 25. Commonly known by its acronym, IAC is a media and internet holding company based in New York. Its strategy is to invest in companies that it believes have high potential for success, and once those companies have become strong enough to thrive independently, it spins them off to unlock value.

Vimeo is a cloud-based video hosting, sharing and services platform provider focusing on delivering high-definition video to a range of devices. It operates on a software-as-a-service business model, allowing users to upload and promote their videos in an “artsy” way geared toward those who want a higher degree of customization. 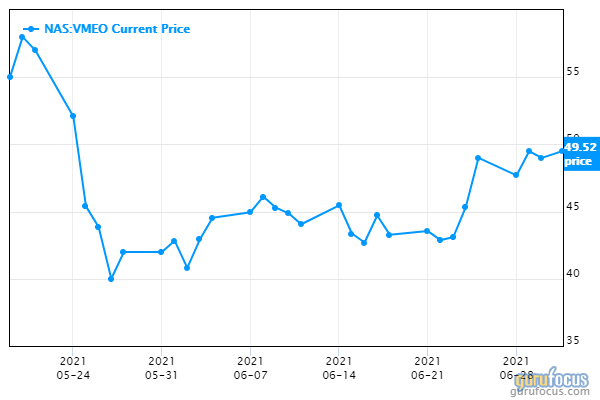 The stock took a tumble from where it was trading in limited “when-issued” trading during the first week, and it has been on a slow and steady rise since then. “It appears there is validation in repetition,” IAC Chairman Barry Diller said in a statement, referring to the company’s strategy of spinning off its successful businesses. Vimeo marks IAC’s 11th spinoff.

Given IAC’s long-established strategy of spinning off business that are shaping up to be highly successful and have strong future growth prospects, it seems safe to assume that this is the case with Vimeo as well.

The company should benefit from focusing on its own operations without being part of a larger corporate umbrella, and the markets are also more likely to assign a higher valuation to a pure-play cloud-based streaming stock.

Like IAC, Vimeo plans to provide monthly performance updates, which will provide investors with rare insight into the monthly data of a SaaS company. “You can stop managing to the quarter, Vimeo CEO Anjali Sud said regarding the benefits of monthly updates. “It’s freeing for us internally. There will be ups and downs, but transparency is good.”

OGN, Financial) was spun off from its parent company, Merck & Co. Inc. (MRK, Financial). Merck & Co. is a well-known international pharmaceutical giant headquartered in New Jersey, and the company says it split off Organon so that both companies could focus on their core therapeutic areas.

Organon’s focus is on the fields of reproductive medicine, contraception, psychiatry, hormone replacement therapy and anesthesia. The narrower focus should allow the company to focus on its areas of expertise and implement a more effective branding and marketing strategy. 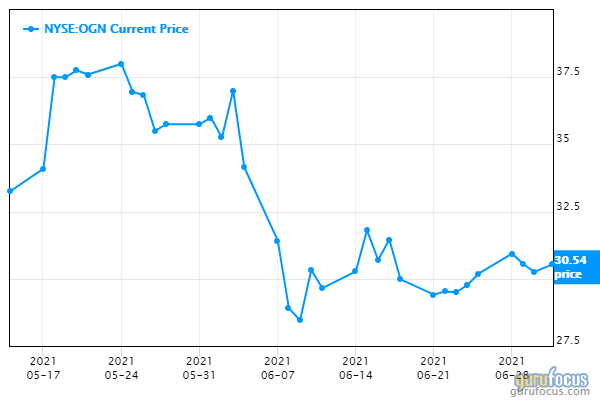 “Today marks a significant milestone for both Merck and Organon. Organon is now an independent, publicly traded company with a broad portfolio of important medicines and products, and is fully prepared to deliver sustainable growth and value,” Merck President and CEO Rob Davis said. “With leadership in our growth pillars and our robust pipeline, Merck is well positioned for strong long-term growth, with scientific innovation remaining the source of our value creation.”

It should be noted that as part of the spinoff, Merck received a special cash dividend of $9 billion from Organon. Given that Organon’s market cap is less than $9 billion, this is a significant amount, which could suggest that Merck made the spinoff purely for the cash and the stock price boost.

However, with sales in over 140 countries and $6.5 billion in annual revenues, Organon is a prominent company in the women’s health industry. With its launch, the company plans to pursue new growth opportunities and collaborations, including its planned acquisition of medical device company Alydia Health for $240 million.

Brookfield Reinsurance provides capital-based solutions to insurance companies and their stakeholders. Operating through its subsidiaries North End Re and Brookfield Annuity, the company provides annuity-based reinsurance products and acts as a direct issuer of pension risk transfer products.

On July 1, shares of Brookfield Reinsurance traded around $52.70 for a market cap of $1.48 billion. Since separating from its parent company and hitting public markets at $57, the stock is down 7%. 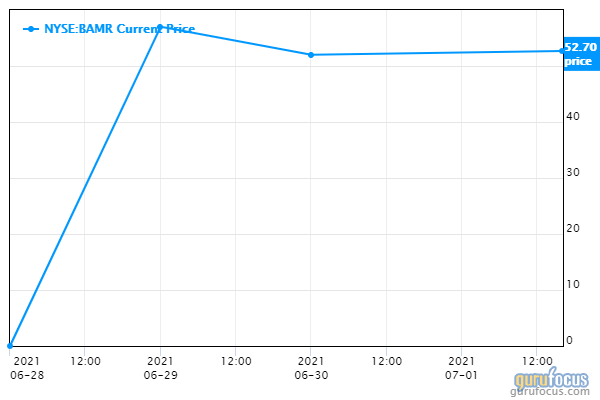 Management hopes the special share distribution will encourage investing in the stock, since it increases the total share count and offers a way for investors to focus on just the reinsurance division rather than the parent company’s many different operations.

I/we have no positions in any stocks mentioned, and no plans to initiate any positions within the next 72 hours.
Rating: 5 / 5 (3 votes)
Write for GuruFocus
Submit an article
How to use GuruFocus - Tutorials What Is in the GuruFocus Premium Membership? A DIY Guide on How to Invest Using Guru Strategies GuruFocus New Features