The IT distributor recently became an Undervalued Predictable stock

SNX, Financial) recently joined the ranks of Undervalued Predictable stocks at GuruFocus because of its earnings-based discounted cash flow valuation and its predictability rating of five-out-of-five stars

That’s a feather in the corporate hat, since it signals to investors that shares are selling for less than their intrinsic value and that they can depend on the firm to consistently deliver growing earnings. Currently, only 160 of the thousands of stocks followed by GuruFocus make this prestigious list.

Synnex is an IT distribution company based in Fremont, California. It was founded in 1980. According to its website, it is, “an industry leader in IT distribution, providing comprehensive logistics, integration services, and technology solutions to help our customers and business partners grow and enhance their customer-engagement strategies.”

It is a $6 billion company and a member of the Fortune 200 list. Operationally, it distributes more than 40,000 technology products to more than 25,000 retail customers and resellers in the U.S., Canada and Japan.

It also has two divisions that operate in related areas:

On Dec. 1, 2020, the company completed its spin-off of Concentrix Corporation (

CNXC, Financial), which is now an independent, publicly traded entity. Since then, it has announced a $7.2 billion merger agreement with Tech Data Corporation (TECD, Financial). In the words of a Synnex press release, “This transaction allows for accelerated revenue and earnings growth, an expanded global footprint, and the ability to drive significant operating improvements while continuing to create shareholder value.”

As a retailer and wholesaler, Synnex faces what it calls intense competition based on product availability, credit terms, price, speed and accuracy of delivery, effectiveness of its sales and marketing programs and customer service.

It lists its major competitors as Arrow Electronics (

ARW, Financial), Ingram Micro (IM, Financial), ScanSource (SCSC, Financial) and until recently, Tech Data. The following chart shows how Synnex has convincingly outperformed the first three competitors and the S&P 500 over the past decade: 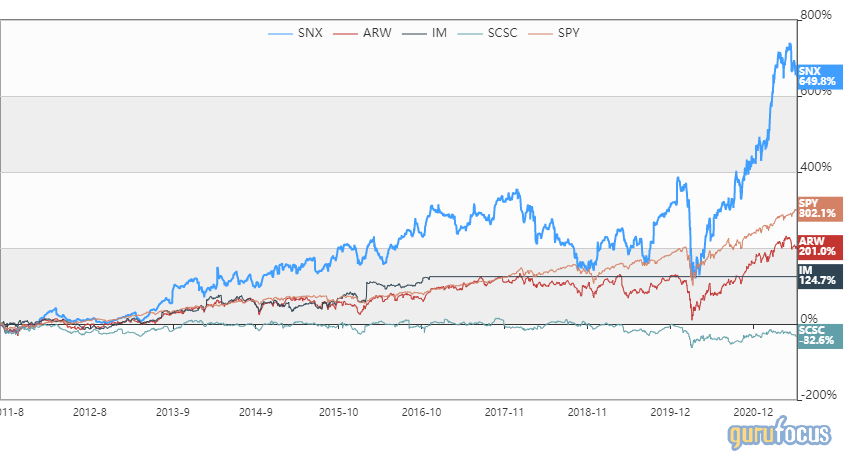 Note that the comparable quarter for 2020 was the period from April 1 to June 30, a quarter hard hit by the Covid-19 pandemic. 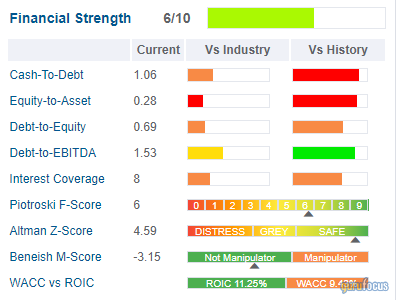 Although the upper half of this table is dominated by red, Synnex enjoys reasonably stable financial strength. Its interest coverage is relatively low but enough to generate eight times what is needed to pay interest expenses.

That’s backed up by an Altman Z-Score that indicates it is safe from bankruptcy. The Piotroski F-Score also indicates the company is well managed.

The following chart shows cash, short-term debt and long-term debt for the 10 years ending on Nov. 30, 2020 (the end of its latest fiscal year): 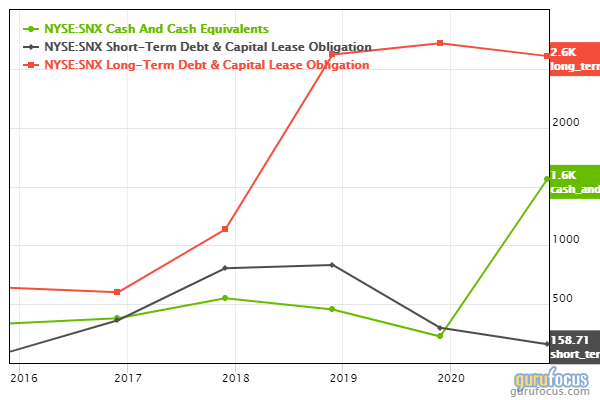 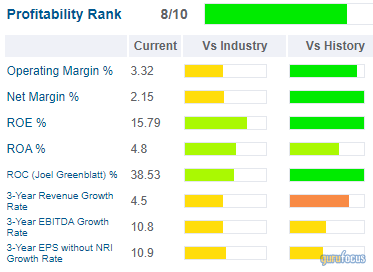 Synnex posts a strong score for profitability. Yellow bars under the industry column signify the company’s margins are near average for the software industry. As the following chart shows, margins are rising: 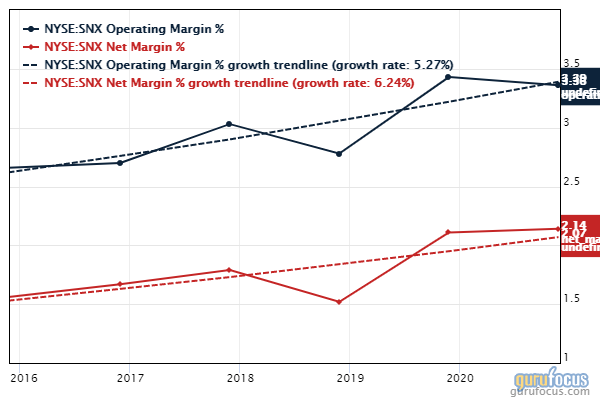 Again, judging by the bars, the company’s return on equity and return on assets are slightly above the industry mean.

All three lines in the growth section are positive and slightly higher than the industry average. Note that the Ebitda and EPS growth rates are faster than the growth rate for revenue. This means the company is becoming more efficient.

While the dividend had been rising, it dipped abruptly in 2020. As the company explained in its 10-K for that year:

“Due to macroeconomic uncertainty related to the COVID-19 pandemic, we suspended our dividend early in 2020 to focus on utilizing our capital to support our business, associates, and partners. Given improved financial performance and liquidity, we reinstated our dividend in January 2021.”

The dividend yield has also been driven down by a rising share price over the past 16 months: 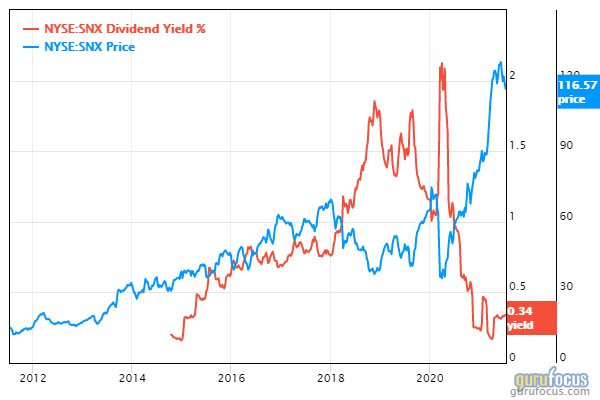 Shareholders should expect no gains through share repurchases; the company has been adding shares, not buying them back: 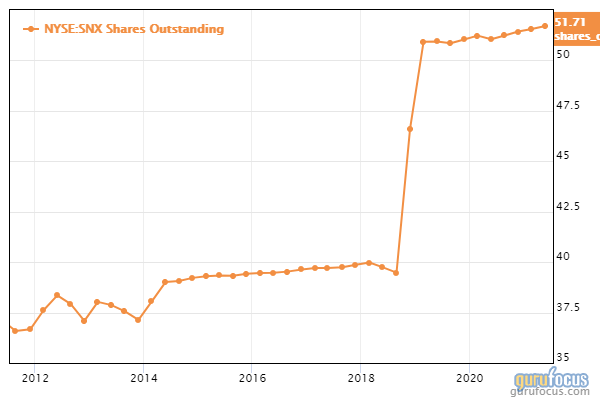 Here’s the chart of the stock price over the past two months: 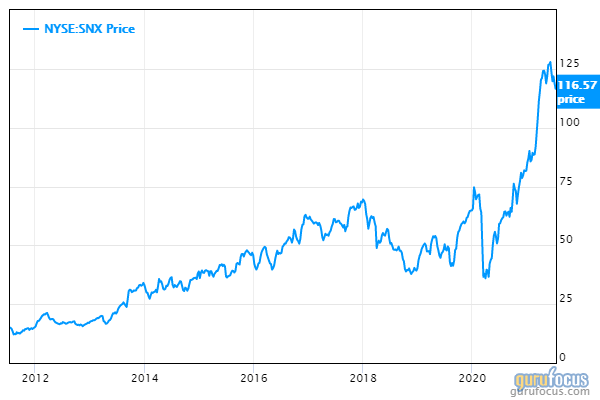 It may not look like it based on the recent share price jump, but Synnex is considered undervalued by some metrics. The Undervalued Predictable screener takes its valuation from the discounted cash flow (DCF) calculator. In particular, the stock is best suited for calculations based on the earnings power method. We can also have confidence in the DCF because of its five-out-of-five-star predictability rating. 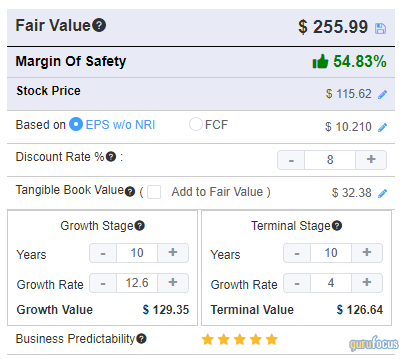 The undervalued assessment is also supported by the PEG ratio (price-earnings divided by the five-year Ebitda growth rate). The company has a PEG ratio of just 0.69, and the fair value mark is at 1.00.

The investing giants have been doing more selling than buying of the stock over the past two years:

Seven of the gurus followed by GuruFocus have positions in Synnex; the three largest holdings are those of:

Synnex deserves its place among the Undervalued Predictable stocks. Along with its substantial margin of safety, it has the highest predictability rank available. Other fundamental information and data back up that assertion. It has a solid balance sheet, above-average profitability and a reasonable dividend. Over the past decade, it has issued more stock than it has repurchased, but the issuances have helped the company expand.

I think this stock may be suitable for a value investor willing to live with short and long-term debt. It might also fit the bill for growth investors who think Synnex will reverse its short-term pullback and begin going up again. There are better bets available for income investors, but it might be worth considering if it can achieve its historical dividend yields again someday.