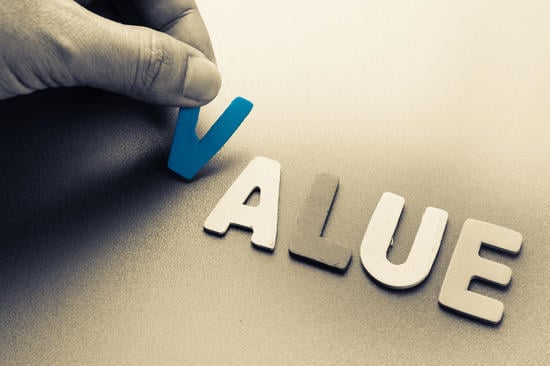 Meryl Witmer, a general partner at Eagle Capital Partners LP, and a board member of Berkshire Hathaway, recently appeared on Barron's mid-2021 Roundtable to discuss her views on the market, as well as, provide some stock ideas.

Witmer manages a concentrated portfolio using a value approach. During the program, she summed up her view on the current market:

"I’m a bottom-up stock-picker; I don’t have a broad view. We see some values and some overpriced stocks. Tech stocks seem pricey. I worry about policy issues. If corporate taxes go up, that could hurt valuations. There is a lot of government debt; if interest rates rise, that could become a bigger problem. The companies I like make money and trade at low multiples."

Ardagh group will have 80% ownership in the new company following the merger. AMP produces aluminium cans for beverages, which are displacing bottles since cans are much more easily recyclable and easier to transport. The company has 24 plants across the U.S., Europe and Brazil.

Witmer says the company plans to invest $1.8 billion through 2024 and will add an additional 21 billion cans of capacity. Nearly all this capacity is secured with long-term contracts of four to seven years from major beverage manufacturers. The contracts include pass-through pricing on aluminum, energy and other major inputs. Growth should continue for more than a decade. The beverage can industry is a oligopoly, with the top three can producers, Ball (BLL, Crown Holdings (

CCK, Financial) and AMP, controlling over 80% of capacity. Witmer expects the business to trade at 16 times free cash flow in 2023 (a 60% increase from the current SPAC price of $10).

"Our estimates incorporate all known dilution from warrants and incentive shares, 60 million of which will be issued to Ardagh Group in 12-million-share increments if the stock hits $13, $15, $16.50, $18, and $19.50 over the 5 and a half years after the deal closes," Witmer said.

In short, this is a compelling investment being brought to the table.

HLMN, Financial) is another company suggested by Witmer, which made its public debut on July 14 through a SPAC combination with Landcadia Holdings III. Founded in 1964 and based in Cincinnati, Ohio, the company is a designer and distributor of hardware such as specialty and construction fasteners, protective gear and robotic solutions like key cutters and fob duplicators. Its products are distributed through home-improvement stores like Home Depot (HD, Financial), Lowe’s (LOW, Financial) and Ace as well as Walmart (WMT, Financial), Tractor Supply (TSCO, Financial) and independent hardware stores.

The company provides complex logistics, inventory, category management and differentiated in-store merchandising services via a 1,100-person field sales and service team, 3,600 non-union employees across corporate headquarters, 22 distribution centers and a Taiwan sourcing office. Witmer is particularly keen on the Hillman's robotic kiosk technologies to duplicate keys and fobs placed in a range of retailers in the U.S., Canada and Mexico. She expects the company to pay down debt with the SPAC proceeds. She expects the company to trade at $14 to $15, up from around $12 now, in 2022 and subsequently grow with acqusitions.

DOOR, Financial) is a vertically integrated entry door manufacturer and a play on the housing and renovation market. Residential and commercial entry doors are not easy to make and Masonite, along with Jeld-Wen (JELD, Financial), owns much of the North American market.

The stock is overvalued according to the GF Value chart. 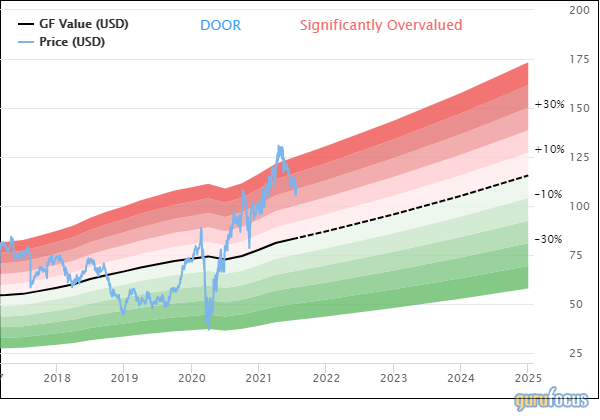 Regardless, the per-share growth metrics for the company are impressive.

Witmer says Masonite has 25 million shares outstanding and about $20 million in amortization. With earnings estimates this year of about $8.50 a share, plus amortization of 80 cents, it is reasonably priced at $112 a share (price-earnings ratio is around 13). She sees earnings growing to $15 a share in 2024 if the company meets its targets and spends about $100 million a year on buybacks. At the end of 2024, it could have more than $1 billion of cash on its balance sheet, in which case she would expect more buybacks or dividends. Her target over the next year is $150 (from around $112). A multiple of 12 times 2024 potential earnings (ex-amortization), plus $1 billion of cash gives us a target of $220 a share in three to four years.

Despite the high price, the company certainly has wind in its sails from housing, which should continue for a long time as the millennial generation continues to start their own families. If Witmer is right, the stock can nearly double from here in three to four years, which is a return of 18% to 25% a year.

Witmer's investment ideas are quite solid and a change from the tech-dominated conversation popular in many investing circles. None of them appear to be unreasonably valued and all of them are growing with large addressable markets. Two of the three ideas are SPACs (Gores and Hillman), while two are plays on housing and demographics (Hillman and Masonite). As such, investors may want to consider looking into these companies.