The guru’s Chicago-based firm invests in undervalued small and mid-cap companies that have sustainable competitive advantages, high barriers to entry and predictable fundamentals that allow for double-digit earnings growth. Like the tortoise featured in the firm’s logo, Rogers emphasizes that patience, independent thinking and a long-term outlook are necessary for generating good returns.

In its second-quarter letter, the Ariel Fund noted “record levels of fiscal support, pent-up consumer demand and rising Covid-19 vaccination rates continue to fuel the global economic recovery.” Along with the recovery, however, are rising concerns surrounding inflation, but the firm said it views “such jitters” as only “short-term noise.” It continued:

“While we acknowledge valuations are getting frothy, investor sentiment has not yet reached euphoric levels. Meanwhile, it is in times like these where an active investment manager proves its merit by ignoring market enthusiasm and searching instead for quality companies with dominant franchises, capable management teams and robust balance sheets whose inevitable weakness are reflected in its price per share. Given our ‘slow and steady’ approach, we remain confident in our current positioning, especially with our portfolios trading at a discount relative to the indices. We strongly believe the dedicated patient investor that stays the course and consistently owns differentiated businesses at reasonable prices will deliver superior returns over the long run.”

Keeping these developments in mind, the fund entered three positions during the three months ended June 30, sold out of 29 holdings and added to or trimmed a slew of other existing investments. The most notable trades included a new holding in ADT Inc. (

The fund invested in 15.3 million shares of ADT (

ADT, Financial), allocating 1.55% of the equity portfolio to the stake. The stock traded for an average price of $10 per share during the quarter.

The Boca Raton, Florida-based security company, which provides residential, small and large business electronic security, fire protection and other related alarm monitoring services, has a $6.74 billion market cap; its shares were trading around $8.11 on Friday with a price-book ratio of 2.36 and a price-sales ratio of 1.24. 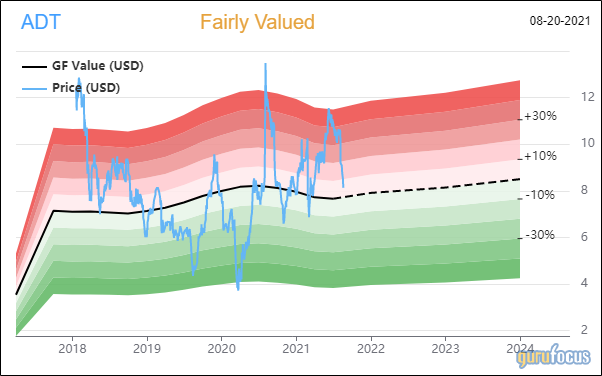 In its quarterly letter, Ariel highlighted that the company’s brand and nationwide presence in the security industry is “unmatched,” which has resulted in “leading market share, a high recurring revenue base and attractive free cash flow generation.”

“While investors remain concerned that do-it-yourself competition will erode the installation and technology-driven moat around the business, we believe ADT is well positioned to benefit from strategic partnerships, such as Google and secular growth of smart home adoption,” the firm wrote.

GuruFocus rated ADT’s financial strength 2 out of 10 on the back of weak interest coverage as well as a low Altman Z-Score of 0.27, which warns it could be at risk of bankruptcy if it does not improve its liquidity. The return on invested capital is also overshadowed by the weighted average cost of capital, indicating issues with creating value while the company is growing.

The company’s profitability scored a 5 out of 10 rating. Even though the operating margin is expanding, the returns on equity, assets and capital are underperforming a majority of its competitors. ADT is supported, however, by a moderate Piotroski F-Score of 5, implying business conditions are stable. Revenue per share has also declined for the past 12 months.

Of the gurus invested in ADT, Rogers’ firm now has the largest stake with 1.84% of outstanding shares.

TDY, Financial), impacting the equity portfolio by -0.53%. Shares traded for an average price of $58.43 each during the quarter.

GuruFocus estimates Ariel gained 45.94% on the investment, which was established in the third quarter of 2020.

Headquartered in Wilsonville, Oregon, the company, which designs and produces thermal imaging cameras and sensors, was acquired by Teledyne in May. According to the terms of the $8.2 billion agreement, shareholders of FLIR received $28 per share in cash and 0.0718 shares of Teledyne common stock for each share owned. This gave FLIR shares a total approximate value of $57.40 each.

Other gurus who owned the stock before the deal closed were

With an impact of 0.95% on the equity portfolio, Ariel upped its ViacomCBS (

The fund now holds 2.9 million shares total, giving it 1.26% space in the equity portfolio. GuruFocus data shows it has gained an estimated 86.8% on the long-held investment.

The mass media company based in New York, which focuses primarily on film and television production, has a market cap of $25.88 billion; its shares were trading around $39.74 on Friday with a price-earnings ratio of 7.5, a price-book ratio of 1.27 and a price-sales ratio of 0.96. 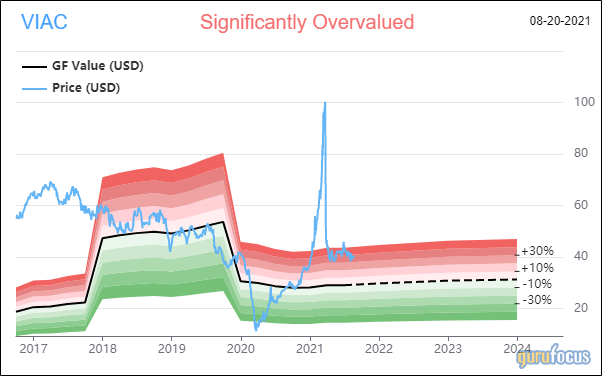 The valuation rank of 10 out of 10, however, is more indicative of undervaluation.

GuruFocus rated ViacomCBS’s financial strength 4 out of 10. In addition to low interest coverage, the Altman Z-Score of 1.66 warns the company could be at risk of bankruptcy if it does not improve its liquidity. Its assets are also building up at a faster rate than revenue is growing, indicating it may be becoming less efficient. The ROIC eclipses the WACC, however, indicating good value creation is occurring.

The company’s profitability scored an 8 out of 10 rating despite having a declining operating margin. ViacomCBS is supported by strong returns that outperform a majority of industry peers as well as a moderate Piotroski F-Score of 6. Although revenue per share had slowed down over the past year, the company still has a 3.5-star predictability rank. GuruFocus says companies with this rank return an average of 9.3% annually over a 10-year period.

With an impact of 0.49% on the equity portfolio, the firm increased its holding of Madison Square Garden Entertainment (

The fund now holds 3.2 million shares total, accounting for 2.53% of the equity portfolio. GuruFocus estimates it has lost 23.18% on the investment so far.

The New York-based company, which owns and operates iconic entertainment venues like Radio City Music Hall and the Beacon Theatre as well as other popular dining and nightlife destinations, has a $2.08 billion market cap; its shares were trading around $61.29 on Friday with a price-book ratio of 0.59 and a price-sales ratio of 16.8.

Over the past 12 months, the stock has fallen nearly 5%. 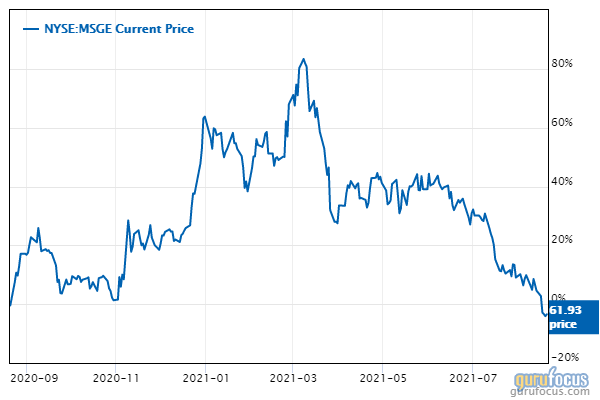 Madison Square Garden's financial strength was rated 4 out of 10 by GuruFocus on the back of a stable cash-to-debt ratio of 1.44. The Altman Z-Score of 0.98, however, warns the company could be at risk of bankruptcy.

Weighed down by negative margins and returns that underperform a majority of competitors, the company's profitability scored a 1 out of 10 rating.

With a 9.44% stake, Rogers’ firm has the largest position in Madison Square Garden among the gurus. Gabelli,

CRL, Financial),impacting the equity portfolio by -0.54%. Shares traded for an average price of $332.71 each during the quarter.

Ariel now holds 221,099 shares total, which represent 0.77% of the equity portfolio. It has gained an estimated 197.69% on the long-held investment so far according to GuruFocus.

The pharmaceutical company, which is headquartered in Wilmington, Massachusetts, has a market cap of $21.41 billion; its shares were trading around $424.83 on Friday with a price-earnings ratio of 54.75, a price-book ratio of 9.23and a price-sales ratio of 6.63.

The valuation rank of 1 out of 10 aligns with that assessment since the share price and price ratios are closing in on 10-year highs.

GuruFocus rated Charles River’s financial strength 4 out of 10. The adequate interest coverage and high Altman Z-Score of 3.89 indicate the company is in good standing even thought assets are building up at a faster rate than revenue is growing.

The company’s profitability fared even better with a 7 out of 10 rating, driven by margins and returns that outperform over half of its industry peers as well as a moderate Piotrsoki F-Score of 6. It also has a one-star predictability rank. According to GuruFocus, companies with this rank return an average of 1.1% annually. 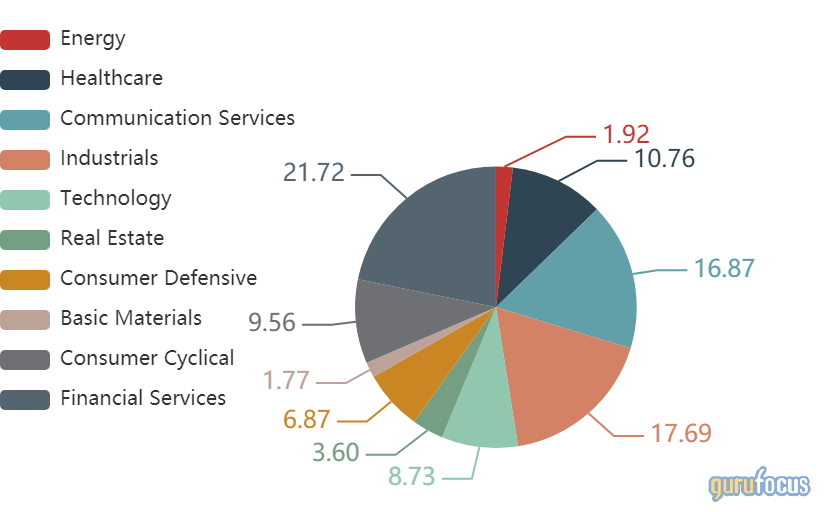