A Look at R&D Spending in Pharma

In GAAP accounting, fixed assets are usually capitalized on a company’s balance sheet and subsequently amortized over their expected useful life.

For intangible assets, the accounting treatment differs based on whether the asset was created internally or purchased from a third party. Generally speaking, intangible assets developed in-house are immediately expensed through the income statement, while the same assets acquired externally would be capitalized on the balance sheet and subsequently amortized. Besides the obvious inconsistency, this treatment assigns zero asset value on the balance sheets of companies investing large sums of capital into internal research and development efforts or software development. A direct consequence of this method of expensing R&D is that reported earnings become depressed. In other words, the company is currently under-earning despite typically investing ahead of future revenue-generating opportunities.

Conversely, companies that don’t invest significantly in intangibles may well be over-earning. These are typically asset-heavy and capital-intensive, but less likely to generate significant long-term shareholder value based on their life cycle stage and the heightened risk to their business model of commoditization. They are also typically cyclical, like automakers, steel plants or mining companies.

Research-based pharmaceutical companies are particularly prone to this under-earning tendency. They typically invest a large portion of their revenue in R&D, which is then expensed immediately. This has the effect of depressing profits, but does not take into account the future payoff of that investment. As investors, we must think of pharmaceutical R&D as a capital expenditure rather than an expense.

The following table shows a list of the largest research-based drug manufacturers who spend at least 15% of their revenue on R&D and are profitable (i.e., have a price-earnings ratio of greater than 1). In addition to the price-earnings ratio and market cap, I have also listed the percent of revenue a company is spending on R&D (R&D divided by revenue). For example, Merck & Co. Inc. (

MRK, Financial) spent a massive 32.98% of its revenue on R&D, which will help produce new revenue in the future. So arguably, Merck is under-earning at the present time because of its huge investment for the future.

The following chart expresses the same table as a graph with the price-earnings ratio along the Y-axis and R&D/Revenue ratio along the X-axis. The bubble size shows the relative market capitalization of the companies involved. 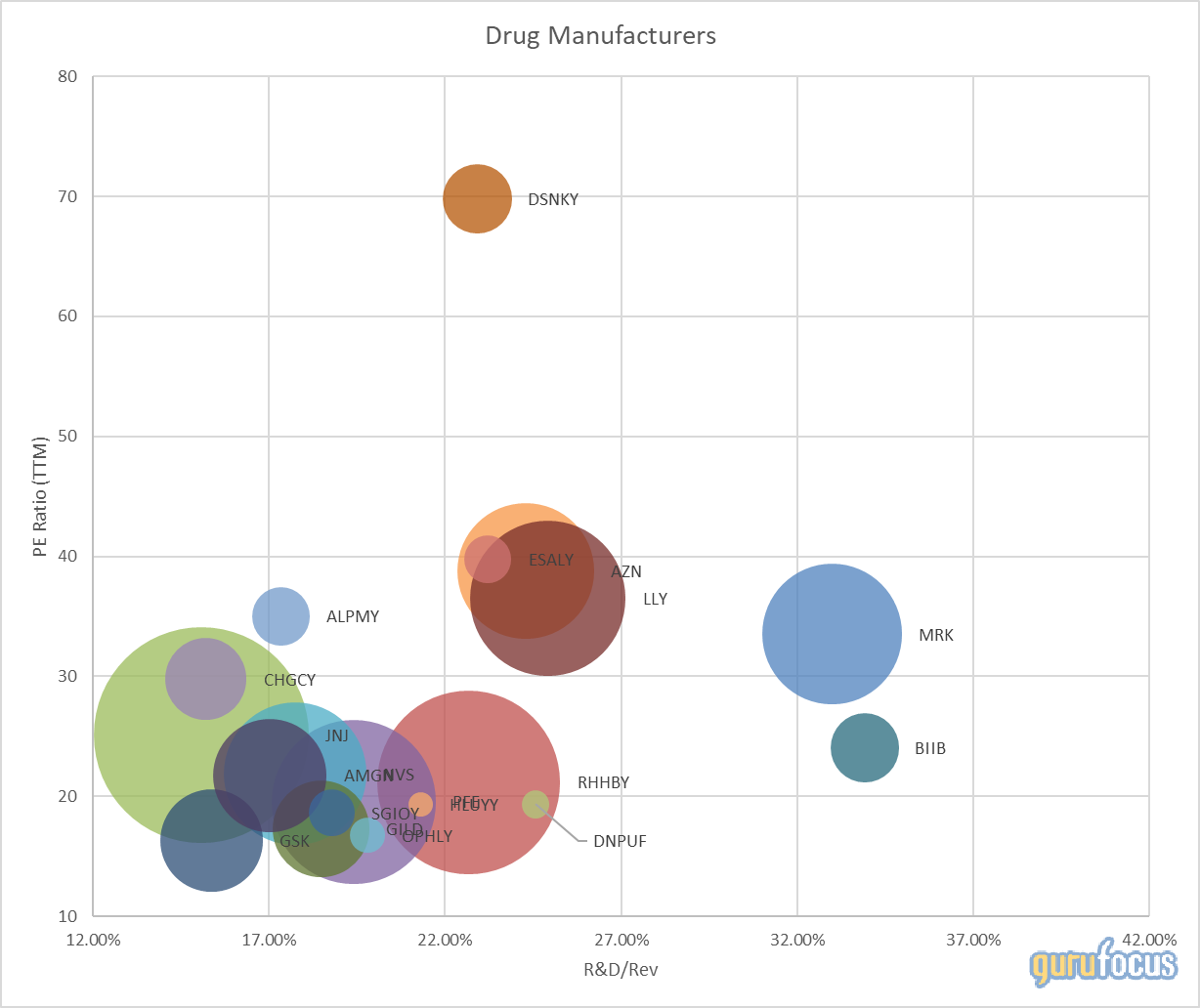 In examining the chart, Merck and Biogen stand out as companies spending a huge amount on R&D and yet have reasonable price-earnings multiples. I think we can hypothesize that these companies may be currently under-earning and should benefit from all that R&D spending in the future. GlaxoSmithKline is another company with solid R&D spend but a low price-earnings ratio. Thus, they are candidates for a deeper dive for a potential long-term investment.

Looking at the R&D/Revenue ratio can give an investor an additional dimension of insight over and above commonly used financial ratios. I plan to further examine this metric for other knowledge-based industries, such as software and biotechnology, who spend a lot of money on internal development. I suspect a similar pattern of low book value and under-earning may hold there.