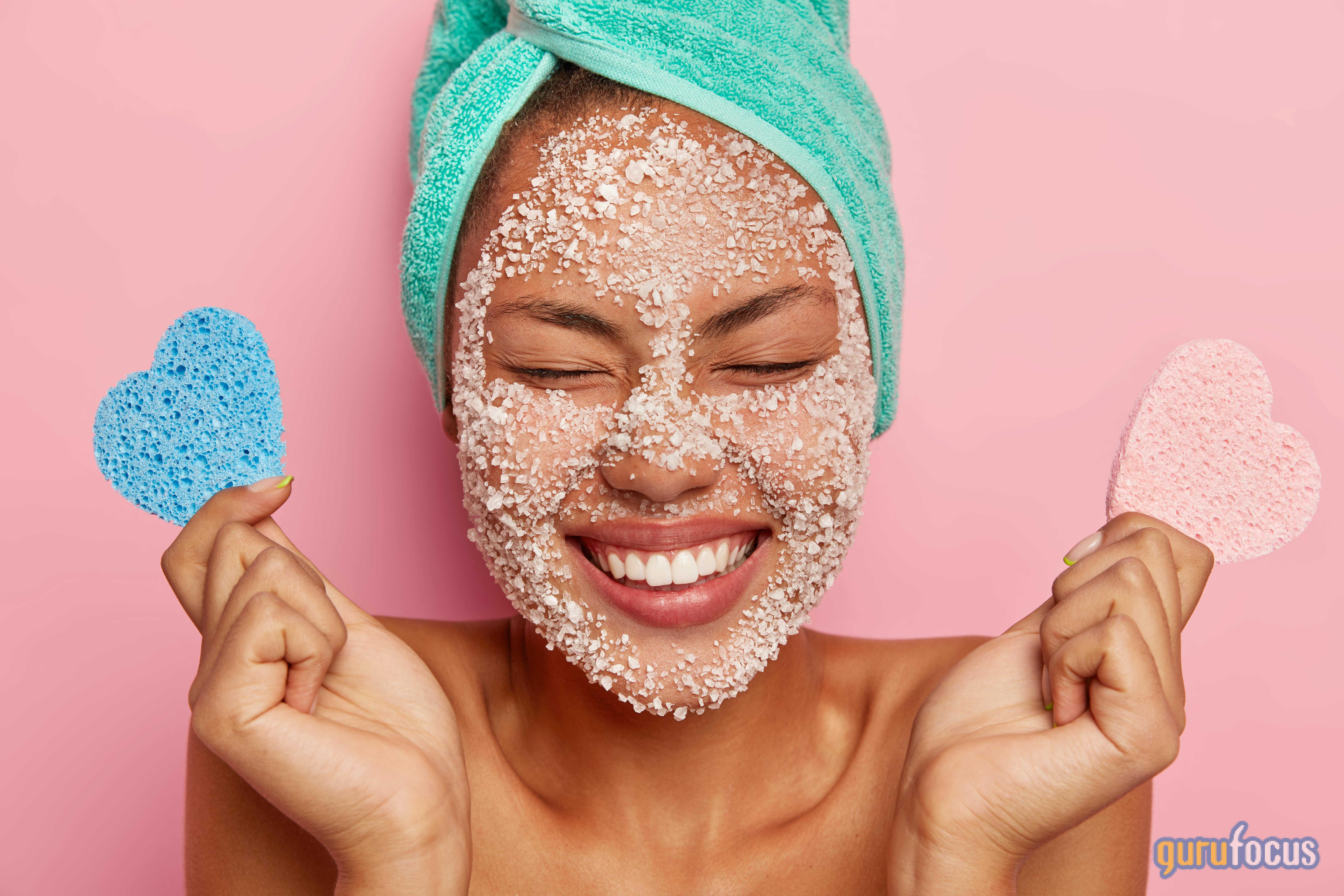 According to GuruFocus Real-Time Picks, a Premium feature,

All four of the trades are dated Aug. 31, and what is interesting to note is that three of the buys are companies in the travel and leisure industry; the only exception is Kennametal, a supplier of cutting tools and industrial materials.

Rogers is the chairman, co-CEO and chief investment officer of the firm. The guru holds that a patient, long-term, independent and forward-looking approach is essential for generating good returns.

MANU, Financial) on Aug. 31, giving the holding a 0.96% weight in the equity portfolio. On the day of the trade, shares traded for an average price of $17.24. Rogers’ firm now owns 3.66% of the company’s shares outstanding.

GuruFocus gives the company a financial strength rating of 3 out of 10 and a profitability rating of 5 out of 10. While the Altman Z-Score of 1.56 indicates potential liquidity issues, the Piotroski F-Score of 4 out of 9 is typical of a financially stable company. The three-year revenue per share growth rate was -5% as of the end of the 2020 fiscal year, while the three-year Ebitda per share growth rate was -13.2%. 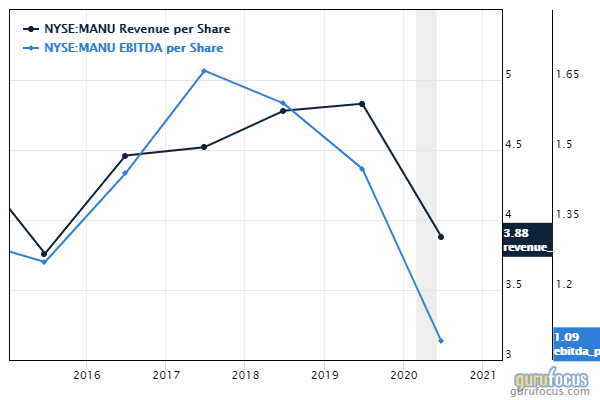 Profits from the team’s ticket sales, merchandise and other sources of income are expected to recover as people become less cautious about the pandemic and more comfortable going out to crowded sporting events again. Moreover, publicly traded sports teams are often considered undervalued compared to the price tag they could fetch from sale to a private buyer; combined with an expectation for increased profits, this could be a recipe for solid capital gains.

GuruFocus gives the company a financial strength rating of 3 out of 10 and a profitability rating of 3 out of 10. The Altman Z-Score of 0.3 and Piotroski F-Score of 2 out of 9 indicate poor business operations. The operating margin of -185.32% and net margin of 3.33% aren’t good by any means, but they have recovered significantly from the bottom of their pandemic lows in mid-2020, so it seems the company is making headway toward becoming profitable again. 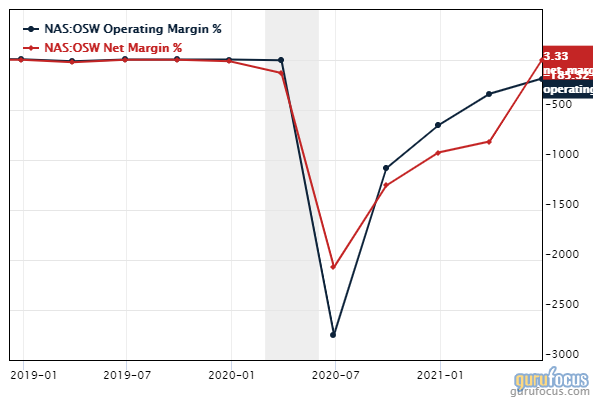 Based in the Bahamas, OneSpaWorld is a company that operates health and wellness centers onboard cruise ships and at destination resorts around the world. It offers tourists a variety of health, wellness, fitness and beauty products and services during their trips.

OneSpaWorld was hit hard by the pandemic as the flow of cruise line passengers and other tourists that it relies on for most of its income came to a halt. The company has so far managed to secure enough funding from private investors and secondary common stock offerings to avoid bankruptcy. However, as more cruises begin to resume, the company expects to once again benefit from a yearly captive customer base of more than 20 million. It also has plans to expand into the Asian market, which could further drive growth numbers.

The firm upped its stake in Madison Square Garden Entertainment (

GuruFocus gives the company a financial strength rating of 4 out of 10 and a profitability rating of 1 out of 10. While the Altman Z-Score of 0.75 signals the company could be at risk of bankruptcy, the cash-debt ratio of 1.23 and current ratio of 2.16 show it has the cash to continue operating for the time being. The operating margin of -102.66% and net margin of -118.02% show the company is still far away from profitability. However, with a Beneish M-Score of 4.05, it appears the company is likely manipulating its financial results, so investors shouldn’t take its numbers at face value. 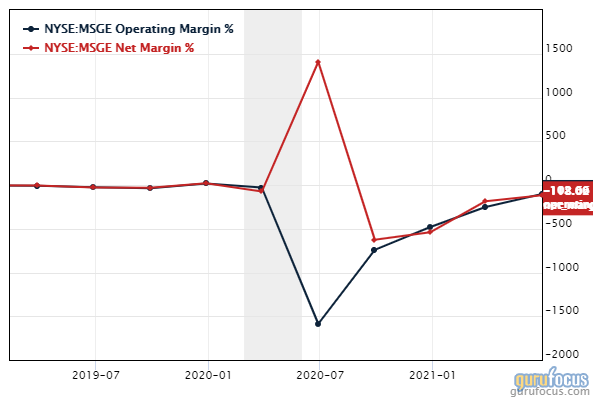 MSG Entertainment has seen the majority of its venues closed for at least part of the past couple of years due to the pandemic, with construction delayed at its MSG Sphere project in Las Vegas. In order to gain enough liquidity to continue funding its growth initiatives, the company acquired regional sports and entertainment company MSG Networks on July 9 in an all-stock transaction. “At current trading levels, MSGE is trading at a 41% discount to our estimate of private market value,” wrote Rogers in a recent letter to shareholders.

The firm increased its investment in Kennametal (

GuruFocus gives the company a financial strength rating of 5 out of 10 and a profitability rating of 6 out of 10. The cash-debt ratio of 0.23 is lower than 83% of industry peers, but the Piotroski F-Score of 7 out of 9 indicates a very healthy financial situation. The company has a three-year revenue per share growth rate of -8.8% and a three-year Ebitda per share growth rate of -17.4%. 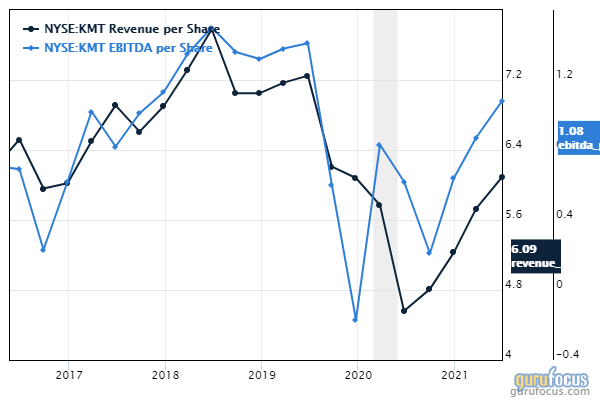 Kennametal is a Pennsylvania-based maker of specialty tools for metalworking, mining and construction. The company’s tools are used in several industries, including automotive, aerospace, earthworks and energy. It also produces industrial materials such as metal powders, ceramics and carbide parts.

The company has seen earnings growth in recent quarters due to heighted demand from the energy and aerospace industries. One headwind has been the automotive sector due to the semiconductor shortage causing production cuts, but this is expected to be short term, with long-term growth on the horizon as the world transitions more to electric vehicles. In his recent letter to investors, Rogers highlighted another driver for Kennametal’s long-term growth: “KMT is executing on its strategic plan to improve economies of scale and generate margin improvement, while gaining share in the marketplace.”