2 Highly Profitable Railroads to Buy on a Pullback

The companies both have very high scores on profitability 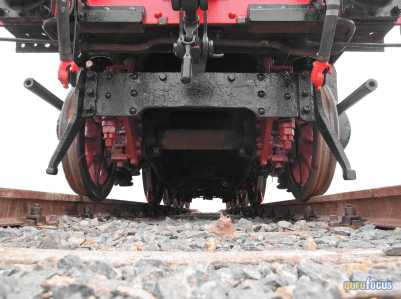 The companies in the railroad industry in the U.S. have several benefits that those in other industries do not. For one, there are incredibly high barriers to entry. The cost and time to replicate the routes needed to be competitive would be immense since a new name in the business would have to be able to touch points throughout the country.

There are other ways to transport goods, but if going by rail, there are just a few names that can provide this service.

While the stocks of railroads can be considered overvalued at the moment, they are, for the most part, highly profitable companies that would make a good addition to an investor’s portfolio at the right price.

We will look at two railroad companies with at least an 8 out of 10 on GuruFocus’ measure of profitability and pay at least a 1% dividend yield.

CSX, Financial) came into existence in the late 1820s as part of the original B&O Railroad. The company started with a humble 13 miles of track, but today covers more than 20,000 route miles across 23 U.S. states, primarily in the Eastern third of the country. CSX generated revenue of more than $11 billion over the last four quarters and has a market capitalization of almost $70 billion. 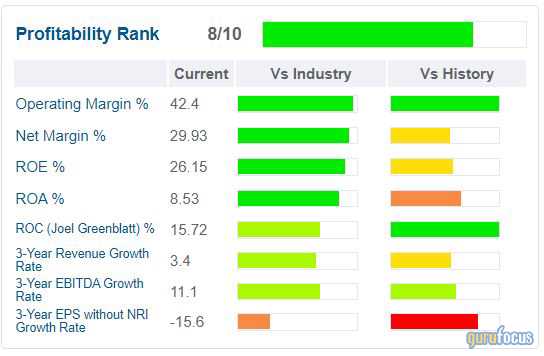 CSX receives an 8 out of 10 from GuruFocus in the area of profitability. The company’s operating margin of 42.4% ranks in the top 97% of the 910 companies in the transportation industry. The operating margin is also at the very top of CSX’s 10-year history. Return on capital is better than more than two-thirds of peers, but also near the top end of its long-term range.

The company also scores in at least the top 93% in the areas of net margin, return on equity and return on assets, showing that its strength is broad based. That said, these scores are all below the company’s median showing for the last decade. The railroad’s three-year revenue growth is above almost two-thirds of peers even if it is in the middle of the long-term range.

One weak spot to is CSX’s earnings per share growth without non-recurring items is negative and near the low end of the company’s 10-year range. This metric also scores lower than 73% of peers.

CSX raised its dividend by 8.3% for the Mar. 15, 2021 payment, extending the company’s dividend growth streak to 16 years. The company executed a three-for-one stock split in June of this year. Adjusting for this, the dividend has increased with a compound annual growth rate of just under 9% since 2011. Shares of CSX currently yield 1.2% versus their long-term average yield of 1.9%.

The new annualized dividend amounts to 37 cents. According to Yahoo Finance, analysts expect the railroad to earn $1.50 per share in 2021, resulting in a projected payout ratio of 25%, which is below the average payout ratio of 31% since 2011. 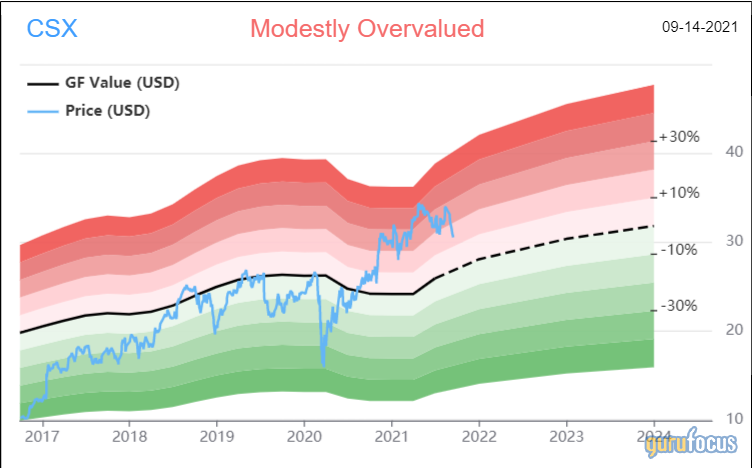 CSX is the major railroad for the more populated eastern portion of the U.S., giving it access to a high percentage of the population. The company is near the very top of its industry in several areas of GuruFocus’ profitability ranking and has a solid history of growing its dividend over the long term. Shares yield less than usual. They are also trading above the historical valuation, but are not overly expensive when looking at intrinsic value. On a pullback, CSX would be a good name to purchase.

NSC, Financial) operates more than 19,400 route miles of track in more than 20 Eastern and Southern states. The railroad is valued at just over $61 billion today and has produced revenue of $10.5 billion over the last year. 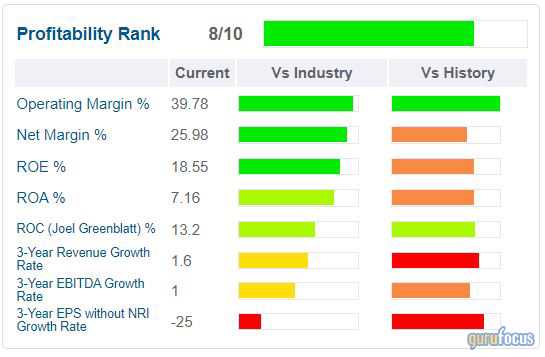 Norfolk Southern also receives an 8 out of 10 in profitability rank. The company has similar strength to CSX as well. Norfolk Southern’s operating margin is lower than its peer, but still tops almost 96% of the other companies in the transportation industry. The company’s current mark is at the very high end of its decade-long range, demonstrating that Norfolk Southern appears to be operating at a very high level compared to its own history.

The net margin bests 91% of peers, while the return on equity is better than 85% of the competition. Return on assets outperforms 80% of those in the same industry. However, these numbers are all in the lower portion of the long-term range. Norfolk Southern’s return on capital places the company in the top 64% of peers and is also well above its own median score in this category.

Norfolk Southern also has a negative earnings per share without NRI, ranking worse than 81% of its peer group. Three-year revenue growth is just above 58% of the competition and very close to the low end of the decade-long range.

The company raised its dividend 10.1% for the Aug. 20 payment date, giving it a dividend growth streak of five consecutive years. This is higher raise than the dividend’s CAGR of 8.5% over the las 10 years. The stock provides a yield of 1.8% versus its 10-year average yield of 2.3%.

The stock has an annualized dividend of $4.36. Analysts predict that the company will earn $11.99 this year, resulting in a payout ratio of 36%. This is right below the average payout ratio of 37% since 2011.

With the stock trading at $244, Norfolk Southern has a forward price-earnings ratio of 20.4. The stock has averaged a multiple of 16.3 times earnings for the last decade. 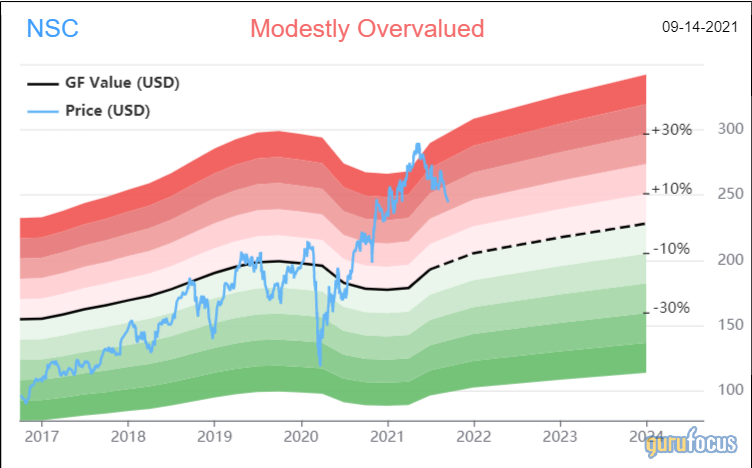 Norfolk Southern has a GF Value of $198.16, giving the stock a price-to-GF Value of 1.23. Shares are rated as modestly overvalued.

The railroad branches out from the Eastern states to the faster-growing Southern states, offering it a growing populace for which to serve. The company performs well on the same metrics as CSX, but does have poorer showing than CSX’s weakest areas. Norfolk Southern has a shorter dividend growth streak, but its most recent raise was higher than average. Both names are overvalued against the historical averages. That said, Norfolk Southern is more expensive than CSX using the GF Value, so a much greater pullback would be needed before I would consider buying the stock.