General Mills Is Having Trouble With Inflation

On a two-year stack basis, results were better as the company has managed to secure repeat customers. The company managed to pass along some of the higher costs from inflationary pressures in the business, but it wasn’t enough, as operating profit still declined from the prior year.

General Mills did raise revenue and earnings per share guidance for the year, but the market was unimpressed, as investors had been hoping for a better outlook. This sent shares lower by 4%.

Let’s look a closer at General Mills’ quarter and valuation to see whether it can overcome inflationary pressures.

General Mills reported fiscal second-quarter 2022 results on Dec. 21. Revenue grew 6.4% year-over-year to just over $5 billion, beating Wall Street analysts' estimates by $163 million. However, adjusted earnings per share of 99 cents compared unfavorably to $1.06 in the prior-year quarter and was 6 cents less than expected.

Organic growth improved 5% for the quarter. Pricing and mix contributed to growth as volumes were flat. Adjusted operating profit was lower by 6%. General Mills was able to raise prices by 7%, but this was more than offset because, despite what headlines might have you believe, inflation has actually been much higher than 7%. in certain areas. Food price inflation, for example, has been higher than 10%. Supply chain issues have also been a headwind. Wages were increased as well, though this was a far smaller impact in comparison to any of the other headwinds and was necessary in order to keep workers from leaving for better-paying jobs.

North America organic growth was higher by 1%. Better price and mix overcame a volume decline of 6%. Double-digit growth in snacks and a 3% improvement in cereal were among the highlights, but meals and baking were down 4%. This region maintained or expanded its market share in the majority of retail categories. Compared to pre-pandemic results, organic sales were up 5%.

Convenience Stores and Foodservice surged 23% as the away-from-home food channels staged a significant recovery from the prior year. The two-year stack rate was 3% growth, showing that this segment is now ahead of where it was pre-pandemic. Schools, restaurants and convenience stores all showed strength during the quarter.

Europe and Australia were down 2% due to weakness is yogurt and dough, but flat for the two-year period. Asia and Latin America improved 5% due to Yoki meals and snacks in Brazil and growth in Haagen-Dazs in China.

The adjusted gross margin fell 330 basis points to 32.2% and the operating margin contracted 200 basis points due to supply chain constraints and inflationary pressures.

General Mills is also attempting to pivot to higher margin businesses. For example, the company divested its European Yoplait brand yogurt business on Nov. 30. This will negatively impact revenue by $700 million and adjusted earnings per share by about 1% over the next year. However, this will allow General Mills to focus on those business that have higher margins, such as ice cream, Mexican food and snack bars. In the short-term, this will impact results, but should lead to higher profitability for the Europe and Australia segment in the long run.

The company provided updated guidance for the fiscal year. Organic revenue is now expected to grow 4% to 5%, compared to the previous estimate of -1% to 3%. Adjusted earnings per share are now projected to range from -2% to 1%, a tiny improvement from the previous range of -2% to 0%.

General Mills had mixed results during the quarter. The decline in operating profit was mostly a result of higher inflationary costs, including input, transportation and wages. These pressures don’t appear likely to abate anytime soon, and inflation will likely only get worse from here.

The good news is that General Mills is seeing higher demand for products even as it raises its prices. 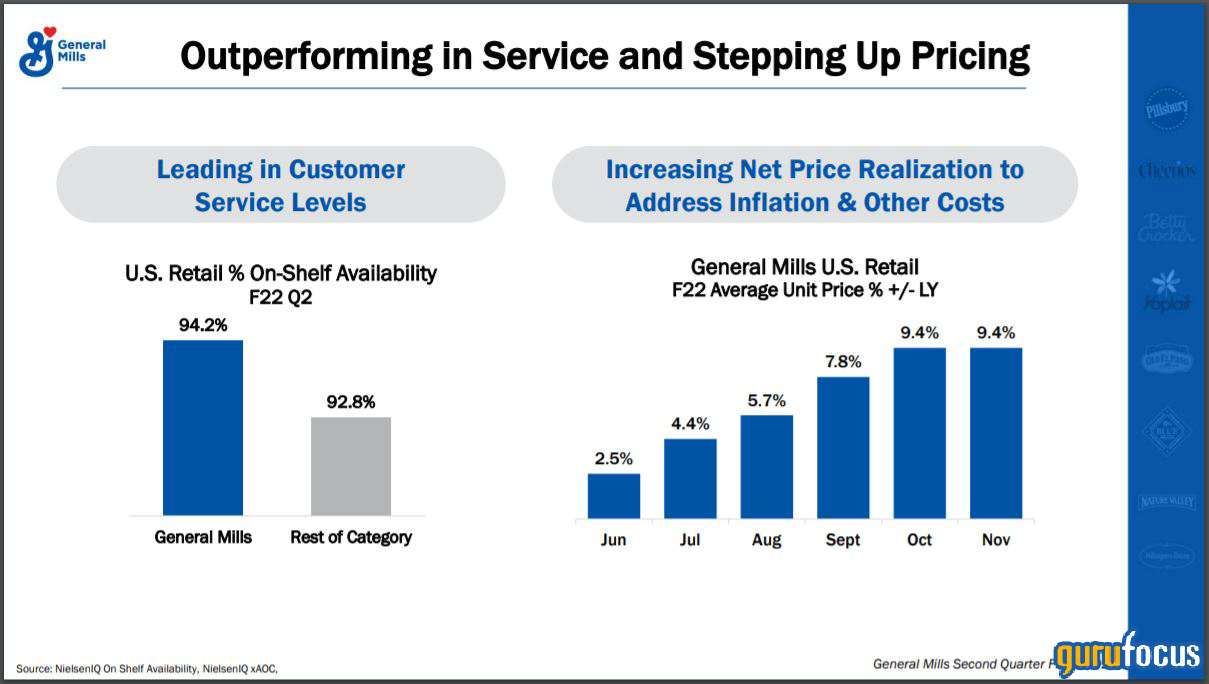 The company has a higher percentage of on-shelf availability compared to the rest of the category. Consumers appear to have no issue paying up for the company’s products either. The average retail unit price has increased each sequential month from June through October before plateauing at 9.4% last month. These price increases haven’t limited demand for products all that much as volume matched the prior year’s result, demonstrating General Mills’ brand loyalty.

General Mills saw heightened demand during the worst days of the pandemic as consumers were forced to eat more meals at home. Given the company’s market position in its industry, it isn’t surprising that consumers favored General Mills’ products over others. The trend of eating more meals at home could be benefitting results, as regardless of price increases, General Mills' products are still much cheaper than eating at restaurants.

What is surprising is that the company is holding on to a large portion of those gains even as social distancing restrictions have eased. Pre-pandemic market share of the U.S. was 55%, which improved to 65% during the past fiscal year. That number dropped just slightly to 62% for the first half of fiscal year 2022. General Mills now holds a higher percentage of market share than it did before the pandemic as the company has held on to many of the customers that it gained last year.

Looking at the GF Value chart, General Mills does look to be trading at too much of a premium to its intrinsic value. 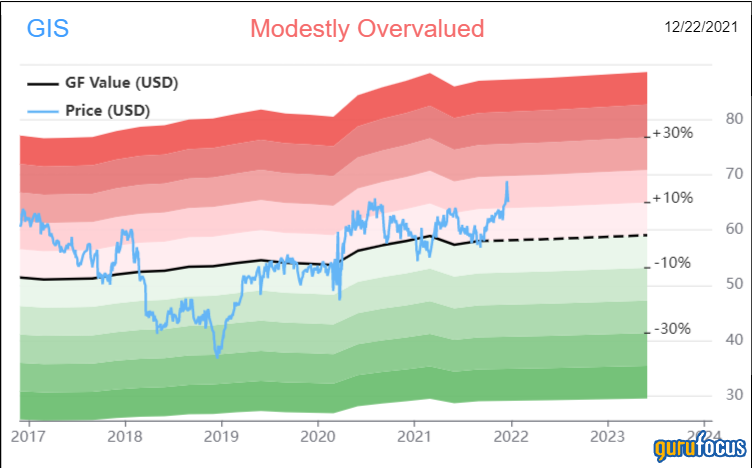 The stock has a GF Value of $58.15, giving General Mills a price-to-GF-Value ratio of 1.12. Shares would have to retreat 10.5% to reach the GF Value. Shares of the company are rated as modestly overvalued.

General Mills’ quarterly report showed that demand for products remains elevated against pre-pandemic periods as the two-year growth rates are mostly positive throughout the company.

The quarter also showed that General Mills is a leader in its industry as shelf availability was above the category average and consumers didn’t rebel against higher prices. This was a positive because the company needs the higher prices in order to offset at least some of the increases inflation has brought to the business.

Income investors will likely take note of the stock’s 3% dividend yield, which is more than twice that of the S&P 500 Index, as well as General Mills’ uninterrupted dividend payments numbering more than 120 years.

Shares are trading higher than the historical average and the GF Value, but not excessively so. The company will likely maintain a consistent business and safe dividend for many years to come.

At this point, however, I am personally inclined to wait to see what inflation looks like in the coming months before adding to my position in the name. If inflation looks like it is subsiding or at least not surging higher, then General Mills can benefit from lower input costs and higher pricing. I am not likely to begin selling the stock any time soon because of its market leadership and its stellar dividend history, but it seems like the company isn't quite able to keep up with inflation. If inflation continues rising out of control, then I think General Mills is more of a hold at the moment.