Conagra: A Name to Own for the Next Economic Downturn 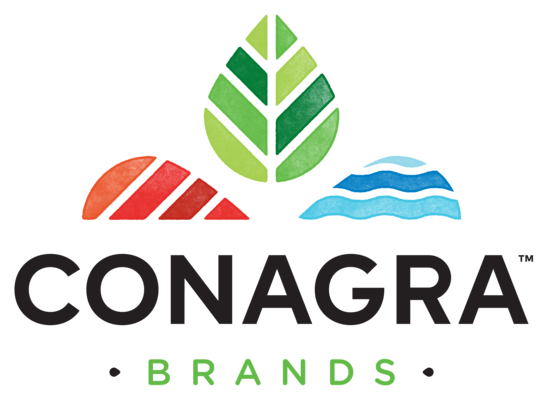 CAG, Financial), a leading distributor of branded food, operates in an industry that often lacks the attention of the financial media given that it operates in a slow growth environment.

That being said, investors shouldn’t ignore this industry in general, or Conagra in particular, as these types of companies tend to offer steady growth, high yields and recession-resistant businesses as consumers need the products regardless of the state of the economy.

We will examine Conagra in depth to see why the stock could be a good defensive name to hold in an investor’s portfolio.

Conagra’s customers include grocery stores, restaurants and various other food service venues. The company generated revenue of just over $11 billion during fiscal year 2021, which concluded at the end of May. The company carries a market capitalization of $16 billion.

The company has a wide variety of products in its portfolio, including popular brands such as Chef Boyardee, Slim Jim, Hunt’s, Birds Eye and Redi-Wip that consumers have come to know and trust over the long term. This has created a fairly loyal following. The company holds the top or second spot in a number of categories, including popcorn, frozen meals, frozen vegetables, meat snacks and multiple pantry items such ready meals, tomatoes, pickles and cake mix.

Like many companies in the food industry, Conagra has had to adjust its portfolio to meet the changing needs of consumers. Consumers are now more conscious about what food and drink they consume than at any other time in history. This presents a challenge to the names in this space.

Conagra has taken steps to address this need. For example, the company owns seven of the top 10 better-for-you frozen meals in the market. Conagra also leveraged its Heathy Choice product line to acquire additional market share during the height of the Covid-19 pandemic. This product line had an 8% market share last fiscal year in this area, showing the company’s Healthy Choice offerings are resonating with consumers. This is meaningful to Conagra as frozen meals contribute roughly a quarter of total annual sales.

Speaking of the pandemic, Conagra, like many of its peers, saw excellent growth as consumers were forced to eat more meals at home during calendar year 2020. Combined revenue for the quarters covering this period of time were higher by almost 10%, a rarely seen figure for a company in the food industry. For context, the company’s revenue totals were largely flat for the 10 years prior to the pandemic.

The pandemic lifted nearly all of the packaged goods companies to new heights, but Conagra outperformed its peers in terms of household penetration. The top 15 names in the industry saw household penetration rate grow 0.4% compared to before the pandemic, but Conagra posted a 0.7% increase. This gain in new customers might not seem impressive, but the company is seeing new customers at almost twice the rate of its chief competition.

What has been very telling is the new customers that the pandemic brought into the fold have largely been maintained. The two-year stake revenue growth rates for the past three quarters were 8.3%, 11.1% and 9.1%. This even includes declines in the fourth quarter of fiscal 2021 and the first quarter of fiscal 2022 as social distancing restrictions eased and consumers were able to eat out more often. Even with the reopening of the economy, Conagra has seen its deeper penetration of its brands expand from the very high levels that occurred during the worst of the Covid-19 shutdowns.

Earnings per share grew just 3% for the decade prior to the pandemic, but growth could be higher moving forward beyond just higher market share. The company has divested non-core assets over the past few years. Conagra sold off its snack segment, which included Snyder of Berlin and Pop-N-Thins, Italian frozen pasta product line and Lender’s Bagel business in 2019. The company also divested its Canadian process fruit and vegetable and edible oil businesses in the previous year. As a result, its profit margin nearly doubled as this metric saw expansion from 5.8% in 2012 to 11.5% last fiscal year.

In addition, Conagra has augmented its core portfolio with strategic acquisitions, the most important of which was the company’s completed purchase of Pinnacle Foods in late 2018. This addition brought brands such as Birds Eye, Duncan Hines, Vlasic, Wish-Bone and EVOL, among others, to the company. This acquisition helped give Conagra a leading market share in a variety of areas that the company didn’t have much of a presence in before.

Another likely to boost results for the company is Conagra’s focus on digital advertising. Working with partners, Conagra has tailored its advertisements to reflect customer purchase habits away from the traditional use of mass advertising. This has allowed for personalized ads reaching customers regarding the types of products that they already buy, making it much more likely that a future purchase will be made. This shift in spending has been noteworthy as the company spent just over a quarter of its advertising budget on digital ads as recently as 2015. That figure shifted to more than 80% in 2020.

A more focused advertising model combined with an increase in the customer base, a paring down of non-core businesses and the addition of Pinnacle Foods is likely to provide continued tailwinds, making Conagra’s business model more attractive today than it has been in a very long time.

Another attractive attribute about the company is its performance in the last recession. Consumer packaged stocks might not offer tremendous growth during bull markets, but they do tend to hold up better in recessionary times. This was the case for Conagra as well.

The following is the company’s earnings per share results for during, before and after the Great Recession:

The company’s brand popularity and market share enabled Conagra’s business to recover very quickly during the last recession. This provides evidence that the next recession could see a similar result.

Given the strength of the company’s portfolio at the moment, it could be argued that today’s version of Conagra could withstand the pressures of an economic downturn even more than its it did the last time.

While the business performance was encouraging during the last recession, Conagra did cut its dividend by 34% in 2007. That said, the company did begin to raise its dividend again, at a modest pace, the very next year.

The good news is that dividend growth has returned in a noticeable way recently. Following two years of steady dividends, shareholders received a 29.4% increase for the final payment of 2020. The next fall, the dividend was raised 13.6%. It took more than 15 years, but shareholders should see a higher dividend per share total for fiscal year 2022 then they did in 2006, which would mark the first year of doing so since the cut made during the Great Recession.

Shares also yield 3.6% currently, almost triple the average yield of the S&P 500 Index and well above the stock’s 10-year average yield of 2.8%. In fact, this would be Conagra’s highest annual yield, if averaged for the entire year, since 2012.

With the stock closing Friday at $34.75, Conagra is trading at 13.9 times the company’s expected earnings per share for the fiscal year. For comparison, the stock has a five- and 10-year average price-earnings ratio of 16.7 and 16.2, respectively. By this measure, shares are undervalued.

The GF Value Line shows the stock to be trading near fair value. 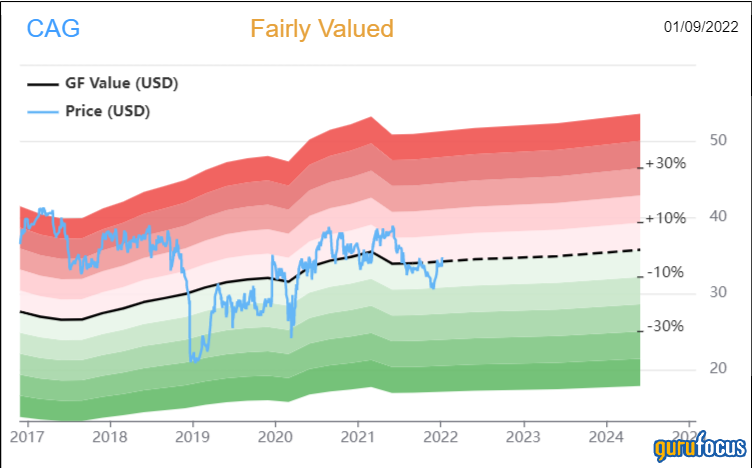 With a GF Value of $34.21, Conagra has a price-to-GF Value of 1.02, earning a rating of fairly valued from GuruFocus.

Conagra is a leading name in what some might consider a boring industry. The company’s business looks far from boring, however, given its position as a top name in the branded food space. Conagra’s products occupy nearly every isle of the grocery store and many brands are ranked number one or two in their respective categories of market share.

A more successful advertising method has paid off for the company, likely playing a significant role in the retention of the customers Conagra gained during the pandemic. The acquisition of Pinnacle Foods has also been a plus for the company, giving it products in categories it underperformed previously.

Topping it off is Conagra’s high dividend yield. It is true that the company has a somewhat checkered dividend growth history, but the dividend looks very safe based on the payout ratio.

Shares are trading at a discount to the medium- and long-term historical valuations. The stock might be near fair value with regards to the GF Value, but the improved business model, prior recession performance and high yield suggest that Conagra is a name investors want to be holding when the next economic downturn takes place.