Does the stock offer good value at a three-year low?

The company's bull case lies in the fact it operates as the sole source supplier for many of the markets it operates in.

The bear case is that the nuclear industry is highly capital intensive. Capital expenditure and multiyear revenue are lumpy and big projects roll in and out. Typically, there is a single customer, the U.S. Navy. I think there is also a large risk of cost overruns on projects, which the company may have to absorb partially or fully thus triggering large write-offs.

"The company’s stock came under pressure in the quarter after posting results that were below consensus expectations driven by Covid-related disruptions domestically and timing of projects and lower government reimbursement in Canada. Despite these challenges, the stock remains attractive as the company is nearing an end to an elevated capital expenditure cycle that supported the growth of the Navy’s shipbuilding needs. This should lead to accelerating free cash flow generation that could be used for share repurchases and dividend increases."

BWX Technologies in its present form was created when the company formerly known as The Babcock & Wilcox Co. (B&W) completed the spinoff of its fossil fuel power generation business, which is now known as Babcock & Wilcox Enterprises Inc. (

BW, Financial). As can be seen below, the nuclear business prospered while the fossil fuel power generation business floundered after separating (though it now appears to be recovering). 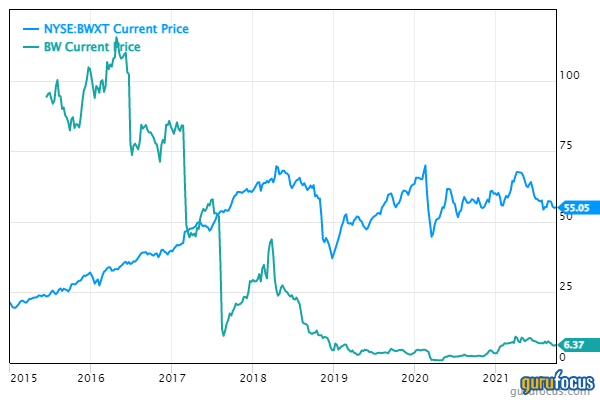 However, since peaking in 2018, BWX Technologies' stock has been trading in a channel and is currently near three-year lows. So does the stock offer good value?

I don't think so because, at best, the company seems to be "fairly valued" and does not offer the margin of safety I require. I have two major problems with this company.

First, the long-term debt keeps on increasing and has quadrupled since 2015. 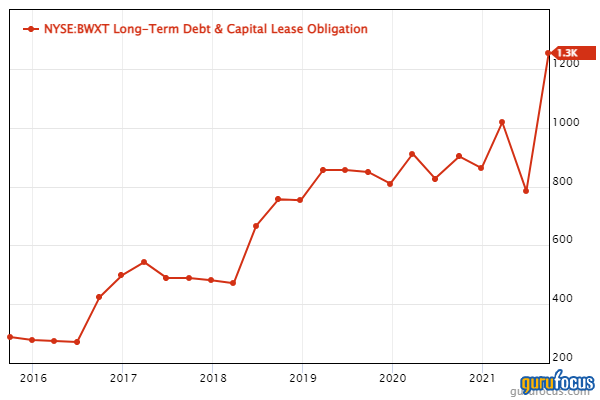 Second, there is a persistent gap between free cash flow and net earnings. The gap appears to be growing. I don't like that as it is an indication cash coming in is a lot less than the accounting earnings the company is showing. While the company says this is because of increased capital expenditure in the business, I want to see the free cash flow line start coming in line with net earnings. 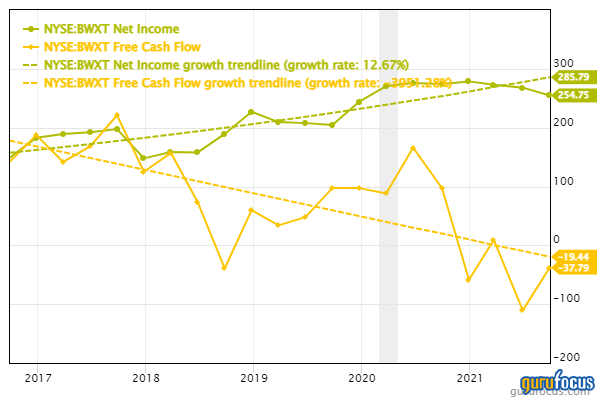 There has also been a marked slowdown in the company's top and bottom line.

While BWX Technologies has a strong "bull case" as a sole source nuclear reactor supplier to the U.S. Navy, I am leery of the dramatically increasing debt and capital expenditure. While clearly the U.S. government has great interest in seeing this company remain in business and will ensure its survival, this is certainly not the case for the current shareholder base. If the company gets into trouble, the government can take it into conservatorship (nationalize it), but mostly wipe out the equity holders. This happened to Freddie Mac (FMCC), Fannie Mae (FNMA) and AIG (AIG) in 2008, who were considered systemically important. The companies survived, sans the shareholders. As such, my current plan is to put this stock on a watchlist and see if the situation improves over the next few quarters or a better margin of safety develops.