The 'Next Warren Buffett' Is Loading Up on This 5G Stock

Seth Klarman, who has been called the 'Next Warren Buffett,' has been buying Qorvo

Ben Alaimo
Feb 15, 2022
Bookmark
Summary
Seth Klarman (Trades, Portfolio) is a classic value investor and has been dubbed the “Next warren Buffett” by some. The founder of the Baupost Group has over $10 billion in assets and holds 53 stocks in his firm's common stock equity portfolio.

I have been tracking Klarman for a number of years now and noticed that he has been repeatedly adding to one stock in particular: Qorvo Inc. (

What does the company do?

Qorvo has an enviable customer base that includesApple (AAPL), which accounts for 33% of revenue, and and Huawei, which supplies 10% of revenue. These companies purchase RF solutions for their respective (and widely popular) mobile devices. While these companies are strong, there is a risk for Qorvo that comes with lack of diversification - a third of its revenue comes from one customer.

The company has also recently announced that it will supply an ultra wide band UWB solution for the Android smartphone. It will be good to see more revenue coming from non-Apple sources. The risk of having all your eggs in one basket cannot be underestimated; if Apple’s latest iPhone flops, for example, it may decide not to continue as a customer of Qorvo.

The scarcity of semiconductors and the supply chain constraints have recently made headlines. This has caused a major trend away from globalization and towards localization of supply chains, since countries who outsource most of their manufacturing are realizing the risk of this model in times of shortages. This is especially important for parts which may be deemed as a national security risk.

INTC, Financial) planning to announced that it will spend $20 billion to build two new chip factories (fabs) in Chandler, Arizona. Qorvo is on a much smaller scale compared to Intel with a $14 billion market cap, but it already has better supply chain localization. The company has a balance of internal and external sites which help to reduce cost and improve the flexibility of supply. Qorvo has primary wafer fabrication facilities in North Carolina, Oregon and Texas in addition to its primary test facilities in China, Costa Rica and Germany.

As a value investor, Klarman likes to invest into companies with competitive advantages, or a moat.

Is the stock undervalued?

Klarman's Baupost owns 5.58% of the company and has been buying shares at an average price of $158 per share recently.The stock is down 18% from the levels he was buying and thus could be undervalued. 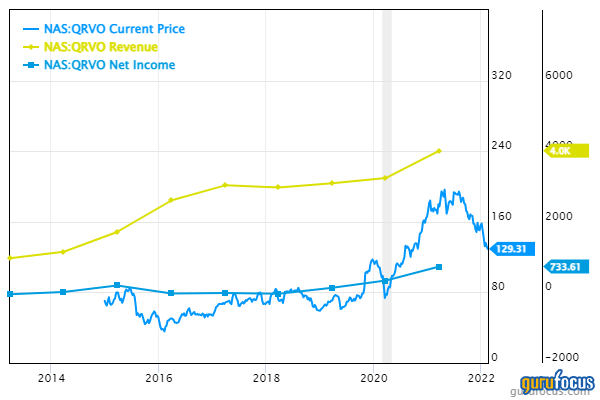 In order to value this stock, I have plugged the latest financial numbers into my valuation model, which uses the discounted cash flow method of valuation.

According to the Qorvo CEO in their recent financial results:

"At the midpoint of our March guidance, we project our full fiscal year revenue growth to exceed 15%, operating margin to expand to over 33%, and earnings per share to grow 25%."

I have the utmost faith in Qorvo's management, so I have plugged in its guidance for revenue growth, though I have made a more conservative operating margin projection of 27% in three years. 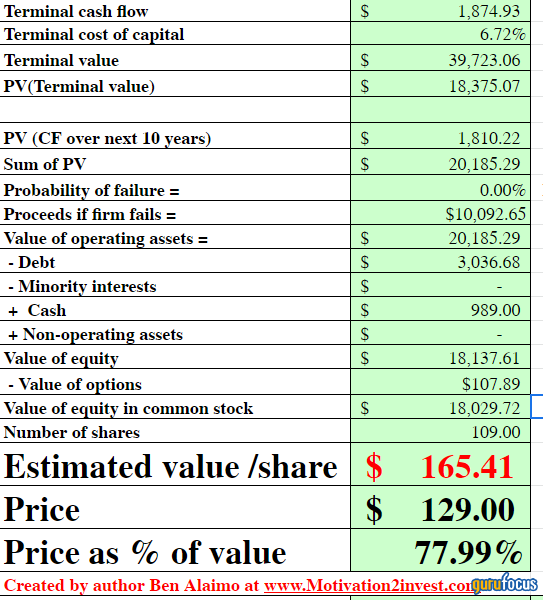 From this, I get a fair value estimate of $165 per share. This is slightly above the price Klarman was buying shares at $158 and means the stock is 22% undervalued at the current price of $129 per share. This gives a significant margin of safety, which is what Klarman is known for!

Qorvo is a very interesting company and a market leader in manufacturing and supplying RF devices. The company seems to have somewhat of a moat given its number of patents. They have an envious customer base of leading smartphone manufacturers such as Apple and Huawei.

The risks to this business are the concentration of customers and the fast-paced nature of the semiconductor industry. For example, we saw Intel fall from grace after failing to keep up with competitors in terms of innovation, and it lost out on the fabrication business to Taiwan Semiconductor Manufacturing (

TSM, Financial). However, despite these risks, the stock is 22% undervalued based on my estimates and thus could be a potential value opportunity.
Also check out: