Why Qualcomm Still Has Potential

QCOM, Financial) has fallen 19% since last reporting earnings results at the beginning of February. The stock is also more than 21% off of its 52-week, placing Qualcomm in bear market territory.

Technology as an industry has had a very difficult time as of late, with the iShares U.S. Technology ETF (

IYW, Financial) dropping 12% in this same period, but Qualcomm is clearly having a more difficult time compared to its own sector.

That said, the company does have many positives working in its favor. This article will examine why I believe that Qualcomm could make for an intriguing investment opportunity for those with a long-term view.

As with the fourth-quarter of fiscal year 2021, growth was broad based for the company. Revenue for Qualcomm CDMA technologies, or QCT, grew 35% to $8.85 billion. Handsets sales were up 42% to $6 billion, with much of this growth coming from higher chips sales for Android devices as the 5G rollout continues.

The Internet of Things business improved 41% $1.5 billion. All areas of this segment were up at least 30% from the prior year. The Consumer segment benefited from the doubling of Android tablet sales while Edge Networking remains the leader atop Wi-Fi solutions. Industrial benefited from recent product launches, with the expectation of more product launches to occur this year.

Revenue for RF front-end grew 7% to $1.1 billion, with this segment benefiting from modem-to-antenna solutions across other businesses. Automotive was up 21% to $256 million due to partnerships with key automotive makers.

Qualcomm Technology Licensing, or QTL, experienced revenue growth of 10% to $1.8 billion due to gains in licensing agreements.

Qualcomm repurchased $1.2 billion worth of shares during the quarter as well. In addition, shareholders will see their quarterly dividend rise 10.3% to 75 cents for the upcoming March 24 payment, extending Qualcomm’s dividend growth streak to 20 years. Shares yield 2% currently.

The company provided an outlook for the second quarter of fiscal 2022 as well, expecting revenue of $10.2 billion to $11 billion and adjusted earnings per share in a range of $2.80 to $3.00. The midpoint for QCT revenue is $9 billion, which would be a 43% improvement from the same period of the last fiscal year. QTL revenue is expected to be essentially flat at $1.55 billion. According to analysts surveyed by Yahoo Finance, the company is projected to earn $11.84 of adjusted earnings per share in fiscal year 2022.

Qualcomm came in much higher than its anticipated midpoint for adjusted earnings per share of $3.00 and close to the top end of its revenue guidance as all areas of the company are seeing growth.

5G continues to drive growth for Qualcomm as handset sales, in addition to being higher year-over-year, were up almost 28% on a sequential basis as the company’s products continue to resonate with customers. QTL also has more than 150 license agreements related to 5G, which should power this business higher as more customers switch to devices capable of accessing the service.

The company recently announced that it would be providing the Snapdragon 8, its most advanced 5G mobile platform, for many of the top names in smartphones. This should be a tailwind to results as revenue from Snapdragon chipsets were up more than 60% in the most recent quarter.

Considering these factors, Qualcomm clearly has positioned itself to take advantage of the transition to 5G. According to leadership estimates, roughly 525 million 5G handsets were sold last year. This represented close to 40% of total handsets sold during 2021. By 2024, the company expects that 5G handset units will more than double and represent 85% of total handset unit shipments. This illustrates just how important 5G will become to the industry.

RF front-end is also seeing an increase in demand from 5G to go along with its launch of its latest modules. The Automotive business also continues to act well and partnerships with General Motors Company (

GM, Financial) and BMW (BMWYY, Financial), along with a new agreement with Renault Group (RNSDF, Financial), gives Qualcomm a sizeable presence in the automotive industry. As cars become more advanced, the need for technological advance components will only increase, giving Qualcomm another avenue with which to grow.

Qualcomm’s guidance for the second quarter shows that the leadership expects its largest businesses to continue to perform well. The company also has a history of under-promising and over-delivering. The most recent quarter is an example of this, but the company hasn’t missed earnings estimates in more than five years and has missed revenue guidance just once in the last 10 quarters. This could mean that the company’s guidance for the quarter is again conservative.

With shares closing the most recent trading session at $152.34, Qualcomm has a forward price-earnings ratio of 12.8 using analysts’ estimates for the fiscal year. According to Value Line, the stock has a 10-year average price-earnings ratio closer to 16, placing shares of the company at a discount to their typical valuation.

The GuruFocus Value chart says that the stock is fairly valued: 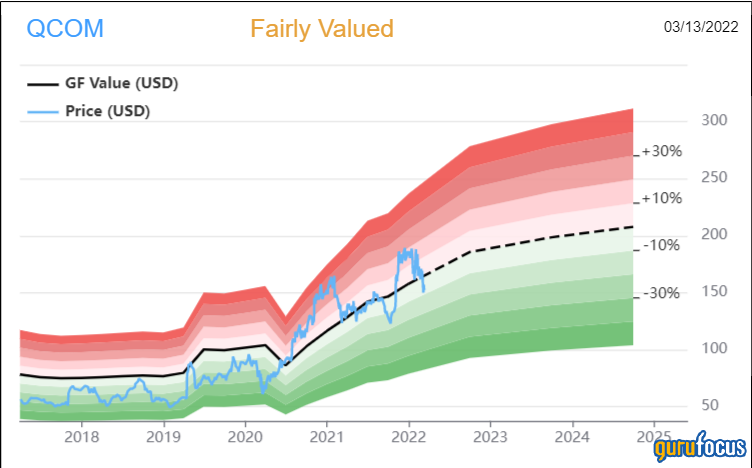 Qualcomm has GF Value of$165.04, resulting in a price-to-GF-Value of 0.92. Shares would return 8.4% if they were to reach their GF Value. Factor in the dividend and total returns could reach above 10%.

Qualcomm easily beat estimates for both revenue and earnings per share in the most recent quarter as every segment saw year-over-year growth. Still, the stock is well off of its 52-week high even as Qualcomm is well positioned to take advantage of the growing demand for 5G capable devices.

Even with the immense tailwinds from 5G and robust growth throughout the company, Qualcomm is still trading well below its average historical valuation. Shares look slightly undervalued relative to their GF Value as well. Add in a growing dividend and total return potential is in the low double-digit range by my estimates.