GuruFocus had the pleasure of hosting a presentation with Ben Claremon, principal and portfolio manager for the Classic Value, Small Cap Plus strategy at Cove Street Capital.

Claremon joined Cove Street in 2011 as a research analyst and is currently a principal and the portfolio manager for the Classic Value, Small Cap PLUS strategy. Previously, he worked as an equity analyst on both the long and the short side for hedge funds Blue Ram Capital and Right Wall Capital in New York.

Prior to that, he spent four years with a family commercial real estate finance and management business. Claremon was also the proprietor of the value investing blog The Inoculated Investor, and is now the host of the podcast “Compounders: The Anatomy of a Multibagger.” His background includes an MBA from the UCLA Anderson School of Management and a B.S. in economics from the University of Pennsylvania's Wharton School.

Claremon kicked off his presentation with a brief review of the Los Angeles-based firm and its strategy, noting it focuses on small/SMID cap U.S. value in a concentrated number of positions. He emphasized that the firm bases its evaluations of stocks on three pillars, which are business, value and people.

In regard to its investment philosophy, the firm takes a fundamental, research-driven approach and concentrates on its best ideas to create long-term value.

Claremon then transitioned to provide an update on Viasat Inc. (

VSAT, Financial), which was one of the stocks he discussed during his last appearance on Value Investing Live over a year ago.

While the stock has had a bit of a bumpy ride over the past year due to disruptions caused by the Covid-19 pandemic, Claremon said Viasat is arguably one of the “most compelling” investment opportunities in the firm’s history. It also remains the largest position in Cove Street’s small-cap strategy.

TIGO, Financial), a Latin American telecommunications company. He said that while the company has had it rough in the recent past, its current valuation and growth trajectory present a compelling opportunity. 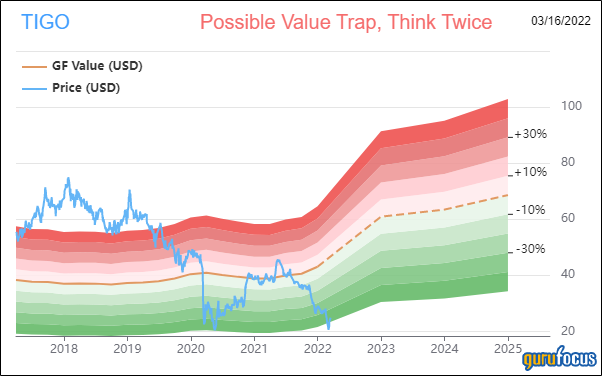 While the Covid-19 lockdowns had a negative impact on Millicom’s Ebitda and free cash flow, the company had a solid year of recovery in 2021 with large investments in wireless spectrum and new homes passed for its cable business. Millicom also recorded a rebound in its revenue and Ebitda.

The questions Claremon answered were mostly connected with his two stock picks.

One asked about Viasat’s leverage, which is set to increase even further with its pending merger of Inmarsat. Claremon responded by taking the company out of the satellite realm and instead made an analogy to a real estate developer. While that real estate company may look highly levered after constructing a new building, it pays off its loans as businesses move in to the space. Similarly, Viasat has built three satellites simultaneously that will eventually launch and create revenue for the company.

Another question was concerned with how currency and foreign exchange will impact Millicom. Claremon acknowledged that foreign exchange rates have been a drag on the company’s profitability, especially Colombia where it doesn’t have the leading market position. While the company has seen strong growth in local currency, it is not translating to U.S. dollars. However, it is a market leader in all the other markets it operates in, some of which are dollarized. He also noted that Millicom is working to improve its positioning in Columbia, but that will likely take some time.