Sunnova: Does This Growth Stock Have a Bright Future?

With an increasing focus on reducing the effects of climate change, the world's reliance on fossil fuels is expected to decline. Solar energy is poised to fill the gap moving forward.

According to Allied Market, the global solar energy industry was valued at $53 billion in 2018 and is expected to reach $223 billion by 2026, a compound annual growth rate of 20.5%. In addition, the International Energy Agency says the global renewable electricity capacity is forecast to increase by over 60% (4800 GW) from levels required in 2020, with solar photovoltaics providing approximately 50% of this energy. Even President Joe Biden has a plan to increase U.S. dependence on solar power.

The popularity of the alternative power source is being pushed by climate change and pulled by the falling costs of PV cells, which make up solar panels. Since 2010, the cost of solar electricity has fallen a massive 85%, which now makes it cost-competitive with fossil fuels. In addition, rising fossil fuel costs in the short term, thanks to the Ukraine-Russia conflict, should increase the attractiveness of solar energy.

As such, I am going to dive into Sunnova Energy International Inc. (

NOVA, Financial), a company that could be poised to ride this trend.

Sunnova is a leading residential solar company based in the U.S. The company has over 195,400 customers as of the end of 2021, triple the number of customers compared to 2020. The great thing about solar customers is the purchase contract length is very long. Sunnova’s customers have a 22.4 years weighted average contact life remaining, according to the fourth-quarter 2021 presentation, which means stable cash flows are expected.

The company has a vision to create an “adaptive home,” which will integrate solar, battery storage, energy control and even electric vehicle charging. Thus, it can take a “land and expand” approach with its existing customer base, offering a multitude of energy products.

Why are solar panels attractive?

Governments around the world are investing huge sums to encourage the transition toward renewable energy. President Biden recently announced a plan to make 45% of the U.S. energy supply come from solar by 2050, so solar panels will gradually become more accessible to consumers.

While combating climate change is a common concern, solar offers even more benefits to the average homeowner. According to EnergySage, most homeowners can break even on an investment in solar panels in as little as seven to eight years. After that, you can essentially get free energy thanks to net metering, where the excess energy is effectively stored as credits by the electricity grid.

The decline in share price was mainly driven by the macro issue of high inflation and a suspected rise in interest rates. This increases the discount rate and compresses the valuation multiples of growth stocks as their cash flows are more weighted toward the future. 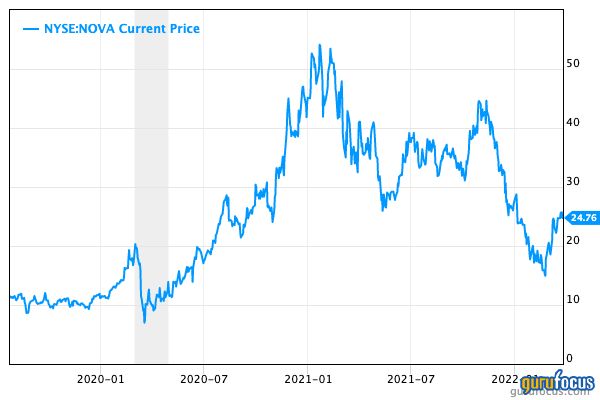 Sunnova’s revenue has grown 50% over the past year. However, the company is still operating at a loss, losing $64 million in 2021. The good news is the company expects to reach profitability by 2023. In addition, it has a strong balance sheet with a current ratio of 1.9, indicating it has nearly 2 times the short-term assets (cash) to cover any liabilities. 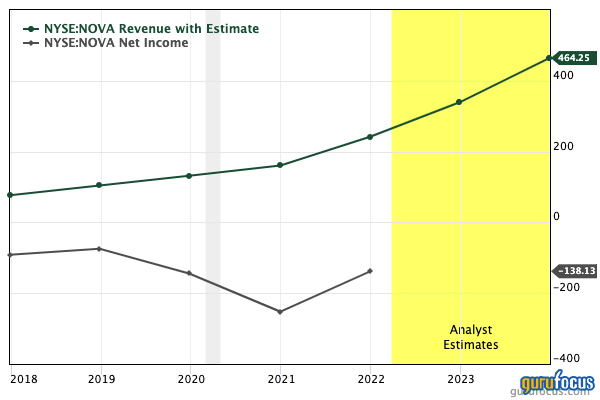 Is the stock undervalued?

The GF Value Line, which analyzes a company's historical ratios as well as an adjustment factor for past financial performance and future earnings projections, indicates the stock is modestly undervalued currently. 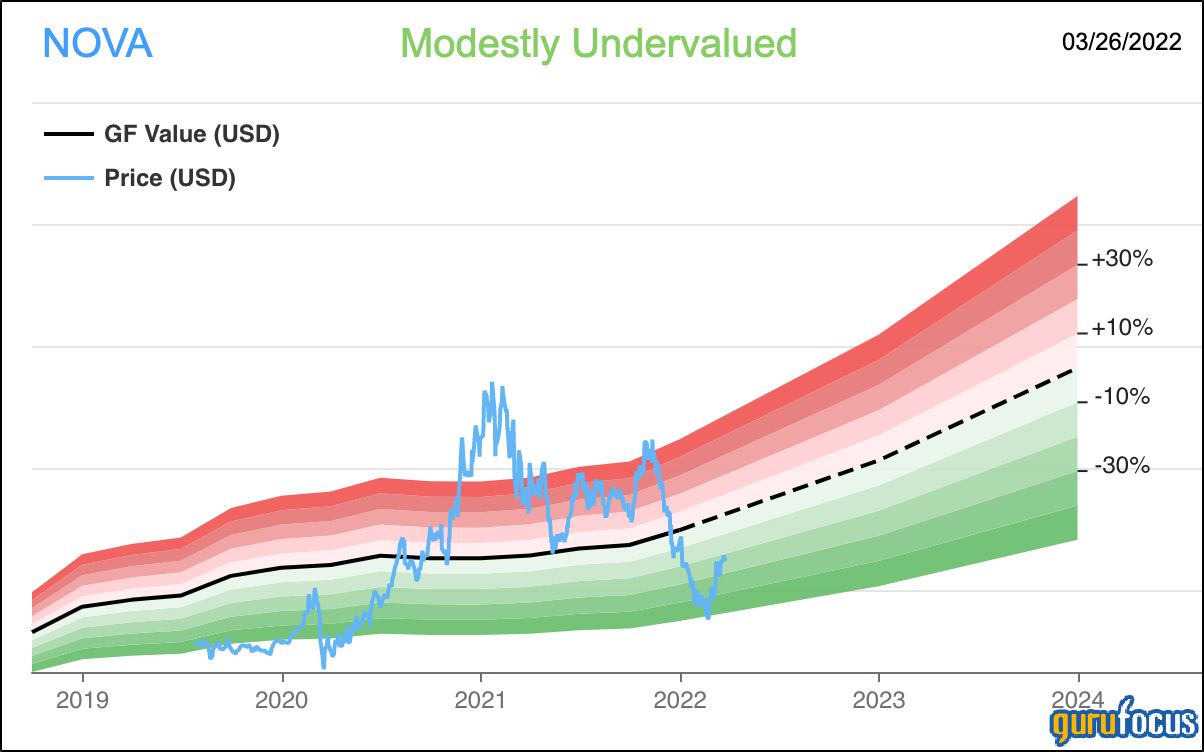 As for gurus invested in the stock,

Steven Cohen (Trades, Portfolio) boosted his stake while Jim Simons (Trades, Portfolio)' Renaissance Technologies entered a position at an average price of $35.97 per share in the fourth quarter of 2021. The stock is now down 34% from these levels. It must be noted that Simons is an algorithmic trader, so his firm may have sold out since then.

Sunnova is a leader in the solar energy industry and is poised to ride the wave of investments spurred by U.S. climate initiatives. The company's financials are growing strong and the valuation is low relative to historical levels. However, high inflation and the rising interest rate environment is affecting the valuation of all growth stocks, so I would expect some suppression in the short term. Regardless, the company's future looks bright.