Swiss drugmaker hoping to cut expenses by $1 billion by 2024

NVS, Financial) investors hope the organizational changes the company is making can shake loose some shareholder value. Since February 2020, Novartis stock has dropped nearly 12% while the Invesco Dynamic Pharmaceuticals ETF (PJP, Financial) has climbed more than 25%.

To this end, the Swiss pharmaceutical giant is meshing its pharmaceuticals and oncology groups into an innovative medicines (IM) unit to simplify its structure and thinks the move will save at least $1 billion by 2024.

The company also says the changes should result in at least 4% sales growth in constant currency through 2026 and expects to produce at the high end of its innovative medicines margin guidance of the high 30% range in the medium term and in the 40% range or higher in the mid- to long-term.

Novartis said its new structure will enable the company to bring “increased focus and commitment” to the company’s core therapeutic areas of cardiovascular, hematology, solid tumors, immunology and neuroscience. The company is also creating a unit for its U.S. business, aiming to become a top-five U.S. drugmaker as measured by sales.

CEO Vas Narasimhan said the new organizational model is central to the company’s growth strategy through the bolstering of its R&D pipeline. He said it will make the company more agile and competitive, while also enhancing patient and customer orientation. 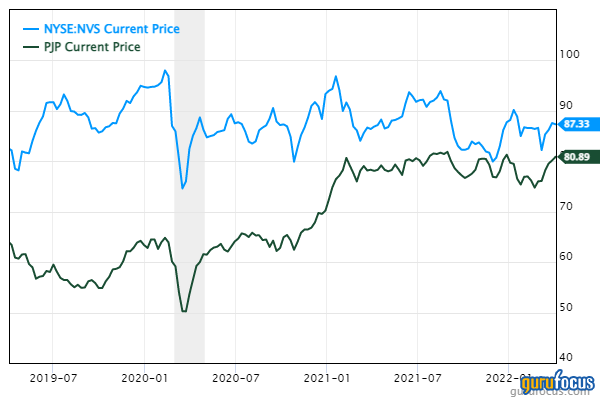 Narasimhan pointed out that Novartis thinks it has 20 pipeline medications that could be approved by 2026.

Not everyone at Novartis cheered the changes. Three executives were caught in the crossfire and were asked to turn in their playbooks, among them Susanne Schaffert, the head of Novartis Oncology.

A key outside addition is Shreeram Aradhye, who will become Chief Medical Officer. He most recently served as CMO at Dicerna Pharmaceuticals, which was acquired by Novo Nordisk (

NVO, Financial). It’s thought that bringing Aradhye on board could mean the company plans to get more serious about RNAi therapeutics, an innovative new class of medicines based on RNA interference.

ALNY, Financial). During a recent investor event, Narasimhan highlighted RNA therapy as one of the company’s key technology platforms alongside cell and gene therapy and radiopharmaceuticals, reported Fierce Pharma.

Novartis is trying to unload its Sandoz generics unit but has had no luck so far. The biggest obstacle seems to be the price - $25 billion for a business with declining revenues, a trend that isn’t expected to turn around until 2023, according to SWI swissinfo.ch.

Narasimhan said the Sandoz issue should be resolved by the fourth quarter, adding that the unit has piqued the interest of private equity as well as other generics manufacturers.