QCOM, Financial) is a leading player within its domain, specializing in developing and commercializing foundational technologies and products for mobile phones and other wireless devices. The company is helping billions of people connect, compute and communicate worldwide with everything from network equipment to broadband gateway equipment to consumer electronic devices.

After the ,market-wide bull run of semiconductor stocks given the global chip shortage and the surge in demand for electronics, Qualcomm has seen its stock move sideways for the past few months. I believe the current stock price has become undervalued; here's why.

Qualcomm has a strong base of intellectual property related to wireless communications technologies, which began with 3G and CDMA networks and later evolved into 4G LTE and 5G networks that are now commonplace. The company can charge device manufacturers a royalty fee based on a percentage of the price of each device sold, thanks to its vast patent portfolio in 3G, 4G and 5G.

Qualcomm is one of the pioneers in 5G network development. Due to the ongoing rollout of 5G, Qualcomm's licensing business is expected to continue driving strong cash flows.

Despite the company's 2019 settlement with Apple (

AAPL, Financial) and 2020 settlement with Huawei, the risk of adverse effects on royalty revenue has increased due to government investigations into the business model. Qualcomm has managed to withstand these inquiries while maintaining adequate royalty rates, and this might continue into the future, though the risk here is very real and is likely contributing to the depressed valuation.

Over and above the 5G upside, the company also designs chips for smartphones. This side of the business is relatively less profitable with more competitive threats, but it is expected to benefit as 5G smartphones become more widely available in the coming years. The company’s pivot into non-smartphone markets like automotive and IoT (Internet of Things) could drive future revenues as well.

Given the extraordinary and staggering impact of the pandemic, semiconductors have been seeing a surge in demand across the globe. As the global semiconductor industry continues to recover from the trade war between the United States and China, which was followed by Covid-19 induced production shutdowns and long-term supply chain issues, there are a number of major drivers of growth, such as the increased consumption of electronics, 5G implementation and the growing popularity of IoT technologies.

As per the forecasts of Fortune Business Insights, this industry is expected to grow at an annual rate of 8.6%, from $452.25 billion in 2021 to $803.15 billion in 2028. Apart from the increasing utilization of consumer electronics devices and new technologies such as artificial intelligence and machine learning, one of the biggest drivers is the rising demand for faster and more advanced memory chips in industrial applications. As a leading chips company, Qualcomm is expected to benefit heavily from these macroeconomic factors.

Qualcomm has recently been demonstrating its increased focus on content growth in the 'extended reality' (XR) industry. The company’s Snapdragon Spaces platform and Pathfinder Program, which gives XR app developers early access to hardware and technical resources, have already made XR content space waves. Qualcomm has announced a wide range of new Snapdragon Spaces partners, ranging from studios to operators.

With its latest announcements, Qualcomm is doubling down on Snapdragon Spaces. They unveiled their newest processor, the Snapdragon 8 Gen 1 chipset, in the previous year and are expected to launch the next version in the next couple of months, which likely uses Taiwan Semiconductors’ (

Among other updates, Qualcomm Ventures, its venture capital arm, will launch a $100 million Snapdragon Metaverse fund in collaboration with Qualcomm's XR business unit to fund Metaverse startups focused on content and core technologies that could enable them. It aims to catalyze content, core AI and XR technologies to enable next-generation apps in gaming, health, entertainment, education and business. Through Qualcomm Ventures, the company is also funding a grant program closely linked to the Snapdragon Spaces Pathfinder Program that also includes grants. Overall, Qualcomm’s intentions to accelerate XR and the Metaverse are clear through all these initiatives. 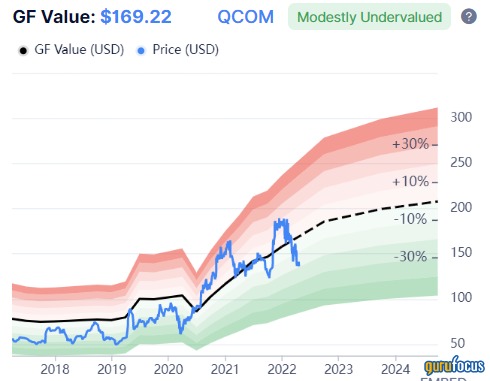 As we can see in the above chart, Qualcomm’s stock has witnessed a correction after the initial urge of semiconductor stocks, and the company appears undervalued as per the GF Value rating. This is re-affirmed by the company’s forward price-earnings ratio of 11.7 and its enterprise-value-to-Ebitda multiple of 11.51, both of which are well below the semiconductor industry average. This seems like a low valuation considering that Qualcomm has a lot of interesting products coming up, and I believe that the current price could represent a value opportunity.