Retail is a notoriously low-margin business. Not only is competition fierce, moving goods from point A to point B is expensive, and if a product doesn’t sell well, then the investment was all for nothing.

As supply chain difficulties have come into focus due to the pandemic, some retailers have been trying to build out their own supply chain networks, but their success has been hampered by lack of scale. Most retailers don’t have anywhere near the scale advantage of the likes of Amazon (

AMZN, Financial) or Walmart (WMT, Financial), meaning building out their own supply chains has little to no chance of being profitable due to the immense initial investment and limited returns.

This means they must continue to compete not only in terms of products but also for things like delivery windows, boxes and space on cargo ships. Due to less efficient supply chains and longer shipping times, this has even contributed to more business flowing towards mega-retailers like Amazon, hurting all smaller retailers.

One enterprising small-cap retailer may have finally found a solution to this problem. American Eagle Outfitters Inc. (

AEO, Financial), a Pennsylvania-based teen-focused fashion retailer with a market cap of only $2.59 billion, is quietly acquiring supply chain businesses in an effort to build out a logistics platform that other companies, including its direct competitors, can utilize.

Improving supply chain scale just for itself might not be effective, but improving it for the retail sector at large could be profitable for American Eagle and entice more business away from mega-retailers towards smaller retailers. This strategy still has a ways to go before it can be a major growth driver, but the potential is there, and more importantly, it’s already showing signs of paying off.

American Eagle’s supply chain efforts date back to before the pandemic brought such things into the spotlight. Since chief supply chain officer Shekar Natarajan joined the company three and a half years ago, American Eagle has acquired two supply chain businesses and begun the process of building out a logistics platform.

Specifically, in May 2021, American Eagle acquired Seattle-based parcel shipping start-up AirTerra for an undisclosed amount. In November 2021, it announced the $350 million purchase of Quiet Logistics, which operates a handful of distribution centers in the U.S. These acquisitions form the basis of American Eagle’s internal logistics platform, called the “Quiet Platform,” which operates separately from the retail operations.

By providing a logistics platform not just for itself but for other retailers as well, the company aims to dilute costs for everyone. Competitors can either try the same thing, continue on with higher logistics costs or rely on American Eagle’s platform for their supply chains in the long-term, though the chances of another company taking up the first option are currently low, since most will be waiting for American Eagle to either succeed or fail in this endeavor first.

Natarajan seems to have confidence that the logistics bet will pay off in the long-term, referring to American Eagle’s communal supply chain platform as the ultimate “frenemy network.”

“The only way that you could actually have Amazon-like scale, Amazon-like costs and Amazon-like capabilities - you have to share,” said Natarajan. “Collectively, we can have the same [package] volume as Walmart… And that way, companies are only competing on what they do best, which is the product, marketing and customer experience.”

In theory, being able to rely on its own supply chain would reduce overhead for American Eagle, improving inventory management, mitigating markdown risk, controlling costs and improving margins.

While this may just be theory for smaller retailers, though, it is already a reality with mega-retailers like Amazon and Walmart. The model is already there; it’s just a matter of implementing it in a collaborative manner among enough retailers.

American Eagle’s logistics platform might still be far away from reaching its full potential, but it is already having positive effects on the business’ margins and profitability. According to chief operating officer Michael Rempell, “Not only are we shipping less packages and it’s costing us less... but [orders] are getting to customers 30% faster than they were before… We see it as a tremendous business opportunity.” 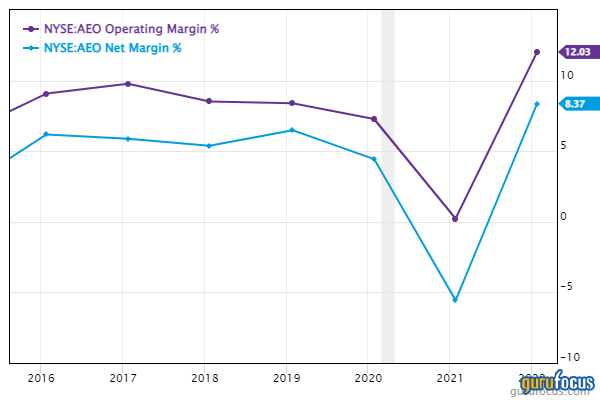 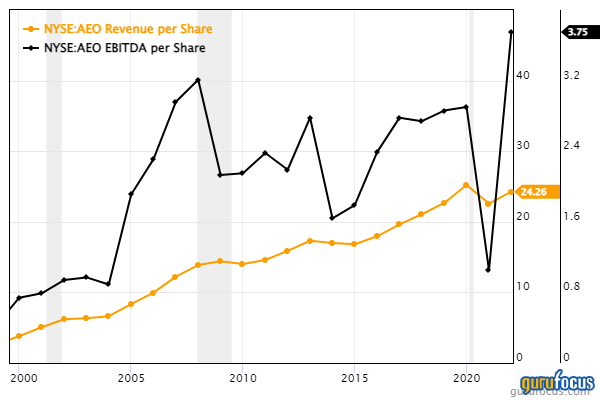 Despite American Eagle’s long-term plans showing the potential to pay off, the retail sector as a whole is not in a good position right now due to high inflation and the ending of Covid-19 monetary stimulus programs.

The problem is, monetary stimulus is unable to create economic growth; all it can do is pull forward demand by creating incentives to spend now rather than later and cause the illusion of growth thanks to more money being printed. The downside of this is that the market will eventually have to pay for the monetary stimulus via high inflation, which increases the costs of goods and services, thus reducing demand for optional purchases like new clothes.

The negative effects of high inflation on the retail sector were on full display on Friday as another clothing retailer, Gap Inc. (

GPS, Financial), revised its first-quarter guidance downwards, saying its business was deteriorating worse than expected and sales would be down in the low-to-mid-teens.

Gap shares lost 18% on the news, and despite not reporting any negative news of its own on Friday, American Eagle shares were down 9% in sympathy. It should be noted that American Eagle did predict a sales decline for the first half of fiscal 2022 in its fourth-quarter 2021 earnings report, which was published way back in March 2 and caused a 13% share price tumble. 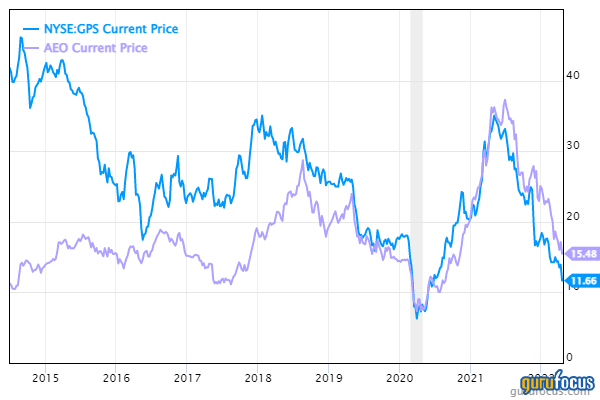 On Friday, April 22, shares of American Eagle traded around $15.45 for a price-earnings ratio of 7.60, far below the industry median of 16.46. The GuruFocus Value chart rates the stock as modestly undervalued. 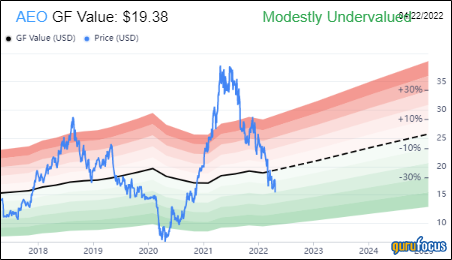 Given American Eagle’s strong retail brand as well as its logistics platform plans and low valuation, the stock appears distinctly cheap at current levels. Shares could suffer more pain in the near future due to the retail sales slowdown and the possibility that the U.S. economy could enter a recession, but the long-term outlook looks bright.