UK Value: After Decent 1st Quarter, Lloyds Banking Has a Lot to Offer

Why David Herro's holding is still worth owning

Normally, higher interest rates would be good for a bank such as Lloyds Banking Group PLC (

LSE:LLOY, Financial) (LYG, Financial), the U.K.’s largest mortgage lender. The British economy has bounced back from the economic consequences of the pandemic and the Bank of England is clearly hawkish.

Yet the stock is down 3% since the start of the year as investors worry about an economic slowdown, a potential rise in bad debts and a weaker housing market. Lloyds shares are trading at a 17% discount to tangible net assets as of the end of last month.

However, first-quarter results, which were recently released, were good. Lloyds increased its guidance for the banking net interest margin this year to at least 2.7% from the 2.6% expected at the end of last year. Management expects the return on tangible equity to be about 1 percentage point higher, too, at 11%.

Higher Bank of England rates will eventually benefit Lloyds because it has a large deposit base, which when the full benefit of a rising Bank of England rate is not being fully passed through to depositors, provides a cheap source of funding for the bank’s lending.

Impairments for bad loans were not too problematic in the first quarter at 177 million pounds ($220.6 million), which while worse than the provisions set aside this time last year, is still below pre-pandemic levels.

As management’s inflation expectations are higher than they were three months ago, the bank has provisioned an extra 100 million pounds for any additional deterioration in repayment levels. No further provisions were made for the historic fraud at its HBOS Reading branch (so far, 790 million pounds have been set aside).

Management also thinks U.K. unemployment will decrease, which, if right, means borrowers should still be able to meet loan repayments despite the higher cost of living. It seems to me that Lloyds’ typically wealthier customer demographic should be better insulated from such pressures.

Lloyds’ high share of the mortgage market means it is more exposed to any potential slowdown in the housing market. While mortgage rates are rising, they are still historically cheap. The issue is more around confidence being sapped in prospective homebuyers by higher living costs. Yet the mortgage market is still very competitive, as banks flush with deposits seek to invest those funds.

The company's own costs are still reasonable, with operational expenses flat and guidance reiterated for a full-year figure of 8.8 billion pounds, including the cash it is throwing behind new products.

One of the reasons I like Lloyds is because of its record of keeping tighter control on costs than peers, with the cost to income ratio in the mid-50s even during last year’s increase in remediation costs and the drop in new lending and interest rates as the pandemic took hold the year before. Compare this with ratios reported by NatWest Group (

This cost discipline and the boost from rising interest rates have benefited cash generation, which is good for the dividend – a key part of Lloyd’s investment case. The dividend is forecast to rise to 2.31 pence per share this year, giving it a yield of 5% at the current share price. That’s good enough for long-term investors like me and

The risks to holding Lloyds is that slowing economic growth could cause the stock to underperform in the short term. But the stock has a high Piotroski F-Score of 8 and is fairly valued based on the GF Value Line. 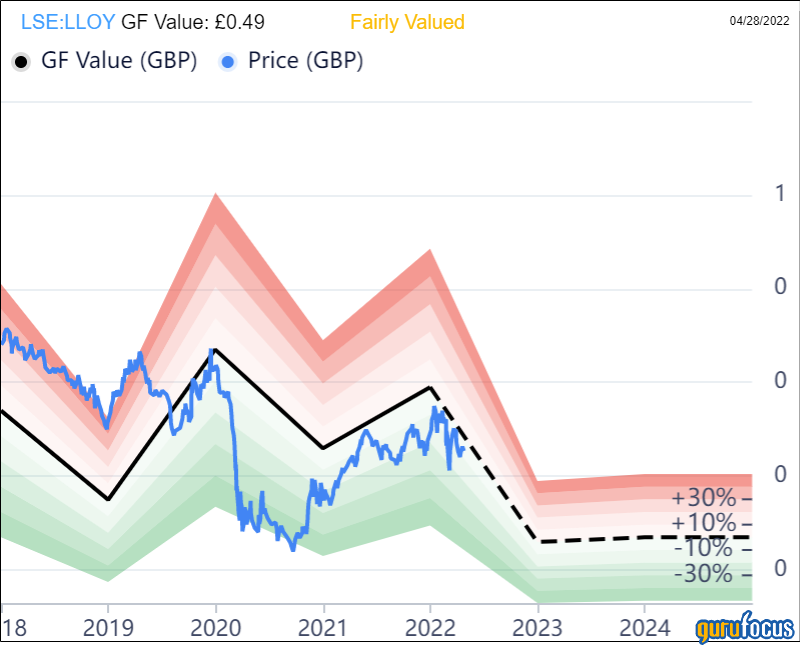