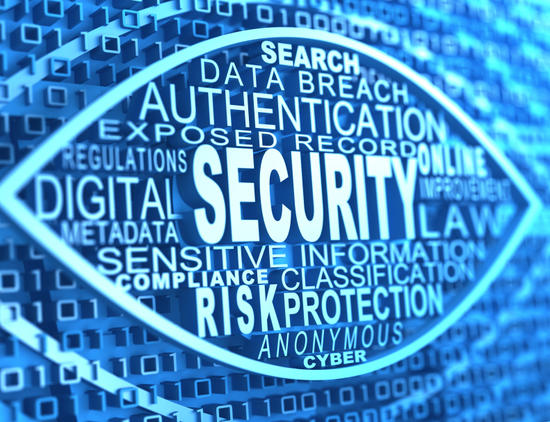 S, Financial) was founded in 2013 but only had its IPO very recently in June 2021. The stock price initially popped up by 55% through the following September, when the lockup of company’s insider shares expired. This acted as a catalyst for the stock to correct down by 24% as insiders cashed out. The share price began to rise again shortly afterwards, but nowadays, the high inflation environment has been putting major pressure on the stock. 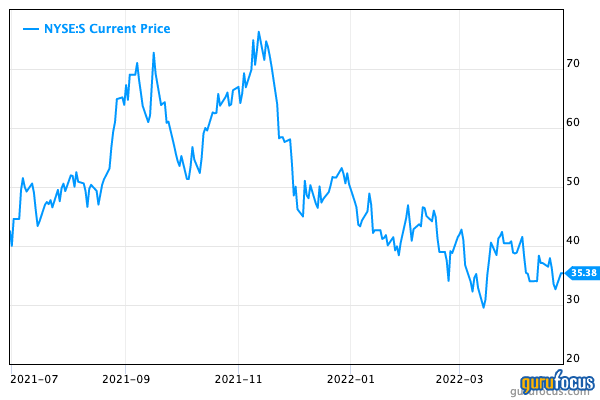 A rising interest rate environment tends to cause a compression in valuation multiples, which affects growth stocks to a greater degree. In my opinion, this is likely the main reason why SentinelOne shares are down, because I see the company as having great long-term prospects. Even as the share price has fallen, the company has posted extremely strong financial results and has many tailwinds in the cybersecurity industry.

SentinelOne is a leading provider of endpoint security software. Endpoints are the “end” devices which we use to connect to a network, such as mobile phones, desktops, laptops, tablets, etc. As these devices are at the end of a network and are often used remotely, they are increasingly vulnerable to cyberattacks. As remote working has increased in popularity, the need to secure endpoint devices is becoming even more vital. In addition, the rise of IoT (Internet of Things) and connected devices also act as a catalyst for industry growth.

According to one study by Fortune Business Insights, the global endpoint security market is projected to grow from $13.99 billion in 2021 to $24.58 billion in 2028 at a significant CAGR of 8.3% in the forecast period.

SentinelOne is poised to ride this growth trend. According to Peerspot, they are ranked number two for endpoint security, and users give the company an average 10 out of 10 rating. Their solution uses Behavioral Artificial Intelligence (AI) to monitor, track and put into context all event data. They turn “data into stories,” and these “stories into context." If the system “spots” an anomaly in the pattern, then it can implement its security to investigate potential hackers. Their system offers detection and response, which makes it particularly appealing to customers. 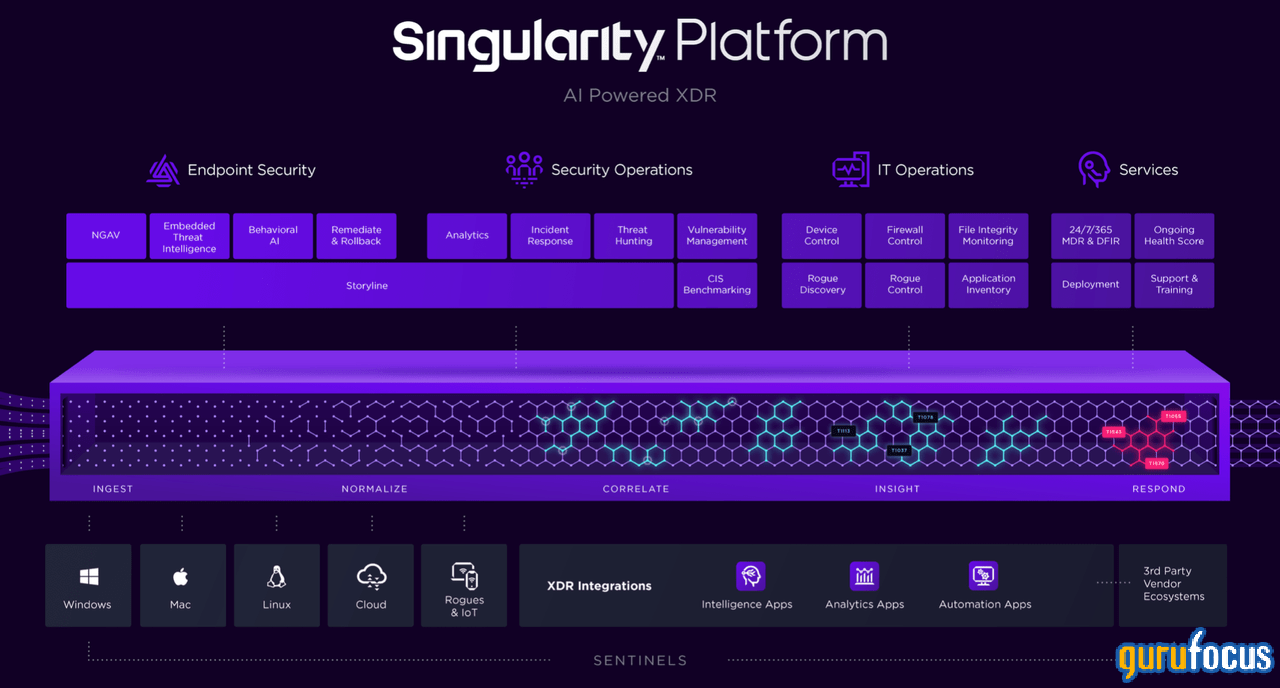 Their system is extremely similar to the number one player according to Peerspot customer ratings, Crowdstrike (

CRWD, Financial), which is their chief competitor. Both SentinelOne and Crowdstrike are recognized by Gartner as leaders in the "Endpoint Protection Magic Quadrant."

Luckily for investors, SentinelOne includes a comparison with Crowdstrike and why they believe they are the superior company. Notice the factors such as being “easier to learn” and offering multiple deployment options such as on premises, hybrid or cloud. 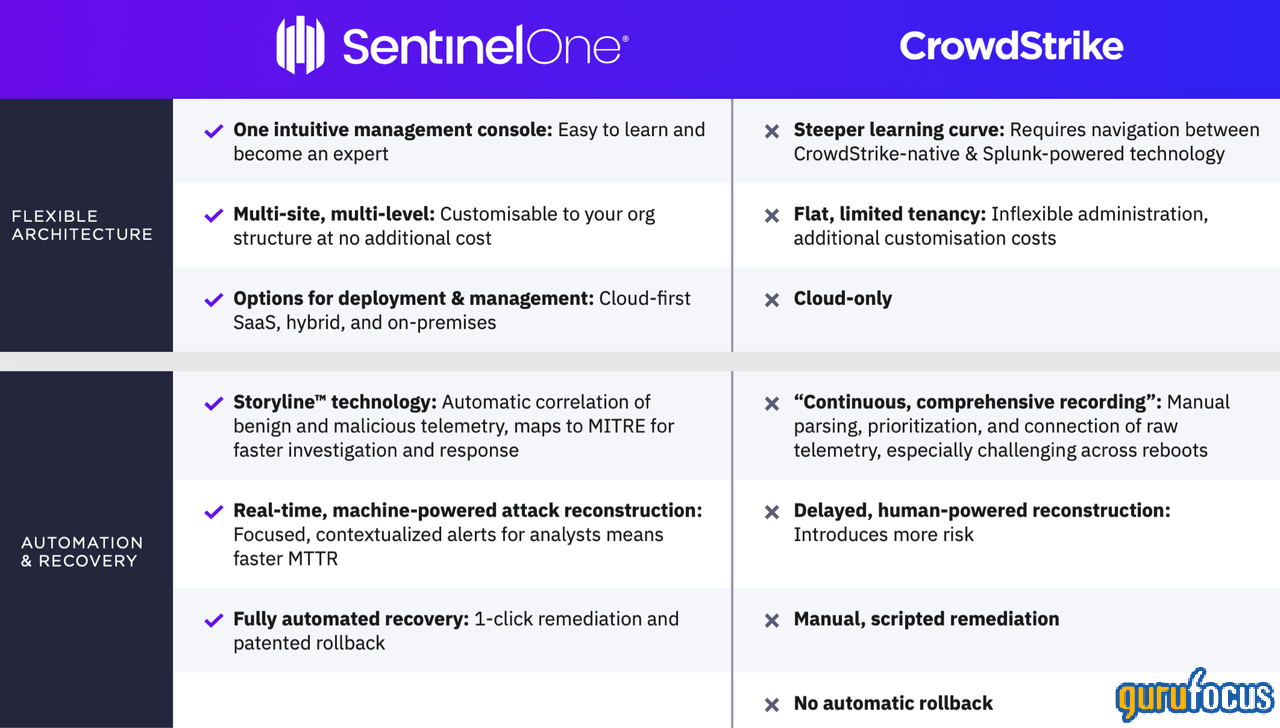 The company states that alternative Endpoint Recovery (EDR) services use the “1-10-60 rule,” which means the best outcome is one minute to detect an attack, 10 minutes to investigate and 60 minutes to respond. However, SentinelOne automatically investigates and responds without the need for manual tactics.

SentinelOne’s customers numbers grew by over 70% year over year in its most recent earnings report, exceeding 6,700 mainly large enterprises and medium sized businesses. They also increased their customers with an Annual Recurring Revenue (ARR) of $100,000 by 137%, which is fantastic.

They operate with a very similar strategy to Crowdstrike which involves a “land and expand” approach of modular sales. This has allowed the net retention rate (NRR) to increase to 129%, which means customers are staying and spending more. 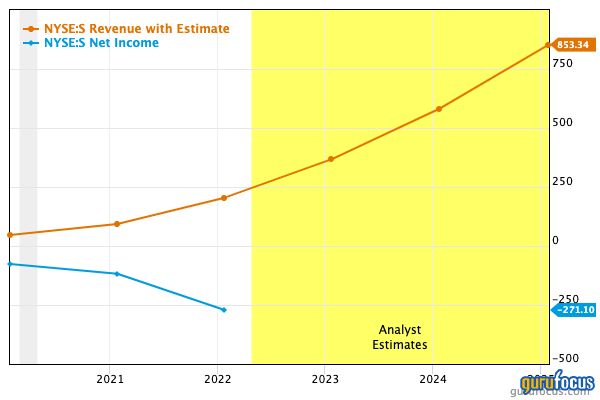 The company is operating at a heavy loss, recording a net loss of $267 million in 2021. However, $136 million of this was due to spending on R&D. In addition, a large portion of cash goes to sales and marketing. Crowdstrike is the larger player with $1.4 billion in revenue vs. SentinelOne's $205 million. In addition, Crowdstrike has a higher gross margin, and although it is also losing money, it has a better operating margin. 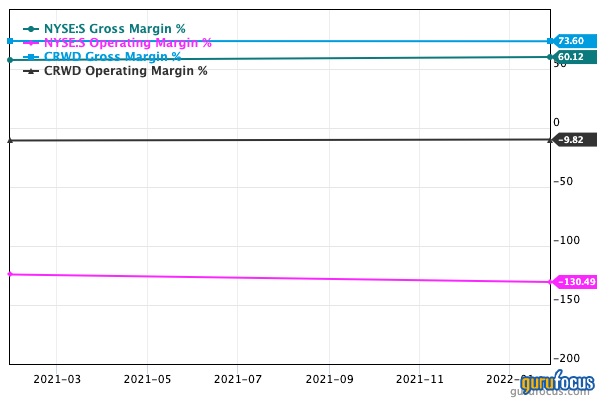 In terms of valuation, SentinelOne has traded at a higher valuation than Crowdstrike in the past, but now their price-sales ratios are starting to converge at 33 for Crowdstrike and 35 for Sentinel One. The slight premium SentinelOne trades at could be due to the higher growth expected by analysts on Wall Street (80% vs. 49% for Crowdstrike). However, Crowdstrike does have stronger free cash flow per share ($1.94 vs. $0.61), which does offset this slightly. 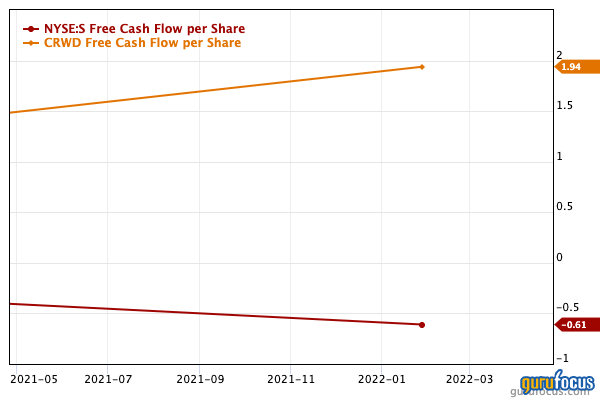 Relatively to historic levels, both stocks are trading “cheaper” but are still not cheap.

Overall, I believe SentinelOne is a fantastic way to play the endpoint cybersecurity market. Their close competitor Crowdstrike seems to have a slight edge in terms of product reviews, sales and margins. However, I believe the growing market is big enough for multiple players.

The valuation has compressed recently due to the rising interest rate environment, but it is still not cheap. There is also the risk that the bullish estimates baked into the stock won't come to fruition. However, this stock is definitely one to watch.