Once heralded as the “golden child,” the Alzheimer’s drug Aduhelm has all but been abandoned by its parent Biogen Inc. (

That the company is banking on the success of an Alzheimer’s drug that works similarly to Adulhelm is unlikely to inspire a great deal of confidence among investors. Biogen and its development partner, Eisai Co. Ltd. (

ESALY, Financial), are planning to submit an application for the treatment lecanemab to the Food and Drug Administration by next month. The application references a mid-stage clinical trial that the companies say showed some positive results, although it didn’t reach its main objective.

Biogen and Eisai also are sponsoring a larger trial aimed at confirming the drug’s benefits, according to an article in BioPharma Dive. Any strategic moves Biogen takes before the phase 3 readout on lecanemab probably won’t be met with much enthusiasm by Wall Street, wrote Brian Skorney, an analyst at Baird.

Aduhelm has been steeped in controversy even before it was approved last June. The death blow was probably the decision by Medicare to limit payment for only patients enrolled in years-long government studies. Seeing the handwriting on the wall, Biogen recently decided to cut commercial support of the treatment to the bare bones, saying it will provide resources only to manage patients across programs, including a continued free program for patients currently being treated in the United States. 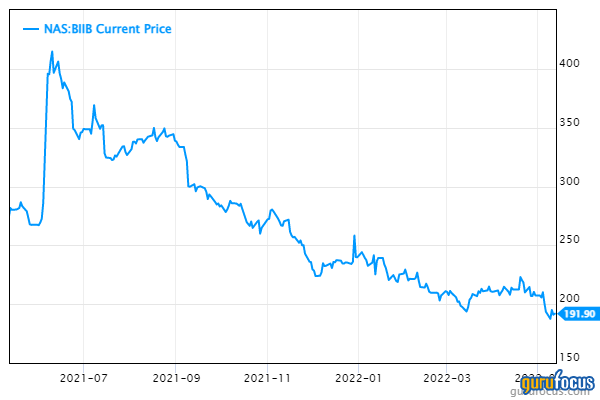 Caption: Biogen shares have been in a tailspin in the past year.

Biogen needs to move fast to stench the bleeding. Since trading as high as $468 upon approval of Adulhem last June, the stock has slid all to way to $192, a decline approaching 60%.

If the company and its shares are to be resurrected, it will come with new leadership at the top. During a quarterly earnings presentation this week, Biogen said it is looking at candidates to replace CEO Michel Vounatsos, who’s owned the job for five years. The company also announced it has two new priorities: making deals and de-risking research.

Analysts at Piper Sandler are skeptical about Biogen’s ability and willingness to do transformational deals given its track record and limited resources. They wrote that owing to the company’s “historic reticence” to pursue deals for more advanced, often pricier drugs, “we frankly struggle to see whether this will form a significant part of a successful ... turnaround.”

And the company hasn’t done well on past deals either, yielding little in the way of promising programs or new products. These disappointments come on top of other efforts to develop treatments for stroke, ALS, Alzheimer’s and Parkinson’s disease, leading to criticism of Biogen’s pipeline and calls for the company to diversify beyond its core area of neuroscience.

Priya Singhal, interim head of research and development, said neuroscience will remain a focus, but that Biogen is “definitely open to adjacencies.” On that front, she noted the company’s work in neuropsychiatry, where it’s co-developing depression therapies with Sage Therapeutics Inc. (

SAGE, Financial) as well as testing a potential medicine for the cognitive impairment associated with schizophrenia.

Biogen also said it’s interested in immunology, pointing to lupus drugs that are in the final stage of human testing. “That’s a specialized immunology field, and we may consider other indications, we may consider other potential opportunities in the space,” Singhal said. “So that’s one way in which we would diversify and rebalance our risk.”