This company is backed by Fisher Asset Management

AYX, Financial) is a data analytics software company which aims to democratize analytics for all. Unlike many other disruptive companies, they are a bit older, having been founded way back in 1997. Their IPO was in 2017. Since then, the stock price has been very volatile, with a major bull run in 2020 taking the stock price to highs of $178 per share. 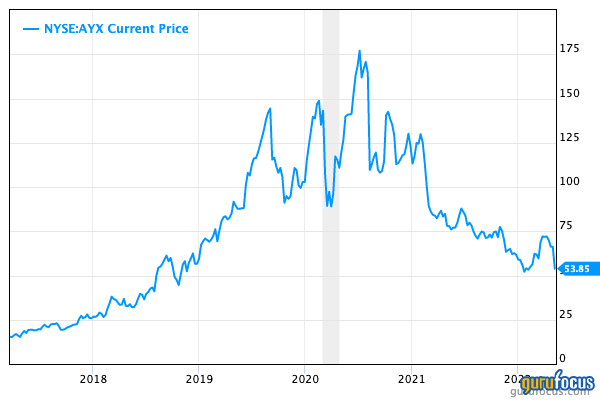 Since then, the stock price has slid down by 69%. Personally, I don't think this selloff is justified; I believe it is mainly due to the macroeconomic pressures of high inflation and fears of rising interest rates. The stock now trades at ~$53 per share, and in the first quarter of 2022,

Ken Fisher (Trades, Portfolio) of Fisher Asset Management was buying shares. During the quarter, the stock traded for an average price of $58. Let’s dive into why I believe the company could be undervalued right now.

Alteryx is a data analytics software company which helps companies turn “ideas into outcomes.” Their cloud-based platform offers “end to end” analytics for everyone. This allows people without coding knowledge to analyze data and handle the most time-consuming part of any data analytics project, which is the “data preparation” stage.

The platform enables users to extract, transform and load (ETL) from a multitude of databases to one single place. Companies have a huge problem today with data silos, and thus a platform such as Alteryx can help to solve this. In many data analytics projects, a multitude of softwares have to be used, such as Excel and multiple SQL databases, but Alteryx's unified platform aims to simplify this process.

The platform's user interface allows workflows to be built easily without the need for complex code. The ultimate goal is to help companies to leverage their data, automate processes and make data-driven decisions.

Alteryx estimates the total addressable market for its services is a huge $65 billion and is growing substantially. As somebody who has done data analysis in the past, I tend to “clean” the data in Excel and then SQl before connecting it to a visualization software like Tableau (which is owned by Salesforce (

CRM, Financial)). Tableau is a fantastic and easy to use software, so its nice to see they are partners with Alteryx and enable integration.

The company has been on an acquisition spree in recent years, adding Hyper Anna, Lore IO and Trifacta to its tool belt. 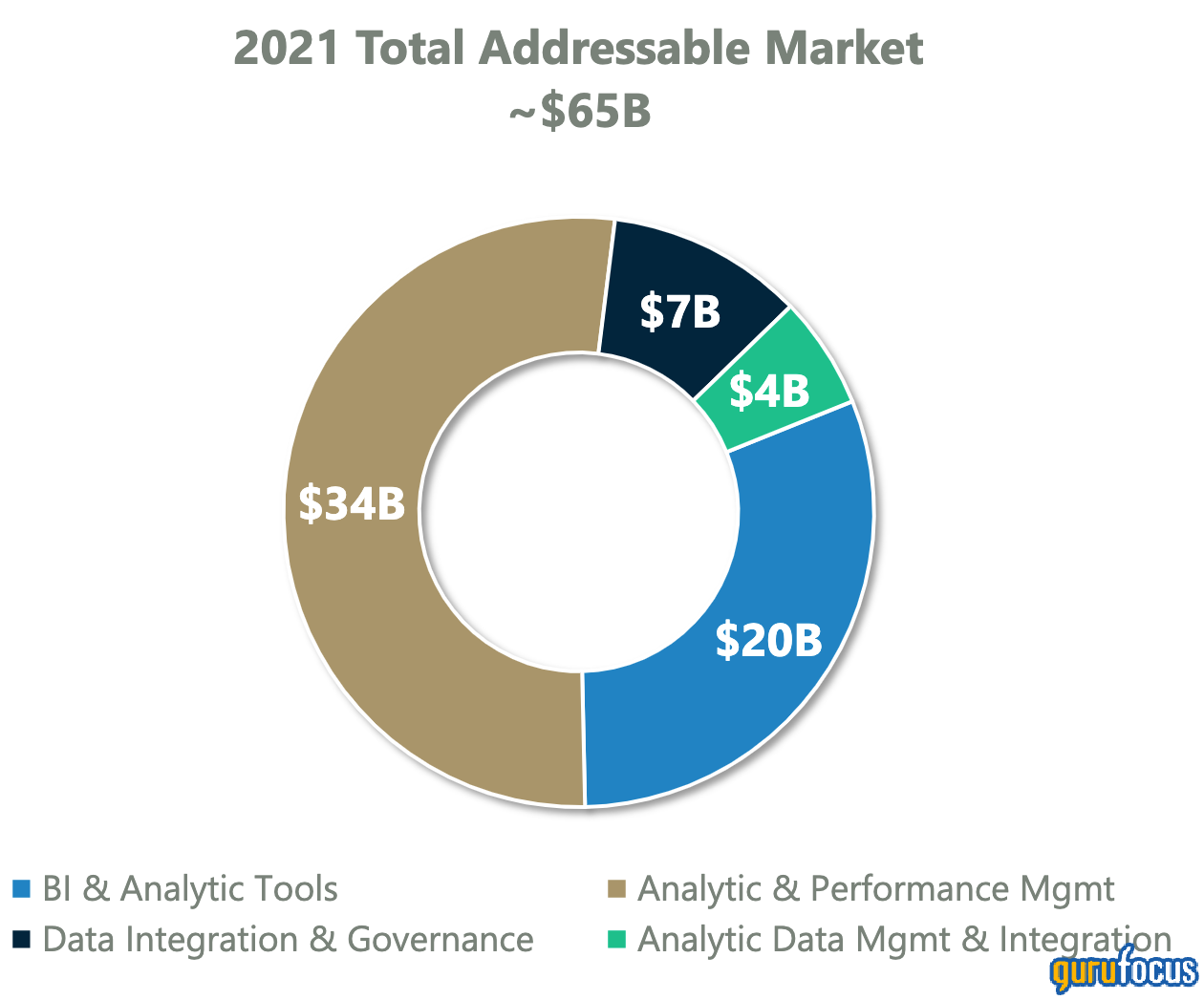 Alteryx generated revenue of $536 million in full fiscal 2021, an increase of 8% from $495 million in 2020. In the first quarter of 2022, revenue has accelerated 30% compared to the same quarter last year, which could be a positive sign of things to come. 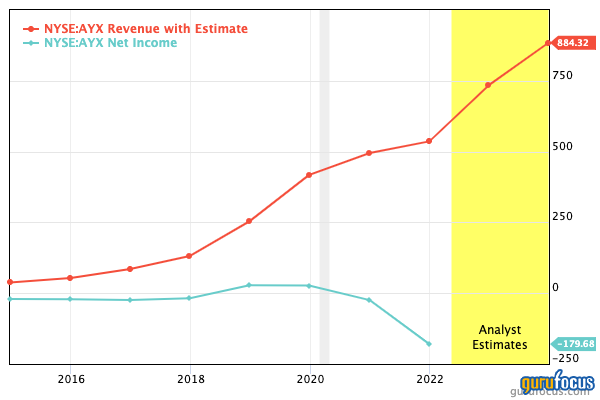 The company’s gross margin is extremely high at 89%, though they are currently running at a -19% operating margin. This is mainly due to the large research and development expenses equating to $132 million as well as SG&A expenses of $484 million for fiscal 2021. 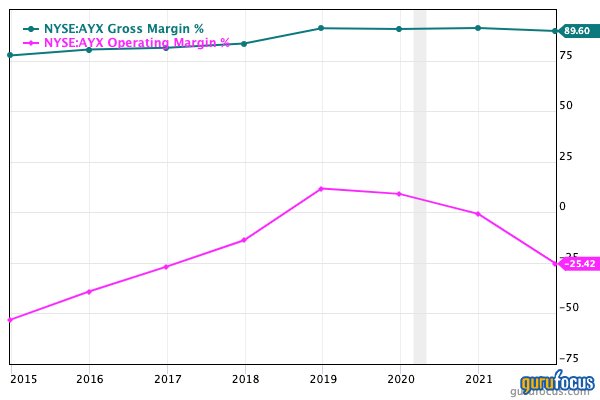 Free cash flow came in at $30 million for fiscal 2021, which was lower than the $48 million in 2020, but higher than two years ago, which brought a free cash flow loss of $22 million. Alteryx has a high 119% dollar based net retention rate, which is a sign customers are staying with the product and spending more.

Their balance sheet has $659 million in cash and short term investments with minimal current debt of $77 million. However, their long term debt is fairly high at $686 million, though this is not unmanageable currently.

In terms of valuation, the stock is currently trading at a price-sales ratio of 6.3, which is the lowest it’s ever traded historically. This is about as cheap as Salesforce, even though Salesforce is a much more well-established company. 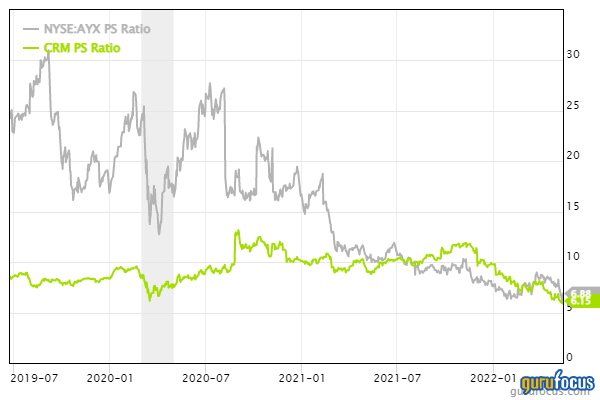 The GF Value Line indicates the stock is undervalued, but also a “possible value trap." This is perhaps due to the large increase in operating losses. However, this can be attributed to the larger R&D and SG&A investments. 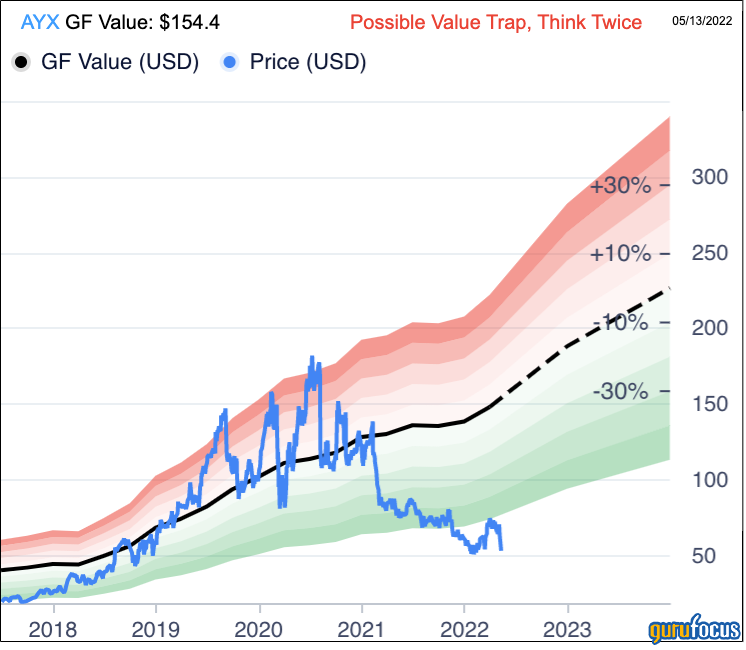 Overall, I think Alteryx is poised to disrupt old-school Excel processes by enabling companies to analyze data more easily. Fisher Asset Management seems bullish on the stock, having purchased shares in the first quarter, which increases my confidence in the company's long-term potential. In addition, their high retention and strong customer base is envious.