The company's growth is most likely priced in already

AMD, Financial) is one of the most widely-traded stocks on the market, with an average three-month daily trading volume of more than 108 million shares. Thus, Advanced Micro Devices provides plenty of sharp action to investors. However, I have reason to believe that Advanced Micro Devices stock is in neutral territory, and most of its recent progress is priced in, despite surging activity in the CPU and GPU spaces during the past two years.

Advanced Micro Devices produces competitively priced CPUs and GPUs. The application of CPUs has grown in recent times with the popularity of artificial neural networks. CPUs are popular instruments for time-series networks, while GPUs are popular for image recognition.

Furthermore, Advanced Micro Devices is making significant strides in the market with competitive pricing and execution. According to Bank of America (

BAC, Financial) analyst Vivek Arya, the company's PC value share has increased to 20%, while its unit share has surged to 22%.

Advanced Micro Devices recently beat its first-quarter earnings target by 5 cents per share while also strolling past its revenue estimate by $313.7 million. Behind Advanced Micro Devices' successful quarter was a 33% year-over-year increase in Ryzen and Radeon processor sales. Additionally, the company has managed to take advantage of higher-end GPU sales to dodge some of its supply-chain issues, which has caused a trade-off with margin pressure. 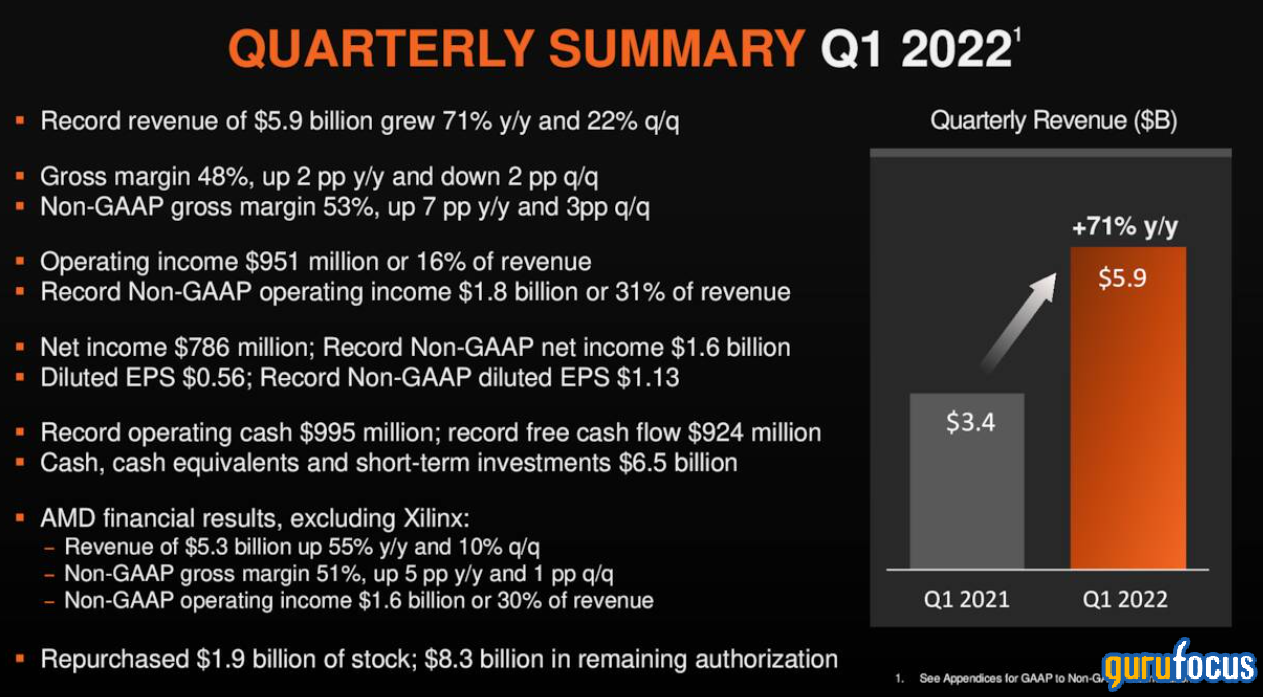 A few matters to worry about

Although Advanced Micro Devices has performed well ex-post, it's still debatable whether its current financial performance can be sustained.

My argument here is based on both macroeconomic and idiosyncratic factors. First off, China's measures to combat Covid-19 have added to supply chain woes, subsequently adding to push inflation. For example, polysilicon prices are still well above historical levels, and the semiconductor "days to delivery" ratio remains elevated at 26.6 days.

Furthermore, Advanced Micro Devices is behind the eight ball regarding quantitative metrics. The company's return on invested capital has decreased immensely during the past quarter, indicating that its competitive advantage might be eroding.

Also, Advanced Micro Devices' price multiples suggest that the stock is overvalued compared to historic levels, which isn't encouraging to see when coupled with a lower ROIC and a lower quarterly gross profit margin.

Finally, Advanced Micro Devices might struggle with a deteriorating consumer base. Enterprises and gaming consumers are faced with significant inflation, which could lead to a dip in the marginal utility cycle, thus pressuring the technology space into a cyclical downturn.

Advanced Micro Devices is a great company. However, stock price discovery doesn't just stop at that. The stock is in balance and most likely in neutral territory, given the status of the company's key metrics and its industry positioning.