2 Stocks Primed for a Short Squeeze

These stocks have high short interest but positive signals 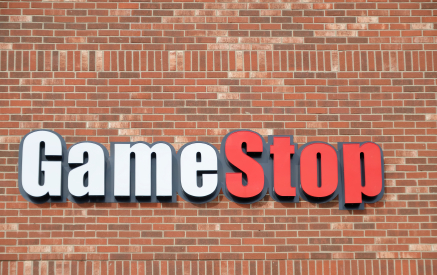 Short selling is a part of the stock market environment that often goes overlooked by everyday investors. Some investors believe a stock may be undervalued, and thus they buy shares, but short sellers bet against a stock because they believe it to be overvalued. This could be due to market exuberance, or just declining fundamentals which haven’t fully been priced in.

The beauty of short selling is that an investor can make money in both the uptrends of the market and on the downtrends. Some investors use this to generate huge profits, while others use short selling as a “hedge” against market volatility. On the flip side, though, short selling can carry more risk.

How does short selling work?

For those who are not familiar with the concept, short selling occurs when an investor borrows a stock in order to sell it on the open market, with the plan to buy it back later for less money after the stock declines. This difference in price is the short seller's profit.

For example, if a stock is trading at $100 a share, you could borrow 50 shares and sell them for $5,000. You have to eventually buy back the shares to return them to whoever you borrowed them from, so afterwards, if the stock declines to $50 per share, you can then buy the shares back for a cheaper price. In this example, you would make $2,500, not including any borrowing fees.

The risk/reward profile is very different when going “short” as opposed to going “long.” When you buy a stock traditionally, your downside is limited to what you paid (100%). However, as stocks have the potential to increase in price infinitely, the amount you might have to pay to replace the borrowed shares is theoretically limitless. Stop orders can help to mitigate this.

Margin calls occur when the amount of equity in your account falls below a certain threshold (usually 30% of the value of the investment). If you don’t add more funds or sell the stock, the broker could do this for you in order to protect themselves from your downside risk.

What is a short squeeze?

A short squeeze occurs when a heavily shorted stock starts to rise sharply in price. As the stock rises, the short sellers must buy shares to “cover” their short positions. This causes a further price rise and the cycle repeats.

While short squeezes can be incredibly lucrative for lucky long investors, stocks are usually shorted for a reason, and thus, betting on a short squeeze is extremely risky and speculative, which investors should always keep in mind.

With that being said, let's take a look at two stocks which are highly shorted but have some positive signals and thus could be candidates for a short squeeze.

GME, Financial) is the most famous “short squeeze” stock after the stock price ran up from just $4 in 2020 to over $325 by 2021, up an eye-watering 8,000%. This was a targeted short squeeze; investors noticed at that time that more were shorting the stock than buying it on the open market and realized that intense buying could trigger an incredible short squeeze.

But of course, trees don’t grow to the sky, and the stock crashed by 87% shortly after. However, it did start to rise again and has had a volatile year. The stock now trades at $91 per share, which is still substantially above their $4 per share price in 2020. 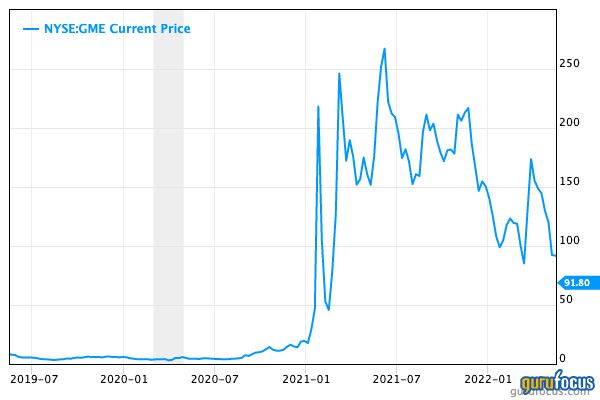 I believe this stock could be a prime candidate for another short squeeze becasuse the company is transforming itself. GameStop is the world's largest gaming retailer, but its brick and mortar stores have been decimated by the rise of e-commerce and online game downloads. The company is generating around $5.4 billion in revenue and $1.3 billion in gross profit on an annualized basis, but they have an operating loss of $361 million.

Short sellers believe the stock is poised to crash further, and thus it has a high 66.41% short interest. However, some investors were also buying the stock recently, such as 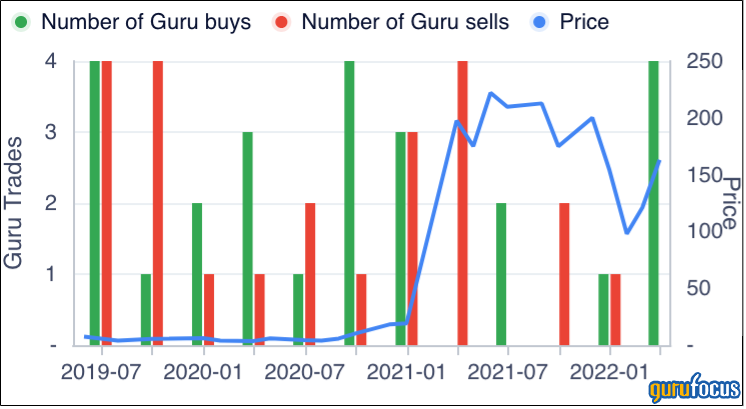 The company’s fourth-quarter 2021 earnings report showed sales increased to $2.25 billion compared to $2.12 billion in the prior year. Within that, their software sales showed great expansion, up 7.4% year over year. GameStop’s collectibles segment showed a 22.4% pop in revenue, and hardware sales were up 2.2%

GameStop is planning to launch an NFT marketplace and has partnered with Immutable X to create a $100 million fund of IMX tokens. GameStop could receive up to $150 million more in tokens in the future by its estimates.

Before you get too excited, be aware the stock is “significantly overvalued” according to the GF Value chart. Thus, extreme caution must be exercised. Based on historical results, the stock is indeed incredibly overvalued. In my eyes, the stock is still speculative and could go in either direction based on whether the company succeeds with new endeavors. 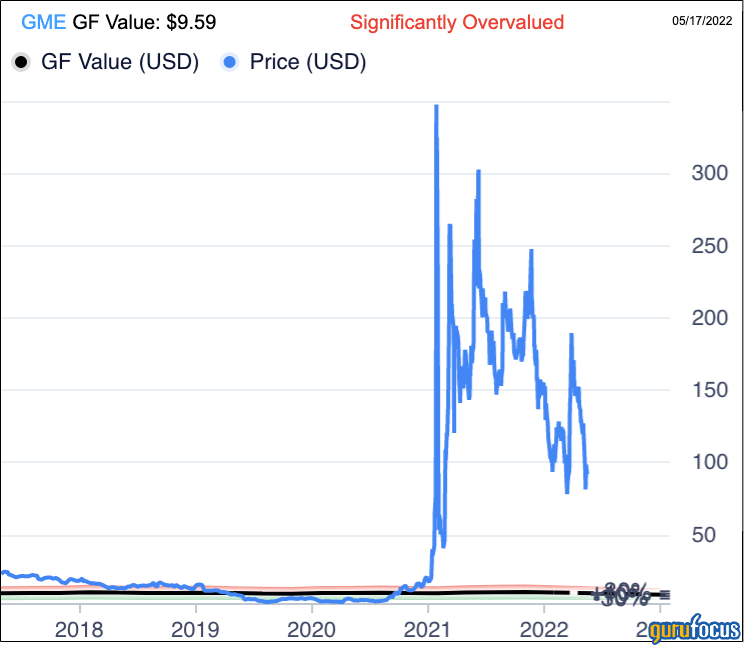 MAC, Financial) is a real estate investment trust (REIT) which specializes in commercial property. They own and operate retail units inside leading U.S. malls and own 48 million square feet of real estate, which is mostly in 44 regional town centers. Their top 10 tenants include major companies such as Best Buy (BBY, Financial), H&M and Foot Locker (FL, Financial). The majority of their tenants are publicly traded and only a few are at obvious risk of not making rent.

The stock price fell off a cliff in 2020, dropping by 77% thanks to the pandemic and closure of “brick and mortar” retail. The stock price has recovered slightly, increasing by 153% to trade at ~$12 per share today. However, this is still well below the share price of $23 in February 2020. 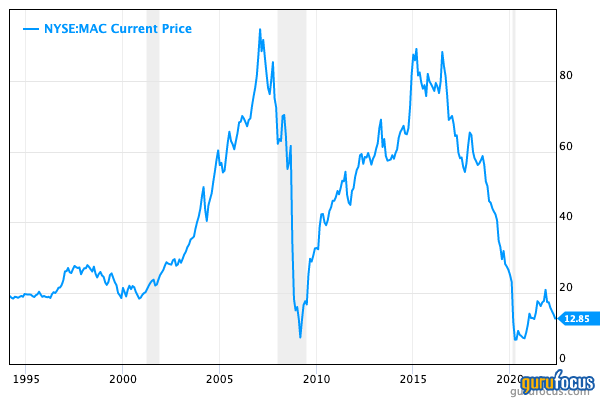 The pandemic accelerated the trend of e-commerce and moved away from brick and mortar retail. According to Stastia, e-commerce accounted for ~19.6% of all retail sales worldwide in 2021. Forecasts indicate that by 2025, online shopping could make up close to a quarter of total global retail sales.

Moving forward, Macerich's future is really the future of malls. I personally believe commercial real estate is still overpriced. It will still exist in the future, but as more of an “experience” space as opposed to purely for shopping. Macerich seems to be aligned with my thoughts and has recently been leasing units to a variety of different tenants which cover everything from golf lounges to eateries and even co-working spaces. For example, in the fourth quarter of 2021, they announced a 584,000 square foot, three-level creative office space for Alphabet's Google (

A way to analyze the value of commercial real estate is to look at how much rents can be raised. If we look at Macerich’s average base rent, it has been on a positive trend (which is good), but it has only been increasing by less than 2% since 2018, while monthly traffic is at 95% of the level it was in 2019, which isn’t too bad considering the major changes in lifestyle.

The good news is, the company did produce strong funds from operations of $0.53 per share, which beat analyst estimates by $0.05 for the fourth quarter of fiscal 2021. 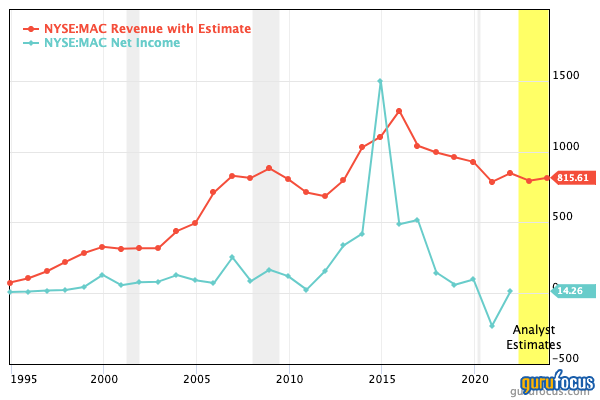 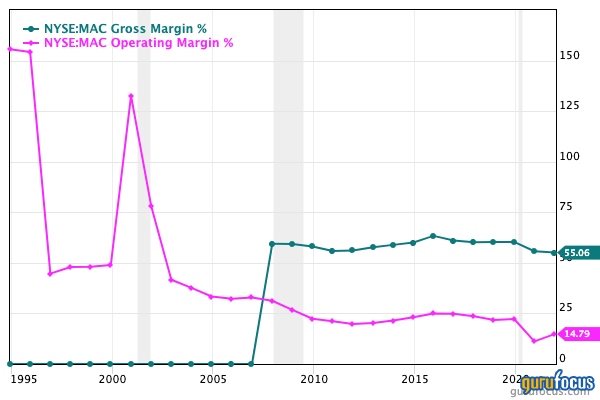 They also reduced their debt by $1.7 billion, or 20%, which was great to see. Moving forward, they expect $235 million of free cash flow after dividends and recurring capex in 2022 and have a long range goal of 7% to 7.5% net debt to forward Ebitda.

Thus, despite the high short interest, management seems to have a smart plan in place, and thus this stock could be a candidate for a short squeeze in my view.

Short sellers tend to short stocks because they believe they are overvalued or the fundamentals are declining. A short squeeze can sometimes occur when the short sellers are wrong (at least in the short term) and a stock starts to rise sharply in price, after which these short sellers will have to buy shares to cover their positions. Now, investing into a stock because of an expected short squeeze is very speculative and is basically akin to gambling rather than investing, but it is still a strategy that some people utilize.