The company offers a 6.6% dividend yield with little of the risk associated with high-yielding stocks 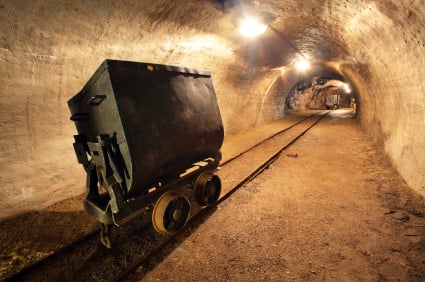 There are at least a couple of ways to get a higher-than-average dividend yield. One is to buy a risky stock—and cross all your fingers.

Another is to buy a company that’s selling at a bargain price. This is the case for Southern Copper Corp. (

SCCO, Financial), which boasts a yield of 6.6%. Additionally, its fundamentals are robust enough to generate a GF Score of 94 out of 100: 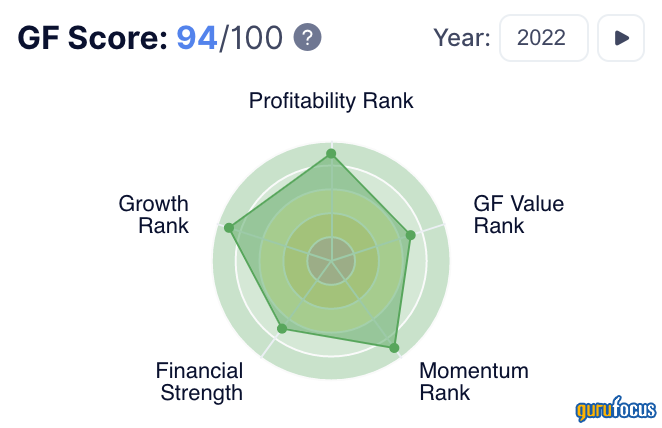 The company is one of largest integrated copper producers in the world. It mines, smelts and refines copper, molybdenum, zinc and silver in Peru and Mexico, as well as exploring in Argentina, Chile and Ecuador.

Based in Phoenix, it believes it has the largest copper reserves in the world. The company was first incorporated in Delaware in 1952 and has been listed on the New York and Lima Stock Exchanges since 1966.

Today, it is a subsidiary of Grupo Mexico (

GMBXF, Financial) and Americas Mining Corp. and, in turn, has subsidiaries of its own, as detailed in this chart from its first-quarter 2022 investor presentation: 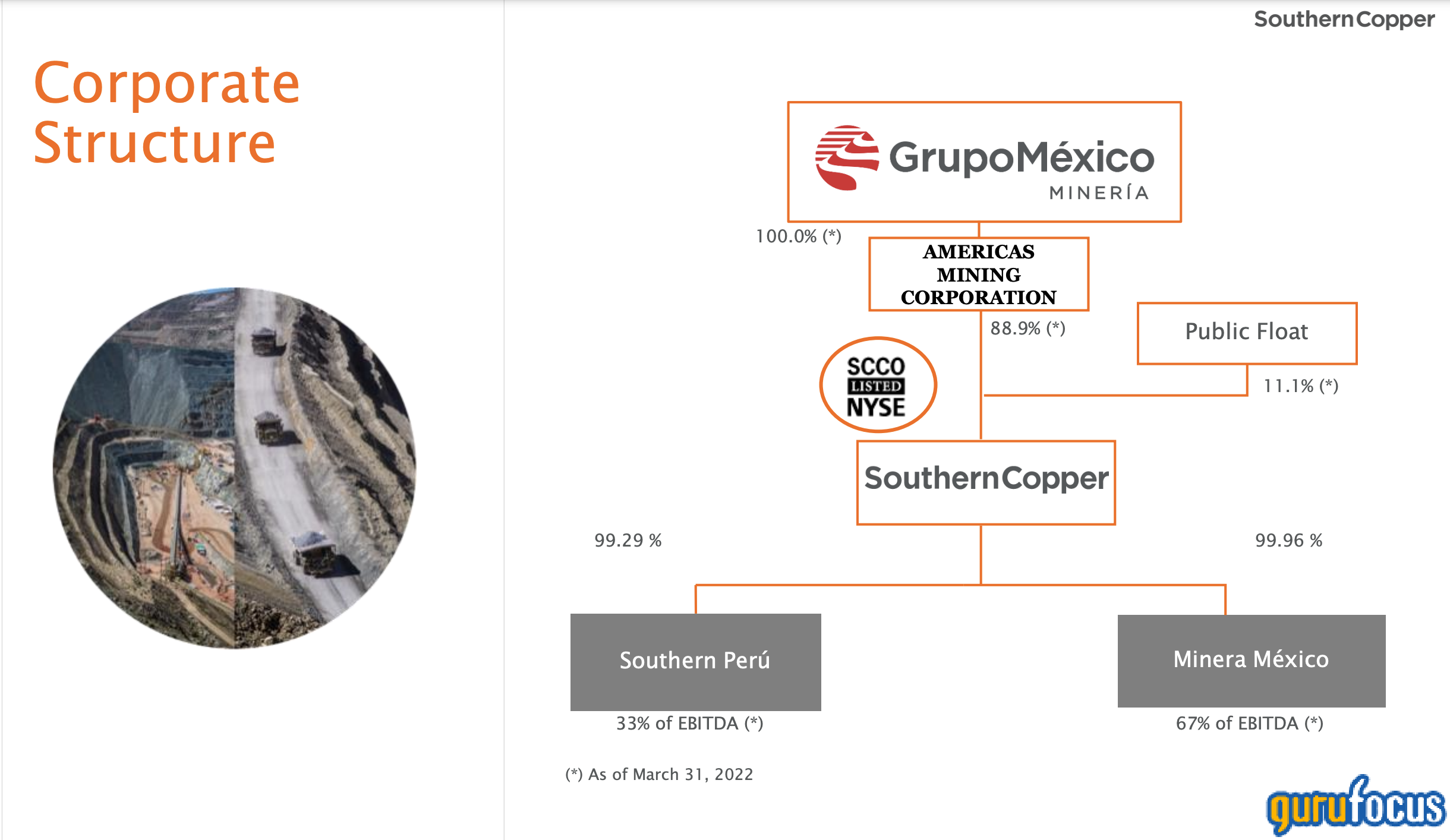 Copper, and the other metals it produces, are commodities, so the company has little influence over the prices it receives. Recognizing that, it focuses on cost efficiency and growth: 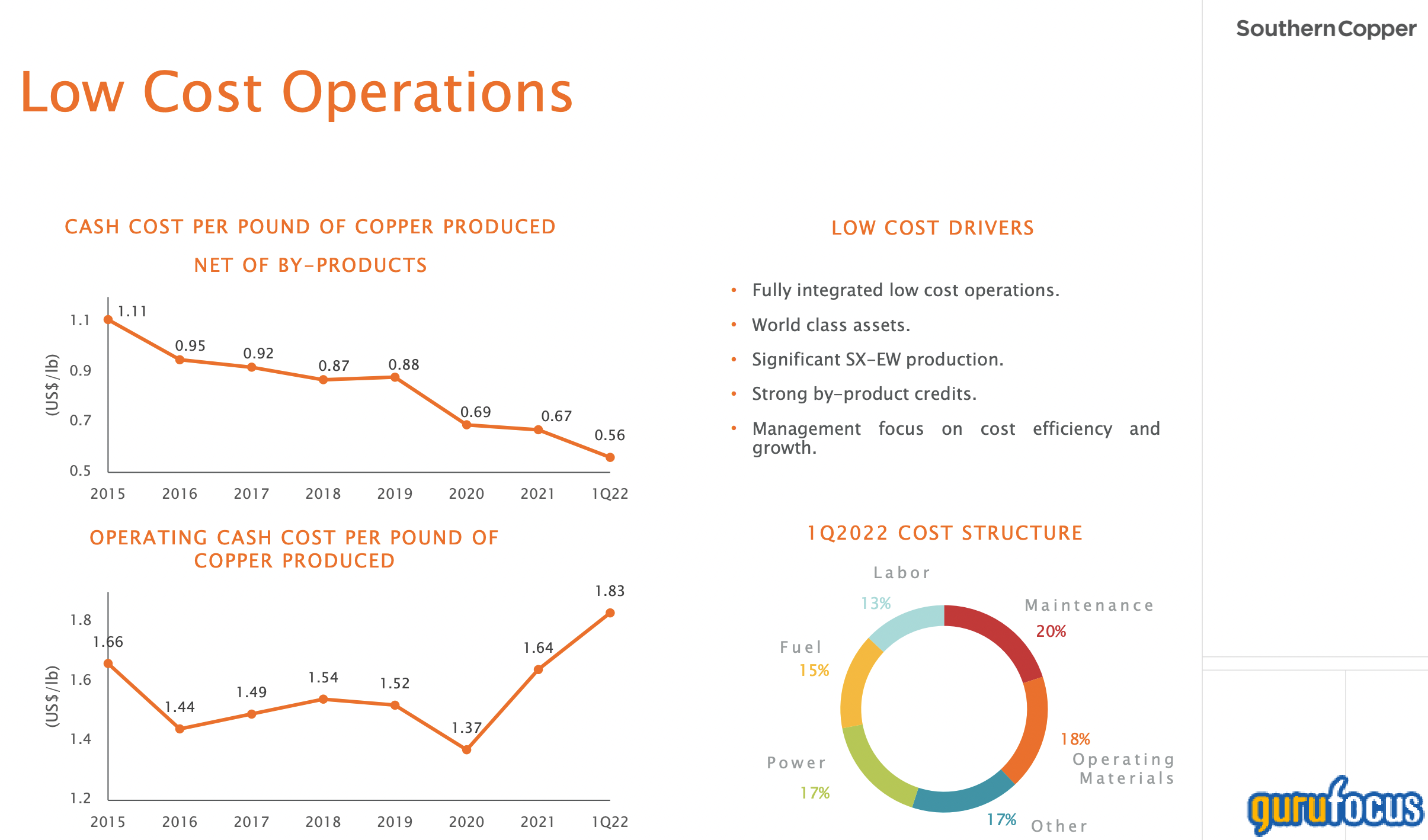 The following chart summarizes its income and balance sheets: 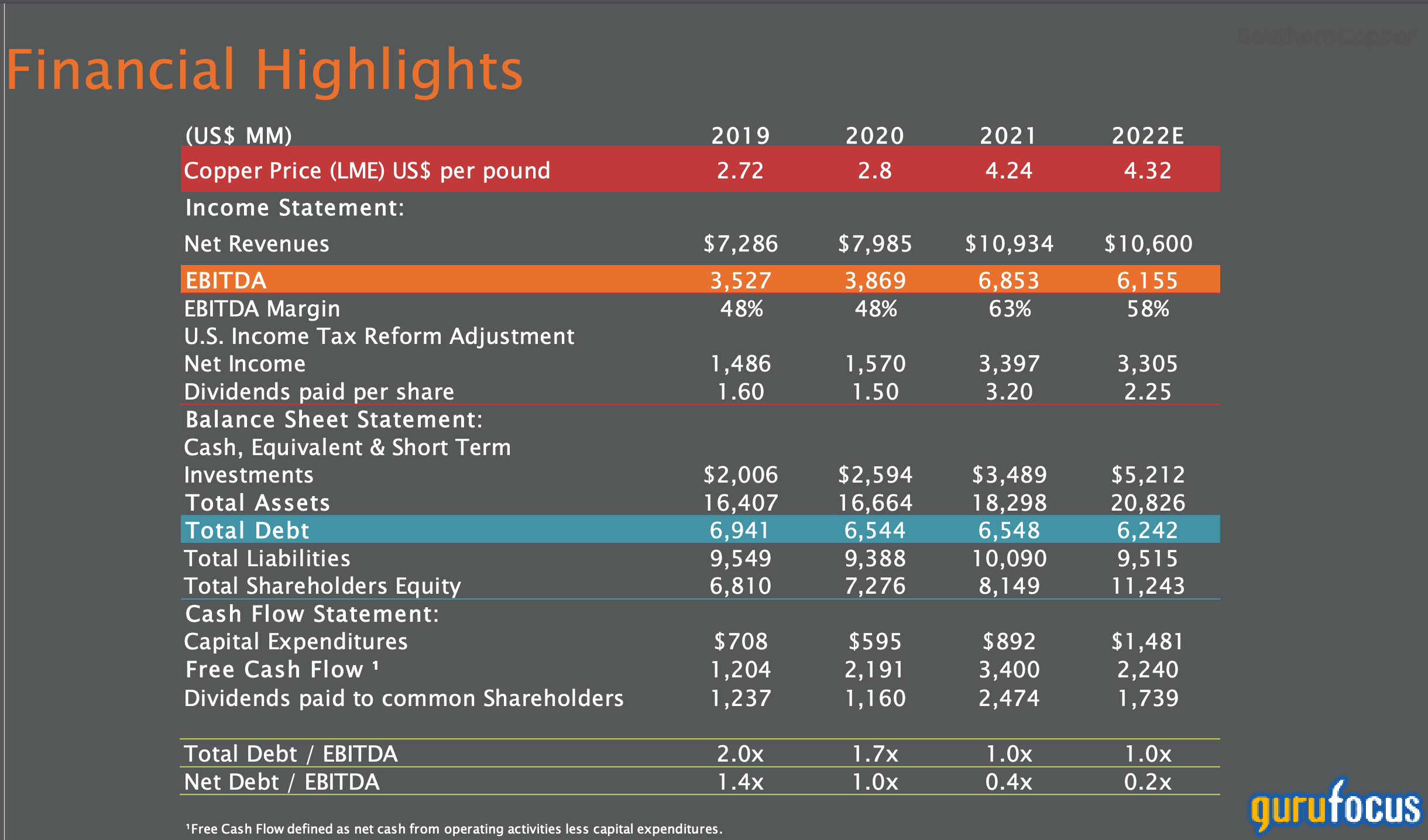 Other major producers of copper include Codelco, Glencore ( 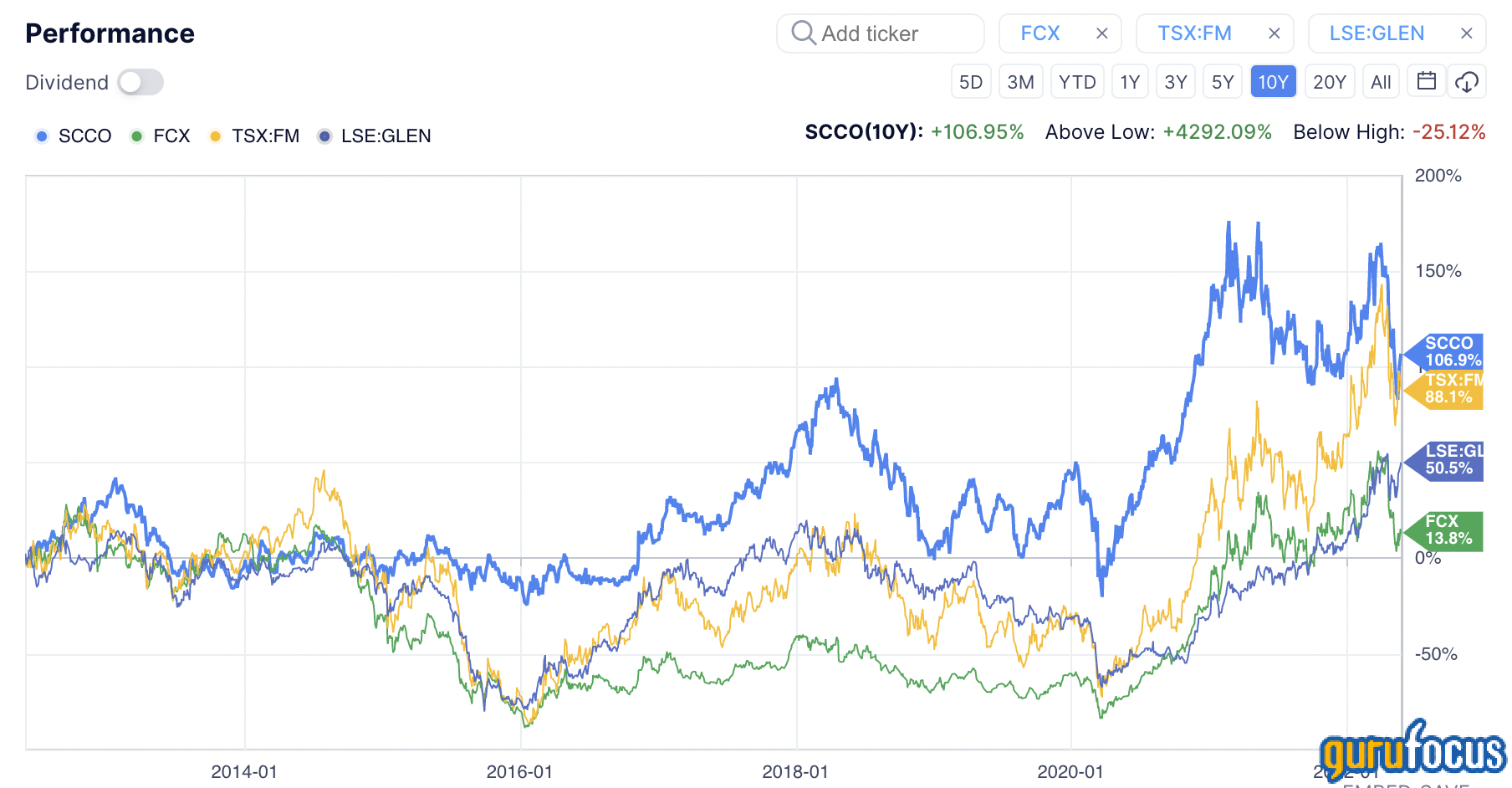 In its 10-K for 2021, the company noted that competition in the copper market is driven mainly by price and service, with price being more important when supplies are "ample." It also observed that copper competes with other materials such as aluminum and plastics. 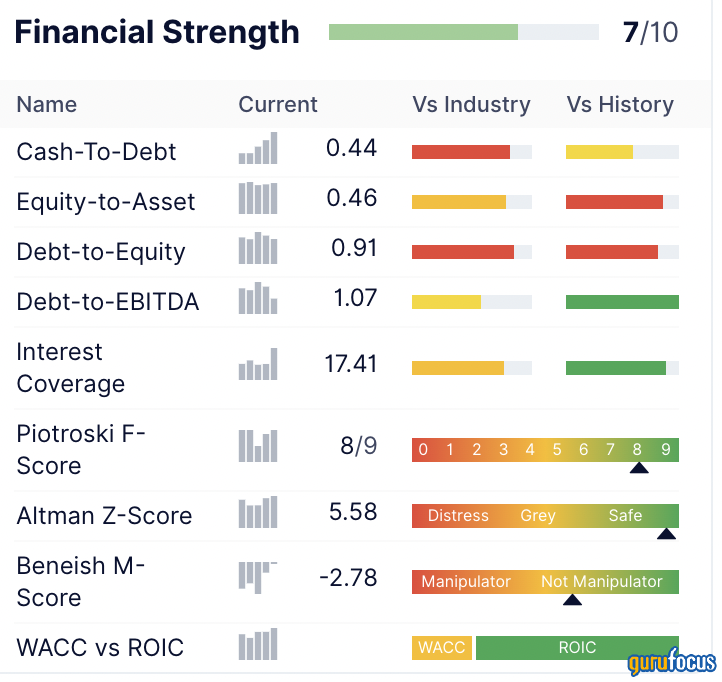 Financial strength is one of the weaker metrics, mainly because of its debt: 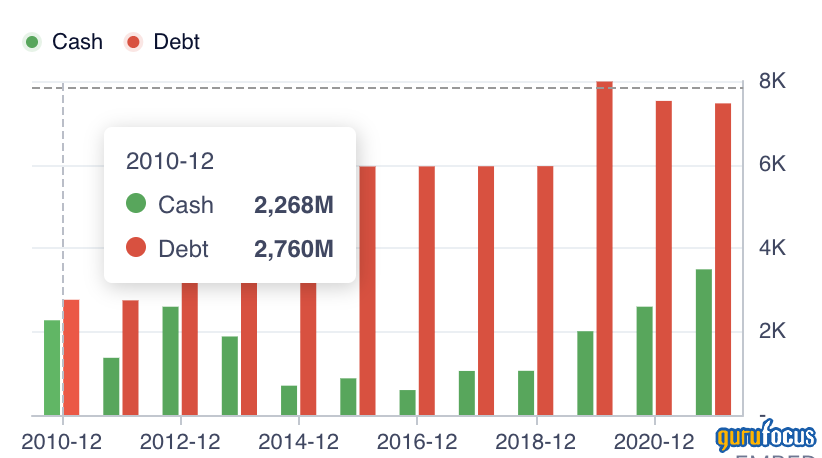 Still, the interest coverage ratio shows the company has ample operating income to cover its interest expenses. It also has used its borrowed funds quite effectively. As we see at the bottom of the table, its weighted average cost of capital is 8.62%, significantly less than the return on invested capital of 27.52%.

This, along with a high Piotroski F-Score, indicates the company manages its finances well. 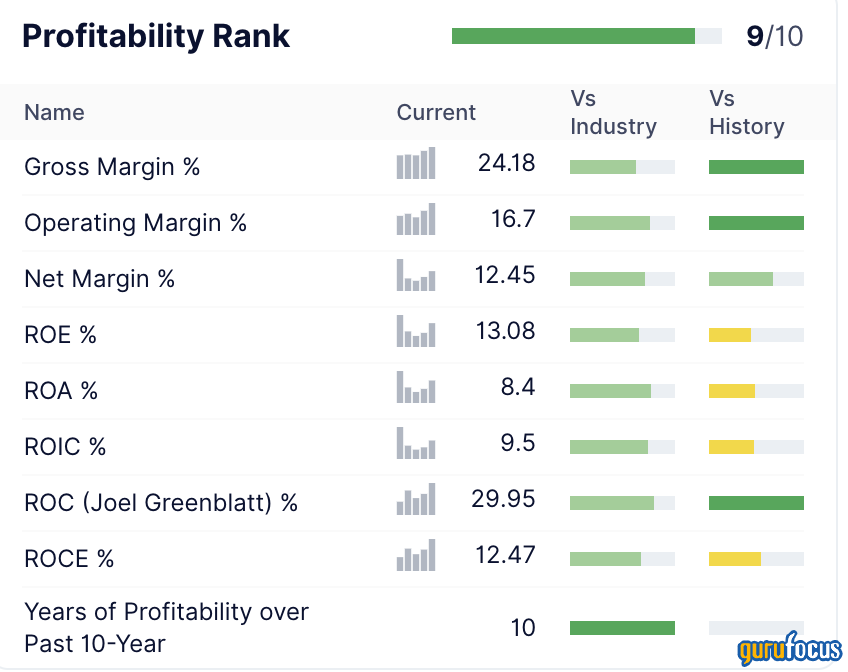 We seldom see a profitability table with that much green and, in particular, dark green.

Looking to the growth table (not shown here), there are robust numbers for revenue growth (an average of 15.5% per year over the past three years), Ebitda (24.7%) and earnings per share without non-reoccurring items (30%). The company is making good on its commitment to manage the financial issues within its own control.

As mentioned earlier, Southern Copper pays a high dividend. Many would argue it is a very high dividend, high enough to make investors wary.

Companies sometimes pay high dividends because internal or external conditions that weaken their business cases, forcing down the share price. This is a chart of a company in a cyclical industry, also caught up in the broader market decline: 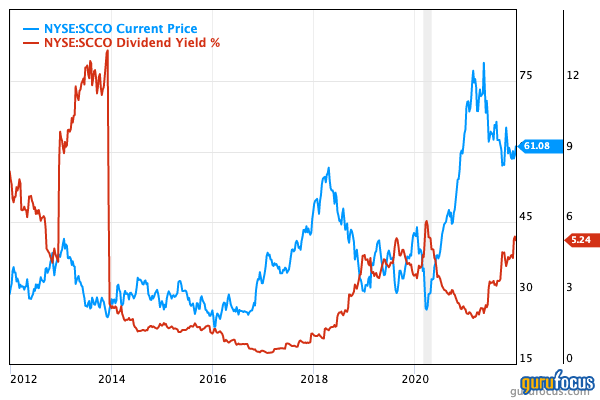 The dividend payout ratio is high at 81%, limiting how much more growth is possible after the fast growth of the past few years.

Still, with its strong free cash flow, the company may have funds for even higher dividend per share payments: 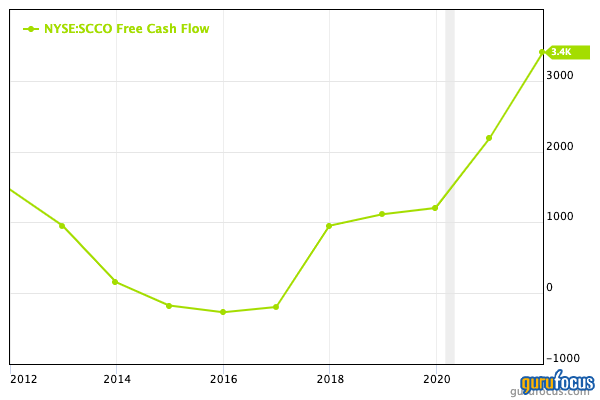 This three-year chart shows how the share price has bounced up and down since Feb. 22, 2021: 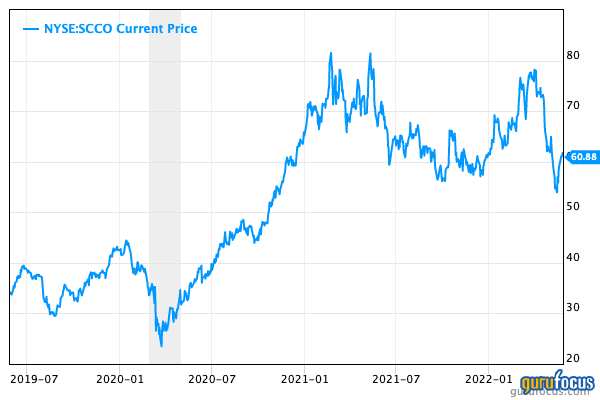 At the close of trading on Friday, May 27, Southern Copper had a value ranking of 7 out of 10. More specifically, it had a price-earnings ratio of 13.97 and a PEG ratio of 0.72. With a PEG at that level, the stock would be undervalued.

The GF Value Line concludes the stock is fairly valued: 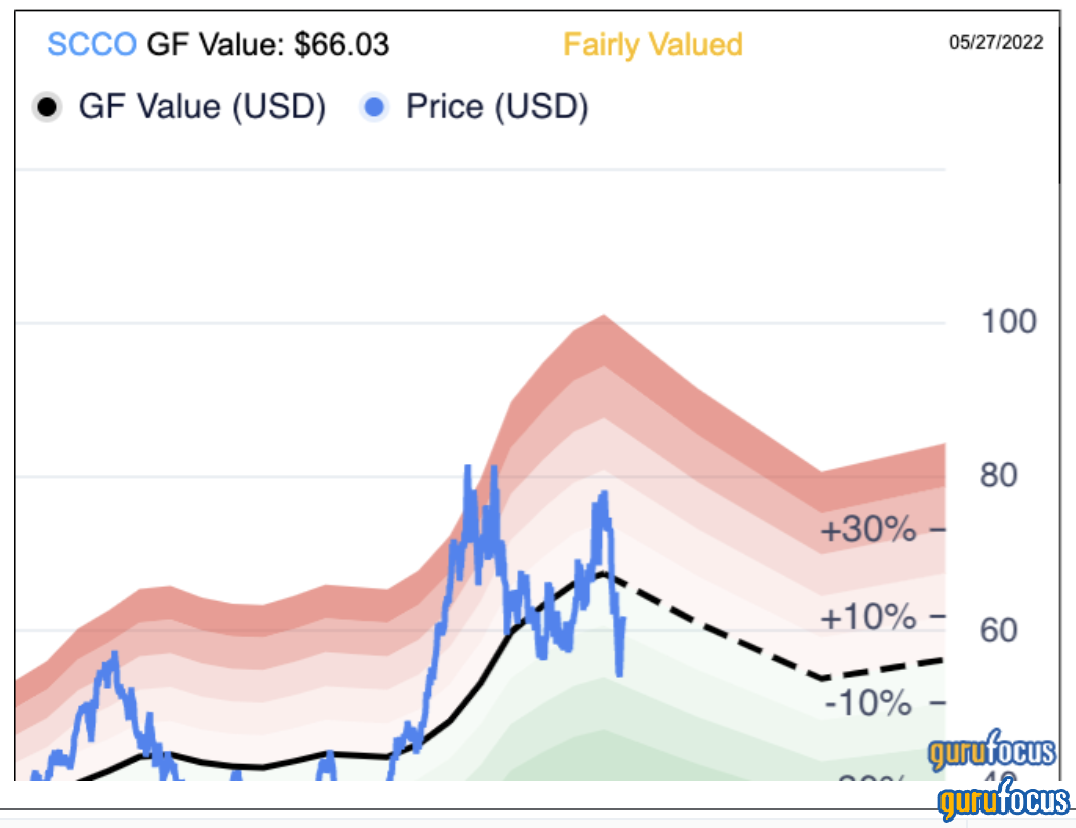 With a predictability rating of only one out of five, we will not look to the discounted cash flow calculator for any additional insight.

Five of the gurus held Southern Copper positions at the end of the first quarter:

Normally, we associate high dividend yields with companies in some kind of trouble. Because of that trouble, their share prices drop dramatically, pushing the dividend yield up.

But that’s not the case with Southern Copper. With a GF Score of 94 out of 100, it has one of the best fundamental bases in the market. Financial strength, profitability and other key metrics help produce a strong company that has seen its share price drop off. It is available at a fair or slightly discounted price, depending on your choice of measures.

This company should get the attention of income investors who want an above-average dividend without taking too many chances. Because of its debt, few value investors will spend much time on it. But growth investors who are bullish on copper and patient may see an opportunity to get paid while they wait for capital gains.