Carl Icahn Has Been Loading Up on Xerox Stock

Xerox could be a turnaround opportunity

XRX, Financial) is a legacy printing company which was founded way back in 1906 and went public in 1982. Researchers at Xerox's famous Palo Alto research center (Xerox PARC) invented several important elements of personal computing, such as the computer mouse and the graphical user interface. These concepts were later adopted by giants like Apple (AAPL, Financial) and Microsoft (MSFT, Financial), helping form the foundations of the computer industry.

Since then, the company has faced many challenges from a declining legacy print business, which has caused their revenue to drop by one third since 2018. However, activist investor

Carl Icahn (Trades, Portfolio) is bullish on the company and has taken an activist stance on it. He is still trying to unlock value even after his failed attempts to enact a hostile takeover of larger rival HP Inc. (HPQ, Financial) by Xerox.

Icahn was buying even more shares of Xerox just this past April according to GuruFocus Real-Time Picks, a Premium feature. On the days of Icahn's two April buys of the stock, shares traded at an average price of a little over $17. This is only 32% higher than their $14 share price in 1982, which tells us a lot about the company's lackluster growth in the past half-century. Icahn's firm now owns 22.12% of Xerox's shares outstanding.

Icahn’s team is also heavily involved on the board of directors, with three out of 10 board members from Icahn Enterprises.

Is Icahn right about Xerox, or is he falling victim to the sunk cost fallacy? Let’s dive into the business model, financials and valuation to see if Xerox is a potential turnaround play. 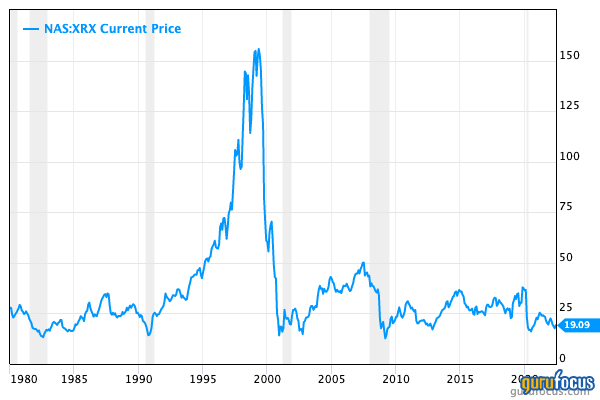 Xerox is still primarily a digital print business, but they are working on developing their “Three Pillars of Innovation,” which are 3D Printing, Internet of Things (IoT) and Clean Tech.

In 2021, Xerox announced a joint venture with the Victorian Government (a province of Australia) to commercialize a new technology called “Eloque,” which can remotely monitor structural health of railway bridges and roads. ServiceNow (

NOW, Financial) has also made an investment into Xerox’s newly formed CareAR, an augmented reality product which allows maintenance and service people to see and fix fault issues.

Xerox introduced four strategic initiatives in 2018 to turn around its business:

Their business is based on a model where a large portion of revenues are generated by multi-year contracts with approximately 80% coming from post sale revenue. Their legacy business also requires low annual capital expenditures (less than 1%). The company has made a commitment to return at least 50% of their free cash flow to shareholders through a combination of dividends and share repurchases while pursuing a merger and acquisition strategy.

Xerox has seen their revenue decline by nearly one third from $9.8 billion in 2018 to $7 billion by the end of 2021, while gross profit has decreased from $3.9 billion to $2.4 billion. This trend is not great to see and shows that adoption of their legacy print business products is declining. 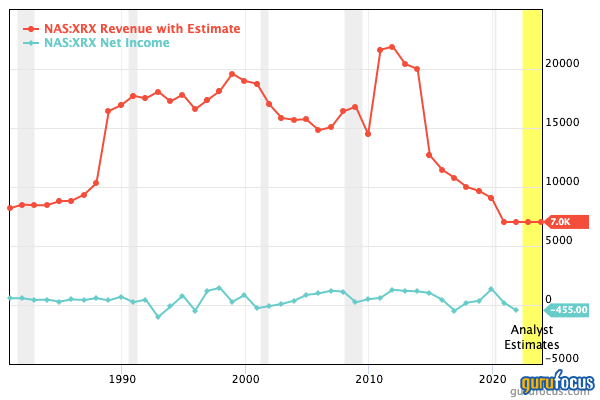 Xerox’s investments into their three innovation pillars could help to reverse this trend eventually, but they still have a long way to go. They may begin to focus more on a pure low-capex cash flow model, albeit with a smaller business by revenue.

The company generated a gross margin of 34% in its most recent quarter, which was down from prior levels, and their operating margin was just 4%. 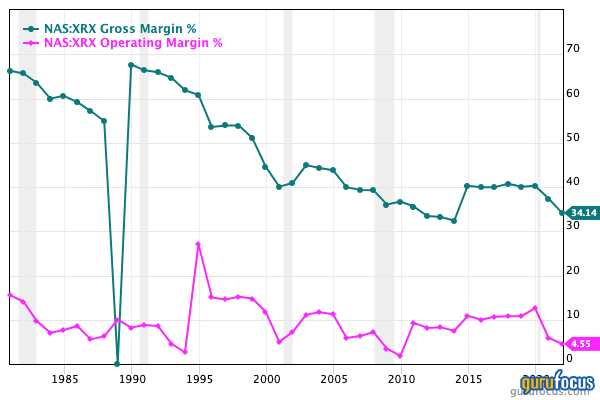 Their balance sheet has $1.8 billion in cash and cash equivalents, with $3.5 billion in long-term debt. This is fairly high debt, but that is what I would expect from a mature company in decline that is still trying to return cash to shareholders.

The GF Value chart, a unique intrinsic value measure from GuruFocus, shows the stock is modestly undervalued at current levels. 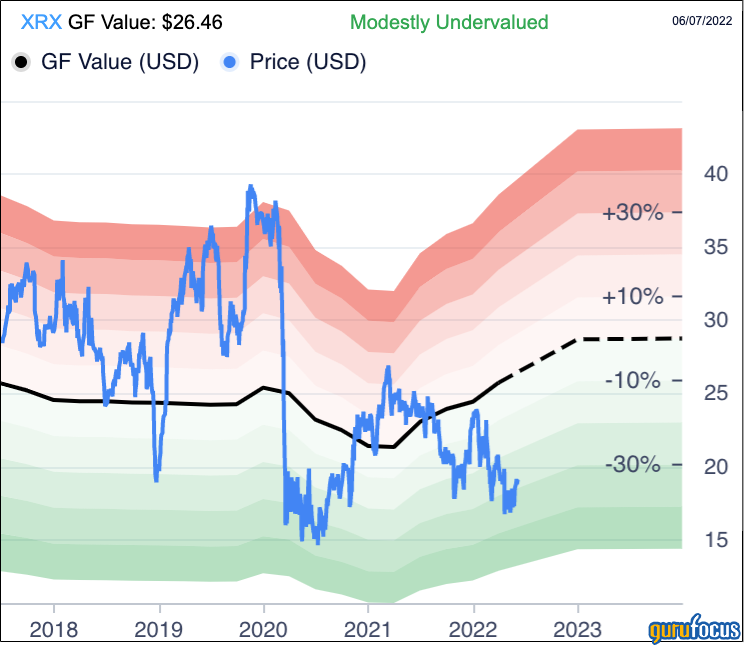 Xerox is a legendary company and has strong roots in the technology industry. The company's pivot towards the “three pillars of innovation” seems like the right strategy compared to just clinging to a dying business. However, they do seem late out of the starting blocks.

Carl Icahn (Trades, Portfolio)’s investment and heavy presence on the board makes me believe Xerox may have positive things in store for investors which Wall Street isn’t taking into account. While investors wait for Icahn to unlock value, the company's commitment to return 50% of cash flow to shareholders could sweeten the deal.