AVGO, Financial) has been one of the best stocks to own over the long term. The share price has more than doubled in value over the last five years while the company’s dividend has more than tripled.

Investors should always be more concerned with where a stock is headed than where it has come from, and shares of Broadcom have struggled in the near term. Shares are trading nearly 20% below their 52-week high, with much of this decline occurring this year.

Much of this weakness can be attributed to the market-wide decline that has occurred as there is a lot to like about the company, its growth prospects and dividend.

Let’s dig into why Broadcom, a highly diversified company, could be an enticing investment option.

Broadcom announced second-quarter earnings results for fiscal year 2022 on May 26. Revenue grew almost 23% to $8.1 billion and topped analysts’ estimates by $195 million. Adjusted earnings per share of $9.07 compared extremely favorably to $6.62 in the prior year and were 35 cents above expectations.

Semiconductor solutions, which is the larger of the two business units within the company, grew 77% to $6.2 billion, while infrastructure software improved 23% to $1.9 billion.

Growth was seen in almost every business. Networking revenue was up 44% to a record $2.2 billion due to heightened demand for the company’s artificial intelligence programs and strength in merchant switching and routing. Server storage was higher by 66% to $939 million as demand for next-generation server storage continues to grow. Broadband increased 24% to $1.1 billion following deployment of next-generation products. Leadership expects all three of these businesses to continue to see very high growth rates in the current quarter.

Wireless grew 6% to $1.7 billion and industrial was higher by 14% to $254 million due to strength in electric vehicles, factory automation, health care and renewable energy.

Rounding out the quarter, Broadcom repurchased 4.7 million shares at an average price of $590. Leadership announced a new $10 billion stock repurchase authorization as well.

Analysts expect that Broadcom will earn $36.87 per share in 2022, which would be a 32% increase from the prior fiscal year.

Revenue for the quarter was a company record, driven by demand in both segments. Results came on top of very strong figures in the prior year, as the second quarter of 2021 saw a 15% improvement on the top line. This is even more impressive as lead times for products remain extended due to supply chain constraints.

Despite supply chain issues, the hardware backlog of $29 billion improved $4 billion sequentially and $8 billion year over year. The software backlog was up $1 billion in the prior year to $15 billion.

Semiconductor revenue has experienced an acceleration as revenue growth was better than the 20% improvement that the segment produced in the first quarter. This trend is projected to continue with a 31% increase in the third quarter of the year.

Recurring revenue continues to be a strong point for the company as Broadcom’s annual recurring revenue improved 4% to $5.4 billion. Consolidated renewal rates averaged 120%, reaching 136% in the company’s key accounts. Of the renewals, more than 90% were for subscription and maintenance, showing that product offerings are resonating with customers.

In addition to a strong quarterly report, Broadcom announced it is purchasing VMware Inc. (

VMW, Financial) for nearly $61 billion in cash and stock. This is one of the largest technology transactions in history and further blosters Broadcom’s software product lineup. This follows multiple transactions, including CA Technologies in 2018 and Symantec in 2019, over the past few years that were completed to improve the company's software business.

VMware had been switching to more of a subscription model itself, something that Broadcom has been fairly successful at doing. The deal, if completed, will mean that recurring software sales will contribute nearly half of annual sales. These sales are much more predictable even if they grow at slightly lower rates.

The most recent quarterly report coupled with the acquisition of VMware should enable Broadcom to continue to grow its dividend at a high rate.

Broadcom has raised its dividend for 11 consecutive years. Growth has been very robust as the company has a five- and 10-year compound annual growth rate of 31.5% and 142%. This occurred even as the share count nearly doubled over the past decade.

Important for investors, dividend growth looks likely to continue as well. Broadcom distributed $14.40 of dividends per share in 2021 while generating earnings per share of $28. This equates to a payout ratio of 51%.

The company is projected to distribute dividends per share of $16.40 for 2022, implying an expected payout ratio of 46%. This compares to the 41% payout ratio that Broadcom has averaged since 2016.

Free cash flow also shows a similar picture of safety. The company has paid out $1.75 billion worth of dividends over the last 12 months. At the same time, Broadcom produced free cash flow of $4.2 billion, resulting in a payout ratio of 42%. This is very close to the three-year average of 44%.

Turning to debt obligations, Broadcom had interest expense of $1.77 billion over the last year. The company had total debt of $39.2 billion at the end of the second quarter, resulting in a weighted average interest rate of 4.5%.

The table below illustrates where Broadcom’s weighted average interest rate would need to reach before dividends were not covered by the company’s free cash flow.

Broadcom’s weighted average interest rate would need to rise above 10.6% before dividends were not sufficiently covered by free cash flow. As such, debt does not appear to be a major factor in future dividend payments.

Shares yield just over 3% today, very close to the five-year average yield of 3.2% and double the average of the S&P 500 Index.

The GF Value chart shows that Broadcom is fairly valued on an intrinsic basis. 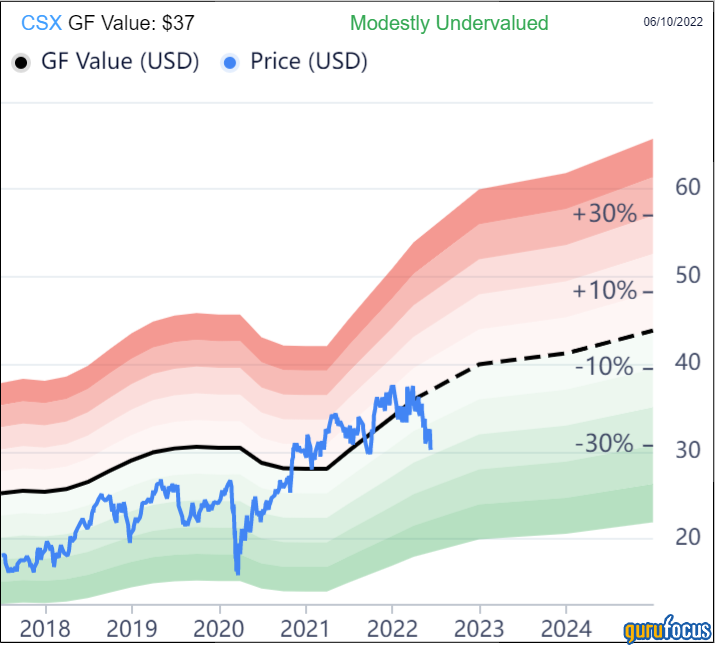 With a GF Value of $523.41, Broadcom has a price-to-GF Value of 1.03, earning the stock a rating of fairly valued from GuruFocus.

Broadcom’s second quarter outperformed the average analysts’ estimate both on the top and bottom lines. The company experienced growth in key areas, with the expectation that growth would continue and, in some cases, accelerate in the current quarter.

The company’s record-setting purchase of VMware will be a major addition and should strength Broadcom’s software business even further.

This likely means that Broadcom’s dividend will continue to see high rates of growth amid very reasonable payout ratios.

Despite a strong quarter and future outlook, shares are trading very close to both the historical multiple and its intrinsic value. Broadcom’s business model and dividend make the name an ideal pick for those looking for technology exposure.