3 Beaten-Down Names to Consider for Total Returns and Income

The nearly 19% decline in the S&P 500 year to date has led to many stocks falling, even those that have strong business models. As a result, investors can find high-quality stocks trading near their 52-week lows. Dividend yields have become more attractive as a result, giving income investors a chance to purchase shares of companies with higher-than-usual yields.

I will examine three stocks trading close to their 52-week low, have a dividend yield of at least 3% and trade at a discount to their intrinsic value.

DLR, Financial), a leading real estate investment trust that specializes in the development of properties used for technology purposes. The $39 billion trust has endured a difficult 2022. 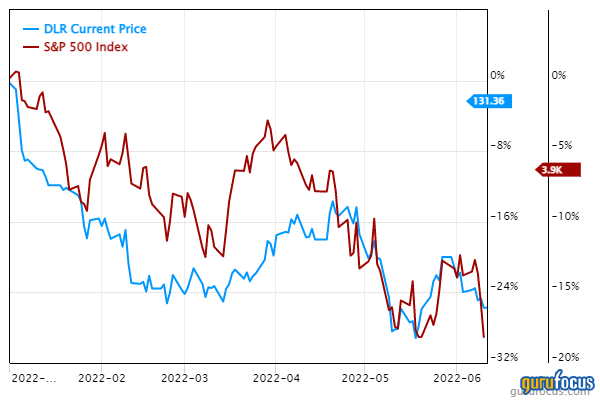 Despite this weakness in the stock, there is a lot to like about the business. Digital Reality Trust reported first-quarter earnings results at the end of April, with the trust’s funds from operation and revenue both coming in just above what Wall Street analysts had anticipated.

What was very impressive was that the first quarter of the prior year was one of Digital Reality Trust’s best performance in recent history. Even so, core funds from operation of $484.5 million for the most recent quarter was a slight improvement from the prior year.

Digital Reality Trust looks to continue to build on this success due to the strength of its pipeline. The trust signed total bookings in the first quarter that are expected to add $167 million to annualized base rent, which is a new record.

Shares are modestly undervalued compared to their intrinsic value according to the GF Value chart. 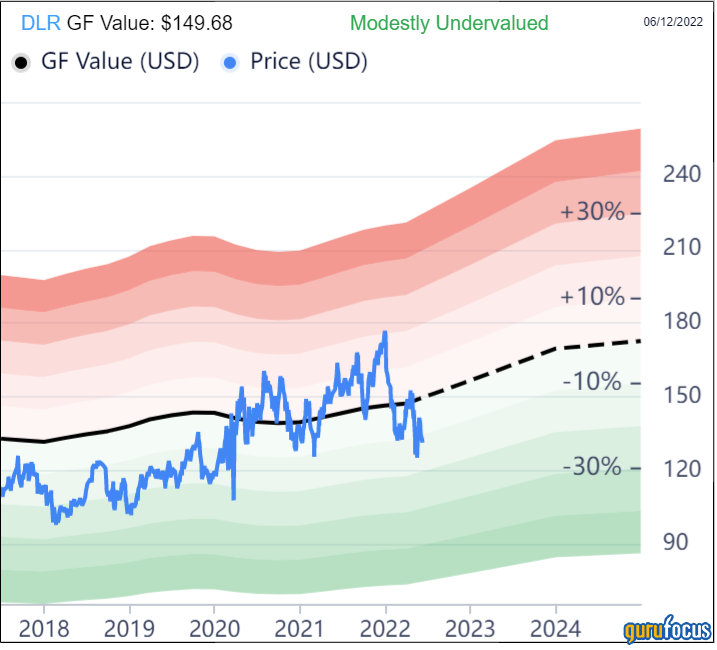 With a share price of $131.36 and a GF Value of $149.68, Digital Reality Trust has a price-to-GF Value of 0.88. Reaching the GF Value would result in a 13.9% gain from the most recent closing price. Factor in the dividend and total returns could stretch into the upper teens range.

Next up is Hasbro Inc. (

HAS, Financial), a top producer of family and leisure toys and games. The company is valued at $12 billion. Hasbro has outperformed the S&P 500 by a small amount so far this year. 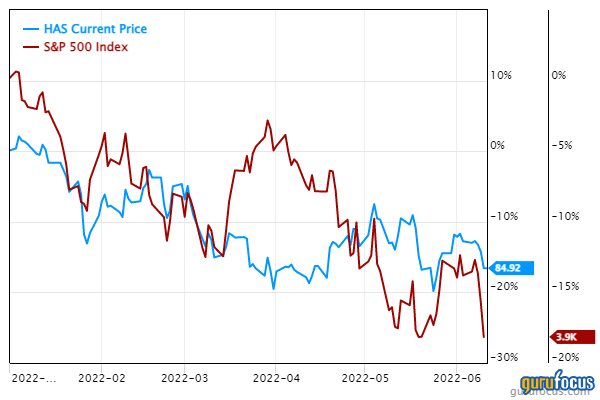 The most recent quarter was mixed, with first-quarter revenue growing 4.5%, but earnings per share missing by 7 cents. Currency exchange lowered top-line results by approximately 2% and the Russian invasion of Ukraine was estimated to be a $100 million detriment to revenue figures. Supply chain constraints also impacted the business.

There are positives working in Hasbro’s favor, as the company has some key brands in its portfolio, including Transformers, Nerf, My Little Pony, Monopoly, Play-Doh and Magic: The Gathering. All of these product lines demonstrated growth in the quarter. Earlier this year, it was announced that the Walt Disney Co. (

Hasbro did pause its dividend in 2020 as the company dealt with the unknown of the Covid-19 pandemic. Shareholders received the same quarterly payment of 68 cents per share for 12 consecutive payments before the company increased its dividend by 2.9% for the May 16 distribution. Even with the pause, the dividend has a compound annual growth rate of 5.1% since 2012. Hasbro yields 3.3%, better than its 10-year average yield of 3%.

The stock looks undervalued looking at the GF Value chart. 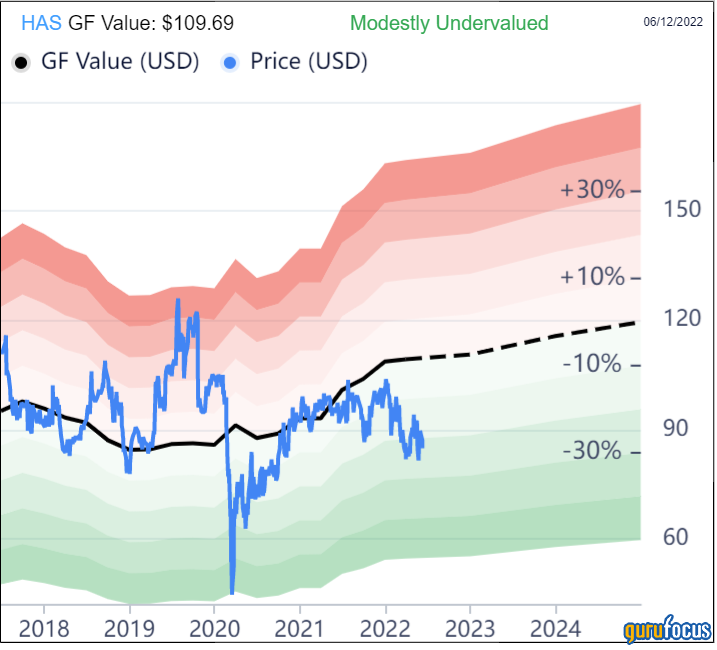 The final name to consider is Verizon Communications (

VZ, Financial), one of the largest wireless carrier in the U.S. The $214 billion company has fared considerably better than the S&P 500 Index this year. 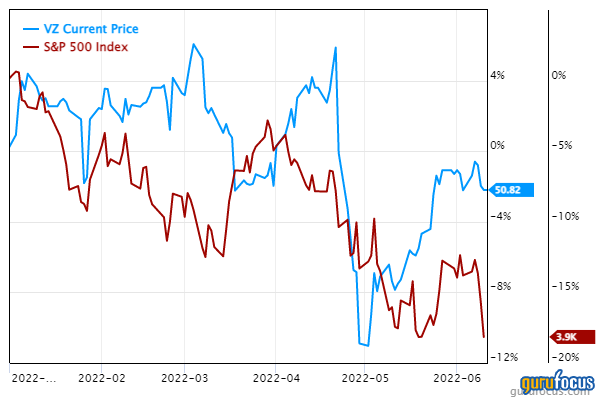 The company’s most recent quarter showed mixed results. Revenue came up slightly less than what the market had expected, but still grew 2.1% from the prior year. Earnings per share was 4 cents better than the prior year and in line with estimates.

Verizon did see a net loss of 36,000 wireless postpaid phone subscribers. A loss in the first quarter is normal for the company as this was the ninth consecutive year where subscribers were lost. However, this was the lowest number of net losses during this period.

Despite this, wireless revenue improved 9.5% as wireless activations grew 11% and retail postpaid churn remained very low at 0.83%. Average revenue per account was up 2.6%.

Verizon benefits from operating in an industry with few major players. There are now just three major carriers, limiting customer options when choosing an operator for service.

Also helping matters is that most of the company’s customers have not yet upgraded to a device capable of accessing the company’s 5G network. The transition to 5G is underway and Verizon appears poised to be a beneficiary of the service. The company estimates that nearly 175 million people will be covered by 5G service by year’s end. 5G service deployment and adoption are moving at a faster rate than the 4G LTE launch. This should provide additional tailwinds to the company’s business model going forward.

Verizon’s dividend growth remains on the low side, including a 2% increase for the Nov. 1, 2021 payment. The latest raise is just shy of the average raise of 2.2% since 2012, but extends the company’s dividend growth streak to 15 consecutive years. What Verizon lacks in dividend growth it makes up for with a high yield. The stock yields 5%, which is ahead of the 10-year average yield of 4.5%.

The GF Value charts shows that Verizon’s stock to be modestly undervalued. 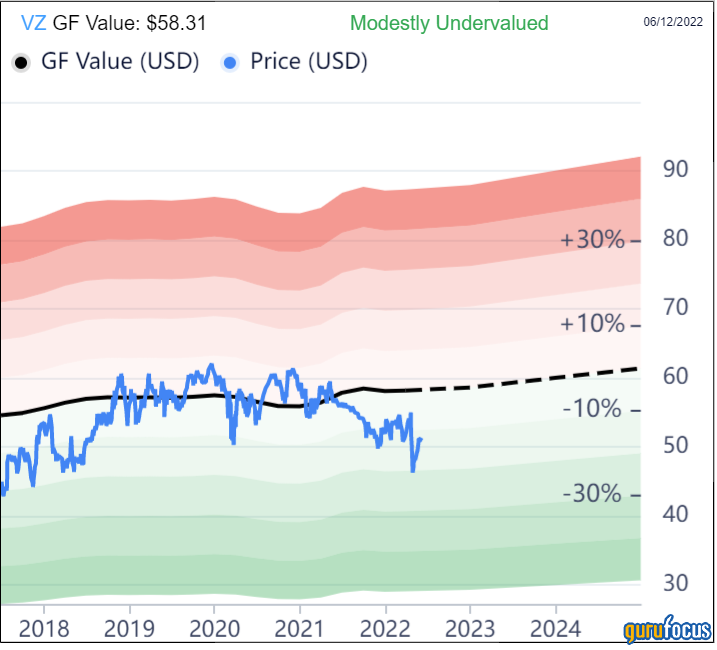 With shares trading at $50.82 and the GF Value estimated to be $58.31, Verizon has a price-to-GF Value of 0.87. Shares trading at a 14.7% discount to their intrinsic value. Combined with the dividend yield, total returns could begin to approach 20%.

The market drawdown means many stocks are being sold off, even those with sound business models and long track records of dividend growth.

For the opportunistic investor, this can be an excellent chance to pick up shares of beaten-down stocks trading at a discount to their intrinsic valuation. Digital Realty Trust, Hasbro and Verizon are three examples of stocks trading very close to their 52-week low. All three companies are leaders in their respective industries and each offers a generous dividend yield.

This suggests Digital Realty Trust, Hasbro and Verizon could be good opportunities for those looking for a combination of strong total returns and high yield.