These companies have predictable businesses while offering potential value 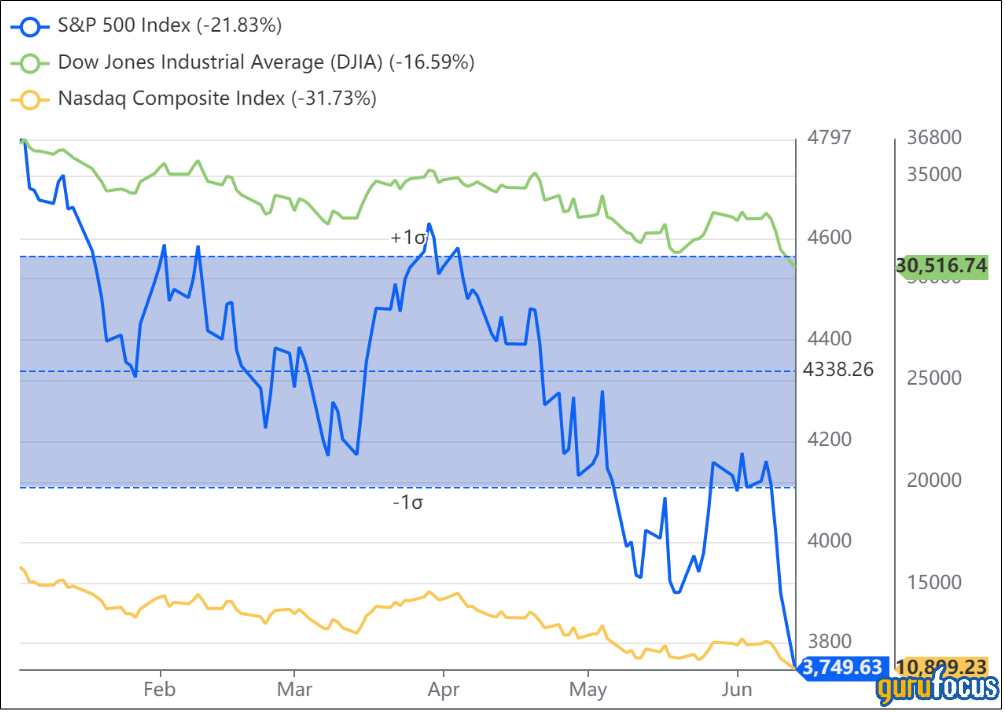 Despite selling products that are in demand regardless of market conditions, the consumer defensive sector as a whole has not performed well so far this year, tumbling 15.12%. 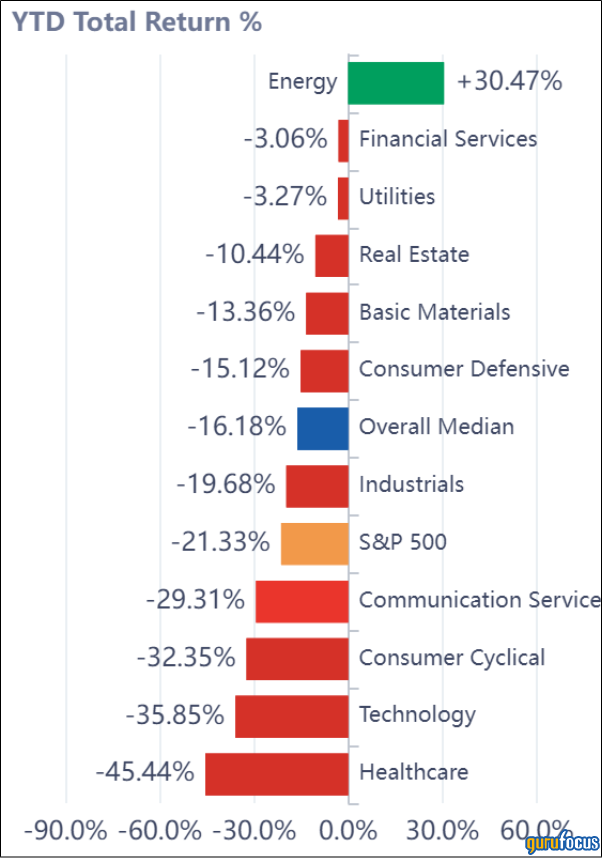 As a result, investors may be interested in finding opportunities among undervalued consumer defensive securities that have predictable performances.

GuruFocus’ Undervalued Predictable Screener, a Premium feature, determines whether a stock is undervalued or overvalued based on two methods: discounted cash flow and discounted earnings.

According to both methods, companies with a discount higher than zero are consider undervalued, while discounts below zero are considered overvalued. The companies’ predictability rates are then determined based on historical performance over the past decade.

The screener also looks for companies with predictability ranks of at least four out of five stars.

Based on these criteria, a handful of consumer defensive stocks qualified for the screener as of June 14, including Tyson Foods Inc. (

The Springdale, Arkansas-based processor of chicken, beef and pork products has a $30.25 billion market cap; its shares closed at $83.66 on Tuesday with a price-earnings ratio of 7.54, a price-book ratio of 1.60 and a price-sales ratio of 0.59.

The GF Value Line suggests the stock is fairly valued currently based on historical ratios, past financial performance and future earnings projections. 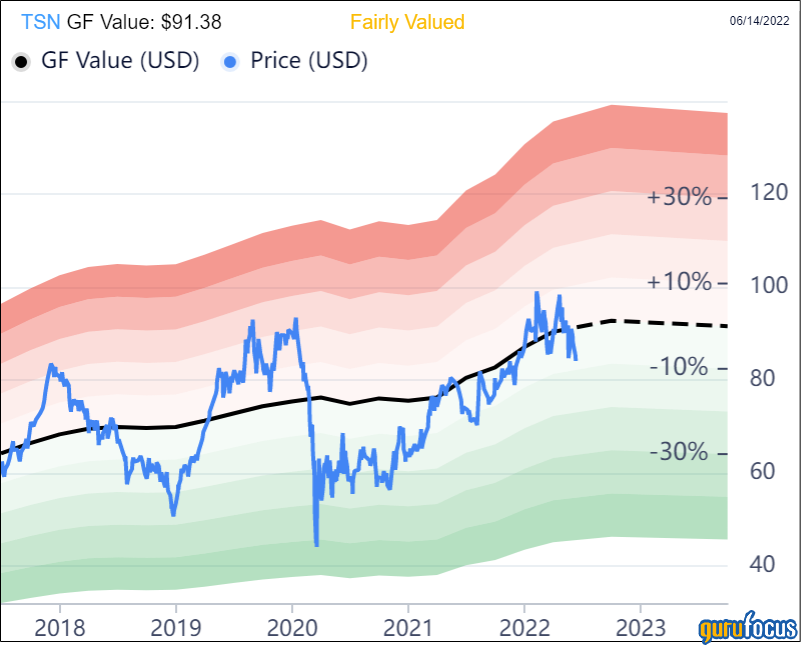 It also has a strong GF Score of 93 out of 100, based on high ranks for growth and profitability as well as middling marks for financial strength, momentum and GF Value. As such, Tyson has high outperformance potential. 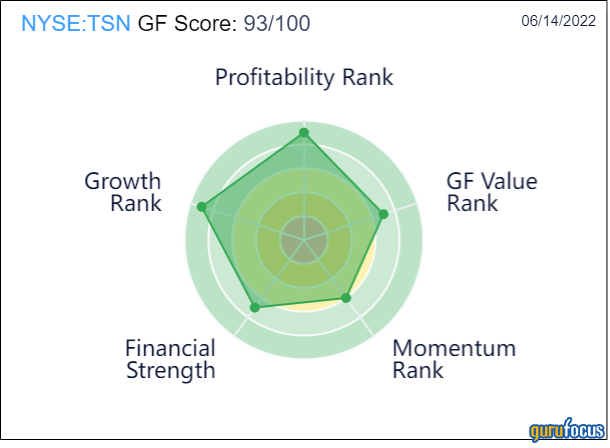 Tyson’s financial strength was rated 7 out of 10 by GuruFocus. In addition to adequate interest coverage, the Altman Z-Score of 3.92 indicates the company is in good standing even though assets are building up at a faster rate than revenue is growing. The return on invested capital also overshadows the weighted average cost of capital, meaning value is being created as the company grows.

The company’s profitability fared better, scoring a 9 out of 10 rating. In addition to operating margin expansion, it is supported by returns on equity, assets and capital that outperform competitors as well as a high Piotroski F-Score of 8 out of 9, indicating conditions are healthy. Due to consistent earnings and revenue growth, Tyson has a four-star predictability rank. According to GuruFocus research, companies with this rank return an average of 9.8% annually over a 10-year period.

Of the gurus invested in Tyson Foods, the

The supermarket chain headquartered in Black Mountain, North Carolina has a market cap of $1.65 billion; its shares were trading around $87.08 on Tuesday with a price-earnings ratio of 5.91, a price-book ratio of 1.49 and a price-sales ratio of 0.31. 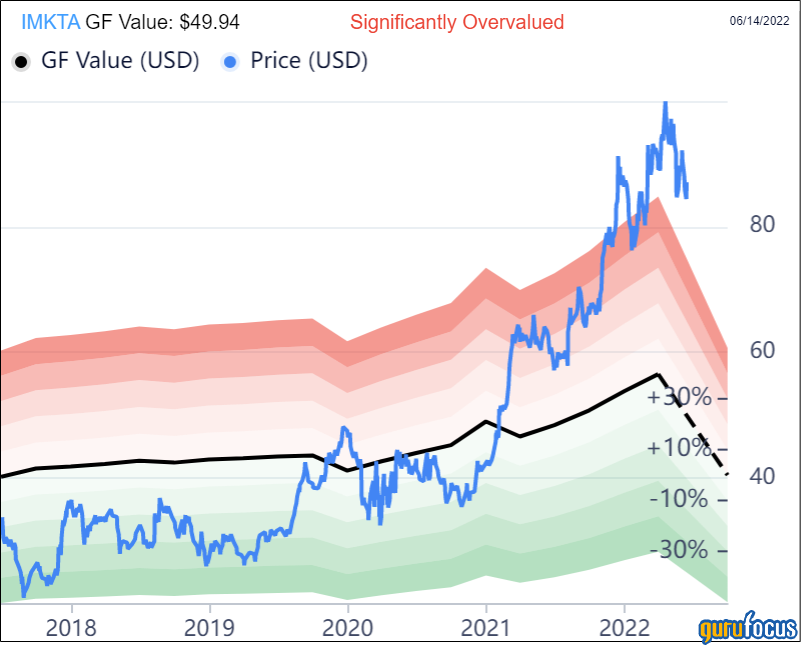 It also has a GF Score of 80 out of 100, receiving high marks for growth and profitability, a middling rank for financial strength and low grades for momentum and GF Value. As such, Tyson has average performance potential. 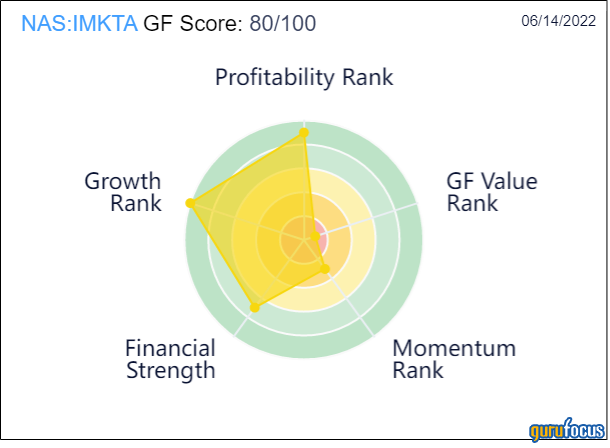 GuruFocus rated Ingles Markets’ financial strength 7 out of 10 on the back of sufficient interest coverage and a high Altman Z-Score of 5.06. The ROIC also eclipses the WACC, so value is being created.

The company’s profitability scored a 9 out of 10 rating, driven by operating margin expansion, strong returns that top a majority of industry peers and a high Piotroski F-Score of 8. Steady earnings and revenue growth also contributed to a 4.5-star predictability rank. GuruFocus data shows companies with this rank return, on average, 10.6% annually.

With 4.28% of its outstanding shares,

The British consumer goods manufacturer, which is known for the Axe, Dove, Knorr, Vaseline, Hellmann’s and Ben & Jerry’s brands, has a $110.61 billion market cap; its shares were trading around $43.34 on Tuesday with a price-earnings ratio of 17.94, a price-book ratio of 6.27 and a price-sales ratio of 2.06. 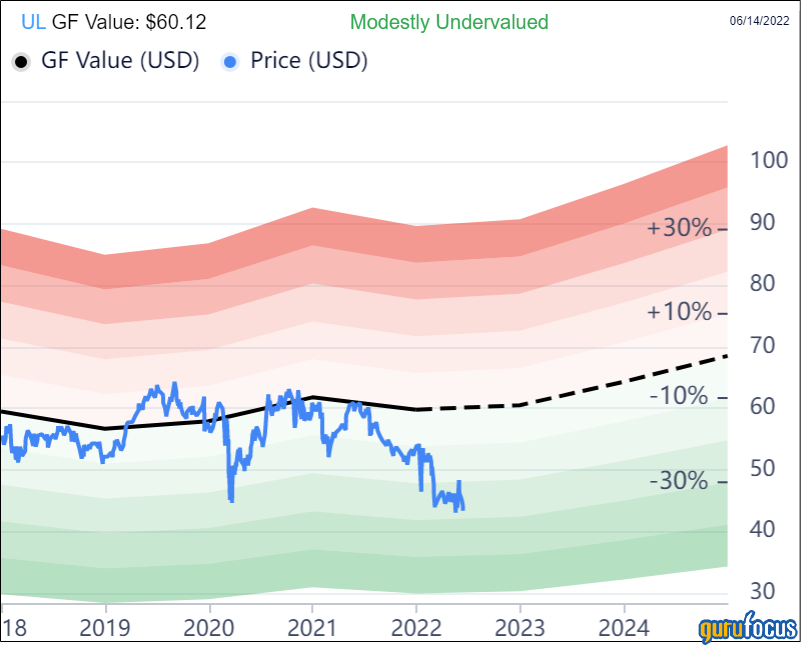 The company has a GF Score of 83 out of 100, indicating good outperformance potential. It raked in high points for GF Value, profitability and growth, a middling mark for financial strength and a low grade for momentum. 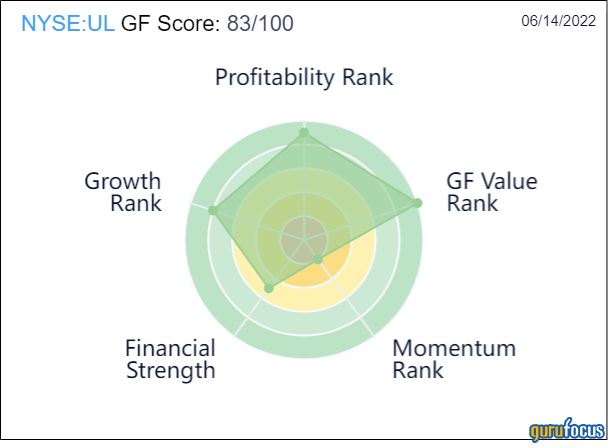 Unilever’s financial strength was rated 5 out of 10 by GuruFocus. Although the company has issued new long-term debt in recent years, it is still manageable due to a comfortable level of interest coverage. The ROIC also exceeds the WACC, meaning value creation is occurring.

The company’s profitability scored a 9 out of 10 rating as a result of operating margin expansion and strong returns that top a majority of competitors. Unilever also has a moderate Piotroski F-Score of 5, indicating conditions are typical for a stable company. Due to a decline in revenue per share, the 4.5-star predictability rank is on watch.