What Does the Fed's Rate Hike Mean for Investors?

More hawkish policy is a paradigm shift for markets

As expected, Wednesday's Federal Open Market Committee meeting produced a third successive interest rate hike. However, this time the increase was 75 basis points, larger than the 50 basis points increase in May, with the Federal Reserve continuing its more aggressive pace of monetary policy tightening.

This was the largest rate increase at a FOMC meeting since 1994 and it takes the range for policy interest rates to 1.50% to 1.75%. There was one dissenter, Esther George, president of the Fed’s Kansas City branch, who voted instead for a second successive 50 basis point increase. It appears that a significant majority of committee members were comfortable with the more aggressive stance. The guidance also confirmed that more rate rises are in store with a 75-point increase now possible in July and further hikes through the autumn and into next year designed to take the policy rate well above its estimated "neutral" level and into hawkish territory.

It is interesting that Fed policymakers decided to raise rates by 75 basis points, even though they were signalling going into the meeting that the hike was likely to be 50 basis points again. This shows just how rapidly things are moving right now. There was some speculation recently that the Fed might go for a larger increase, and perhaps they felt compelled to do so because of inflation. The consumer price index printed much higher than expected in May and it is likely that inflation expectations are also rising.

The Fed’s actions also hint they might be somewhat concerned about losing credibility. A lot of market participants and commentators are saying they are not moving quickly enough, and that is also my view. To move from behind the curve to back on the curve would have been a bigger priority than sticking to previous guidance. This indicates the Fed might have woken up to the economic situation and could lead the way to significant additional rate increases in the second half of the year, with perhaps another 75-point raise in July becoming quite possible now. The central bank has essentially signalled that those within the FOMC who favor aggressive policy tightening are currently dominating the thinking inside the Fed.

The updated dot plot of Fed policymakers shows interest rates are now expected to rise by much more than was guided in the previous update in March. Now, the median expectation for interest rates by year-end is 3.4%, versus 1.9% in March. By the end of 2023, it is expected to be 3.8% versus 2.8% previously. So even after Wednesday's move, the FOMC expects interest rates to get to about double their current level by year's end. Also, rates are seen rising to above the Fed’s estimated “neutral level,” which policymakers think is somewhere around 2% 5o 3% (it cannot be exactly measured, only estimated). This means monetary policy is about to become much more hawkish and more restrictive on economic growth than it has been since pretty much before the global financial crisis, which started in 2007. 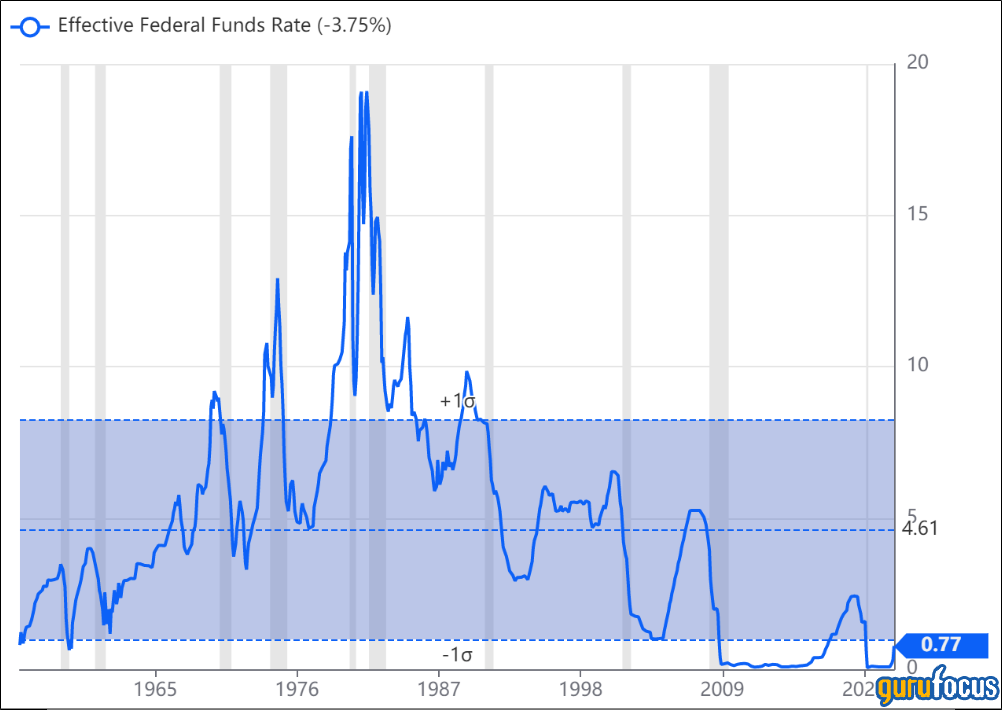 We also saw updates to the projections for other economic variables. The PCE deflator, the Fed’s preferred metric for inflation, is now forecast be about 5.2% at year end, compared with the previous estimate of 4.3%. The Fed now expects it to fall to 2.6% in 2023 (previously 2.7%) and to 2.3% in 2024 (unchanged). Even though inflation massively overshot expectations this year, the central bank still expects it to fall sharply next year and get back close to the target of 2% by the end of 2024. The press release contained an updated statement that “the Committee is strongly committed to returning inflation to its 2 percent objective” and Jerome Powell repeated this during his press conference. Clearly the FOMC is confident its commitment can get inflation back on target as reflected in its latest forecast. Powell did caution several times that energy and commodity prices were outside the control of the Fed, and these do feed into headline inflation, which is the inflation everyday people care about.

The median forecast for gross domestic product growth has been revised down to 1.7% for 2022 (from 2.8%), while the forecasts for 2023 and 2024 have also be revised down to 1.7% (from 2.2%) and to 1.9% (from 2.0%), respectively. This means the FOMC recognizes slower growth to be a consequence of its hawkish policy going forward. The Fed would be happy with this outcome as it could be characterized as a soft landing given 1.7% is in the ballpark of the estimate of trend rate economic growth of 1.8%. Also, the Fed expects the unemployment rate to rise to 4.1% by the end of 2024, from 3.7% now. Again, this is in the ballpark of the Fed’s estimate of the unemployment rate, which is consistent with full employment at 4%.

Perhaps the Fed is being complacent as its projections are relatively rosy for an aggressive path of interest rate hikes that is now in play and that has been signalled is coming. Ultimately, it shows the Fed is more concerned with inflation right now after arguably being too slow to react to it over the last few months at least.

Recent market volatility has been driven by uncertainty about the extent of likely rate increases and the potential impact on the economy. The U.S. dollar has traded close to its 2022 highs against both the euro and sterling as interest rate differentials move in favor of holding dollars.

A normalizing of interest rates should be good for value stocks and banks and bad for growth stocks and emerging markets. Higher interest rates mean a higher discount factor, making near-term cash flows relatively more valuable than cash flows only expected to come further out in the future.

Real interest rates are still negative, which is good for hard assets such as gold (

GLD, Financial), which have inflation protection properties. But if the Fed’s projections are correct, real interest rates will average positive levels over the course of 2023, which would suggest the riskiest assets, i.e., those without any cash flows, could underperform going forward. This is based on the idea that the cost of carry (for leveraged investors) will now be meaningful, and assets that do not provide income to cover the financing cost become relatively less attractive as the “carry” (or spread between yield and borrowing cost) becomes negative on those assets.

I feel that if we take the returns of assets or equity styles over the last 10 years and we look to the next 10 years, then we could quite easily quote Matthew 20:16, “So the last shall be first, and the first, last.” We could paraphrase this as: “So the value stocks (

IUSV, Financial) shall outperform, and the growth stocks (IUSG, Financial), underperform.” After all, when it comes to markets, the Federal Reserve is like a god.

The next Fed policy announcement and press conference will be on July 27.