The business, despite being cyclical and capital intensive, has a high margin of safety

Research has found companies that operate closer to the beginning of the production chain are better suited to survive in periods of inflation because they produce essential products or materials used by other businesses and production chains, or they have more options to pass the higher costs on to consumers. Whatever the reason, such companies are believed to absorb and suffer from the shock to a lesser degree because they pass it on to other companies.

One such company that stands out based on in its economic properties among comparable businesses and inherently serves as protection from rising oil prices is LyondellBasell Industries N.V. (

LyondellBasell is a multinational petrochemical company incorporated in the Netherlands with U.S. operations. It is a large producer of polyethylene, polypropylene, ethylene, propylene and polyolefins. These chemicals serve as building blocks for further production of many plastics and resins in a wide variety of end markets. Packaging, containers, foams, films and plastic goods are some examples of a broad array of applications for these chemicals in the production of goods that surround us in everyday life.

Oil prices seem to serve as a good predictor for the company's revenue, but they are not the sole indicator. The price for polymers, olefins and ethylene is driven by supply and demand for these chemicals. However, oil is a main raw material for their production.

The chart below shows the price of oil appears to correlate with the fluctuations in LyondellBasell's revenue.

There is a third common factor that influences prices for both - economic activity.

In recent years, polymer prices were believed by some analysts to have "divorced” themselves from the crude oil prices because, according to The Economic Times, most of the polymers are now coming in through the gas route and there is plenty of gas available in the Middle East. But what matters most for the purpose of this discussion is that the revenue of polymer producers still correlates with oil and gas prices and, therefore, can be compared to the refinery business. There is no intention to analyze the underlying forces and global pricing mechanisms, which would explain why oil and gas price affect the price of chemicals.

Revenue is not the only driver for the well-being of the business. The following graph shows the margin stability of LyondellBasell compared to major refinery companies, including Marathon Petroleum Corp. (

MPC, Financial), Phillips 66 (PSX, Financial) and Valero Energy Corp. (VLO, Financial). The refinery business was chosen as the peer group because its revenue is also dependent on oil prices, but what we see here is that LyondellBasell's margins are higher and more stable. 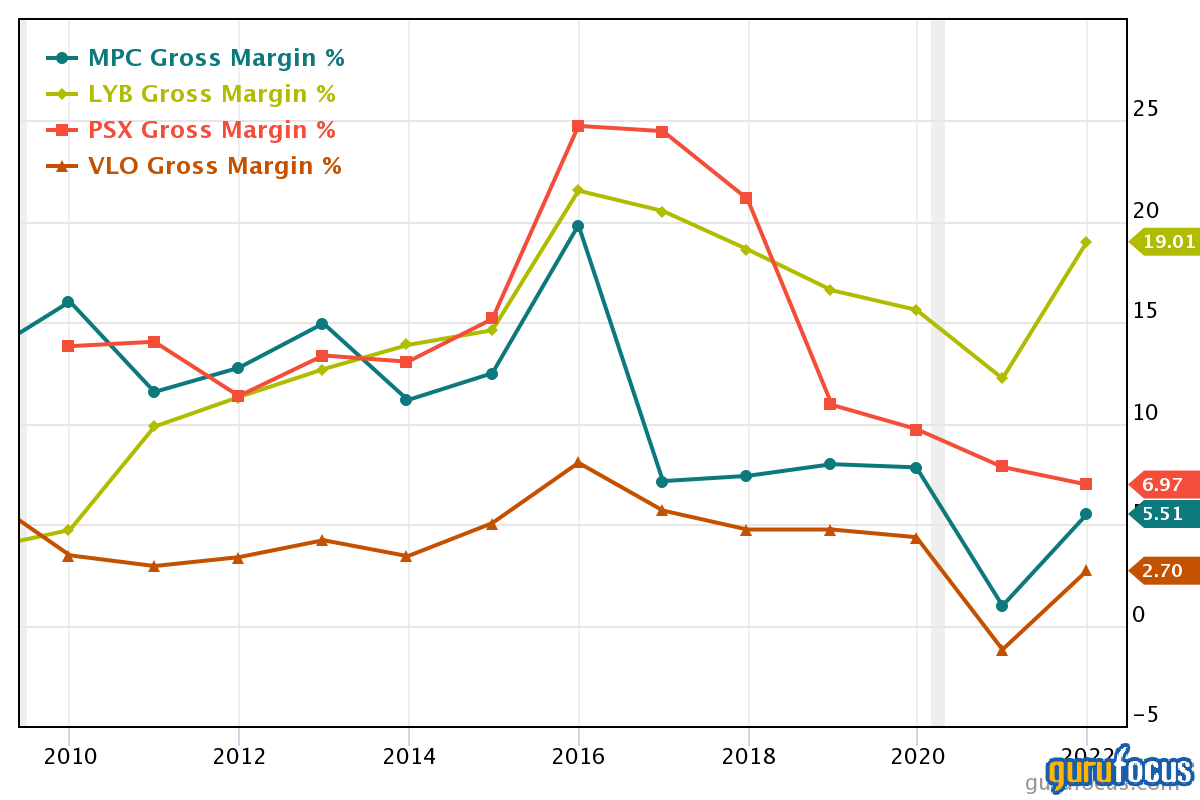 The business has the same revenue drivers as a refinery, but better margins and stability (less deviation in bad and good times) coupled with a much higher return on invested capital. Based on this assessment, Petrochemical seems to simply be a better business than a refinery in terms of all return indicators.

The price to pay for this superiority is a higher price-sales ratio for LyondellBasell.

The company's current market cap stands at approximately $30 billion. However, it would be an incomplete picture to view the market capitalization of LyondellBasell without respect to the price of oil since we established it as a key driver earlier.

While there have been some periods where the two were aligned, the chart below shows that has not always been the case. 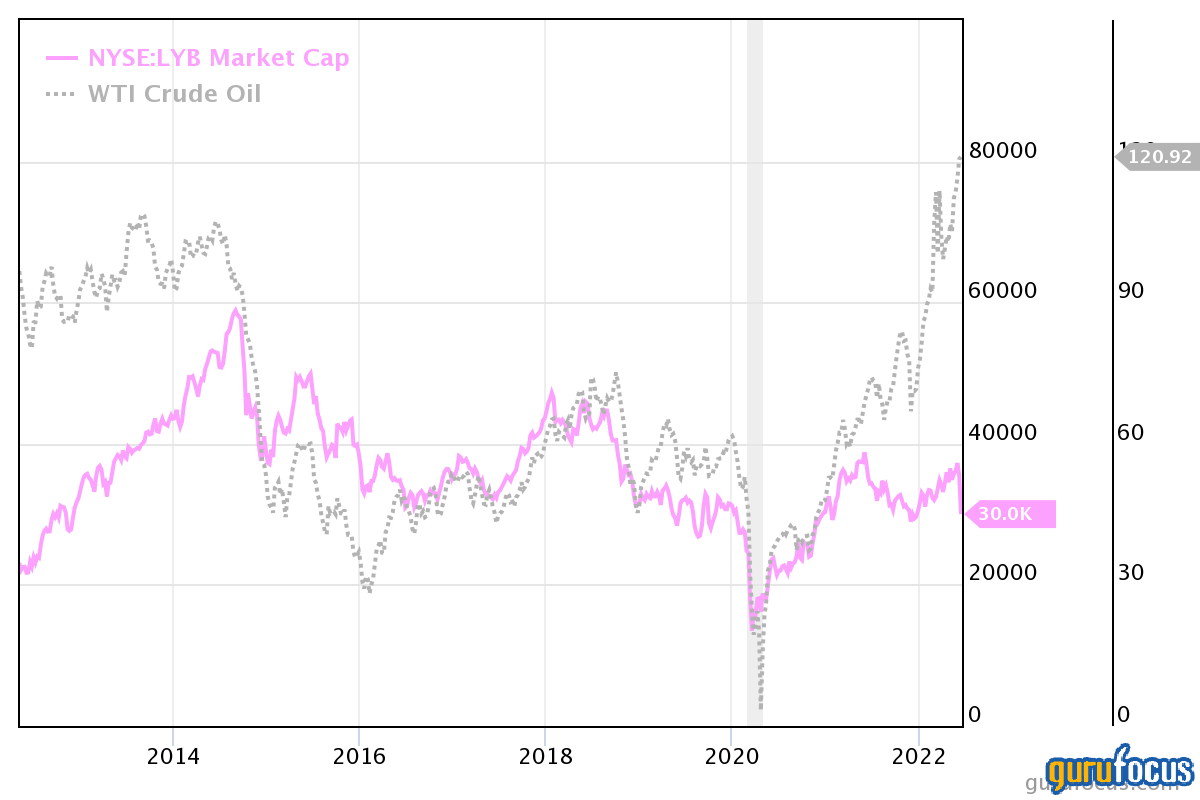 The current price-sales ratio of LyondellBasell is one of the lowest in recent years and, therefore, can also be used to gauge the potential opportunity.

In order to come up with a margin of safety estimate, I used GuruFocus' discounted cash flow model with very conservative input parameters, including earnings per share of $10, a discount rate of 10% and a growth rate of earnings of 6% per year. This comes to a comfortable 34% margin of safety.

The company buys back its shares at a very attractive three-year average annual rate of 4.3%. For a long-term investor, this would be an important factor. Consider 2014, when LyondellBasell earned the revenue and net profit comparable to the numbers of last year (2021). But at that time, the company had roughly 486 million of shares outstanding, while there are around 328 million outstanding today. Again, it seems the market had not priced in that decrease in shares outstanding yet.

The dividend yield of around 5% seems attractive. The payout ratio for 2021 was 0.26, which is considered comfortable by most companies. However, in 2020, it took almost all of the company's earnings to pay shareholders the level of dividends they were used to.

Overall, I believe LyondellBasell is an example of a decent cyclical company that will reverse closer to its average price-book ratio of 1 while offering a comfortable dividend yield and a decent margin of safety. Therefore, it could be considered a potential defensive investment.