HVT, Financial) flies beneath the radar of most investors. That’s not surprising since it had a market cap of just $418.89 million at the close of trading on June 23.

Yet, I believe this stock deserves more attention than it gets. It has earned a GF Score of 94 out of 100, one of the highest scores available among the many thousands of public stocks. It has excellent fundamentals, looks undervalued on several metrics and pays a dividend yield of more than 4%.

Haverty, or Havertys Furniture as it labels its retail locations, was founded in 1885 and is based in Atlanta, Georgia. According to its website, it is a full-service home furnishings retailer, with 120+ showrooms in 16 states of the South and Midwest regions in the U.S. It offers a wide selection of merchandise in the middle and upper-middle price ranges.

The typical customer demographic is described as follows in the 10-K for 2021: “Havertys customers are typically well-educated women in middle to upper-middle income households. They generally own homes in the suburbs and their diverse personalities are reflected in their unique sense of style.”

Because home furnishings are postponable purchases, the industry is sensitive to economic cycles. With some economic observers now warning of a potential recession, investors should heed the following warning in the 10-K: “Should the current economic recovery falter or the current recovery in housing starts to stall, consumer confidence and demand for home furnishings could deteriorate, which could adversely affect our business through its impact on the performance of our stores.”

At the same time, Haverty has been in this business since 1885, and has experienced many slow periods, many recessions and even a few depressions. Given its excellent financial strength, it should be able to come out the other side of a recession intact.

As the 10-K points out, the retail side of home furnishings is fragmented and competitive. There are many other furniture retailers, as well as furniture manufacturers that operate their own retail outlets and department stores. That fragmentation has increased with the growth of e-commerce channels.

Although it is a relatively small company, it claims to several competitive advantages:

Below is a screenshot of the company's GuruFocus Financial Strength summary: 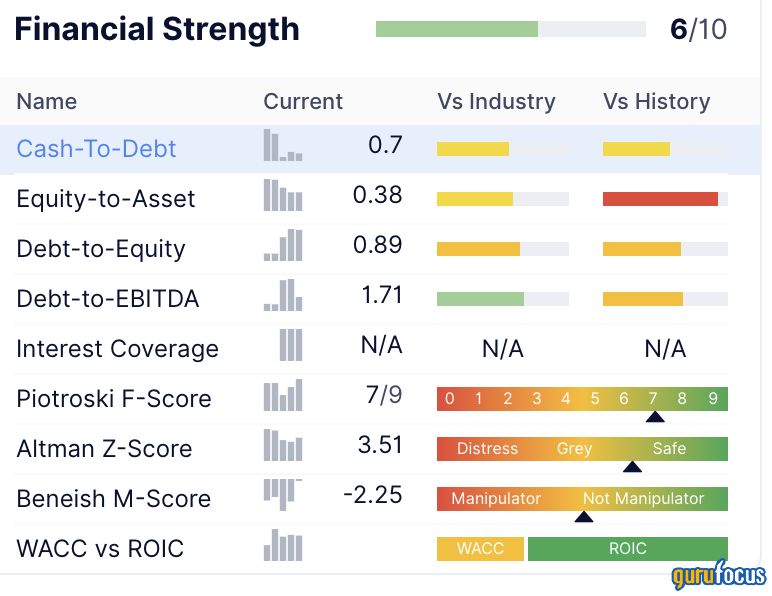 It has a surprisingly low 6 out of 10 ranking for a company that has no short-term or long-term debt, but it does have long-term capital lease obligations of $197 million compared to cash and cash equivalents of $162 million, so it needs to continue generating cash in order to pay the rent.

Despite the middling financial strength ranking, the Altman Z-Score of 3.51 indicates Haverty is not likely to be at risk of bankruptcy in the next two years.

That’s reinforced by the company’s ability to create value for shareholders. The weighted cost of capital (WACC) is 7.87% compared to the return on invested capital (ROIC) of 17.30%.

Haverty scores close to full marks for profitability, but there are a couple of reasons why it fell a bit short of a perfect 10 out of 10. 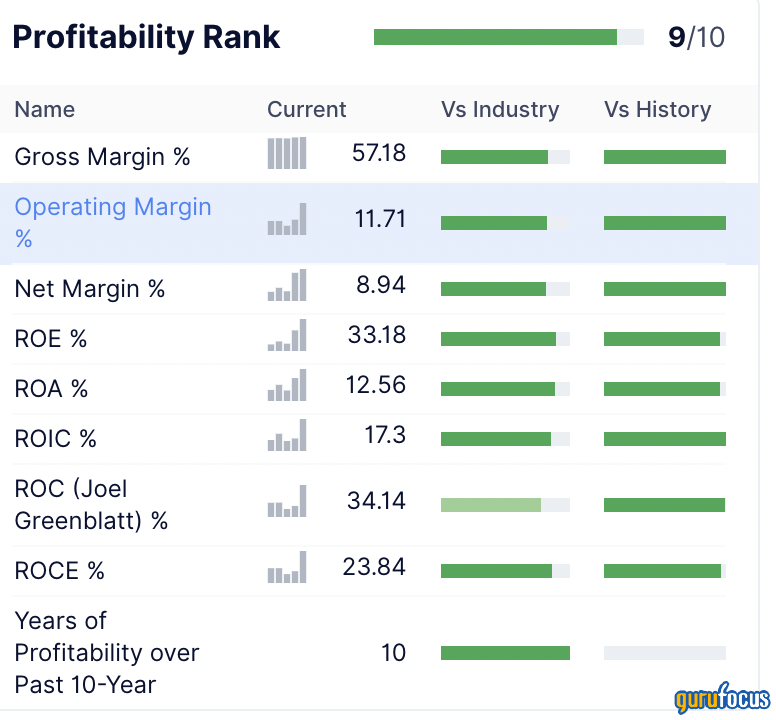 First, the operating margin for 2021 was excellent at 11.70%, but for most of the past decade it was in mid-single digits. 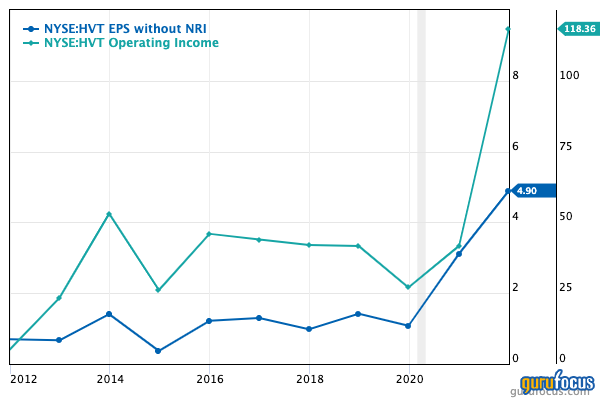 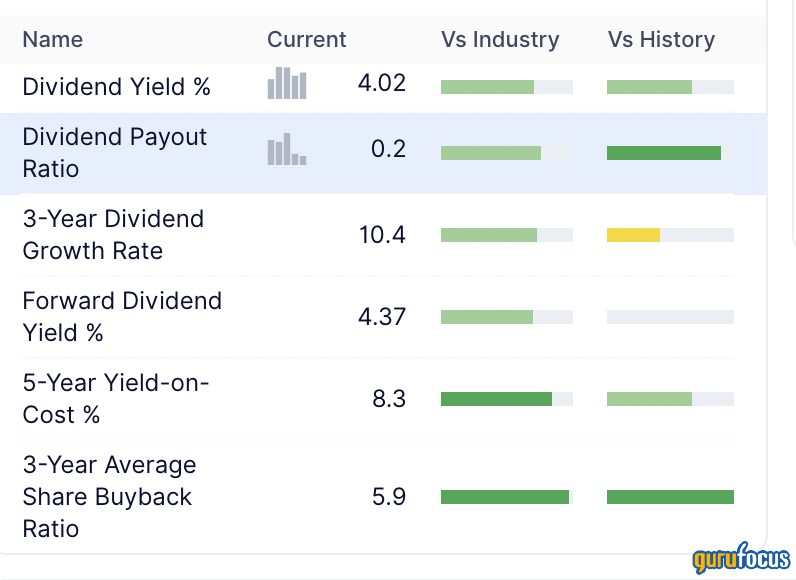 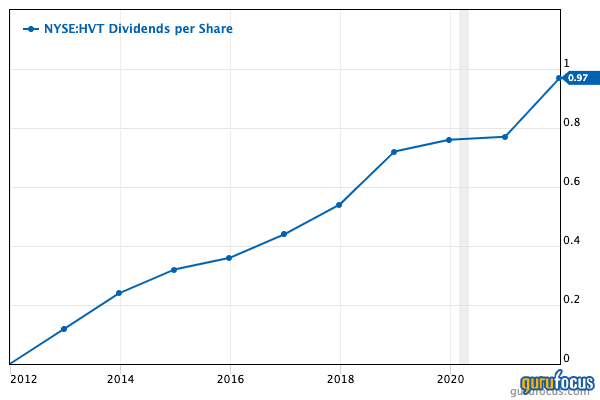 Shareholders have also seen modest gains from share repurchases averaging 1.93% per year over the past decade. 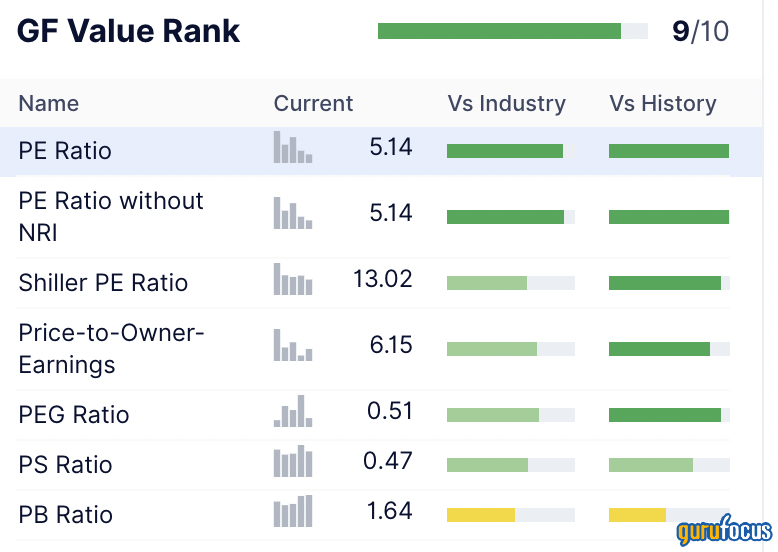 The share price has whipsawed Haverty investors many times. When we add in the trendline, it appears it has returned to the mean: 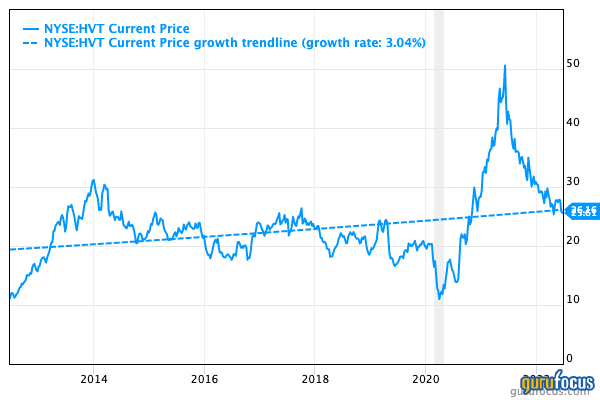 Its price-earnings ratio is low at 5.14, roughly one-third of the industry median of 15.26. According to GuruFocus, it is cheaper than 91.13% of the 778 companies in the retail cyclical industry.

The five-year Ebitda growth rate comes in at 10.00% per year, and that leads to a PEG ratio of 0.51, which indicates the share price is undervalued.

According to the GF Value chart, the stock is modestly undervalued: 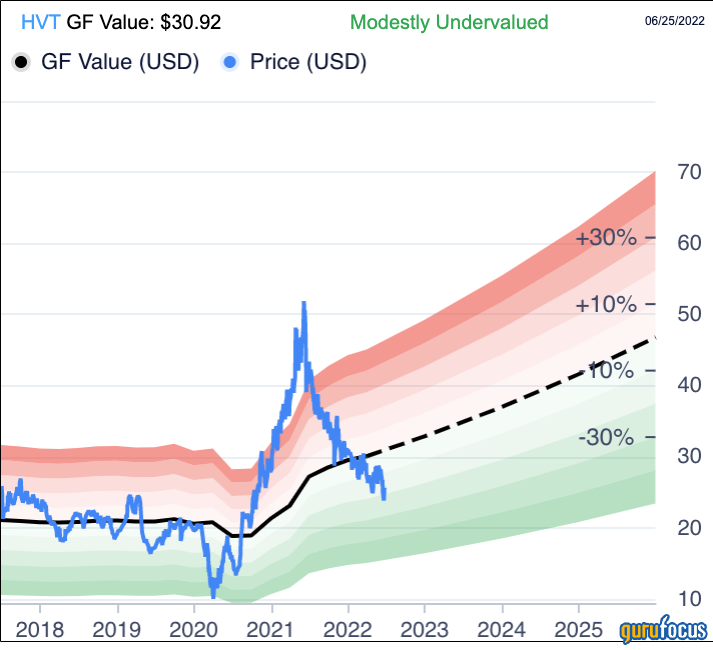 Haverty has a business predictability rating of 3.5 out of 5, so the discounted cash flow (DCF) calculator may be helpful as well. I ran the GuruFocus DCF calculator for the stock using the below assumptions: 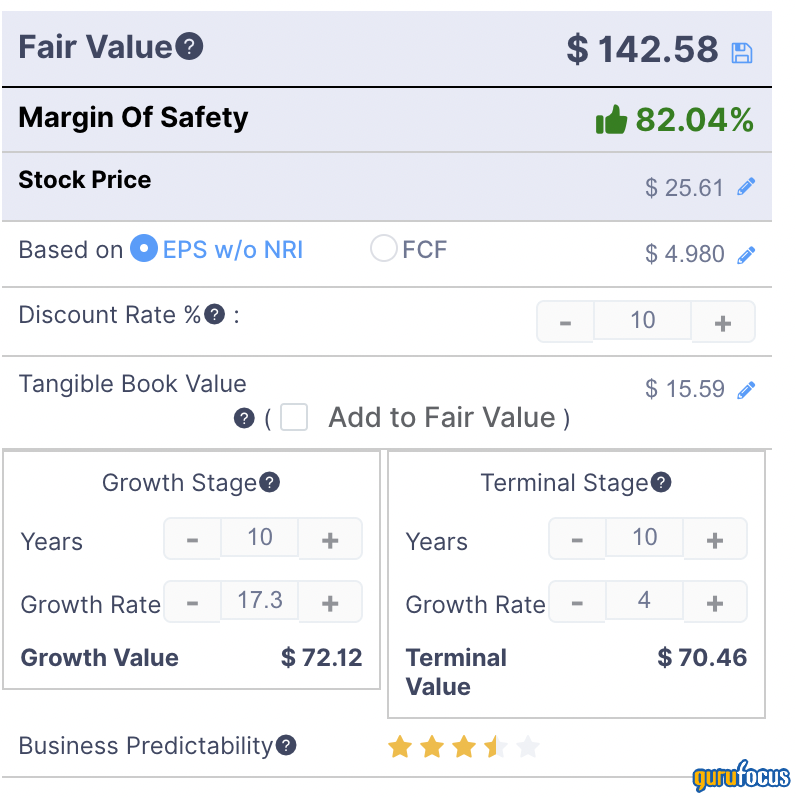 These assumptions include a 17.30% annual growth rate in the growth stage. As you’ll recall from the EPS chart shown above, this measure spiked in 2020 and 2021. Cautious investors should assume this accelerated growth will not continue. 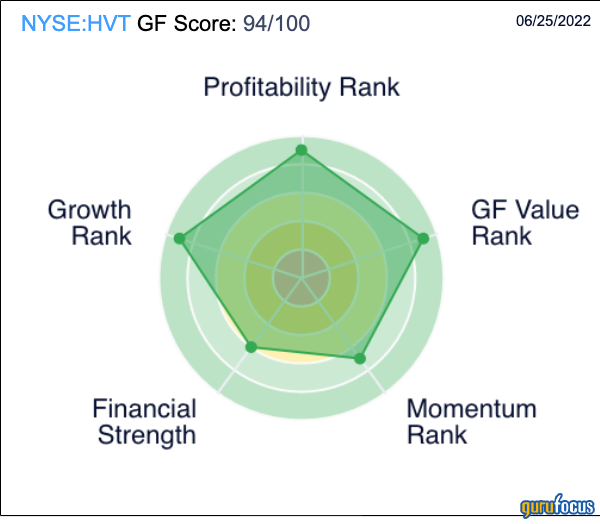 Five gurus had stakes in Haverty at the end of the first quarter, and the following three held the largest positions:

Haverty Furniture Companies deserves a look from investors shopping for small-cap value stocks, in my opinion - especially those investors who want an undervalued stock with good fundamentals that pays a better-than-average dividend. However, with the current potential for a recession, investors may want to consider how Haverty would fare if the economy slowed down.