Is Dollar General a Potential Opportunity?

Ubiquitous in rural areas, the discount retailer may grow in a recession

Times are never hard for everyone at the same time. While recession fears are growing, understand that belt-tightening for some can boost business for others.

DG, Financial), for instance. The Goodlettsville, Tennessee-based company is one of the country’s largest discount retailers. The company has a selection of name-brand items and private labels with most priced at $10 or less.

Dollar General locations usually cover about 7,000 square feet, so its selection is more limited than in a Target (

For those in rural areas and small towns, Dollar General can be one of the few places in town for buying food, housewares and personal care items. With more than 17,000 stores in 46 states, Dollar General has locations in spots where the larger discount retailers will not locate, which is their niche.

With fears for recession high, Dollar General could be a value stock choice that should not get hit hard during a downturn. Consumers hit with inflation may put off some purchases, but they will likely continue go to a Dollar General for necessities and might even try them for the first time.

Dollar General’s earnings per share have been growing at an 18% a year pace for the past five years. Over the past year, while the S&P 500 has been falling, Dollar General shares have gained more than 15%. That is enough for analysts to rate the stock as a buy or a moderate buy, and it is trading at $245.58. 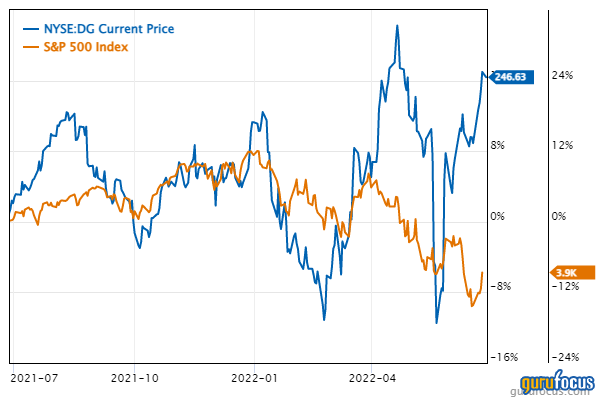 Its price-earnings ratio is 25.42, though, which is worse than 70.48% of 227 retail companies for defensive investments. However, its three-year revenue growth rate is better than 63.4% of companies in its industry.

Dollar General's performance is outpacing companies such as Target and Walmart in the retail defensive sector year over year. Its handling of Covid-19's impacts in 2020 put it in a nimbler position to expand. Since then, more than 1,000 new locations have opened.

Among the owners of Dollar General are KKR Fund Holdings (10%) and Goldman Sachs & Co. (10%). The stock was a buy for investing guru

Tom Gayner (Trades, Portfolio), who picked up 56,000 shares during the first quarter.

With a GF score of 90 out of 100, Dollar General ranks highest in growth and profitability. While the U.S. is not in a recession, inflation has consumers looking for deals. Keep in mind, though, that retail has supply chain challenges and inflation pressure that may trim their profit margins unless they pass those costs off to consumers.

Among defensive stocks that can hedge against bear market losses, Dollar General is one to consider.