Citigroup is the most undervalued of the big 4 U.S. banks

Ben Alaimo
Jun 28, 2022
Bookmark
Summary
Warren Buffett (Trades, Portfolio) has always been a fan of banks and has had sizable investments into many large U.S. banks for decades. These include Bank of America (BAC, Financial), US Bancorp (USB, Financial), Wells Fargo (WFC, Financial) (now sold out) and even Brazilian fintech NU holdings (NU, Financial).

Some of my favorite Buffett quotes about banks go as follows:

"Banking is a very good business unless you do dumb things. You get your money extraordinarily cheap and you don't have to do dumb things. But periodically banks do it, and they do it as a flock, like international loans in the 80s."

"The banks we own earn between 12% and 16% or so on net tangible assets. That’s a good business, that’s a fantastic business against the long-term bond at 2%."

Considering his investment history, it’s fair to say Buffett knows a thing or two about banks. Thus, it came as no surprise to investers when Buffett's Berkshire Hathaway (BRK.A)(BRK.B) bought $3.4 billion worth of shares of Citigroup (

Since then, the stock has continued to slide down by approximately 22% from the first quarter's average price, and thus it’s now substantially cheaper than what Buffett paid. Since we have the rare opportunity to pick up shares at a lower price than what Buffett bought them at, let's take a look at Citigroup in detail to see why Buffett might like this bank in particular. 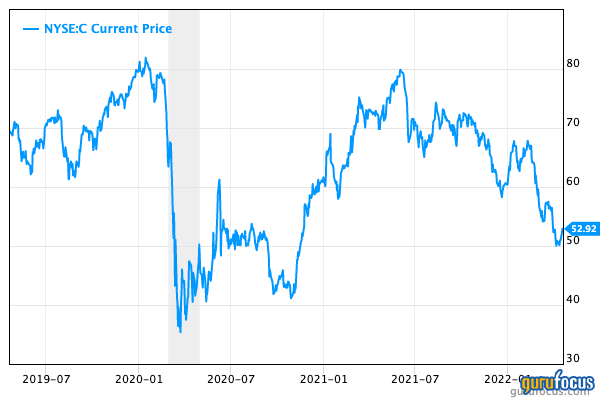 C, Financial) was formed in 1998 with the merger of Citicorp and Travelers Group inc. The bank became a titan of the U.S. economy before being butchered during the financial crisis. It was one of the banks that had to be bailed out by the U.S. government. Today a much smaller business thanks to permanent damage from the Great Recession, Citigroup had a boost during 2020 thanks to monetary stimulus before weakening again.

Citigroup's most recent earnings report was for the first quarter of 2022. The company saw revenue decline by 2% compared to the prior-year period due to lower non-interest revenue across the business. However, its wealth management business, which was recently combined into a single platform, saw an increase in assets and advisors. The company’s investment revenues saw a decline due to geopolitical tensions and market declines, but underlying growth remains strong with average deposits up 14%, loans up 5%, assets up 4% and advisors up 6%.

The company reported $5.4 billion in direct exposure to Russian assets, which is more than most other U.S. banks, as Citigroup operates branches and offices in both Russia and Ukraine. However, the good news is that out of Citigroup's $2.3 trillion in assets, Russian exposure is less than 0.5%. 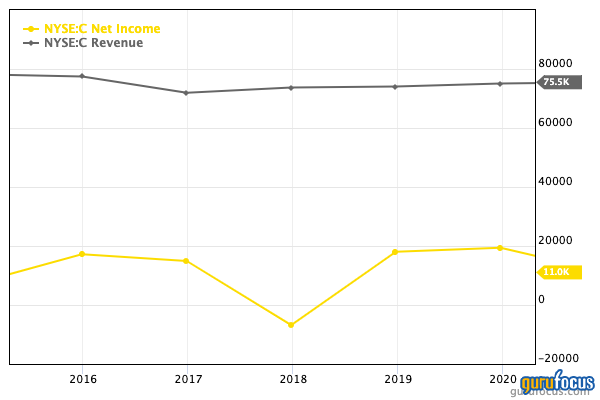 Overall, net income for the quarter decreased by 43% to $4.3 billion due to higher expenses, cost of credit and lower revenues. Positive news came from the Treasury and Trade Solutions business, which saw fee growth and higher rates helps trade loans. This led to an 18% year-over-year revenue growth. Securities services also did well with revenue up by 6%.

I will now compare Citigroup with the other big four U.S. banks - namely Wells Fargo ( 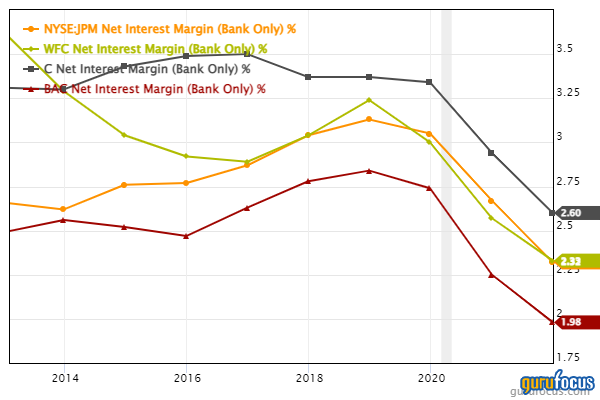 Citigroup has one of the lowest returns on equity at less than 10%. However, they did report an ROE of 9% in the first quarter, which was better than the prior quarter. 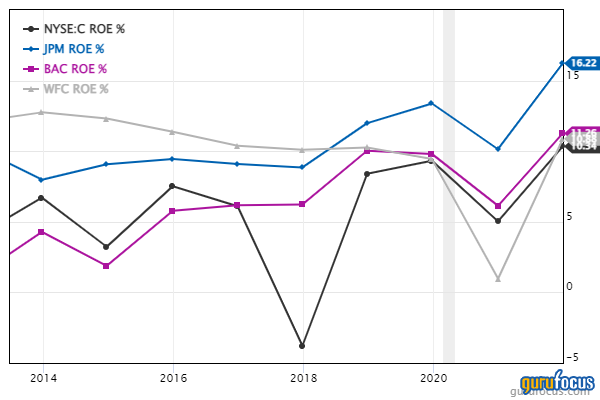 Citigroup is the most undervalued of the big four U.S. banks in terms of the price-to-tangible-book-value ratio, which is just 0.60. 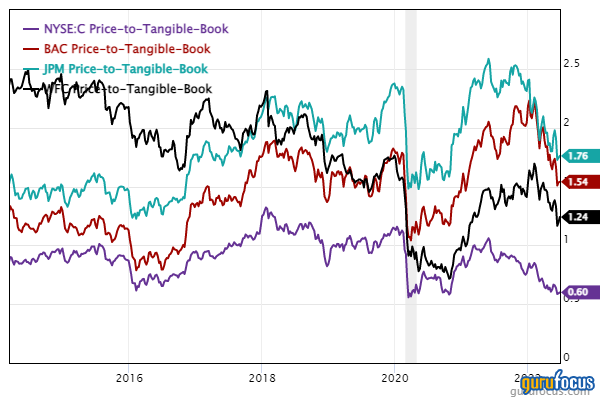 Overall, Citigroup tends to have a lower return on average tangible common equity (ROTCE) than peers at 10%, but it plans to increase this metric to the 11% to 12% range in the next three to five years. The company is the most undervalued of the big four U.S. banks on a price-to-tangible-book-value ratio, but its international exposure does add extra risk to the company.