Energy is the lone sector in the market that is in the green so far this year. This is the case even as the last month has seen the sector fall almost 11% as the price of oil continues to fluctuate.

The recalibration of the energy sector has brought the share prices of many oil and gas companies lower. Many energy stocks are now trading closer to their intrinsic value, which could make them more attractive investment options for those who had been waiting for a pullback.

One energy name that has pulled back that looks appealing is EOG Resources Inc. (

EOG Resources explores and produces crude oil and natural gas in the U.S. and Canada. The company also has an offshore facility in Trinidad and operations in China. The company was founded in 1999 following a separation from Enron. The company is valued at $67 billion and generates annual revenue of close to $19 billion.

The Houston-based company last reported earnings results on May 5. Revenue for the first quarter of 2022 grew 8% to $3.98 billion, but was $1.64 billion less than Wall Street analysts had anticipated. Adjusted earnings per share of $4 stood in stark contrast to $1.62 in the prior year and topped estimates by 31 cents.

EOG benefited from considerably higher energy prices. For example, crude oil, which accounts for almost 80% of revenue, averaged $94.38 per barrel during the quarter, compared to $57.80 in the previous year. The company experienced lower costs in its wells. Coupled with higher production, this led to a new quarterly record for net income.

Like many in the oil and gas industry, EOG Resources’ revenue and profits ebb and flow with the changes in energy prices. Consistent growth over the long term has been lacking. However, the company’s earnings per share had a compound annual growth rate of 13.1% over the last decade, according to Value Line.

Revenue growth has been lower than earnings growth over the last 10 years, but much more consistent and with fewer year-over-year declines. The CAGR for the top line was 6.6% for the 2012 to 2021 period.

According to Yahoo, analysts expect EOG Resources will earn $17.05 per share this fiscal year, nearly doubling what the company earned last year.

EOG Resources compares fairly well on a number of metrics against its competitors in the oil and gas industry. 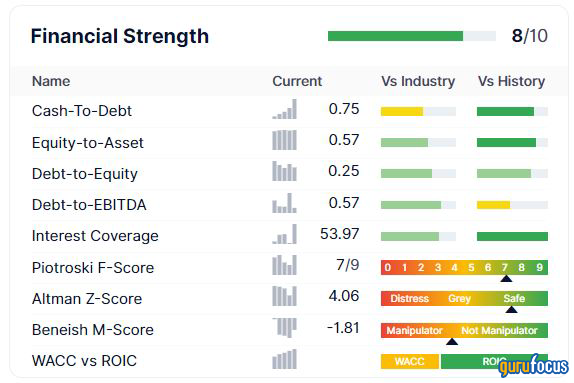 In terms of financial strength, EOG Resources receives an 8 out of 10 rank from GuruFocus. The company’s cash-to-debt ratio is its weakest area here, but the current score comes very close to its high for the past decade. Most other areas see the company score better than the majority of its peer group. Equity-to-asset and interest coverage outdistances most peers in addition to be close to the company’s best scores for the last 10 years. The Altman Z-Score and Piotroski F-Score reflect the company’s financial stability as well. 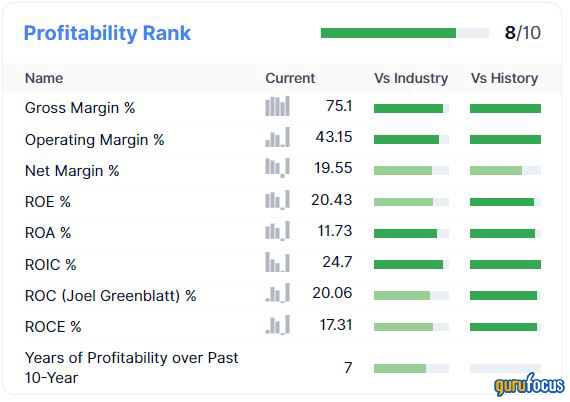 On profitability, EOG Resources also scores an 8 out of 10. Every metric is ahead of the industry and close to the top end of the company’s 10-year performance. Gross margin, better than 92% of peers, and operating margin, ahead of 86% of the industry, show that EOG Resources is extremely effective at extracting profit from its business.

The high performance on return on equity, return on assets and return on invested capital provide further evidence that EOG Resources smartly uses capital to grow its bottom line. 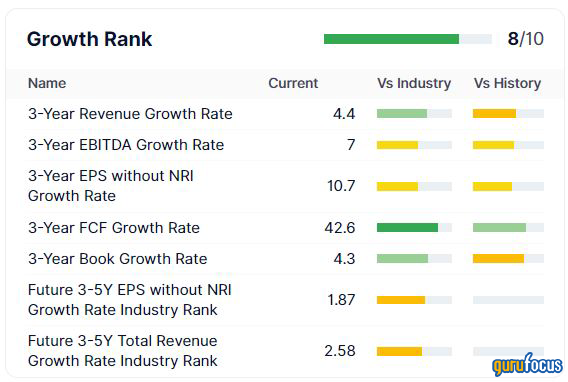 On growth, EOG Resources again scores an 8 out of 10. The company’s best score here comes in the three-year free cash flow growth rate, which tops 82% of the competition. It is also above the midpoint for the last decade for the company. Three-year revenue growth rate is ahead of nearly two-thirds of the oil and gas industry.

Where an investor might have some concern is growth in future revenue and earnings per share without nonrecurring items, which are below 60% and 65% of peers. 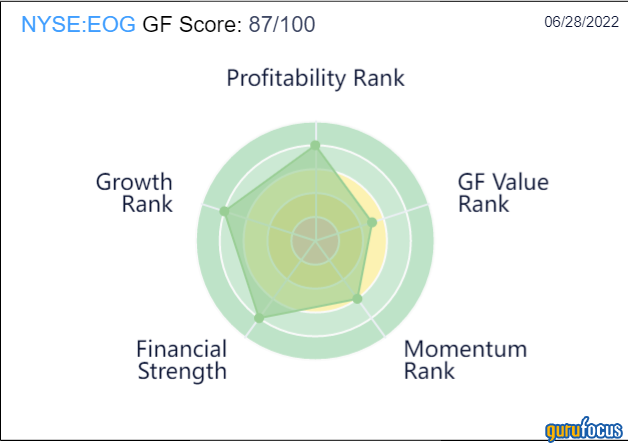 Overall, EOG Resources receives a solid 87 out of 100 GF Score.

Much like its earnings history, EOG Resources’ dividend growth has been inconsistent. The company has not cut its dividend, but there have been pauses previously, including the 2015 to 2017 period. This coincided with the collapse of energy prices in the middle of the last decade, but being able to maintain its dividend during a difficult period for the energy sector should be taken as a positive sign.

EOG Resources has increased its dividend for the last five years. Even with the pause, the dividend has a CAGR of 22% not including special dividends. Raises have become much more aggressive, including the 82% dividend increase that shareholders received for the first payment of 2022.

As long as free cash flow remains high, investors should get used to seeing future special dividends as well. That is because the company’s board announced a new capital allocation plan. EOG Resources will disbtubuted 60% of free cash flow to shareholders in the form of dividends. For context, the company generated free cash flow of $2.4 billion last quarter.

So far this year, shareholders have seen total dividends of $5.05. Assuming just one more quarterly payment in the fall at the current rate would push the dividend total to $5.80, equating a current yield of 5.1%, which is more than three times the average yield of the S&P 500 Index.

EOG Resources’ base dividend looks to be in good shape. The company distributed base dividends of $1.99 in 2021 while earning $8.61 per share for a payout ratio of 23%. Even factoring in special dividends, the payout ratio was 58%, which is still a reasonable level.

Debt obligations do not appear to put the base dividend in jeopardy either.

The weighted average interest rate would need to reach above 52.3% for the dividend to not be covered by free cash flow.

Year to date, the stock has greatly outperformed the S&P 500 Index, rising almost 25%. Over the last month or so, the story has changed as EOG Resources has seen its share price decline 17%.

The positive of this decline is that it brings the valuation down to a level closer to fair value according to the GF Value Line. 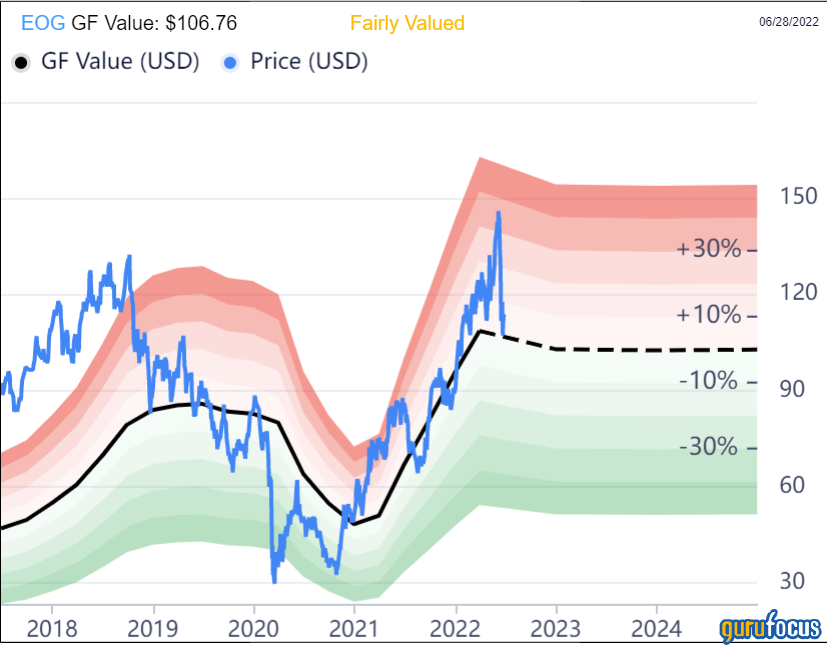 EOG Resources closed Monday’s trading session at $113.76. With a GF Value of $106.76, the company has a price-to-GF Value of 1.07. This is the close to the GF Value Line that the stock has been at since earlier this year.

Energy has been the lone sector to advance in 2022, though the last month has not been kind to many stocks in the space.

EOG Resources has followed the rest of the industry lower, but this has placed the stock closer to its GF Value. The company ranks near the top of its industry on a variety of important metrics.

Both the base and special dividends appear to be safe from a potential dividend cut, making EOG Resources’ high yield attractive.

These factors suggest the company could be a good investment option for those seeking exposure to the oil and gas industry.