Gurus Are Bulking Up on Open Text

With the share price falling, several gurus have substantially increased their holdings

OTEX, Financial), an information management software company, manages to make it onto both GuruFocus' Buffett-Munger screen and its Undervalued Predictable screen, which is a rare feat.

Moreover, several gurus have been buying shares recently, and the company plans to invest $2.2 billion in R&D over the next five years. Could this tech stock be an opportunity for the current bear market?

Open Text Corporation, which styles itself as OpenText, is based in Ontario, Canada. The company described itself as follows in its latest 10K:

“Incorporated in 1991, OpenText has grown to be a leader in providing Information Management software solutions. We offer a comprehensive line of Information Management products and services that power digital businesses of all sizes and enable them to grow faster, obtain lower operational costs and reduce information governance and security risks by improving business insight, impact and process speed. Our products are offered as software as a service (SaaS), through off-cloud solutions, on the OpenText Cloud, on third-party public clouds or as a combination.”

OpenText reported that the markets it serves are highly competitive and it faces rapid technological change, shifting customer needs and economic pressures.

It also competes in certain markets with Oracle (

ORCL, Financial) and Microsoft (MSFT, Financial), which are also its partners.

Its competitive advantages include a well-known brand, backed by industry-leading margins. It also has strategic partnerships with several major tech companies, including SAP (SAP), Alphabet's ( 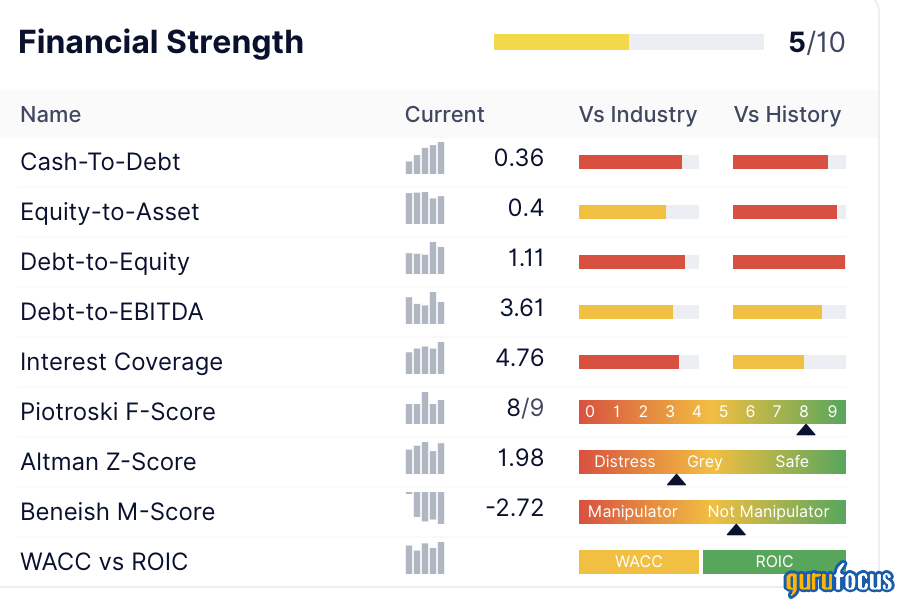 At the end of the third quarter of fiscal 2022, OpenText had cash and cash equivalents of $1.634 billion (with no marketable securities). At the same time, it had short-term debt of $10 million and long-term debt of $4.211 billion.

It generates enough operating income to pay its current interest payments more than four times over. The Altman Z-Score looks worrisome at just 1.95, yet it also has a healthy Piotroski F-Score of 8 out of 9.

The return on invested capital (ROIC) is less than one percentage point higher than the weighted average cost of capital (WACC), so while the company is creating value for shareholders for now, investors should keep an eye on this metric.

We shouldn’t worry about the sustainability of the company's growth, as it has grown its free cash flow by an average of 16% per year over the past decade: 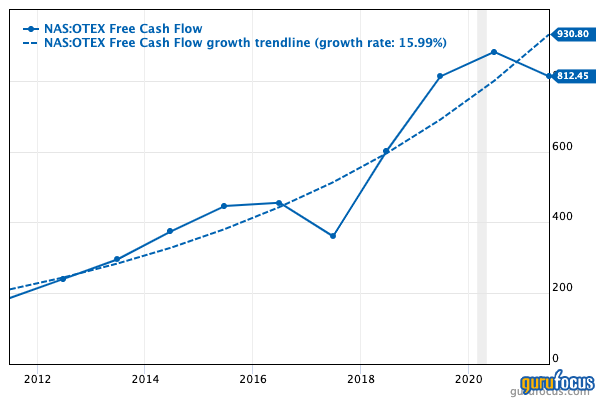 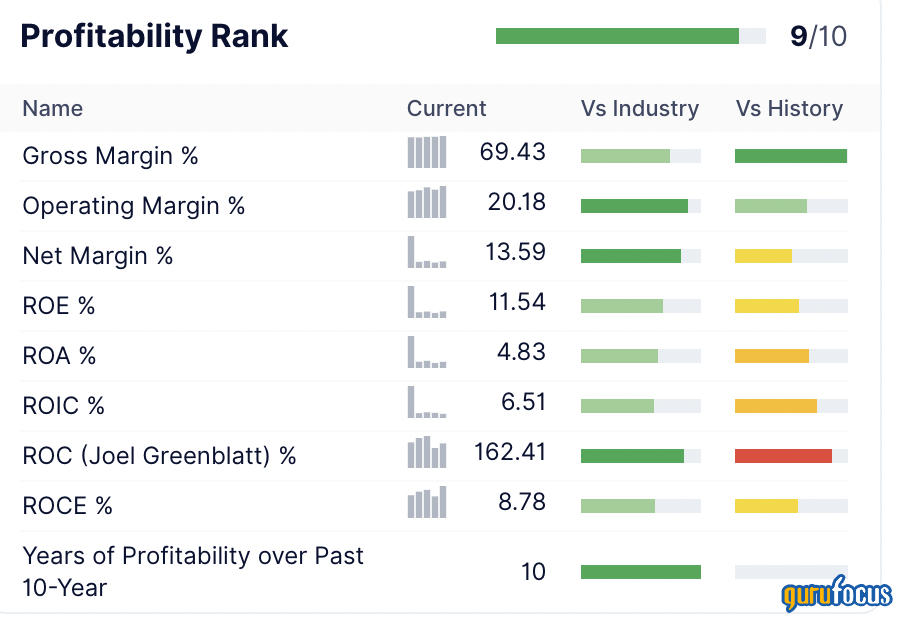 We see lots of green bars in the company's profitability chart when comparing to others in the industry, indicating above-average performance versus competitors, even though it may not be beating its own historical figures.

The net margin is in the double digits, and the company has been profitable every year for the past 10 years. 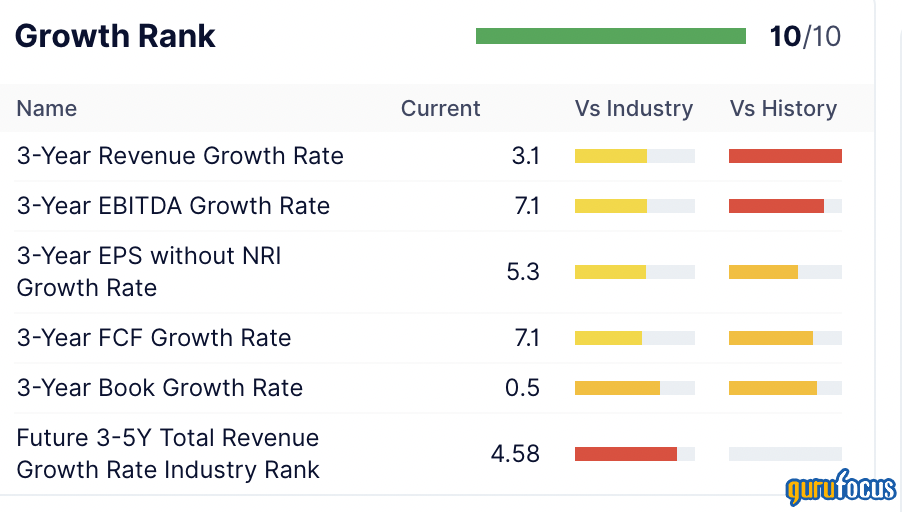 Why, you might, ask does OpenText receive a full 10 out of 10 ranking for growth when its growth chart looks mediocre? The answer lies in the composition of the ranking, which doesn't necessarily have anything to do with the other metrics in the growth chart. These are the GuruFocus criteria for the growth rank:

The company receives four out of five stars for business predictability, and its Ebitda and earnings per share without non-recurring items growth rates are both higher than its revenue growth rate.

OpenText’s dividend yield is higher than the average for S&P 500 companies at 2.33%, and higher than 62.58% of peers and competitors in the software industry.

One reason for this is that the board of directors has quite consistently raised the dividend per share every year for the past decade. Another is the price slump that has lasted about 11 months: 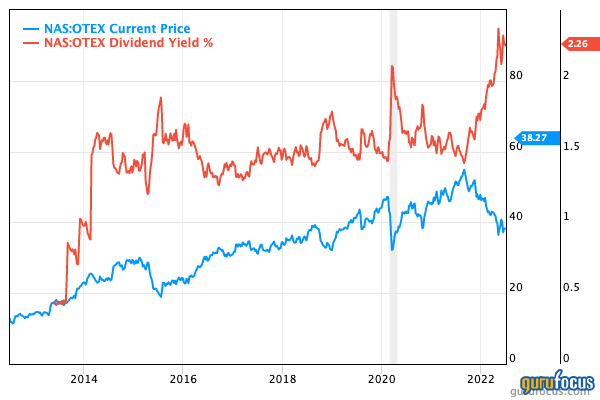 The growth of the yield has been held back by the rising share count, as the share count has grown by just over 2% per year for the past decade. 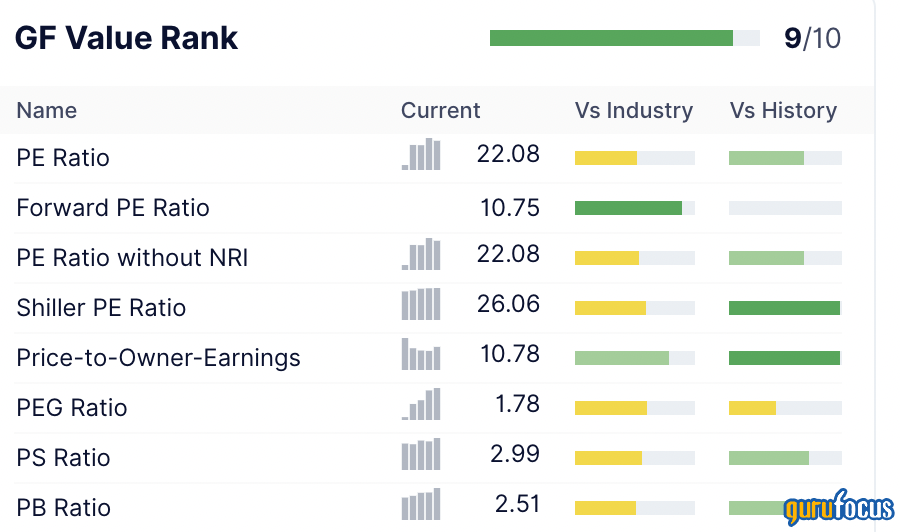 The company gets a very high ranking for valuation, even though few of its metrics are industry leading.

According to GuruFocus, “The GF Value rank is determined by the price-to-GF-Value (P/GF Value) ratio, a proprietary metric calculated based on historical multiples along with an adjustment factor based on a company's past returns and growth and future estimates of the business' performance.”

Given that Open Text makes it through both the Buffett-Munger and Undervalued Predictable screens, we might expect it to have a PEG ratio of less than 1.00. Yet, that’s not the case. It’s because the Buffett-Munger screener accepts both undervalued and fair-valued share prices. The PEG ratio of 1.8 fits within the screener’s criteria for fair valuation (anything under 1.00 is considered undervalued).

Few companies have higher GF Scores than OpenText. Its only real weak point is financial strength, and it really shines in terms of growth, GF Value and profitability, with respectable momentum. 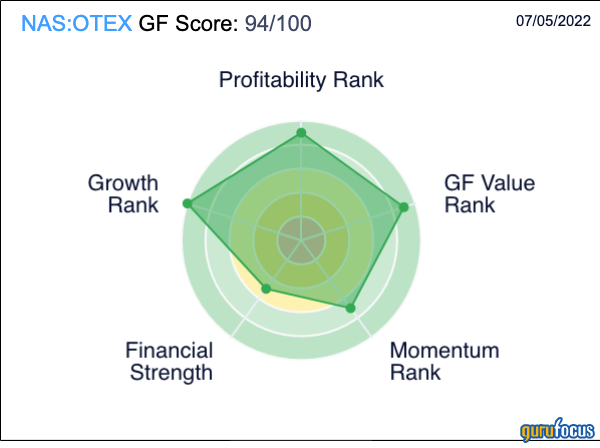 For five of the last 11 quarters, gurus have bought more shares of OpenText than they sold, and by a significant margin in some periods:

Seven gurus owned stakes in Open Text at the end of the first quarter of 2021 based on their 13F reports or mutual fund quarterly updates. The three with the largest holdings all added to their positions in that quarter:

The gurus may be on to a good thing here. OpenText continues to grow and improve its fundamentals. In particular, its profitability and growth measures are very strong. At the same time, its share price continues to drop or stagnate, setting the stage for future capital gains. It also pays an attractive dividend (for a tech stock anyway), but note that new share issuances mostly nullify the dividend raises.