The beer company is taking market share and growing revenue

Molson Coors is the fifth-largest beer company in the world with over $10 billion in revenue and currently sells beverages in over 100 countries.

In the U.S., beer is distributed through a complex three-tier system consisting of manufacturers, distributors and retailers. A national network of approximately 350 independent distributors and one company-owned distributor, Coors Distributing Company, purchases the company's products and distributes them to on and off-premise retail accounts. Coors Distributing Company distributed approximately 2% of total owned and non-owned Americans segment volume in 2021. Transportation of product to distributors in the U.S. is primarily contracted through third-party logistics providers and shipped by truckload.

Another interesting statistic is that 13% of revenue is derived from on-premise sales, which means bars and restaurants. Another 87% of revenue is derived from off-premise sales, which means grocery stores, convenience stores, liquor stores and other retail outlets. Also, beer represents roughly half of all alcohol beverage sales in North America, with wine and spirits making up the other half.

Molson Coors reported second-quarter results this week, which show constant currency revenue growth of 2.2%, with particular strength in international markets. Domestic volume sales decreased 8.2%, largely due to extraordinary items which are not expected to recur.

Cost of goods sold increased 11.5% due to higher input costs and ongoing supply chain issues that are affecting most companies in North America. As a result, gross margins declined to 23.4% from 35.7% in the prior-year period. Pre-tax income declined 22.8% to $328.1 million.

The company had $442 million in cash and equivalents on the balance sheet and $6.8 billion in total debt outstanding. The company reaffirmed its target to reduce its leverage ratio be below 3 by the end of 2022. 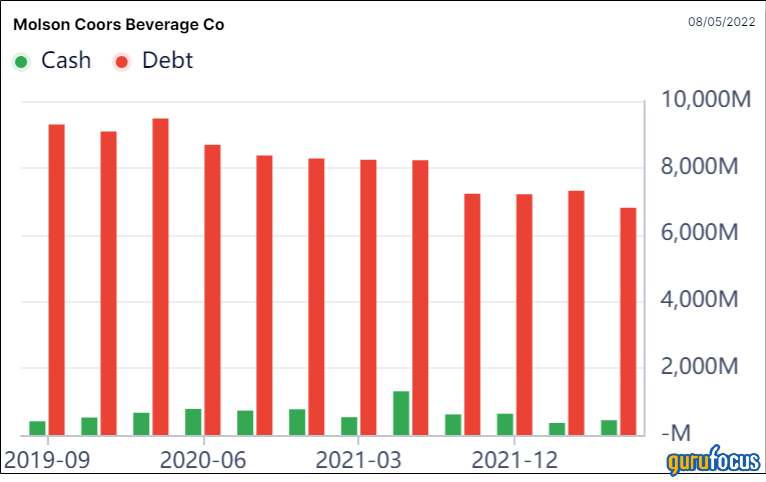 The company’s 2022 guidance called for mid-single-digit revenue growth on a constant currency basis and high-single-digit growth in pre-tax income. Free cash flow is expected to be approximately $1 billion for the year.

Analyst consensus earnings per share estimates are $3.88 for this year and $4.24 for 2023. That puts the company selling at 14 times this year's earnings and 12 times next year's estimates, which assumes a tamer inflationary environment. The company is selling at a enterprise value/Ebitda ratio of approximately 11 times based on 2022 estimates.

Using the GuruFocus discounted cash flow calculation with earnings per share of $3.88 as the starting point and 8% long-term growth creates a value of $65, or approximately 18% higher than the current price. Molson Coors pays an annualized dividend of $1.52, which equates to a dividend yield of 2.80% at this time.

Gurus who have purchased Molson Coors stock recently include

The company’s market share is increasing in core categories and brands such as Coors Light, Miller Lite and Coors Banquet. Molson Canadian is growing share of the total beer industry for the first time in eight years. The company also has the fastest-growing hard seltzer brand in the industry with Topo Chico.

Alcohol beverage companies tend to be recession proof, and in some cases even counter-cyclical, such as during the Covid-19 pandemic downturn. Molson Coors may be a solid defensive holding if the recessionary environment we are in now continues into next year.