On the same day that the new CHIPS and Science Act was signed into law, Micron Technology Inc. (

On Aug. 9, Micron said it would invest $40 billion over the next eight years to build what it called “leading-edge memory manufacturing in multiple phases” in the U.S.

Production is expected to begin during the second half of the decade, presumably starting around 2025.

According to its press release, the Boise, Idaho-based company will create up to 40,000 new domestic jobs (nearly doubling its current head count) and help ensure U.S. national security and supply chain resilience.

It would also help Micron keep up with growing demand in critical market segments, including automotive and data centers. In addition, the invsetment would help it meet demand originating with artificial intelligence and 5G networks.

The company noted this new initiative aligns with its overall financial plans and will be a key piece of the more than $150 billion it expects to invest globally in the next decade. Most of that funding will go into manufacturing and research and development.

The $40 billion investment would increase Micron’s total assets from $65.29 billion to over $100 billion, an increase of just over 61%, in eight years.

Those are ambitious plans, but does the company have the fundamentals that would make them feasible?

In its 10-K for fiscal 2021, the company described itself as “an industry leader in innovative memory and storage solutions transforming how the world uses information to enrich life for all." It continued:

"With a relentless focus on our customers, technology leadership, and manufacturing and operational excellence, Micron delivers a rich portfolio of high-performance DRAM, NAND, and NOR memory and storage products through our Micron® and Crucial® brands. Every day, the innovations that our people create fuel the data economy, enabling advances in artificial intelligence and 5G applications that unleash opportunities — from the data center to the intelligent edge and across the client and mobile user experience.”

Micron also reported it is the fourth-largest semiconductor company in the world. It has some 50,000 patents and over 43,000 employees in 17 countries.

The company operates in multiple segments:

Micron faces what it calls intense competition in the semiconductor memory and storage markets. To stay competitive, it must keep developing and implementing new products and technologies. It also has to cut its manufacturing costs.

Named competitors in the annual filing include Intel Corp. ( 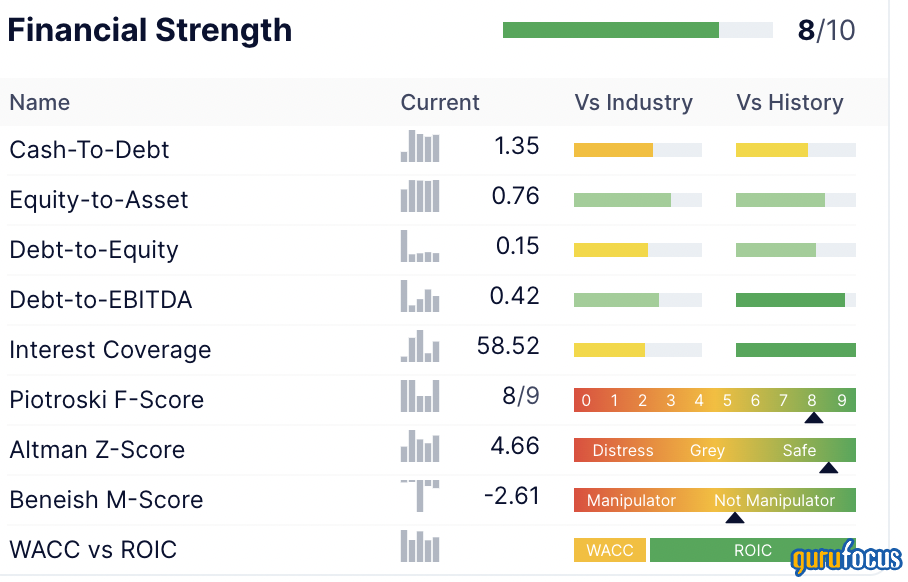 While Micron carries some debt, it is relatively light. The interest coverage ratio, the Piotroski F-Score and the Altman Z-Score all indicate a company in good financial condition.

The large gap between the weighted average cost of capital (8.02%) and the return on invested capital (21.80%) shows us the company has been creating value for its shareholders. 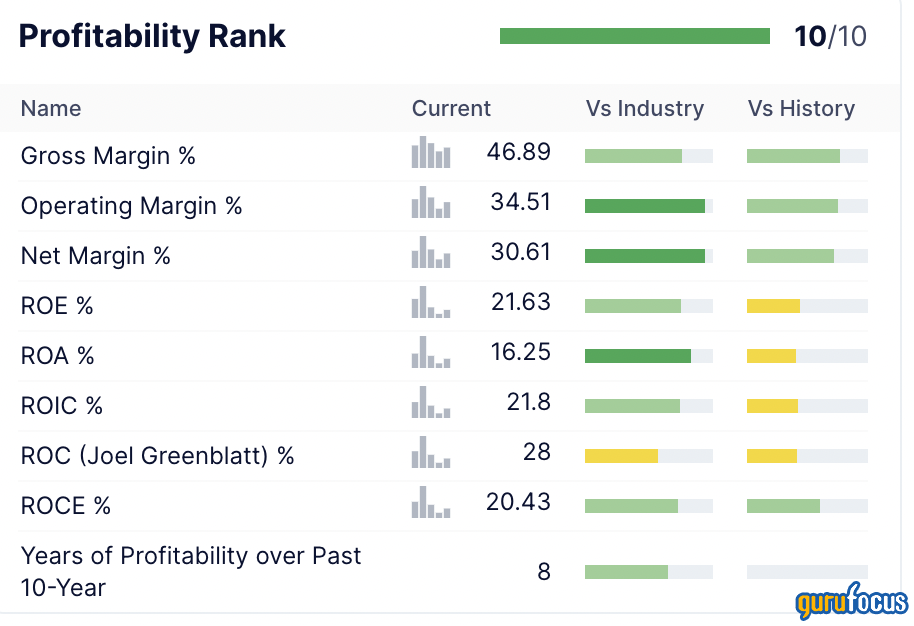 The company received top marks in the profitability category, due in part to the excellent operating and net margins. It also has an attractive return on equity, which is better than 74.81% of the 901 companies in the semiconductor industry. 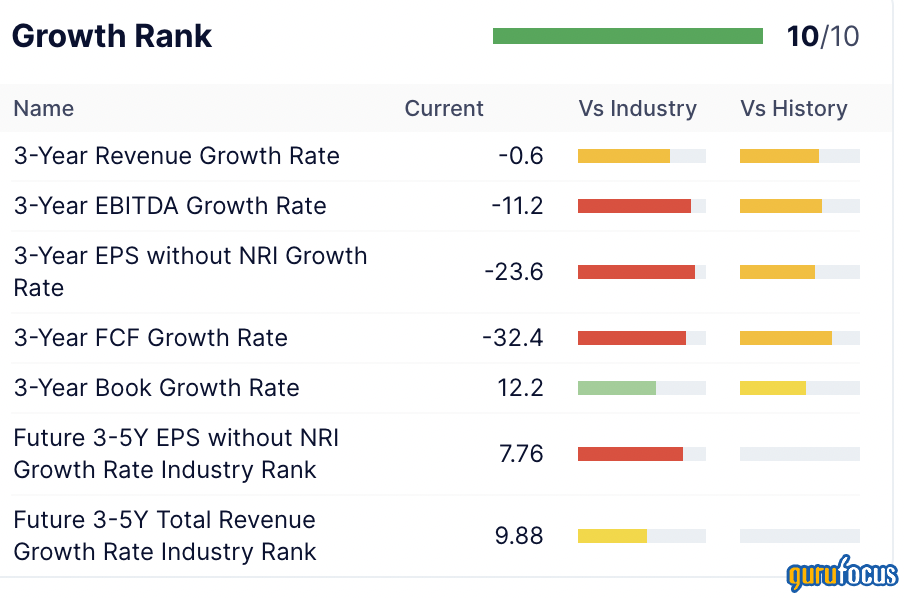 So why does Micron get a full 10 out 10 for growth when we see much more red and yellow than green?

That’s because the ranking reflects these four criteria:

When we shift from a three-year to five-year revenue growth rate, we get a much different picture, as shown in this chart: 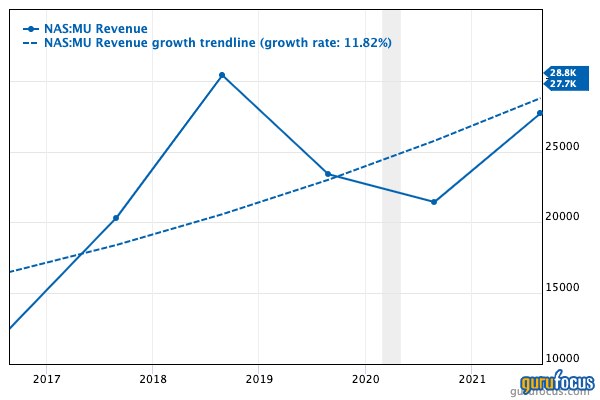 Similarly, with Ebitda growth rates, when we switch to from three years to five years we see a more positive result: 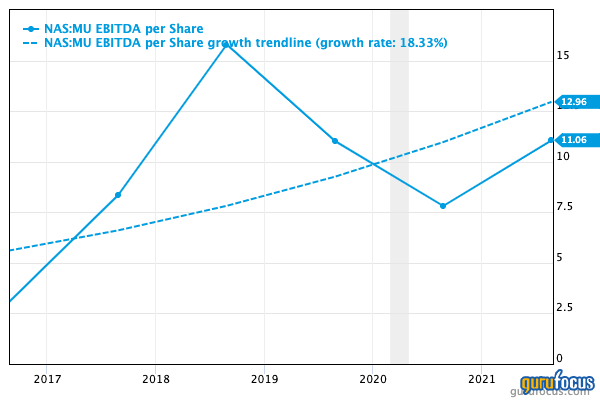 And the company has a 4.5 out of five stars predictability rating, which rounds out the criteria behind that high growth ranking.

Not included in the rating criteria is free cash flow, which will matter if the company expects to invest heavily over the next eight years. On a trailing 12-month basis, the company generated $4.82 billion in free cash flow.

Looking at its planned expansion, that is $40 billion over eight years, meaning an average of $5 billion per year. Since not all free cash flow can be applied to expansion, the company likely will need to take on some debt or issue new shares to execute the plan.

The company does not have a dividend policy tying its payments to any particular metric. Instead, it reported in the annual filing that dividend payments are at the discretion of the board of directors and the amounts would be based on criteria such as performance, capital requirements and market conditions.

Share repurchases and issuances have bounced up and down over the past decade:

So the company might issue new shares in connection with this $40 billion expansion. If a significant number of new shares go on the market, watch for the value of the stock to be diluted. 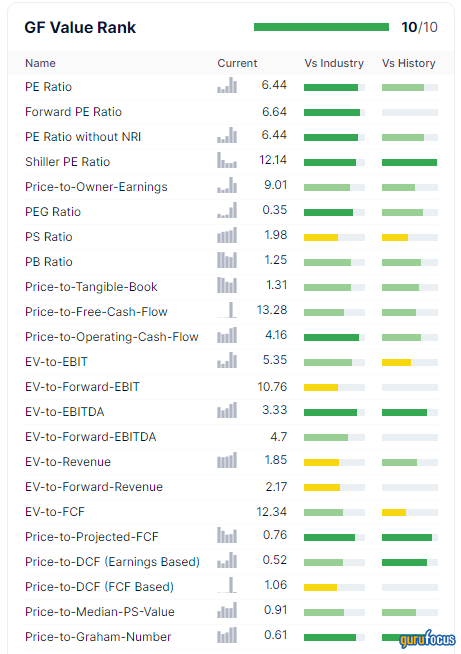 Again, the company received a full 10 out of 10 rating for GF Value. That is based on the price-to-GF Value ratio. The GF Value chart shows the stock is significantly undervalued currently based on historical ratios, past financial performance and future earnings projections. 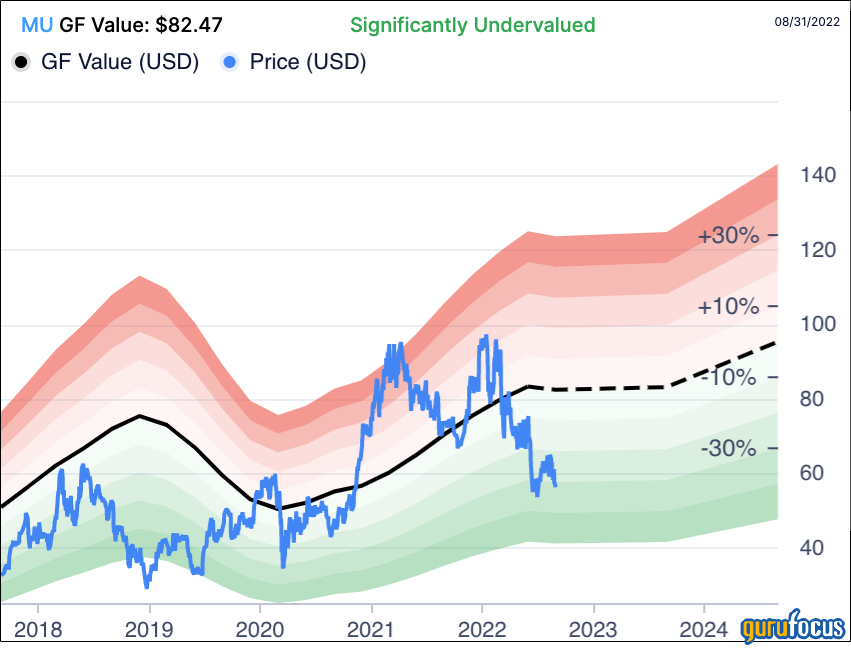 But that is not the only measure indicating Micron shares are undervalued. The price-earnings and PEG ratios both sit in value territory at 6.44 and 0.35. 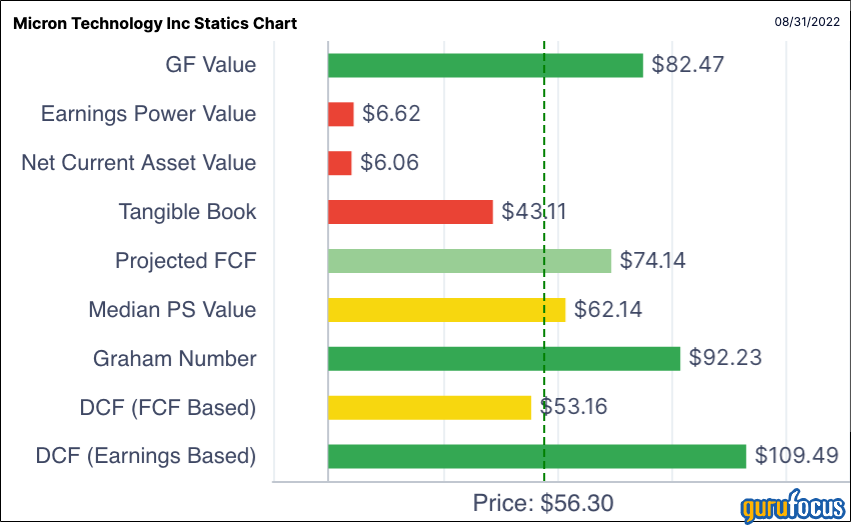 Overall, it appears safe to assume the stock is undervalued to some degree.

Micron receives a top GF Score for its fundamentals, scoring 97 out of 100. This means the company has high outperformance potential based on its strong ratings across the board. 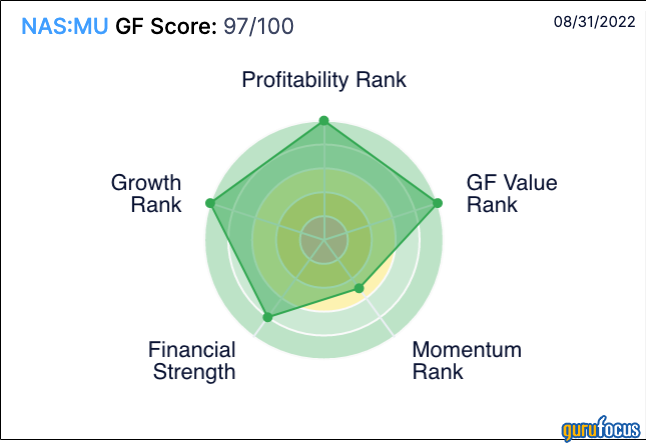 Few companies have more guru interest than Micron; 21 of them have positions. The three largest stakes at the end of the second quarter belonged to:

Let’s return to the question of whether Micron Technology has the fundamentals to pull off a $40 billion expansion over the next eight years.

The answer is yes, though it will probably need new debt or share issuances.

Given its undervalued price, this may be worth the consideration of value investors who have relaxed debt standards. Growth investors also might see an opportunity in Micron Technology if they see the share price rising in lockstep with a revenue expansion. For income investors, there is nothing worth chasing here.