Janus Henderson: About That High Dividend

I normally see too-high dividends as cause for worry, but could this be an exception?

Usually, I associate dividends above 5% with companies that are spiraling down and headed for bankruptcy. Dividends this high are normally the result of low share prices and/or the company handing out its cash because it does not know what else to do with it. Companies should ideally have a better use for their cash than just paying it all back to shareholders.

However, just from a surface look at Janus Henderson Group (

JHG, Financial), I would not get the impression that this was a company in decline, so it somes as a surprise that this company has a dividend yield of 6.38%. Could Janus Henderson be a rare high-dividend opportunity?

This company began with the founding of Henderson Group PLC in 1934. In 2017, it merged with Janus Capital Group to form Janus Henderson; the deal was called a “merger of equals."

“We focus on active fund management by investment managers with unique individual perspectives, who are free to implement their own investment views, within a strong risk management framework.”

Janus Henderson’s revenue comes from management and performance fees. The former are based on a percentage of assets under management, or AUM. The latter are bonus fees that are triggered when it meets performance hurdles or other specified criteria. 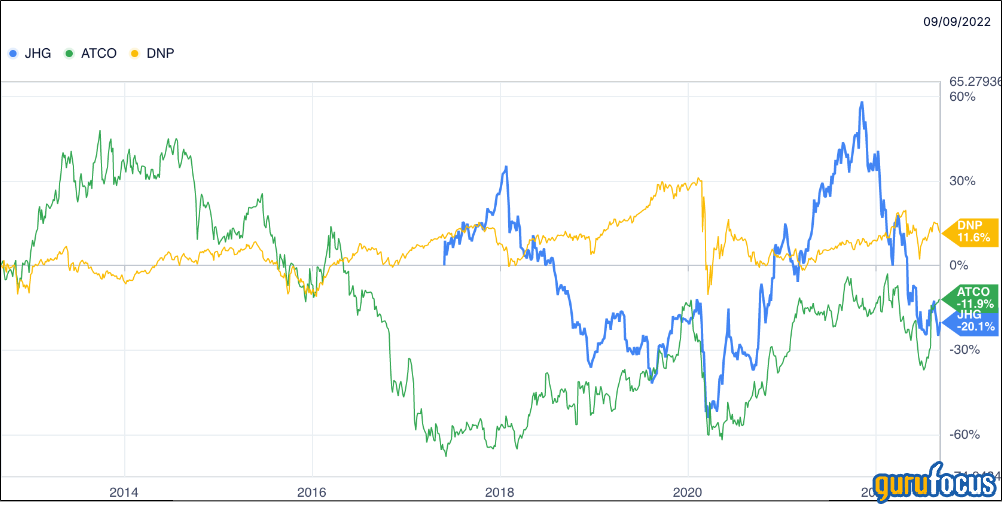 Henderson argues that its ability to compete effectively is based on turning out consistently strong investment performance, very good customer service and the development of innovative products.

Janus Henderson gets a high ranking for financial strength at 8 out of 10, based on the solid interest coverage ratio, debt-revenue ratio and Altman Z-Score. 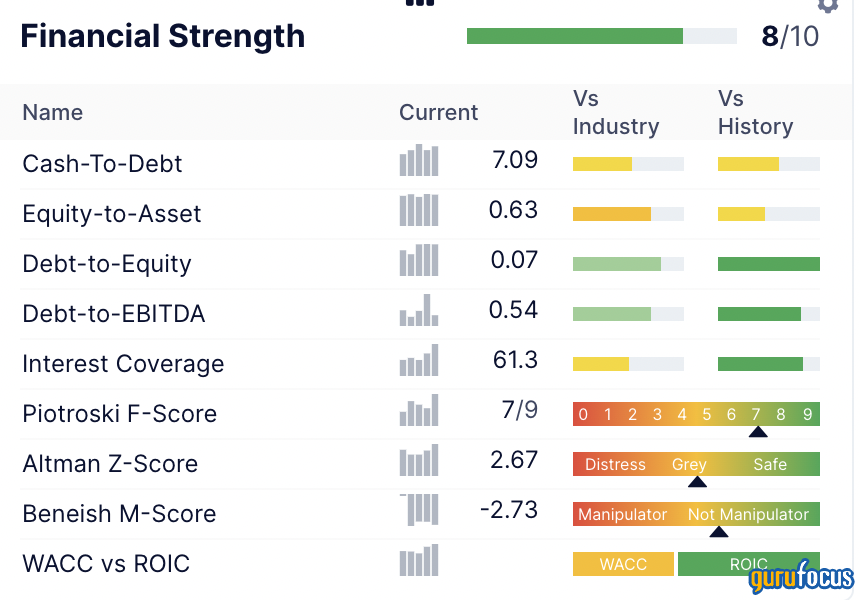 As the table above shows, Janus Henderson has a robust interest coverage ratio, meaning it has more than enough operating income to meet its interest payments.

The high Altman Z-Score means the company is not in immediate danger of bankruptcy.

The company also gets a solid profitability rating: 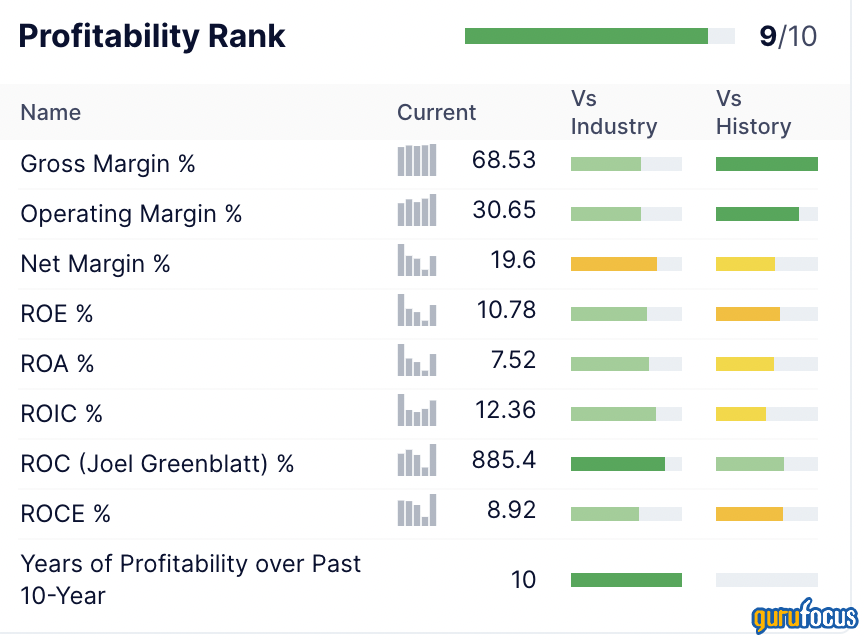 According to GuruFocus, the profitability rating is based on the following factors:

The company gets another high rank for growth, as shown in the below chart: 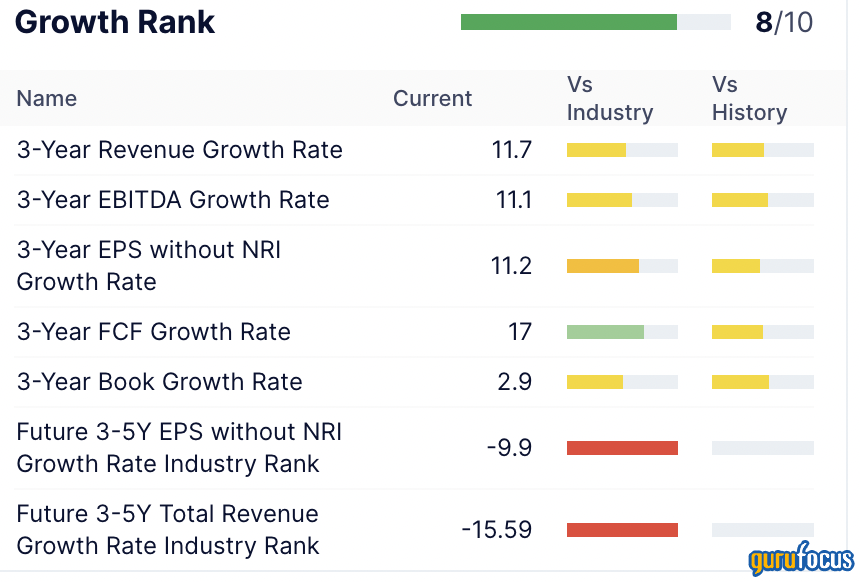 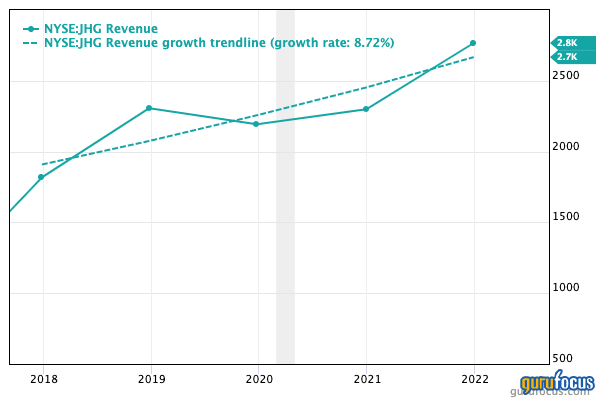 On the other hand, Ebitda growth does not impress: 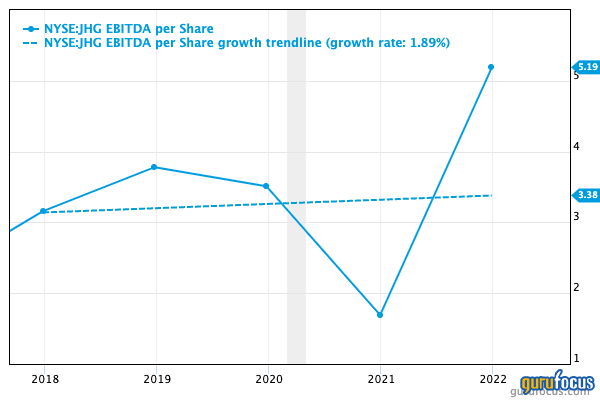 Janus Henderson does roughly meet the growth ranking criteria, but it’s far from a compelling case in my view. Besides revenue and Ebitda, the growth ranking also uses the predictability of five-year revenue growth. Earnings per share growth is shown at an average of 11.2% per year for the past three years. Unfortunately, the GuruFocus system tells us that’s actually poorer than almost 65% of all firms in the asset management industry thanks to the 2020-2021 bull market.

Free cash flow growth is more encouraging at 17% per year over the past three years. Digging a little deeper, we find a five-year rate of 16.50% and a 10-year rate of 8.80% for FCF growth.

Overall, I do not agree with the high growth ranking.

Here we get to the biggest point of contention on this stock: a dividend yield of 6.38%. Janus Henderson has a high dividend because of a deep pullback in the share price: 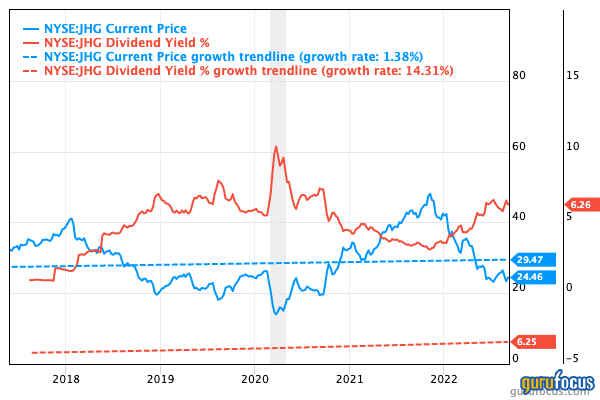 As for the dividend growth, the company started paying dividends in 2017: 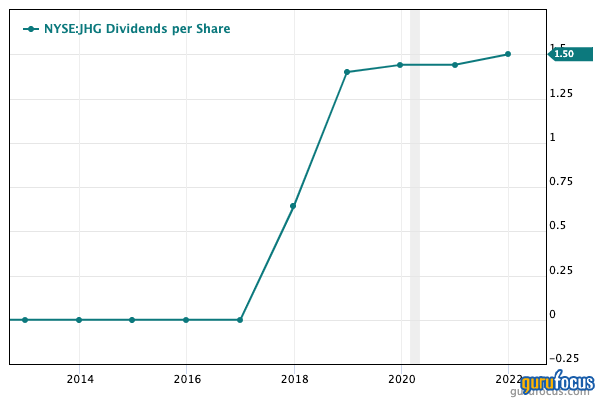 While the company quickly grew its dividends in 2018 and 2019, it was also issuing a lot of new shares. Presumably, the dilution of shares was offset to some extent by the growing dividend.

Janus Henderson gets a perfect ranking for valuation from GuruFocus. 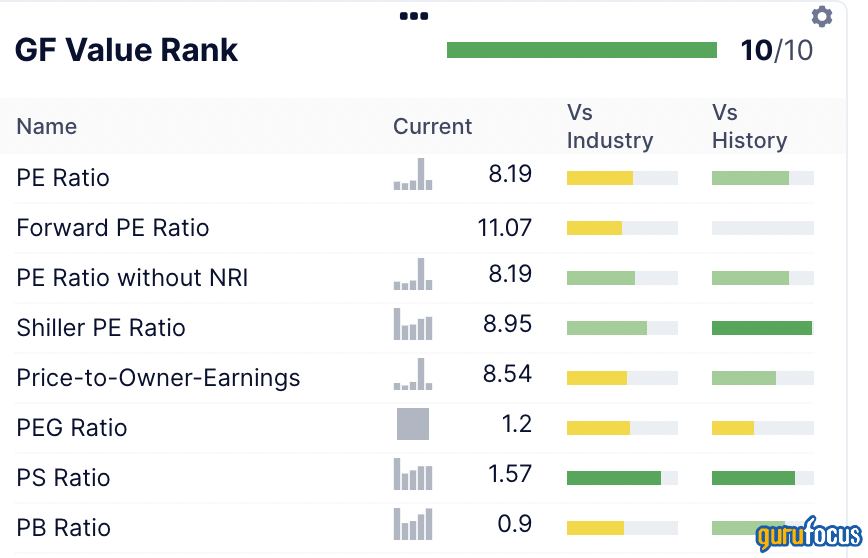 The GF Value chart rates the stock as modestly undervalued. 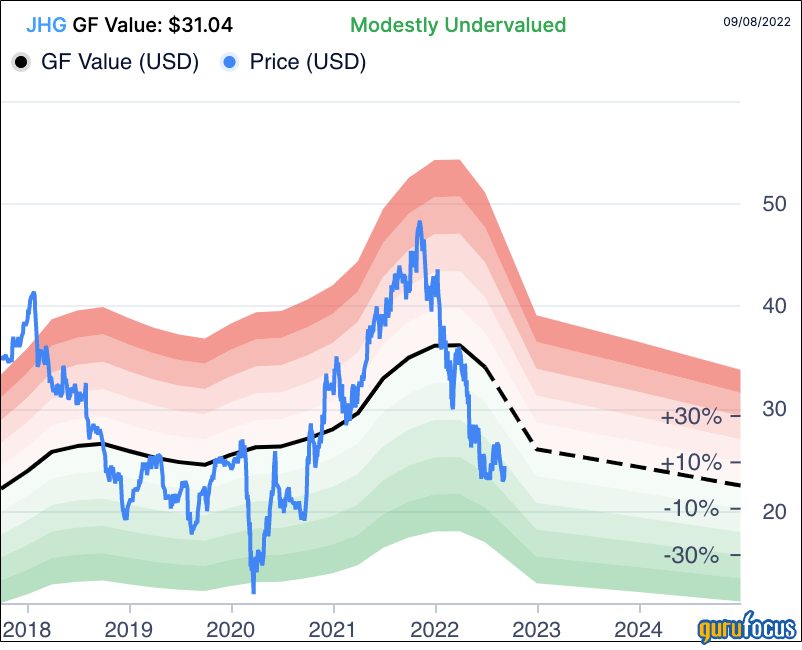 That modestly undervalued conclusion is backed up to some extent by the price-earnings ratio of 8.16, which is better than 60.10% of companies in the industry.

The PEG ratio comes in slightly above the fair value benchmark of 1.0. In part, that reflects the low five-year Ebitda growth rate of 6.80% per year.

Overall, Janus Henderson receives a very high rating for its GF Score at 92 out of 100, driven by GF Value, profitability, growth and financial strength with a weaker point coming from momentum. 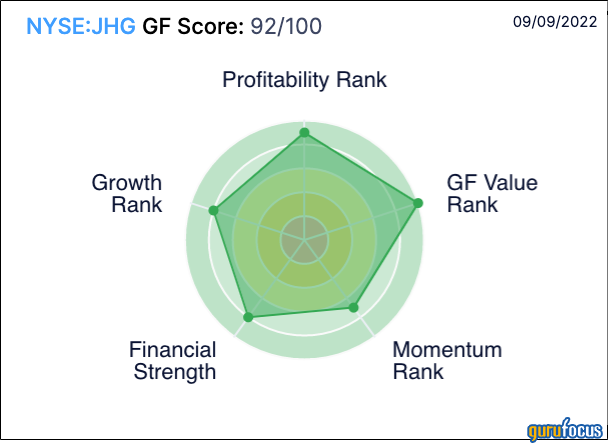 Ten of the investing gurus followed by GuruFocus hold positions in Janus Henderson, four of which have over 1 million shares. The biggest three holdings, as of the 13F reports from June 30, belonged to:

Institutional investors own 65.3% of the company’s outstanding shares, while insiders hold 13.37%. Among insiders, CEO and director Ali Dibadj has the largest stake, at 209,031 shares.

For investors looking for above-average dividends, Janus Henderson could be worth their attention in my opinion. This is a well-established, financially robust and profitable company. The stock is currently on sale, thanks mainly to the market-wide price slump that began last November. It’s not a bond equivalent by any means, but it does not look overly risky either.