Lots of strength in profitability and growth, and a value price

Looking for a steady stock that has grown its earnings per share by more than 20% annually over the past decade? One company that meets this strict criteria is Eagle Materials Inc. (

EXP, Financial), which I found using GuruFocus' Buffett-Munger Screener. Let's take a closer look at this company to see whether it could be a value opportunity.

According to its 10-K for 2022 (the company’s fiscal years end on March 31), it originated as a building materials subsidiary of Centex Corporation. In 1994, it was spun off from Centex and became Eagle Materials.

As a producer of construction commodities, it is subject to cyclical and seasonal demand. There are also variations caused by economic and geographical conditions.

Despite those ups and downs, Eagle’s earnings per share without non-recurring items has grown more than seven-fold over the past decade, with no annual per-share lossess recorded over this time period: 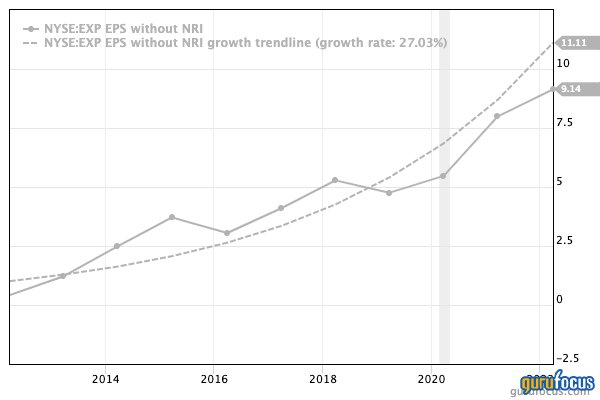 Both sides of its business deal in commodities and therefore there are low barriers to entry, with one exception. As Eagle noted, “Barriers to entry in each industry are low, except with respect to environmental permitting requirements for new aggregates production facilities and zoning of land to permit mining and extraction of aggregates.”

Being in a commodities industry means competition is based mainly on prices, which can fluctuate significantly. “Prices are often subject to material changes in response to relatively minor fluctuations in supply and demand, general economic conditions, and other market conditions beyond our control.”

The company claims it has several competitive strengths that support its profitability: 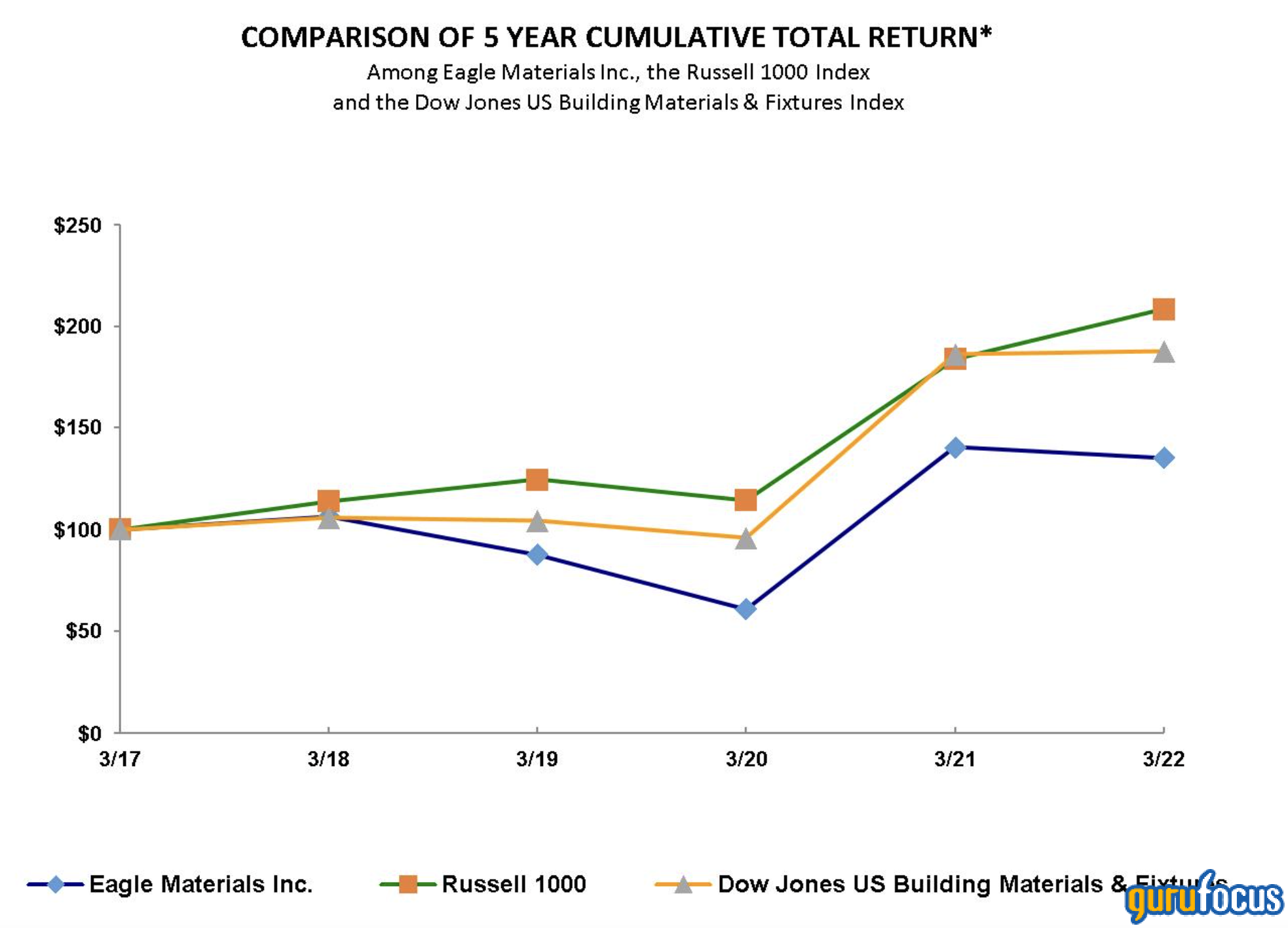 Eagle gets a financial strength score of 6 out of 10 from GuruFocus. As the interest coverage ratio indicates, the company carries some debt, but it is manageable. 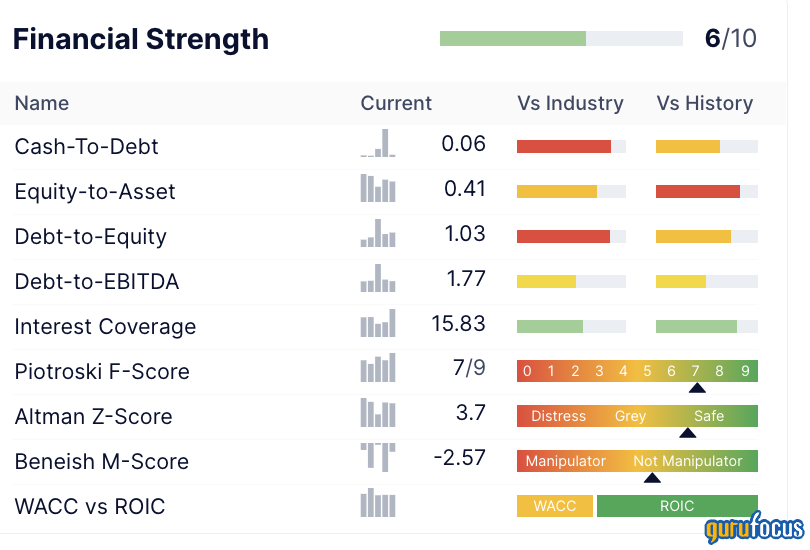 There should be little concern about debt bringing down the company, as shown by a solid Piotroski F-Score and Altman Z-Score.

In addition, the company’s return on invested capital is more than double its weighted average cost of capital, showing the company is creating value.

Almost across the board, Eagle leads the industry in measures of profitability with a GuruFocus profitability rank of 9 out of 10. The net margin is 19.72% versus the building materials industry median of 6.07%. 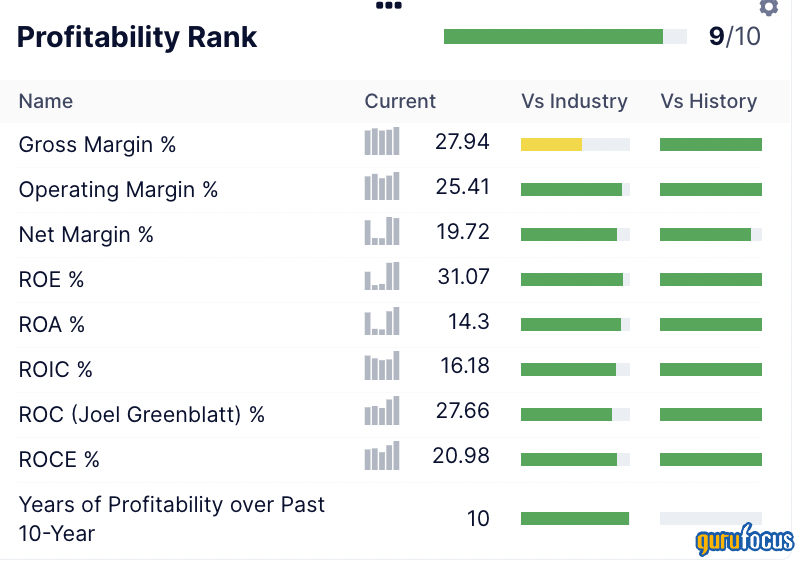 It has been profitable for each of the past 10 years, which is good for a company that sells commodities in a cyclical and seasonal industry. According to the 10-K, it offsets some of the cyclical risk by diversification across many American regions.

Eagle also can control costs to some extent because of its vertical supply chain. In its fall 2022 investor presentation, it described its capital allocation policies as follows: 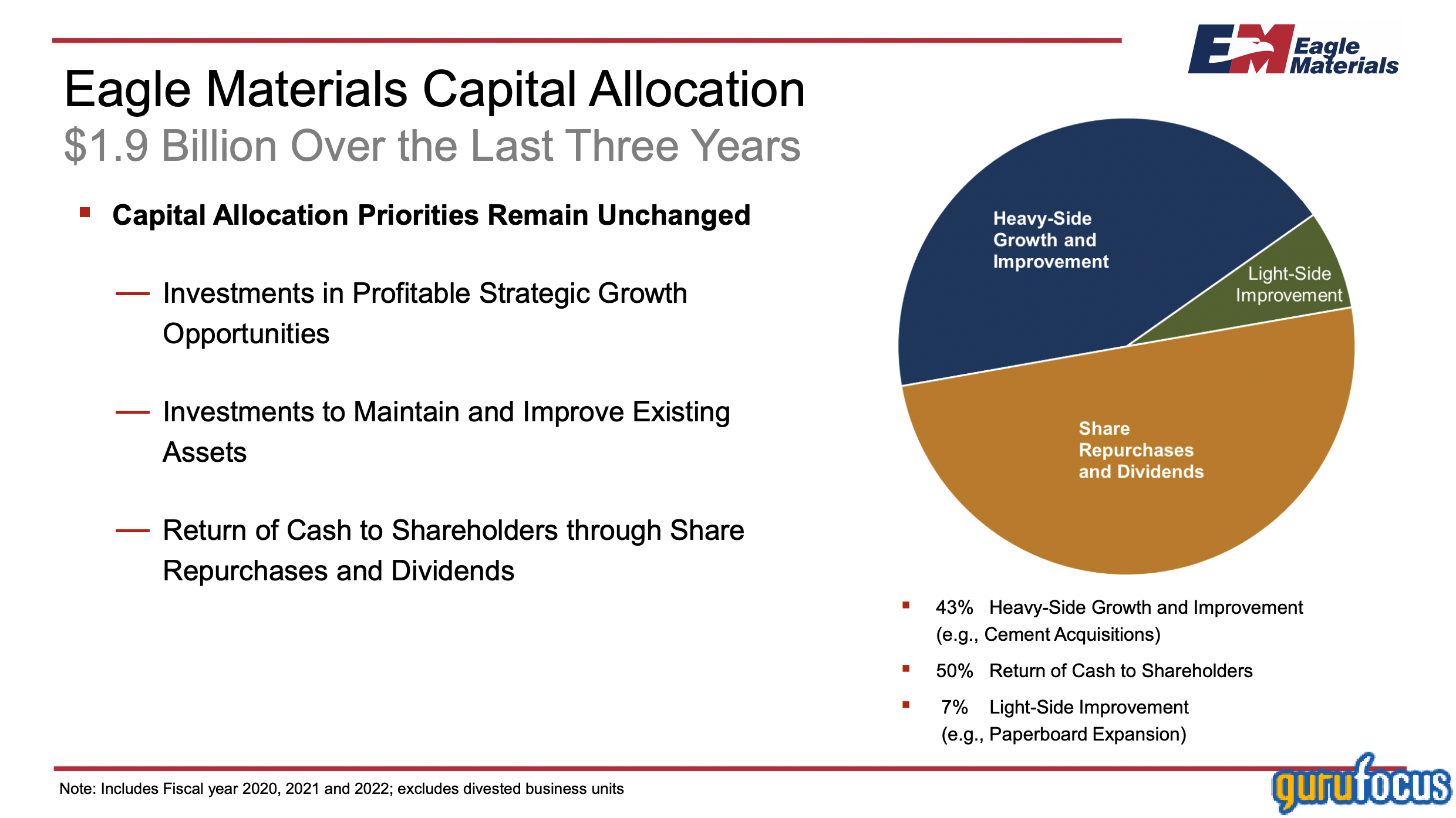 We see Eagle Materials posts industry-leading and above-average rankings for growth with a GuruFocus growth rank of 10 out of 10.

The free cash flow growth on this table indicates it has a significant amount of FCF to allocate. Half of that FCF goes to shareholders as dividends and share repurchases, while the other half is reinvested. Some of that capital goes into "strategic growth opportunities" and some goes into maintaining and improving its plants and raw material assets.

In the 10-K, the company noted, “Since 2012, we have expanded the Heavy Materials sector principally through acquisitions, with total investments of approximately $2.0 billion. These investments have more than doubled our U.S. cement capacity, making us the largest independent U.S. cement producer.”

Eagle Materials pays a dividend that offers a 0.84% dividend yield. That’s significantly lower than the rest of the industry. This metric, taken with other information we’ve reviewed, tells us the company is focused on growth.

Dividends were suspended early in the Covid-19 pandemic, but were reinstated roughly a year later (May 2021). With reinstatement, the company also hiked the dividend significantly, from $0.40 to $1.00 per share: 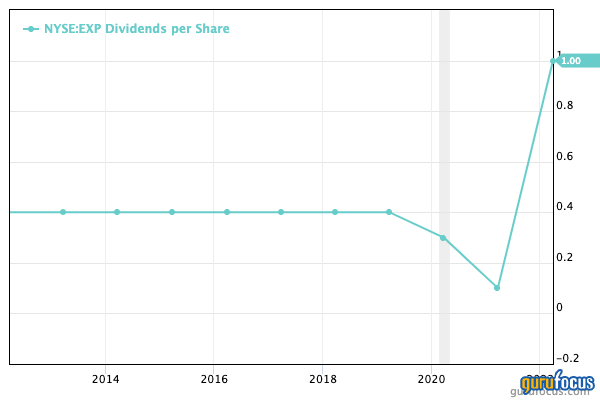 Despite the hike, the dividend payout ratio remains low, leaving lots of room for future increases, should the company decide to raise them.

All that free cash flow also allowed significant share buybacks, cutting the number of shares outstanding by about 20% over the past seven years: 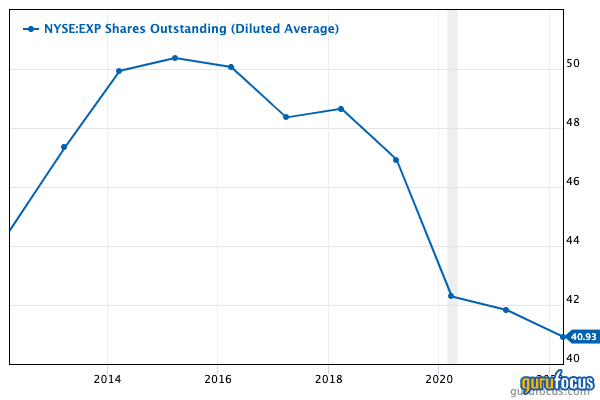 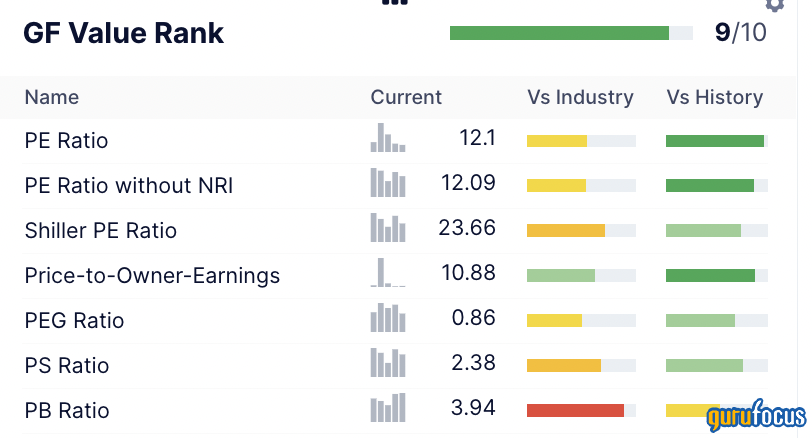 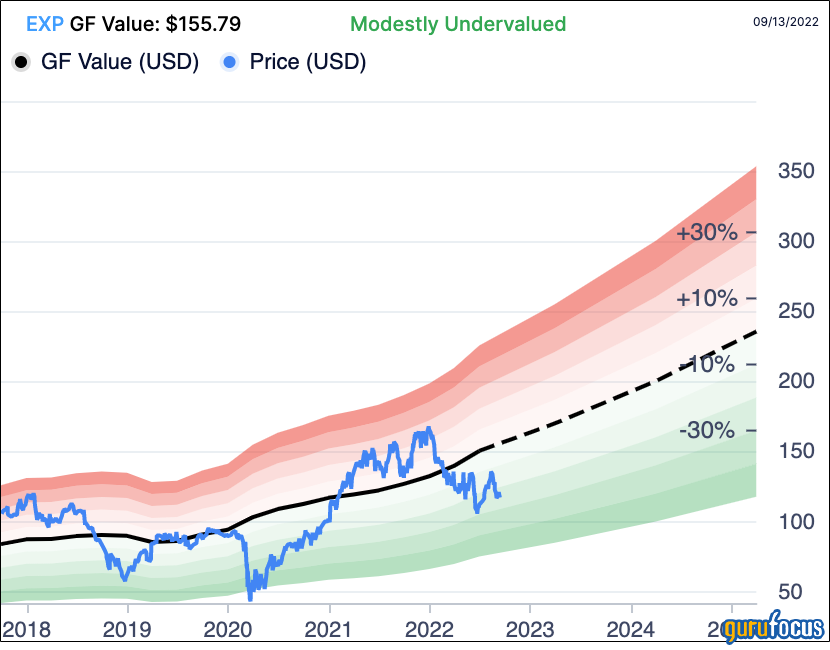 Using the GuruFocus discounted cash flow (DCF) calculator, I plugged in a 10-year EPS growth rate of 20% (that’s less than the previous 10 years’ average), and the results showed the stock as being undervalued currently.

Eagle receives one of the highest GF Scores on the market at 96 out of 100: 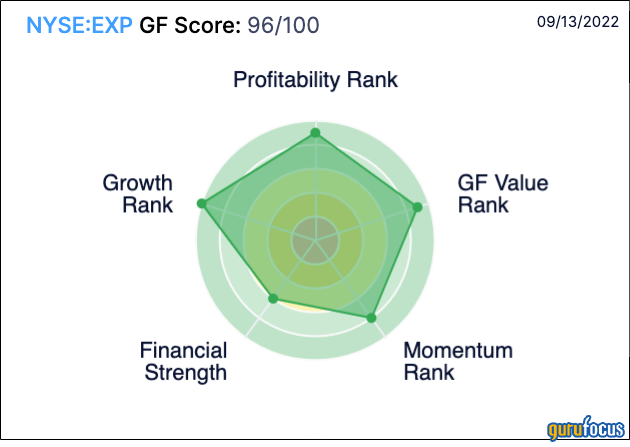 Only four gurus had positions in Eagle Materials at the end of the second quarter. The top three holdings belonged to:

While the gurus aren’t big holders, other institutional investors are, owning 93.62% of shares outstanding, while insiders held another 2.5%. The biggest stake among the insiders was that of Michael Haack, the President and CEO. As of May 19, he owned 89,542 shares.

Eagle Materials has high fundamental marks all around. It shows strength across the board, and especially for profitability and growth. Because of the recent price slump, it is available at a discount based on several measures. That may get the attention of value investors who aren’t strict about debt and growth investors who can look five or more years ahead to the next cyclical upswing. Unfortunately for income investors, there is nothing here worth noting.