The company is building its presence in a nascent industry, making it attractive to investors and big business

QUBT, Financial) stands out as a potentially excellent investment in the disruptive yet nascent industry of quantum computing.

In their nascent stage, FutureLearn.com notes quantum computers are difficult and expensive to build. The computers are error-prone and there are hardware development and stability issues. They require massive investments in cooling costs and basic infrastructure. Additionally, specialists are required to design, build and operate these computers.

Needless to say, these companies require a lot of capital in order to remain in operation. In recent years, the pace of investment has picked up among bigger companies.

One example is Microsoft Corp. (

MSFT, Financial), whose Azure Quantum service creates and runs quantum algorithms for multiple platforms at once. Alphabet Inc.'s (GOOG, Financial)(GOOGL, Financial) Google Quantum AI is developing software and hardware. Google researchers claimed three years ago they achieved quantum supremacy when their quantum supercomputer Sycamore performed in 200 seconds; the exercise was an abstruse calculation they said would tie up a supercomputer for 10,000 years. Further, International Business Machines Corp. (IBM, Financial) released its Q System One two years ago, while Nvidia Corp. (NVDA, Financial) is partnering with other companies on the next generation of computers. In August of 2020, Amazon.com Inc. (AMZN, Financial) launched Amazon Braket, which is a quantum computing service based in the cloud. By 2023, Fujitsu Ltd. (TSE:6702, Financial) will be the first company to provide research derived from quantum computers.

According to PC Magazine's Matthew Humphries, “The hope is that quantum computing can have a major positive impact in a range of fields, including chemicals, pharmaceuticals, automobiles and finance.”

New kid in the game

Founded in 2001, Leesburg, Virginia-based Quantum Computing is a newer player to the space as it was orginally established to sell ink-jet cartridges online. According to The Quantum Insider, it then became a beverages distributor in 2007.

In 2018, the company announced its decision to shift its business focus to quantum computing and revealed its new name.

Quantum Computing is now in the early stages of commercializing software tools and applications that leverage novel quantum computing capabilities for businesses, rather than focusing on hardware. Its Qatalyst program is a quantum accelerator enabling developers to create and execute quantum-ready applications on conventional computers in preparation to run on quantum computers.

The company executed its first acquisition in June. The addition of QPhoton expands its capacity to develop photonic-based quantum systems. Knowledge gained from QPhoton complements Quantum’s entropy quantum computer, Dirac. The primary benefit is that Dirac deploys at room temperature as a rack-mountable server without special infrastructure, so no underground cooling environment is required.

In an August shareholder letter, Quantum Computing CEO Robert Liscouski said he belives the company offers real-world problem-solving that puts it three to five years ahead of the competition.

“Quantum information processing for solving real-world problems is available now and this is only the beginning," he said. "World class talent will be at the center of making QCI a real force in the quantum information industry."

Total revenue for the six months ended June 30 was $96,000. Total operating expenses were $11.5 million, leaving an accumulated net loss of $12.23 million. The loss per share was 42 cents. The company has no debt.

Based on the GF Score of 40 out of 100, the company currently has poor performance potential. 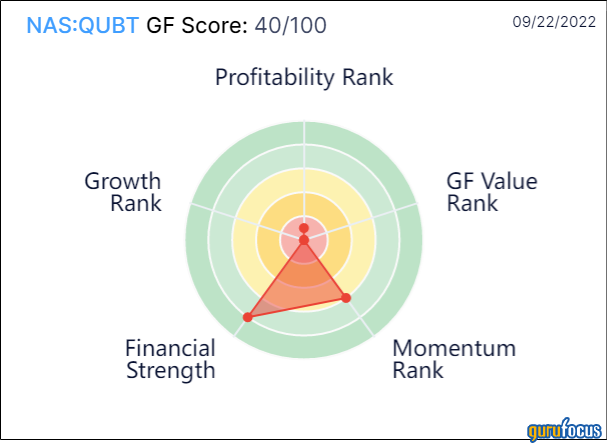 It received a high financial strength rank of 8 out of 10 and a moderate rating for momentum at 6 out of 10. The financial strength rating is arguably a bit optimistic since the company has less than a one-year cash runway. It might dilute shareholders by issuing more shares to raise money.

Quantum’s stock is more volatile than the market as its 52-week high was near the initial public offering price, hitting $8.90. The stock tumbled to a low of $1.42 in May in anticipation of the acquisition.

On Sept. 20, Quantum Computing announced the launch of Dirac1 subscription service, initiating the monetization of its research and development. The commercially available service gives web-based access to programs able to solve problems with up to 5,000 variables on an hours per month basis to a fully dedicated system.

The significant percentage of corporate ownership is a positive sign. The increase in institutional ownership suggests confidence is growing in the little company. At the end of June, Quantum Computing joined the Russell Microcap Index. Liscouski characterized the event as an important milestone. The share price has fallen more than 60% over the past year, but short interest is less than 2%.

The quantum computing industry is expected to increase at a compound annual growth rate of 35.2% by 2028. This will undoubtedly spur revenue growth at Quantum Computing. The company might be able to take advantage of government cash infusions as well.

The U.S. Department of Energy allocated $166 million over five years to nurture quantum computing capacity building and $500 million over the same period to build a nationwide large-scale quantum computing network infrastructure under the CHIPS and Science Act. America’s National Quantum Initiative kicked in more than $1 billion of other federal funds.

I forecast businesses will increasingly turn to Quantum Computing because the company offers software that is able to operate on currently available hardware; the return on equity is going to double over the next 12 months and, with adequate marketing, the stock has the potential to top $3.25 per share.

Quantum computing may appear to be a niche industry in the early throes of research and development, but it is grabbing the attention of big businesses, investors and government officials. History suggests that deep-pocket companies look to buy early assets rather than totally commit to building them. Big money flowing into the world-changing industry makes Quantum Computing’s position in the market a potentially excellent long-term investment.