Abrams previously worked for Klarman for nearly a decade before starting his own firm in 1999, so it comes as no surprise that their strategies, not to mention a few of their investments, might occasionally align.

Klarman’s hedge fund searches for value among a broad range of opportunities, including stocks, distressed debt, liquidations and foreign securities. With a long-term horizon, the renowned investor typically seeks securities trading well below his estimate of intrinsic value and waits for the price to rise. Baupost manages about $31.6 billion in assets.

As for Abrams, the former protégé takes a fundamental, value-oriented approach to stock picking, investing in a fairly concentrated number of securities. His firm seeks to identify long-term opportunities among a wide variety of asset types in both foreign and domestic markets. He also prefers companies in which the CEO has a significant stake, or where the executive’s salary is primarily stock-based.

According to GuruFocus’ Aggregated Portfolio, a Premium feature based on 13F filings, the two gurus both have positions in Nuvation Bio Inc. (

During the three months ended June 30, Klarman trimmed his stake in Nuvation Bio (

NUVB, Financial) by 0.24%, while Abrams left his position unchanged. They have a combined equity portfolio weight of 0.83% in the stock.

The San Francisco-based pharmaceutical company, which develops novel therapeutics to treat different types of cancer, has a $437.58 million market cap; its shares were trading around $2 on Fridaywith a price-book ratio of 0.58.

Since its public debut via a combination with a special purpose acquisition company in March, the stock has fallen close to 60%.

Due to the lack of data, the GF Score of 22 out of 100 may not be a good indicator of the company’s performance potential currently. 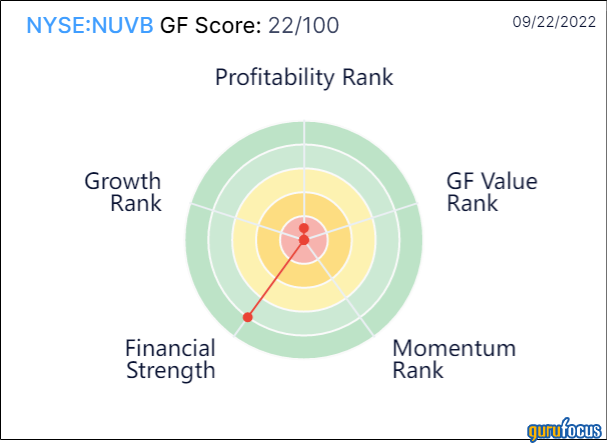 GuruFocus rated Nuvation’s financial strength 8 out of 10, driven by a comfortable level of interest coverage. The Sloan ratio is indicative of poor earnings quality, however.

The company’s profitability did not fare as well, scoring a 1 out of 10 rating on the back of negative margins and returns on equity, assets and capital that are outperforming versus competitors.

GuruFocus estimates Klarman has lost 61.20% on the investment, which he established during the first quarter. Similarly, Abrams has yielded a 61.32% return over the same period.

Of the gurus invested in Nuvation Bio, Klarman has the largest stake with 4.77% of its outstanding shares. Abrams is second with 1.75%.

META, Financial) holding by 28.98% during the quarter, while Abrams left his investment unchanged. Together, they have a combined equity portfolio weight of 6.87% in the stock.

The social media company formerly known as Facebook, which is headquartered in Menlo Park, California, has a market cap of $371.65 billion; its shares were trading around $140.71 on Friday with a price-earnings ratio of 11.73, a price-book ratio of 3.03 and a price-sales ratio of 3.30.

The GF Value Line suggests the stock is significantly undervalued currently based on its historical ratios, past financial performance and analysts’ future earnings estimates. 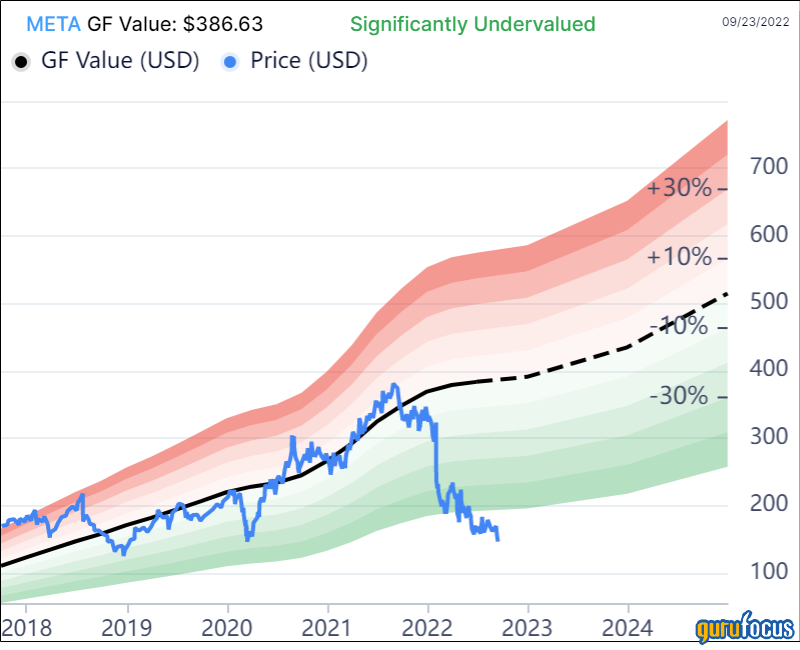 Further, the GF Score of 92 out of 100 indicates the company has good outperformance potential, driven by high ranks for profitability, growth and financial strength and middling marks for GF Value and momentum. 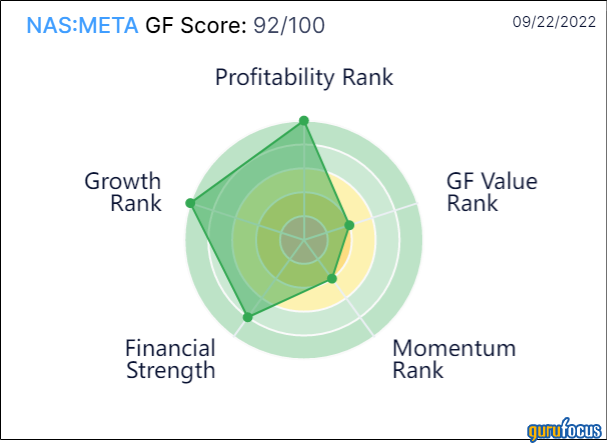 Meta Platforms’ financial strength was rated 8 out of 10 by GuruFocus due to adequate interest coverage and a high Altman Z-Score of 7.50 that indicates it is in good standing. The return on invested capital also eclipses the weighted average cost of capital, so value creation is occurring as the company grows.

The company’s profitability fared even better with a 10 out of 10 rating. Despite recording a decline in its margins, Meta is supported by strong returns that outperform a majority of industry peers. It also has a moderate Piotroski F-Score of 4 out of 9, indicating conditions are typical for a stable company. The 4.5-star predictability rank is on watch even though the company has recorded consistent earnings and revenue growth. According to GuruFocus research, companies with this rank return an average of 10.6% annually over a 10-year period.

GuruFocus data shows Klarman has lost an estimated 2.45% on the investment so far, while Abrams has lost approximately 6.13% since the fourth quarter of 2018.

With a 0.44% stake, Dodge & Cox is Meta’s largest guru shareholder. Other top guru investors include

WTW, Financial) by 24.70% during the three-month period, while Abrams left his stake unchanged. The stock has a combined weight of 8.38% in their portfolios. 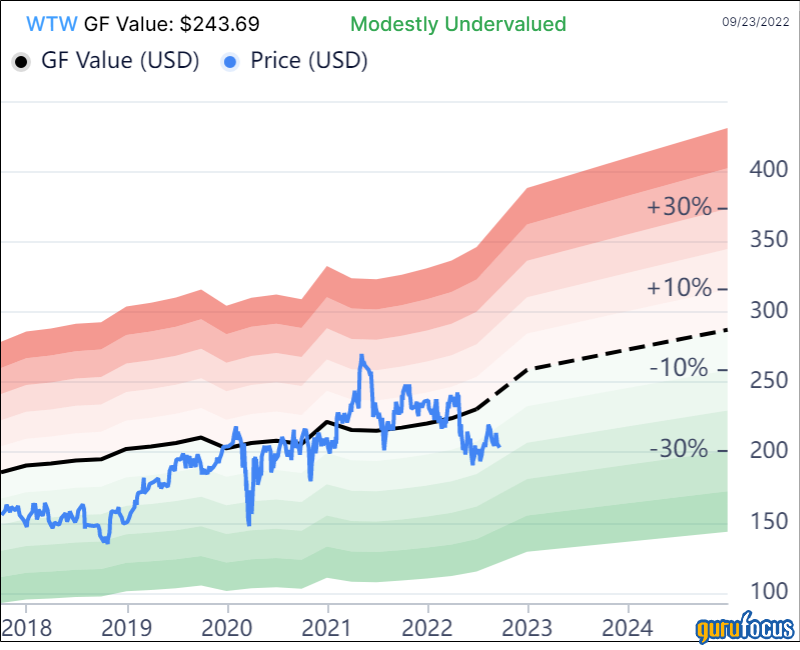 The GF Score of 82 indicates the company has good future performance potential, having gotten high grades for profitability, GF Value and momentum and middling marks for growth and financial strength. 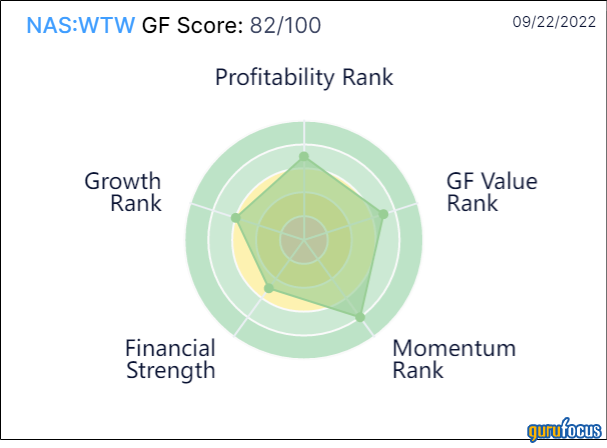 GuruFocus rated Willis Towers Watson’s financial strength 5 out of 10. Although the company has sufficient interest coverage, the low Altman Z-Score of 1.28 warns it could be at risk of bankruptcy. The company is also struggling to create value since the WACC exceeds the ROIC.

The company’s profitability scored a 7 out of 10 rating, driven by operating margin expansion and strong returns that top a majority of competitors. Willis Towers Watson also has a moderate Piotroski F-Score of 6 as well as a one-star predictability rank. GuruFocus found companies with this rank return, on average, 1.1% annually.

GuruFocus says Abrams has gained about 60.03% on his investment, which was established in the fourth quarter of 2016. As for Klarman, he has generated a 0.41% return since opening the holding in the first quarter of 2021.

First Eagle has the largest stake with 4.39% of the company’s outstanding shares. Barrow, Hanley, Mewhinney & Strauss and

Klarman’s $6.74 billion equity portfolio, which was composed of 52 stocks as of the three months ended June 30, is most heavily invested in the communication services and technology spaces.

Abrams’ $3.72 billion equity portfolio, which was composed of 18 stocks at the end of the second quarter, is largely invested in the consumer cyclical sector.